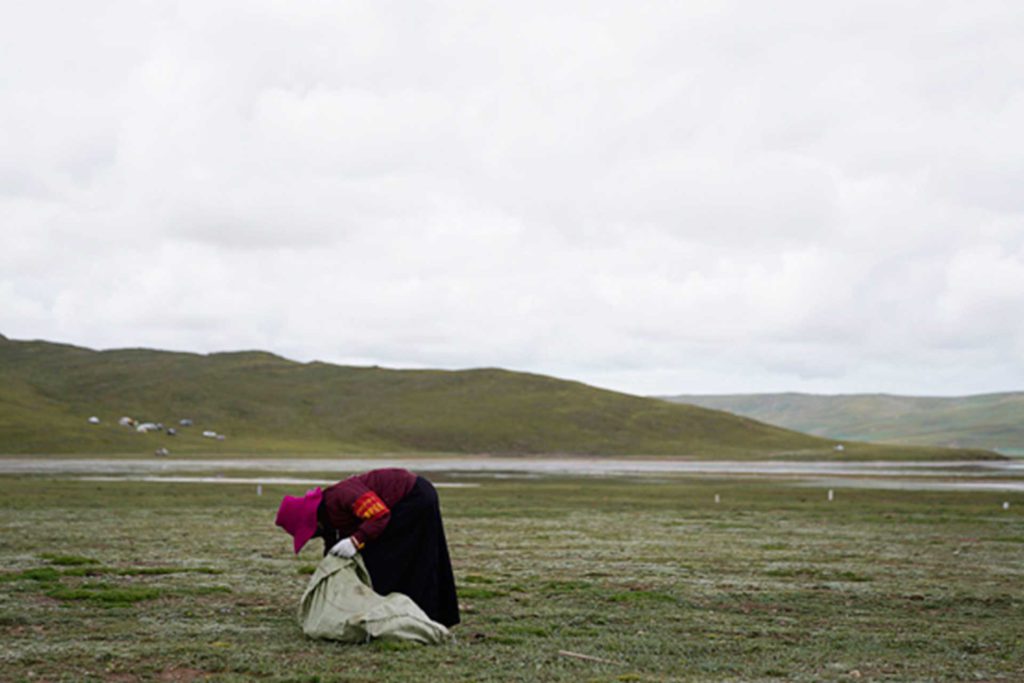 Mass tourism, urbanization, and the absence of governance on waste management in rural areas have transformed Tibet, which has been dealing with a garbage crisis

The issue of poor urban waste management in Tibet

The mountainous region of Tibet had never dealt with a garbage crisis until a couple of decades ago. Up to about twenty years ago, the chief form of waste present in the region, domestic waste, was managed through its utilization as manure for farm use. Since then, the consequences of poor urban waste management have become a prevalent issue in Tibet. Rapid urbanization and the associated increase of construction works, the advent of mass tourism in the region, and the absence of governmental waste management in rural areas have changed the face of the Tibetan Plateau, the highest in the world, which has been affected by widespread littering. This garbage crisis is still in its onset, but if unmanaged and unresolved, it has the potential to bring about further social and environmental consequences. Tibet or Bod (བོད་) in Tibetan, is an East Asian region and the chief location of The Tibetan Plateau and the Himalayas, a mountain range whose highest elevation in Tibet is Mount Everest, our planet highest mountain reaching 8,848 meters above sea level. The Plateau is the source of rivers located in East, Southeast, and South Asia, such as the Indus River, the Yangtze, and the Yellow River. Tibet is dotted with high-altitude lakes, including Qinghai Lake, Lake Manasarovar, and Yamdrok Lake. In 1950, there were 340 million cubic meters of forest in the Ngaba Tibetan Autonomous Prefecture, and by 1992, the number decreased to 180 million cubic meters. Between 1950 and 1985, Tibet’s forest cover went from 25.2 million hectares to 13.57 million hectares. This decrease is due to the deforestation caused by Chinese industrial timber extraction. Tibet has an area of around 2,500,000 km2 bordering India, Nepal, Bhutan, Burma, Eastern Turkistan, and China.

The region has been inhabited for thousands of years. Mitochondrial (mtDNA) genome evidence revealed that there is a degree of genetic continuity between the Late Paleolithic settlers on the Tibetan Plateau and the modern Tibetan population (Zhao, Mian, et al., 2009). King Songtsen Gampo reunited Tibet under its rule (b. 620 CE) and promoted Buddhism. At the time of the reign of King Trisong Deutsen (755-97), the Tibetan Empire reached its apex, invading China and other Central Asian countries and seizing present-day Xian. Different dynasties ruled the region until 1642, when the Fifth Dalai Lama, Ngawang Lobsang Gyatso, assumed both spiritual and secular authority over Tibet. As a result of the Xinhai Revolution (1911–12), which put an end to China’s last imperial dynasty, the Manchu-led Qing dynasty, the Chinese troops mutinied against their officers and attacked the residence of the Amban, the representative of China’s Qing emperor. In 1912, the Tibetans overcame and then expelled the Chinese troops from Tibet, putting an end to the Qing Dynasty’s influence over the region. In 1950, the army of the People’s Republic of China invaded Tibet. The Seventeen Point Agreement, which granted the Tibetans religious freedom and the right to exercise national and regional autonomy under the PRC’s leadership and included a point establishing the presence of a military and administrative committee in Tibet, was signed by Tibetan representatives in 1951. On 10 March 1959, a popular uprising against the Chinese occupation took place in Lhasa. Thousands of Tibetans were killed, and tens of thousands were forced to flee the country, including the Dalai Lama, who on 17 March 1959 left the capital to seek political asylum in India, where he established the Central Tibetan Administration (CTA), a Tibetan government in exile. In 1960, the International Commission of Jurists concluded that there was sufficient evidence to accuse China of an attempt to destroy Tibetans as a religious group, an action falling within the definition of genocide and that Tibet was at the very least a de facto independent state when the Tibetan delegation signed the Seventeen Point Agreement. 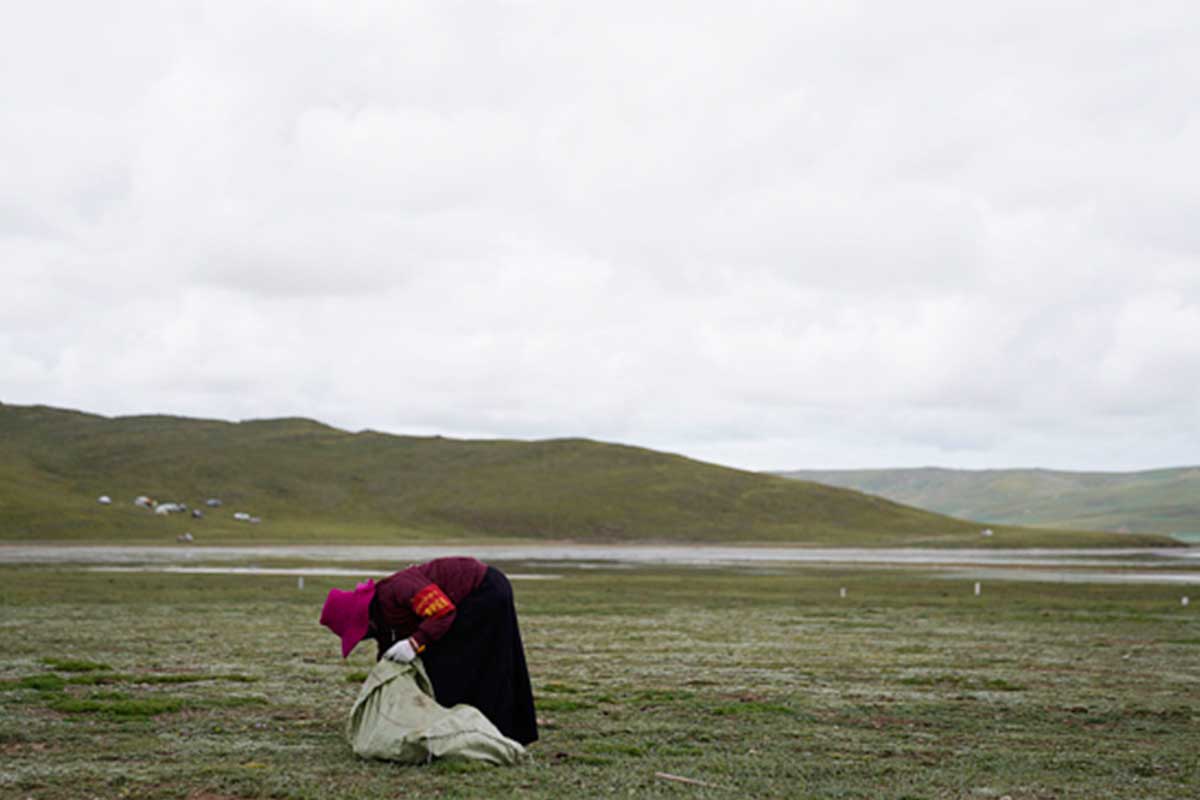 1/7 A woman picks up garbage by a road in the Sanjiangyuan Natural Reserve in Madoi county, Northwest China's Qinghai province, Aug 22, 2017. Photography VCG

The real cause behind Tibet’s garbage crisis

«The garbage crisis in Tibet is a recent issue that started sometime around the year 2000, and escalated between 2010 and 2015 due to the rapid urbanization, the mass influx of tourism and increasing construction that have been taking place in Tibet». Said Tempa Gyaltsen Zamlha, Environment Researcher and Deputy Director of the Tibet Policy Institute, Central Tibetan Administration. In 2010, the amount of municipal solid waste (MSW) generated in the capital city of Lhasa was 600 t·d−1 (Dan and Han, 2012). By 2020, MSW generation in Tibet was expected to reach 4942 t·d−1 (Jiang et al., 2009). «Before 20 years from now, Tibet had never experienced a garbage crisis, as a cold country with a small and scattered population. Since Tibet didn’t have a large population and large settlements concentrated in one particular area, there wasn’t a significant amount of garbage concentrated in one spot. The everyday domestic waste produced in different parts of Tibet was employed as fertilizer as the majority of it wasn’t plastic or metal waste. In recent times, most small Tibetan towns have been growing into cities, and with the increase in urban population, there has been a parallel increase in urban waste generation, which the Chinese government has not well managed. Tibetans are concerned about this issue, and as a result, the monasteries, small organizations, and the general public have started forming small environmental groups to collect the garbage. Because of the poor waste management in Tibet, rubbish has been either flushed into the nearby rivers, discarded in the natural environment, or burned. In Tibet, we used to be able to drink from any river, as there was no pollution at all. In recent years, that hasn’t been the case any longer». Explained Gyaltsen.The presence of landfills can affect groundwater quality. The groundwater quality in the proximity of landfills was rated as ‘very bad’ by a total score (FI) of 7.85 by the Grading Method in China, with ninety-six groundwater pollutants detected in groundwater near landfill sites in China (Han et al., 2016). Due to the lack of governmental waste management the practice of dumping domestic waste into garbage pits for open burning and into landfills has become widespread in the rural areas of Tibet. This poses potential environmental and health risks as the combustion of materials like plastic releases toxic chemicals such as nitrogen oxides and volatile organic compounds (VOCs) that pollute the air. «China has encouraged mass tourism in Tibet, and according to a Chinese report in 2017, Tibet received 25 million tourists in a year in 2017». Tibet’s tourism revenue in foreign currency reached 279.070 USD mn in 2019, and in the same year, the foreign visitors’ arrival data was reported at 369.100 Person-Time th (CEIC). «Another new environmental issue in Tibet is plastic. China is a large economy, and most Chinese tourists who visit Tibet are middle or upper-middle class. So they have enough money to buy products, and most of them are packaged in plastic. Releasing the packaging that wraps products into the environment can cause severe plastic pollution».

Lampoon reporting: the issue of plastic pollution in Tibet

In 2020, China’s gross domestic product (GDP) amounted to around 14.72 trillion US dollars (World Bank).  In 2019, the average Chinese generated 18 kg of single-use plastic (Plastic Waste Makers Index, published by The Minderoo Foundation). China is the world’s largest plastic producer, manufacturing about one-third of the global plastics, amounting to about 7.23 million tons (March 20121) for a revenue of over 468 billion U.S. dollars. A study conducted by scientists from Cornell University and Utah State University showed that plastic pollution is airborne, too, as microplastics are being transported across continents by the wind (Brahney, Mahowald, Prank, et al. 2021). These microscopic plastic fragments are traveling the world in a spiral, as part of a cycle that resembles that of natural chemical elements such as calcium (Ca), carbon (CO), hydrogen (H), and oxygen (O) which circulate through the Earth’s compartments via biogeochemical cycles. «Almost all parts of Tibet have been experiencing some form of garbage crisis in recent years. But there are differences between the areas that are less visited by Chinese tourists and the ones that are tourist attractions. China has designated a set of areas as tourist spots, and where there is a large number of Chinese tourists visiting, there is more waste. The Chinese government has set up some waste management facilities, but the majority of them are located in cities and towns where there are large Chinese settlements. As soon as you move away from urban areas, you’ll see discarded plastic carried by the wind or washed ashore as waste management is unavailable in the country’s rural areas. China has the means to invest in waste management in Tibet. Proper waste processing facilities need to be set up, and complete comprehensive mechanization is needed. The Chinese government officials and the Tibetan public should both be sensitized and made aware of the garbage issue and related risks, and tourists coming into Tibet should be better managed from an environmental standpoint. The garbage crisis in Tibet is in its early stage, and it can be fixed, but if unmanaged, this situation will get out of hand in the next five years».