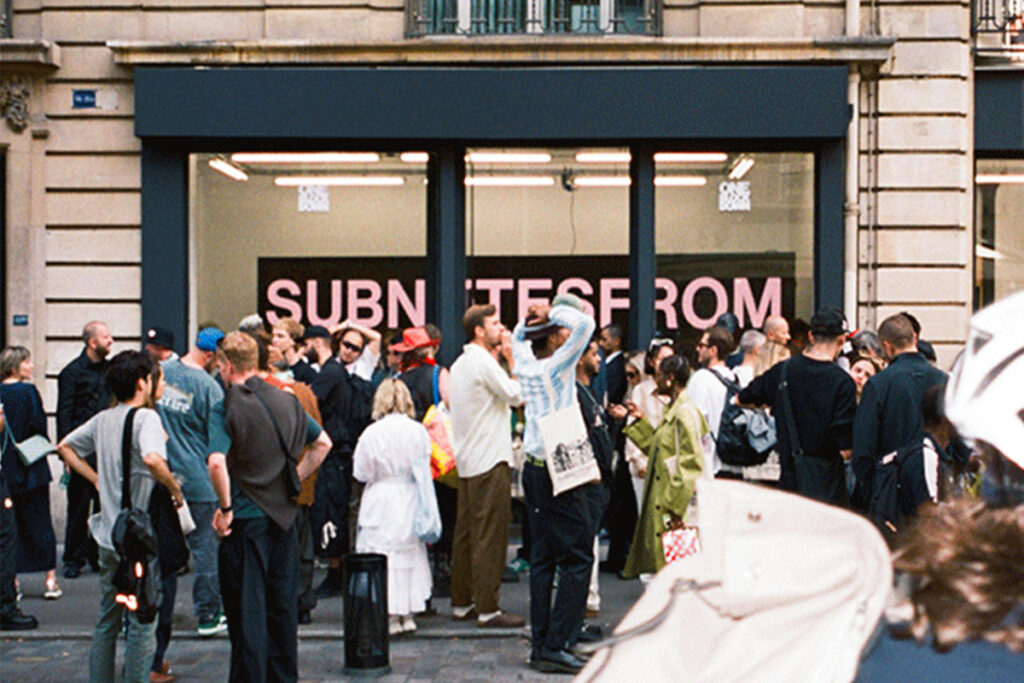 One Block Down launches ‘SUBNOTESFROM’ at their new Parisian hub

Continuing One Block Down’s quest for educating and sparking curiosity,  SUBNOTESFROM via an event at their new Paris boutique

One Block Down presented a collection of five publications, titled ‘SUBNOTESFROM’ from their new Paris store in late June. These publications were developed in collaboration with contributors and content creators Sabukaru, Samutaro, Contemporary Standard and Otto Resource.

Founded in 2009, One Block Down has accumulated a vast editorial archive, driven by curiosity, the desire to educate and as a medium to speak to the youth of today. As of 2022, One Block Down has become a central location for those eager to explore the past, in order to understand how it has shaped where we are today, and how to continue to influence the future.

One Block Down – the Parisian exposure

One Block Down allows for dialogues within communities and subcultures to encourage expansional thinking via creative routes. As the platform continues to expand throughout the world, so does their physical presence. Currently, there are 3 store locations, 2 of which are in Italy and their brand-new space in Paris, France. Their first store is located right around the corner from the Duomo di Milano in the city center of Milan, while the other is located amongst the cobblestoned streets of Rome between the Spanish Steps and Piazza del Popolo. Now, there is a new store situated in the Third Arrondissement of Paris. This new space is meant to expand and serve One Block Down’s mission to encourage new generations to explore and embrace subcultures.

To commemorate the store opening, One Block Down hosted an event inside their new Parisian store on the 24th of June to launch the release of their ‘SUBNOTESFROM’ project. The project consists of a collection of 5 books and each book will entail a detailed cultural analysis and exploration by highlighting a specific subculture from a chosen country around the world. The 5 countries of the project consist of Brazil, Nigeria, Japan, USA, and the UK. Throughout this endeavor, One Block Down and its partners sought out to unite anecdotes, diverse point of views, and facts from different continents to present stories regarding a contemporary subculture and its impact around the globe. The content takes you throughout the respected subcultures’ history and how it radiated worldwide.

In Paris, One Block Down invited the people that helped enrich the content through interviews and photographs to take part in the event and celebrate the opening. “Meeting the point of knowledge, understand, and appreciation for those who came before us, the originators, of the different cultural movement that shapes us” is the essence of One Block Down. It can be described as a platform that highlights commonalities and conglomerate people via digital and physical spaces.

‘SUBNOTESFROM’ presents an insider view into the modern subcultures that have given light to the current cultural climate. The collection of narratives offers in-depth research and interviews with members and leaders of these movements to provide as much authenticity as possible, while allowing for a deep understanding of these societies. 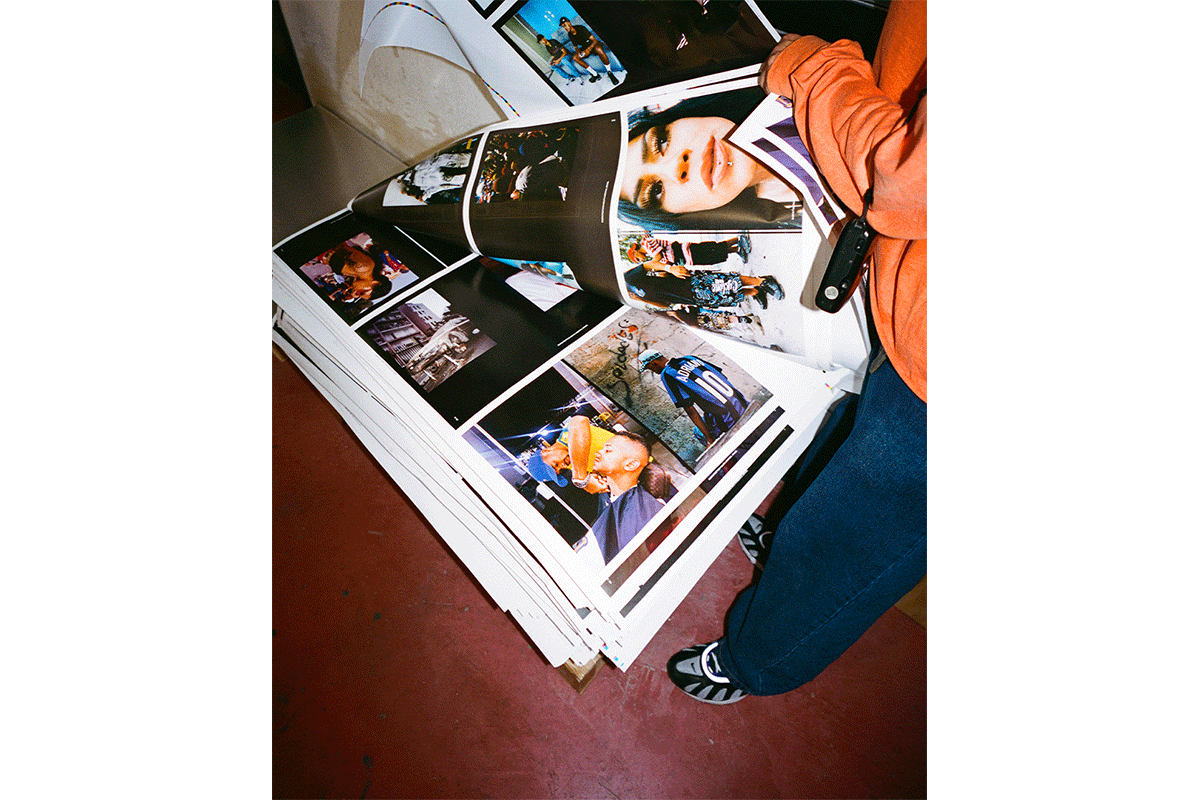 02/07 SUBNOTESFROM in the making, One Block Down, Paris

Africa – A look into Nigerian subcultures  portrayed by  Samutaro

In recent years, Nigeria has received heaps of attention from global audiences, only giving fuel to their unique culture. Due to various artists, composers, and literary intellectuals, along with a Nobel Prize sprinkled about, Nigerian art is the gateway to Western Pop Culture. On the other hand, the world is only scratching the surface. Most are unaware of the incredible cultural wealth and diversity that Africa’s most populated country has.

Nigeria is currently experiencing a cultural revolution, brought on by up-and-coming artists that aim to challenge the norms to unleash their bursts of artistic energy. In this case, the younger population represents the majority of the country’s overall population, and they are aspiring to disrupt the deep-rooted religious traditions and ways of thinking that conservative politicians and elders would like to maintain prevalent. By shining the spotlight on Nigeria’s subcultural movements, there’s an underlying motivation to shatter the glass to an unlimited range of possibilities to showcase how youth cultures are modifying history through creativity.

In this book, Otto Resource will take us through North America’s “Freaknik”. It was an annual party in Atlanta, Georgia that took place from 1982 to 1997 and was entirely concentrated around African American musical from at the time contemporary genres, such as R&B and Miami Bass. During its height, Freaknik attracted so many visitors that a good bit of their festivities took place in the street. Festival goers could be seen dancing carelessly on cars and enjoying where they were at in that moment, forgetting the world around them.

Within ‘SUBNOTESFROM’, readers can find information about the rise and fall of this subculture, how the codes generated its iconography and how they evolved into mainstream channels of today. Freaknik helped to understand a methodology for how a subculture begins, how they re-shape cultures and what they really are.

Asia – Japan’s marriage of traditions and Western culture, as told by Sabukaru

This book focuses on how Japan continues to implement Western styles and subcultures to reimagine and modify them according to Japanese ideals. After centuries of solitude, Hakoku left their mark on society, along with how ideas could be created and further constructed. Japan’s desire for innovative foreign influence was apparent, even more so during the 70’s, as imported goods were connotated to coolness, contemporary, and in-the-know. These exclusive items from the West were rare and doubled as a status symbol, along with indicating education and class.

As these rarities entered the household of the Japanese, along came intangible subcultures. However, there was one barrier – the English language. The Japanese therefore had to rely on information found in magazines or reinterpret Western items with their own distinct Japanese point of view that resulted in a fresh, remixed subculture.

Readers can educate themselves on how this phase caused Western subcultures to be remixed by the Japanese, resulting in the renaissance. Street happenings and fashion were therefore reimagined by the Japanese. The newfound subculture aimed to raise eyebrows for the West and were redone by celebrities, coming full circle, along with highlighting the current generation of Japanese youth that are blending Western inspirations with a Japanese twist.

South America – With a focus on Brazil, this one country is interpreted by 3 local talents  by One Block Down

Sure, Brazil is known for white sandy beaches, the dark corners of the favelas, and the rainforest. But here, the reader can deep dive into the contemporary communities and subcultures that have been self-defined as ‘Sportlife’. They can be described as a new lifestyle and identity that goes beyond aesthetic, it unifies external influences, local cultures, and global trends to create something never seen before. Even from Brazil, it’s influencing the world thanks to storytelling and social media.

Fernanda Souza, Samir Bertoli and Neguinho da Favela are 3 local talents that interviewed for the book. The trio were able to, in their own rights, have a genuine first-hand view on the movement, how it started, the influences, and what lies in the middle, combined with an exploration of the cultural journey that gave life to this movement.

Imagine Liverpool, Manchester, and London in the 1980’s, there isn’t anything all that new. The Casual Cultures associated with the working class and its way of acting and dressing in their own way was mainstream, as it happened before with the links of Skins, Teddy Boys, and Punks. These distinct groups of individuals channeled their feelings of rage and disappointment with society via a companionship resulting from a sudden interest in fresh music genres and the appropriation of clothes that belong to opposite groups.

This pattern worked for subcultural expressions; however, the element of music was replenished by an unconditional love for soccer. Music was of course a part of the culture, but not speaking of a specific genre or through one band or artist that embodied the soul of the movement, it was a soundtrack consisting of techno, new wave, and rap, amongst others. This growth towards a variety of genres and the ability to adapt to contrasting sounds is why the culture still survives today.

Bands come and go, but the love for a team is forever. The energy of these teams is pumped by Europe, as the success of several English teams went viral globally, giving way to a hyped-up local scene on a global platform, where each country interpreted each team in their own way. The diffusion of casuals not only made its way across geographic borders, but sept down into cultural sceneries allowing for the movement to multiply, adapt, and thrive. Soccer fans blended in at raves, clubs, bars, leaking into the grime and graffiti until pop culture adopted football elements as parts of their uniforms. The agenda came full circle from scallies (aka, young trouble causing boys) wearing the latest trends to attend matches, to fashion wearing uniforms on runways globally.

To mark the opening of the Parisian store along with the release of ‘SUBNOTESFROM’, the event offered a single space for the One Block Down community to come together and expand their infinite exploration to a deeper connection to something far greater.

One Block Down – Paris