Dr. Henry Crichlow, CEO of Nuclear SAFE, on the patented technology he invented. He believes it could bring the nuclear industry forward on the disposal side

Whilst the generational side of the nuclear industry is well developed, the other side regarding disposal, has not.

Lampoon spoke with Dr. Henry Crichlow from NuclearSAFE who created the SuperLATTM. It is a patented technology invented in 1996. They thought it was this that would bring the industry forward.

«Our idea was to utilize our knowledge on the matter to create a specialized type of very deep wellbore, or borehole. It is drilled vertically from the surface into a selected disposal zone. Then, turned in a horizontal position, sideways, into the selected rock formation. We drill it further for several kilometers more into the disposal zone. This makes a long empty volume in the rock in which we store the nuclear waste inside steel capsules. They lie horizontally just like in a warehouse on the surface».

They drill a vertical wellbore down about 15,000 feet (5,000 meters) below the surface. Then they use engineering technology that is the ‘brainchild’ of the oilwell drilling industry. Also the patents from Dr. Crichlow studies. With this, they turn the drill from the vertical to horizontal direction; for a further 10,000-15,000 feet into the selected zone.

The securely stored waste is placed in this horizontal hole that behaves like a “tube.” They load the waste capsules from the drill rig system on the surface and then sequestered in the horizontal section.

They fill the 15,000 foot long horizontal ‘tube’ with about 500 capsules weighing 1,000,000 pounds (500 metric tons). Then, they seal the horizontal wellbore with plugs, packers, and a preventative medium of cement and other proprietary slurries.

«Our technology works because it has been continuously tried and performed all around the world. In a typical year, the technology that we designed for nuclear waste disposal is used safely and economically; drilling more than 200,000,000 feet (62,000,000 meters) of horizontal wellbores each year in the USA. This technology is valid and I don’t have to test it. We made thirty different patterns trying to improve the process. We are now doing demonstrations in the US and possibly in Europe».

Made from a steel body that carries it, almost like a container, the capsule would have an inside that consists of copper. Crichlow says it’s a cheap material, doesn’t rest easily, and will last a long time.

«The capsule only has to last about ten thousand years. After that, the waste is completely neutralized; like a block of cement or resting iron, it has no more potential to create radioactivity. Inside that copper tube, we would put the fuel from the power plant itself. It’s called an assembly, and around it, there’ll be some space filled with a protective medium. This is a combination of special products, chemicals and carbon nanotubes that we have developed, and that would form a nice package. That capsule will be put inside the wellbore and it will hang a special tool that will allow it to be put right down the wellbore and go into the lateral and it will remain in place. We then do a second capsule to stick behind the other. When we have them in place within this lateral system, we then fill the system with another protective media. It is like a special type of cement and we can completely isolate the material in the ground from the surface. On the surface, we put a marker that says ‘Do not disturb for 10 thousand years’». 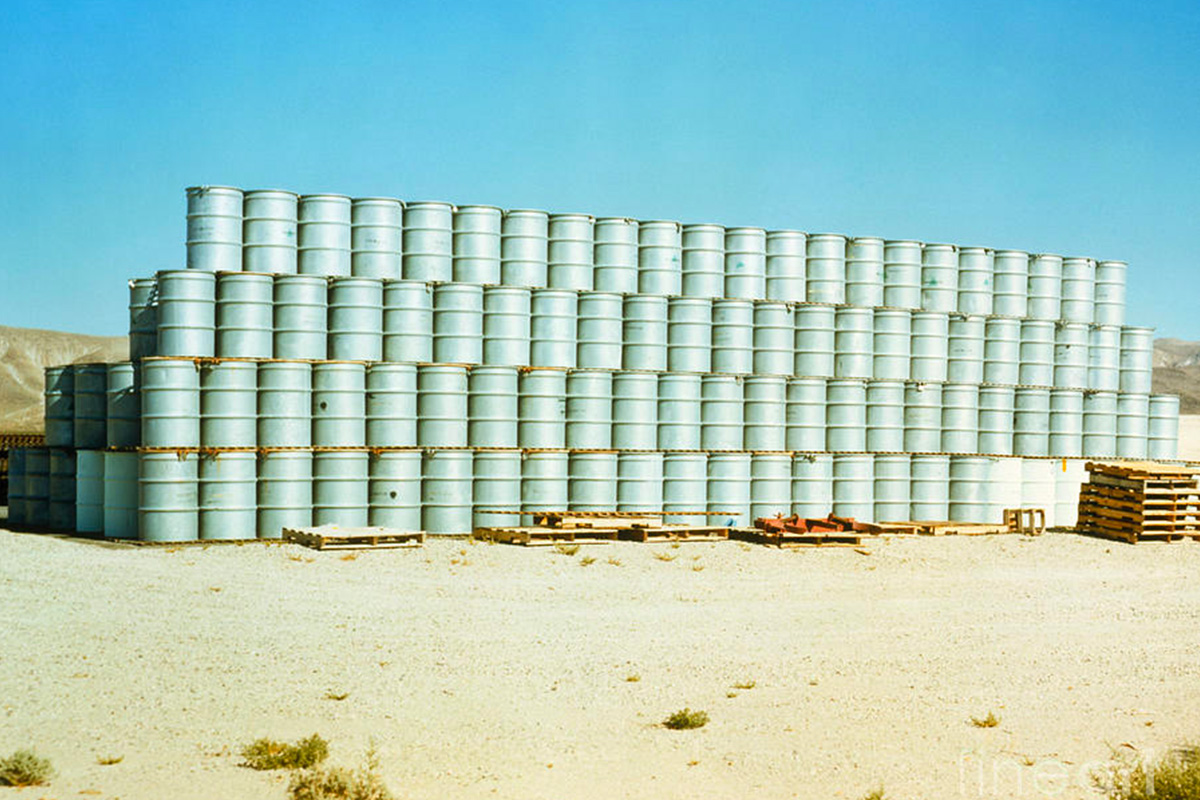 Right now, anywhere in the world,  companies are producing oil and gas from buried zones between 10 to 100 million years ago.

Those zones were once closed and kept their oil and gas in place. The materials didn’t get to the surface until they drilled the first well.

«The process resembles the analogy of putting a straw into a glass filled with liquid, that would allow the fluid to come out», explained Dr. Crichlowm.

«Without the need or the existence of a connection, you wouldn’t get any of that gas and oil which was laying there for millions of years. So if we reverse this process, we can find a zone that we know has been completely closed off forever, and go back to it to dispose of the waste».

The major problem at a global level is the lack of technical excellence. This is why the water table has been contaminated, by people and oil and gas companies.

«We know that we won’t contaminate the water table, for two reasons. The first reason is that we are operating as many as three or four km below the water table. There’s no conceivable way in which waste in a capsule will get from the water table to the surface. Unless, there’s a breakdown in the wellbore (which is completely sealed with 10 thousand feet of cement, another material just as strong or even stronger than the earth through which it has been drilled). Also, before the first extraction of oil as a product, happened in 1865 Pennsylvania, the material remained in place for millions and millions of years until a wellbore disturbed it. So, when we go back and put the waste deep enough in the ground, it’s never going to get to the surface. We have it disposed of so far underground that nothing on the surface will ever be affected.  It is not only below the water table, but many thousands of feet below the water table, in zones that we can determine scientifically (through radio-isotope dating) to have been closed by testing any fluids that may exist in these zones and which have been determined to be closed for millions of years».

The reasons why this technology can work

When they use this system, the waste is retrievable, meaning that it’s not lost forever. «When we stick it into the ground, we can come back in twenty, forty, even a hundred years. We can remove the waste from the capsule and take it to some location. Ideally, where the technology of the future will allow us to reuse that waste for further waste reuse. Maybe, our children or grandchildren will have the technology to re-propose it».

Dr. Crichlow is considering SuperLAT to be a long term project that can ensure completely safe storage of nuclear waste. Possibly, leaving it undisturbed for hundreds of years.

It is a complete change in attitude, direction and the way we think about waste. Nuclear sites, and nuclear waste in particular, have a lot of potential. For this reason, and for obvious environmental reasons, it’s not the typical waste to throw away.

The system is fully functioning on its own: «We don’t need to have a whole enterprise, or a town built on the surface to do the managing or people working underground. We need less than thirty people, it’s fully robotic and can move from initial to completion in less than one hundred days».

This technology provides a means whereby the nuclear energy industry can solve the waste problem. In particular, by safely disposing of their accumulating, massive and dangerous waste products in a deep geological repository. This is the alternative than in a shallow near-surface zone as some have decided to use in Europe, Canada, and the USA.

Furthermore, this system is cheaper: millions rather than billions USD to deploy, quicker to implement, months rather than decades to design and put in place, multiple repository systems can be easily drilled at many different sites, and they may be drilled simultaneously.

The time of implementation is less than one year, while costs may vary depending on the type of waste. The US Government has set a benchmark price of $1,000,000 USD per metric ton of disposal.

The risks carried by this procedure

Risks associated with drilling the repository are minimal or non-existent. This is because the areas of interest for drilling the disposal repository don’t contain high pressure gas or oil deposits.

There is some risk in the transport of the capsules from the power plant to the disposal site. However, the massive regulatory and safety precautions during land transport minimizes this.

In the event of an operational failure in the wellbore section, the waste capsule can easily be retrieved and re-transported back to its cooling pond to remain safe until the event is resolved. There is no risk of a buried capsule, cemented in a deep impermeable zone at great depth, being able to migrate its contents to the surface.

In the event of an earthquake, for example, the deeply buried capsules are well protected from any tectonic shift by the overlying and underlying zones. The capsules shall remain intact without any damage.

To solve the waste issue, the first thing the industry has to do is to re-realize that without the solution, nuclear energy will not reach its potential.

«We have got to find a way to connect both sides, generation and disposal. They don’t communicate with each other. The industry itself needs to realign and be at the same level of communication. They have to agree that nuclear waste is viable. Near surface disposal is exactly like throwing trash onto your patio. It’s not going anywhere and it will certainly cause a problem», declared Crichlow.

The future of nuclear energy would be brighter if the use of new available technology is used to fix the problems at the ‘backend’ of the power generation; economically, timely and with little disruption of the lives and livelihoods of the people on the planet. The ‘frontend’ is working, however, the “backend” has been lagging until now. It needs to change.

CEO of Nuclear SAFE. He has created and patented a technology that could ensure safe underground storage of nuclear waste.