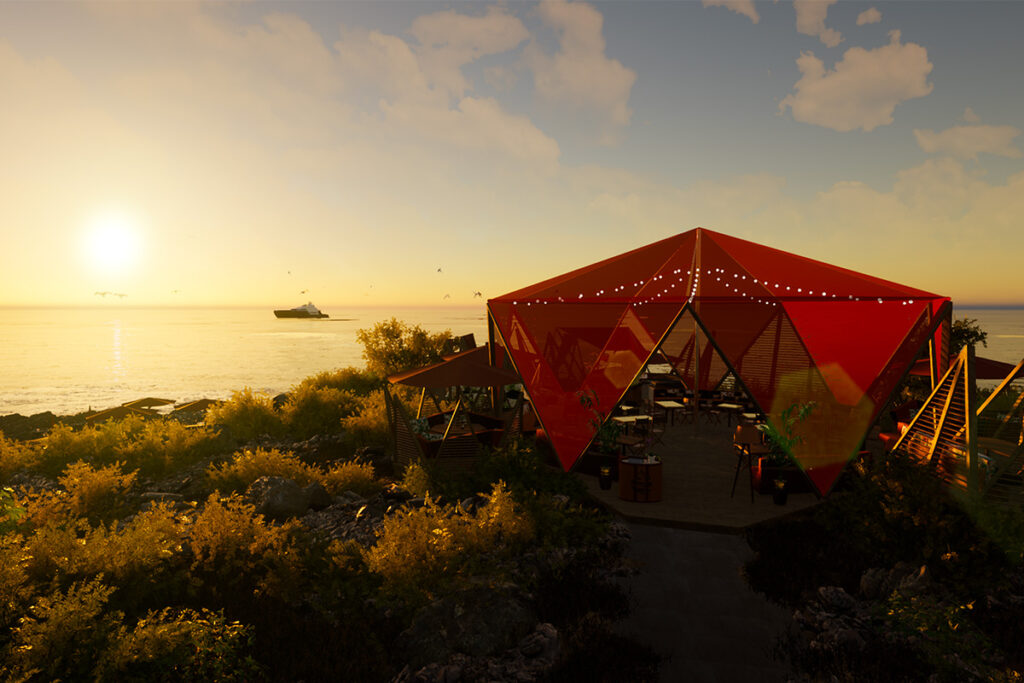 7Pines, a sustainably renovated resort for an all-around experience of Sardinia

With the rural hinterland behind, Hyatt’s new resort enhances and promotes Sardinian multi-faceted identity while contributing to preserving it

In July 2022 7Pines, affiliate of Destination by Hyatt, is inaugurating its second European – after Ibiza – and first Italian resort. Located in Baja Sardinia, a bay on the northern coast of Sardinia, just in front of La Maddalena island. the new 7Pines Resort features a five-star hotel with seventy-six rooms (including eight junior suites and twenty suites). Moreover, it is equipped with: a private beach, four secluded coves, Mediterranean gardens, three restaurants, five bars, a spa and a private dock with its own fleet of yachts.

7Pines, in the person of Managing Director Vito Spalluto, will introduce Hyatt’s concept of «laid-back luxury» to Sardinia. Described as a «loosened idea of luxury», it aims at making guests relax, while involving them in a variety of experiences reflecting the peculiarities of the local territory.

«We are never behind a desk. We are with the guest. The capacity of anticipating people’s needs and requests should be taken for granted. In my opinion, luxury today means being able to arouse in our guests desires they did not know they had and help them discover new passions».

With a twenty-year career in Italian hotellerie – working in Tuscany, Sicily, Apulia and now Sardinia – Vito has made «’going the extra mile’ a routine, always seeking to exceed the guests’ expectations». In order to achieve this goal, the training of the staff «has been focused on emotional intelligence and empathy».

Code word: local – «You can breathe Sardinia in everything we do»

7Pines Resort Sardinia wants to celebrate the Italian island and its characteristics. Therefore, it reused the structure of a previously existing resort and renovated it in a sustainable way, by using only local raw materials. Most of the buildings are made of Sardinian stone, mainly granite and Orosei white marble, which derives its color from the inclusion of fossils of shells, corals and other organisms.

All the interiors are also a tribute to the history of Sardinia, especially to the Nuragic civilization, which was native to the island between the Bronze Age (Eighteenth century BC) and the Roman conquest (Second century BC). An example may be found in the resort decorations, which recall the «pintadera», a kind of stamps, either made of ceramic or terracotta, used by the ancient inhabitants of the island to adorn their fabrics, bread and even bodies. These motives are combined with other handcraft products typical of the island, such as Samugheo textiles, enameled ceramics, wicker baskets and cork objects.

For all this, 7Pines preferred to deal with small artisans instead of big brands, in order to establish a dialogue and a cooperation with the island and its people and to make its guests experience an «authentic Sardinian stay».

The staff and the ingredients used in the restaurants and bars included in the resort are mostly Sardinian. «You can breathe Sardinia in everything we do». Fruits, vegetables and herbs come from the resort garden, fresh fish is be provided everyday by local fishers and all the meat, cheese and salami are be collected from nearby farms. «We do not work with big distributors, but singularly select each one of our suppliers among small local businesses. No doubt this is more complicated, but it enables us to offer our guests only the highest quality standards and to make them taste the real Sardinian flavors».

In order to make guests experience the ancient roots of Sardinia, which are mostly rural and pastoral, the resort also organizes theme parties, with dairymen showing how pecorino is made, or local folk groups. «On these nights Sardinia comes visiting us with its culture».

Organic and local ingredients are a must also within the SPA

Among the services offered by 7Pines Resort Sardinia, guests can discover an eight hundred square meters spa, with five cabins dedicated to beauty treatments, a relax area, saunas, sensory showers, a steam bath, an ice room and a Kneipp path.

Also open to non-guests of the resort, Pure Seven Spa brings to Sardinia a format already experimented in Ibiza, based on the use of organic and natural elements made of local ingredients – such as, in this case, mirth and juniper – applied to the world of cosmetics and combined with holistic therapies.

All beauty treatments can be personalized, including massages, body wraps and scrubs. «We have found a local brand producing essential oils and body scrubs, with which we are going to prepare three rituals, inspired to the nature and the climate of the island. Deriving their names and characteristics from the Sardinian winds – Ponente, Mistral and Scirocco – these will consist in massages and treatments ranging from a more energetic one (Mistral) to a more relaxing one (Ponente)».

As part of this wellness program, guests can also find sport facilities nestled in the garden, which communicates with the beach and every indoor space of the resort thanks to large windows and terraces. The garden offers paths surrounded by balsamic bushes, as well as wider spaces. Guest can choose between various activities out in a gym with a personal trainer or play tennis, padel or soccer in a multisport area. For those who prefer more relaxing and spiritual activities, 7Pines offers also yoga and meditation courses, held on the beach to the sound of waves.

7Pines features five bars and three restaurants, all based on a different concept and with its proper style. Executive Chef Pasquale D’Ambrosio, who is backed by more than two decades of experience in Italian hotellerie, is the supervisor of the cuisine. His resumé contains Hotel Sheraton Diana Majestic and Château Monfort, both in Milan, Villa Pamphili in Rome, as well as TV programs aired by RAI, Italian national public broadcasting company.

Capogiro, a dining restaurant with a view on the sea, also open to non-guests of the resort, offers a modern reinterpretation of the Mediterranean cuisine. With echoes of the Sardinian eno-gastronomic tradition, it uses local seasonal ingredients and cooking techniques apt to preserve their freshness and flavors. There, in the mornings, the resort guests can have breakfast and choose between two formulas: international buffet or à la carte menu. Capogiro restaurant also has its own bar.

Spazio also features a poolside restaurant and a bar set directly in the water. The restaurant, open for lunch, bases its menu and service on two principles: sharing and interactivity. The starters, ranging from raw local fish to poke salads, are served at the table all together for people to share.

The first courses are divided into two groups: homemade pasta and «culurgiones», Sardinan typical ravioli. In the first case, guests are able to choose and combine both pasta dough and sauce, while in the second, they can decide the filling of their «culurgiones», which will be then cooked in front of them. As for the second courses, a cart with either different cuts of meat or the fish of the day are be presented to the guests, in order to let them choose. Their pick will be cut, measured and then grilled on a barbecue, all in front of them. The pool bar will instead offer juices and extracts made of local fresh fruits and vegetables.

Cone Club is the resort beach club, accessible either by walking from the beach or by boat thanks to a private dock. With the beach as a frame, the club combines nightlife with the cosmopolitan cuisine of Chef Tohru Nakamura. Half Japanese and half German, he earned two Michelin Stars with his restaurant Tohru in der Schreiberei, based in Munich. Tohru selected the recipes and the ingredients for the Cone Club restaurant himself focusing on fresh and raw dishes inspired to the traditional Mediterranean cuisine. Based on the concept of sharing, the restaurant service recalls the Spanish tapas, where the plates are not taken to the table following an order, as per the Italian tradition, but all together for the guests to share. Cone Club also features a bar, serving cocktails created by Bangkok mixologist Philip Bischoff, and a DJ set.

The eno-gastronomic offer of the resort is complemented by two more bars: a cocktail bar that serves drinks along with a local reinterpretation of the snack concept – such as Sardinian poke and stuffed bite-sized mozzarellas – and a beach bar.

«We encourage our guests to go out and explore the island. We organize visits to local winemakers and suggest nearby restaurants where they can get a real taste of Sardinia. Moreover, we incite our guests to visit not only the most famous localities in the area, such as Porto Cervo, but also to discover less known but more authentic towns, such as San Pantaleo, Arzachena with its archeological site, or the blue zone of Ogliastra, whose inhabitants entered the Guinness World Records for longevity. We want to make our guests experience not only the Sardinian lifestyle of the Emerald Coast, but also the hinterland, where the true island traditions are to be found».

Finally, as for by sea excursions, 7Pines offers its guests a yacht service. The destinations suggested by Vito are La Maddalena island, located in front of the resort and reachable in twenty minutes, Corsica, the Emerald Coast, and all the northern coast of Sardinia.

7Pines Resort Sardinia, Destination by Hyatt, is opening in July 2022. The 5-star hotel was born in Baja
Sardinia, on a promontory of fifteen hectares of Mediterranean vegetation on the sea, a stone’s throw from the Costa Smeralda.