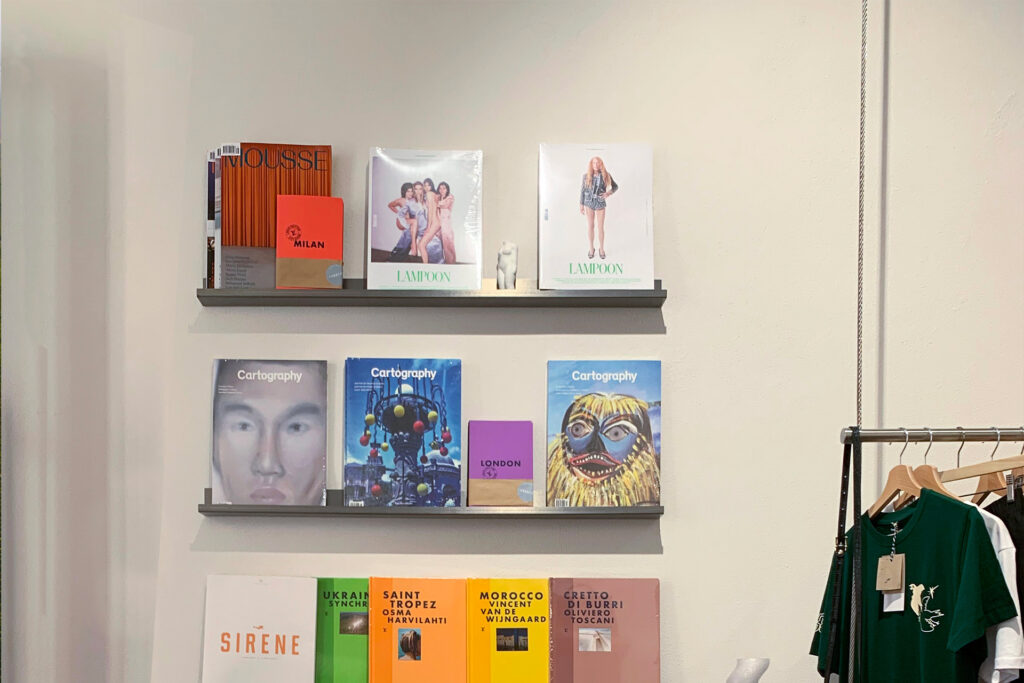 Upon going through a period of discussion with her peers, Riva settled on Luertís – a name that best described the adoration for her environs and a depiction of the area

«The name of the store is derived from an appreciation for art – the various aspects of it, and the spontaneity in which I choose to conduct my life. This is reflected inward and onto the art that I have created over the years », shares owner and founder of Luertís, Costanza Riva. The owner of the store took to speaking with Lampoon Magazine in the confines of her concept store. The space of which was one that featured a mass of length in a narrow space.

Riva and her realm of the arts

«Prior to founding the store or even deciding on choosing to pivot away from my career in a clothing and textile company, I experienced a moment of self-reflection that led me to question my career choices», shares Riva. Having worked there for a period of time, Riva felt unmotivated and drew no meaning at her then role. Riva, while planning on her exit strategy, began to formulate the externalities of her vision – founding a business venture that she could call her own. Though she had the idea of the concept store in conception, the naming of the store was a priority.

To execute this, she enlisted the assistance of her peers in formatting a name for the business she had in mind. Upon going through a period of discussion with her group of peers, Riva settled on Luertís – a name that best described her adoration for her environs and a depiction of the area she intended on situating her physical space. Upon finalizing the crux of the concept store, Riva realized Luertís as of March 26th, 2022, in the Via Trieste area of Brescia. Merging a number of elements into the vein of the concept store reflected Riva as an individual and how she functioned in the realm of the arts. Offering light-reading materials and literary goods alongside apparel and concept items, Luertís was Riva’s desires brought to reality.

Costanza Riva – Artist, designer, and curator of concepts and assisted by peers

Having acquired an education in sculpting at the Academy of Fine Arts in Carrara and then pursuing further education in fashion design and tailoring in Milan, Riva explicates that the reasoning behind the choice of her degrees lay in her curiosity towards art and its forms. This, she explains, can be seen through the manner in which the concept store has been constructed and embellished to suit her desired aesthetic. Items that are sold here vary in purpose and have a contrast in designs. «I began my education in sculpting as I found an adoration in the curation of human-like designs that could be made in a number of materials like marble for instance», the owner explains.

Upon having fulfilled her education in Carrara, Riva set forth to pursue fashion design and tailoring as she saw a connection and dialogue between the two unseeming fields of art. It was through the assistance that she received from her peers, Riva states, that she was able to get Luertís up and running into what it is today. «They are my supporters and have continued to be so despite having commitments of their own and living away from the city of Brescia», states Riva. Having assisted her with the designs of the store are Anna Mocellini and Nicolò Genovese, architects from the cities of Padova and Treviso respectively. Riva shares that Mocellini and Genovese have held a long standing appreciation for design and architecture, employing their skills that they acquired from IUAV in Venice and have since gone across the globe curating set-ups and experimenting designs through the use of recondite materials.

Federico Tomasoni, another peer of hers that has been involved with the realization of Luertís through the art designs that he has contributed to the concept store. Being an architect himself, who graduated with Mocellini and Genovese from IUAV as well, Tomasoni pivoted his intent and focus towards graphic design. Living in the city of Copenhagen and assisting Riva remotely, Tomasoni continues to devote his time, like the rest of her peers in allowing for the growth and establishment of Luertís as a concept store in Brescia. The last individual that has and continues to assist Riva is Ennio Bonoldi, a native from Assola-Mantova, providing a helping hand in overseeing business related matters that is needed for the concept store to function in its day-to-day tasks.

«The individuals that I have mentioned are dear friends to me. I met them in my time at Venice, having been the gift of having them as my roommates. We came together as a team prior to my founding of the concept store as we shared similar interests in the arts and a liking for creativity. We’ve known each other for the span of five years now and have since devised a plan to work together to support Luertís while remaining friends». For the design of the store, Riva retained the integrity from the initial building. Arches sweep the interior of the store and items placed across the space are unaffixed to allow ease of shifting if required – an idea that the owner came up with.

Luertís as a concept store

Reiterating her passion for dialogue and the connection between art forms, Riva elucidates that the thesis of Luertís lies in the items sold there. Alongside to stocking concept items and literary goods from creators that she scouts herself, Riva sells, as well, items that have been made by her hand. Employing the knowledge that she has in fashion design, tailoring and sculpting, this is what the owner has to say about the items that she has created and continues to create and sell in store. «My know how in tailoring and design have allowed me to create pieces that are niche and to my liking». The same can be said for her practice of sculpting – where Riva utilizes what she has learnt and experiments with a variety of materials to create items. When asked on her practice in sculpting and if she has continued to work with marble, she explains that she has chosen to approach sculpting from an alternative route. Having, in occasion utilized textiles to form sculptures, Riva shares that the act of sculpting is rather a way of living than an art form.

Regarding Luertís as a new-born, Riva states that the philosophy to managing the concept store is driven by a single motive – searching. As she puts it, there are a plethora of interpretations to the act of searching. Within the confines of the concept store, Riva has curated it to mimic a scavenger hunt of sorts. The signage is enshroud behind a translucent sheet of plastic, changing rooms are tucked into the walls, objects and items that are sold here tell individual stories and prompt customers to learn in detail about each facet of the store and what it carries, thus enacting the search.

«My reasoning behind structuring the store to prompt a search was a means for Luertís and myself as a business owner and creator to stand out». As the owner describes the state of the art world, she explains that monotony has been a constant pattern being upheld by creators. Though she believes that art is cyclical in nature, meaning has been lost through presentation. Holding onto the belief that ideas are the necessary in creating a community of creators, Riva urges creativity and the ideation for budding artists of sorts to explore their craft and emphasizes support by carrying the finished products in store.

The items at Luertís and its future

Though the thesis of the store has remained in serving esoteric items from the locale and abroad to the community in the environs, Riva highlights the intent she holds in running Luertís – creating a sense of community between consumers and the producers of the arts. «The shared interest of a certain topic or item, for instance, draws in a connection between my customers and myself as a business owner. It is through this interaction that I am able to learn current interests and how to shift the paradigm of function for Luertís».

Riva regards the items carried in the concept store a bridge for culture and building lasting connections with her customers. Selling magazines as a modular form of artistic communication – between design, image and words – Riva explains that there is a multitude of genres of magazines that are sold within the confines of Luertís. «There is art, music, fashion, architecture, and travel to name a few. I carry them as they are interesting to me, and I am interested in sharing my interests to the public. There is for example a magazine called Sirene that is curated to talking about the sea and made from materials of the sea», explains Riva.

Applying research of her own, Riva conducts this manner of function in scouting reading materials and concept items to stock and sell in Luertís. Bags, apparel, porcelain items and necklaces are some items that live alongside each other, scattered across the store. Visible to the public as it is situated in an accessible area for passers-by’s to come into the store, Riva shares that she looks to host events in the coming future as to build the sense of community within the environs.

Managing the store in a conscious manner, the owner is curating Luertís to function for the future. Choices in function, offerings and efforts with those of the locale is how she carries forth a greener concept store. Looking to finalize their presence online through the realization of their website, Riva shares that as of now, the intent is to build a rapport within the community she resides in, operating as they did before the accessibility of the internet.

A concept store with a pivot towards community and the functionalities of the arts, Luertís intends on growing within its locale as a provider of literature and concept items to further incite the appreciation for creativity.