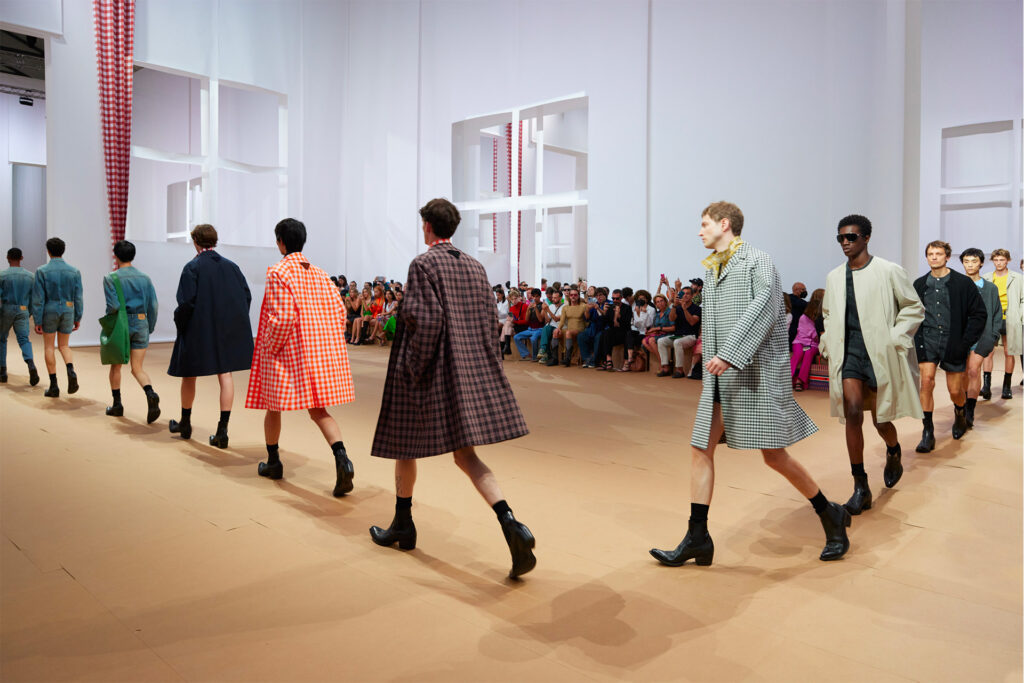 Ms. Prada and Raf Simons and the title Prada Choices: it’s still about your uniform

Prada Choices is introduced by the artistic duo as an understanding of the complexity behind something supposedly simple. It’s still about finding your uniform

From Plato to Prada Choices. The essentialism and the idea of properties

Over the century, people firmly believed in the view that some properties of objects are essential to them. Essence is the totality of a thing’s essential features, which is closely related to the concept of necessity.

Since Plato’s idealism, the idea that all things have such an essence – an idea or form – brought people to structure the reality as something that can be understood by a substance that ‘makes the thing what it is, and without which it would be not that kind of thing’ as the American linguistic and philosopher George Philip Lakoff has pointed out.

This is a universal concept, translated into contemporary arts, fashion, and lifestyle. And each choice people make is an act of creating their own identity. Fashion plays a role in this act, but it is a curated process. A world that emerges from an avant-garde with a minimalist edge.

Their Spring Summer 2023 collection Prada Choices was conceived to be an expression of those essentials. Where fashion is evoked through context and the juxtaposition of elements and garments. Fashion is a manner, a way, and a means of appearing. The clothing in the collection has simple categories with a complex underlying reality or true nature that one cannot directly see.

Clothes are a means to express a combination of a long process of design, a decision, and an instinct, as Miuccia revealed: «So much that the base is a conceptual choice—a coat, jeans, a suit. They appear simple but are the result of a process of choice—there are hundreds of coats. Why is this the right one?»

With Raf Simons and Miuccia Prada at the helm, the House takes a turn into the avant-garde as of late. People witnessed the Fall/Winter 2022, which brought the drama and glamor as ‘theater and cinema as mirrors of reality’ served as inspiration. While Simons’ debut collection for Fall Winter 2021 screamed of the Belgian designer’s boundary-pushing aesthetic. Their new collaboration captures the formality of the House and Simon’s youthful and playful edge.

Miuccia Prada and Raf Simons created a coat from paper to tease their Spring/Summer 2023 runway show, premiering during Milan Fashion Week on June 19. The artistic duo emphasized the power of choice while highlighting the expression of curated processes.

In a room at the Deposito of the Fondazione Prada, white sheets of paper hang from the ceiling with cutouts that simulate a window as a backdrop. Elements come together in a dialogue of contrasts. Without distractions, the Maison offered clear space for the clothes to speak for themselves.

The Prada style is an expression of simplicity, refined in clarity, expressed through unexpected combinations of classic elements. The co-directors of the Italian House focused on the exercise in reduction and simplicity, ideas Miuccia Prada and Raf Simons have been exploring since they began to work together.

Since 2020 their work has been directed towards the power of creative imagination at a time when the industry is obsessed with exponential growth and number crunching.

This time they took on the curating process that always leads back to the body. Anything that even remotely constricts the body is useless.

«The collection is about simplicity and essentials as a concept, as a choice. The idea of trends interests us, and this one is one. It was about clothes people could wear, but with an impact», Miuccia shared in a press release.

Prada has declared how aesthetics have changed the way men and women have wanted to present themselves in the last three decades, and in Simons, she has found an accomplished collaborator to challenge and inspire.

Although the designers have different backgrounds, they have a common passion for arts and historical dress references, sharing the idea that fashion is a way to connect to what’s happening in design, music, and the general culture of the time. Although Simons studied industrial design, his passion for techno music would become his creative support in his subsequent life.

Prada Choices -as the artistic duo revealed – is an instrument for finding and realizing new concepts, to relook at how creativity can evolve in today’s fashion system, focusing on the idea of a high-impact simplicity. As a result, the collection stands close to the design DNA of its creative directors: youthful can also mean tailored.

This season saw Miuccia Prada and Raf Simons attracted to the idea of ‘normal’ clothing, classic pieces, and archetypes. However, the same garment in different materializations changes their language entirely. Every item is simple and direct, but their combinations and context are complex.

Simons’ vision integrates classic elements with new and exciting elements. First, there is leather against the body, then cotton on top – there is a kind of anti-logic to the combination of clothes, and oddness. It was Miuccia and Raf who focused on the basics of dressing: suiting that puckered and pinched in the right places, exaggerated shoulders, and a nipped waist.

Alongside denim ensembles, leather in whole looks becomes the texture of choice for garments like shorts, bombers, tank tops, and cream-colored trench coats.

Miuccia and Raf pursued a logic of radical reduction, removing collars from jackets and poplin shirting, pulling the silhouette close to the body, and abbreviating lengths. There are elastic textiles in knitted sweaters, where colors ranging from yellow to red to pink create a series of horizontal lines.

Checkered patterns are a great example of this geometry throughout the collection. An embroidered Prada rectangle appears on the mascot fabric and is paired with rough leather shorts with a double closure. The exhibition reveals a brief section of washed denim. Sneakers appeared between Cuban heeled boots.

A slim silhouette and untraditional style alter the proportions of the garments. Trousers drew closer to the body than usual and finished with the crop, nodding to times of growing out of people’s school uniforms.

What the artistic duo brought to the runway is a lightness and movement. Embodying a sense of freedom that becomes evident in what happens in the collection. Beginning with suits that cover from head to toe and changes to pieces that reveal the skin.

Miuccia Prada and Raf Simons’s idea of the curating process of the creatives consists of an ongoing transformation of the masculine wardrobe on the catwalk, with garments symbolizing a physical and emotional relief. Prada choices are a space of intimacy where the essentialism of human lives establishes an unexpected game between the old and the new.