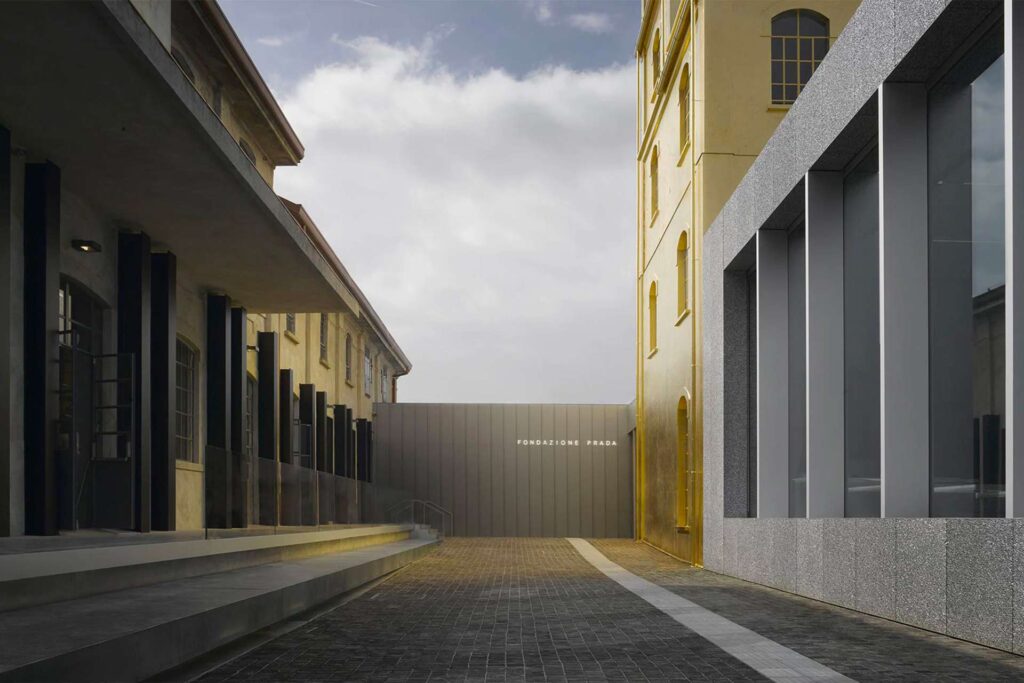 The awakening of the giants. Industrial buildings shine again with new functions

Tate Modern, Prada Foundation, Hamburger Bahnhof, Hangar Bicocca. A tour of Europe’s leading cities in the field of culture show a new trend in architecture: the renovation of industrial buildings

A giant dismissed factory lives within the city perimeter. Abandoned, they seem like mythological monsters that fought a big battle. Fascinating and uncanny, they also gave birth to a new photographic movement dedicated to capturing the inside of these gigantic monsters’ bellies. Thanks to far-sighted architects, those immense industrial cathedrals, with the graft of new architectural shapes, have a new life and become museum models.

London’s Tate Modern is now one of the most iconic examples of this method. The former dock’s power station, in May 2000, became one of the most important contemporary art museums. Thanks to the architects Herzog & De Meuron. Still, in 1992, the Tate Trustees had announced their intention to create a new gallery of modern and contemporary art and selected the Bankside Power Station as the site.

Herzog & De Meuron decide to preserve the original body of the factory. This was a critical decision. It was necessary to remove the machinery and clean the brickwork and steel structure of the building. The block shape remains the same as it was as a factory, improved to provide room for visitor’s facilities and exhibition spaces. The giant turbine hall is now the museum’s iconic entrance, and the boiler house transformed into the exhibition gallery.

In 2009 a new block was opened to the public: The Switch House – or the now called Blavatnik Building. This was in honor of the contribution of sir Leonard Blavatnik. A red brick tower with the original color of the old building. This block adds new exhibition spaces, performance spaces, a kids’ lab, bookshops, and a parking space for the visitors.

A similar example appears in Milan’s Fondazione Prada, where, since May 2015, the venue of the 1910’s former distillery Società Italiana Spirit, famous for the Cavallino Rosso’s brandy, hosts one of the most important contemporary art museums in Italy. Designed by Rem Koolhaas from OMA studio, the compound maintains most of the original distillery buildings in contact with new blocks designed as an ideal museum.

The Podium is part of these new buildings that interact with the old ones—a glass box where the exhibition became part of the inside and the outside. We see here a practical use of material: the aluminum foam, a new kind of foam, is light and thermal insulated and has its aesthetic. This project provides two conditions: preservation and creation in an ongoing interaction. Comparably with the Tate Modern’s Switch House, in 2018, a new wing of the museum was opened.

Torre is a white concrete building with glass surfaces that host the permanent display of the foundation’s collection and the restaurant. It is a nine floors building, where each of the floors has a different orientation, clear height, and plan dimension.

The clear height of the ceilings increases from bottom to top, such as the windows’ orientation in each room, changing light and perspective. The iconic elevator in pink marble and glass lifts you to the exhibition floors, with a panoramic and exclusive city overview. The project is not seen as preservation or a new architecture but as a continuous comparison and interaction of the two conditions. As Rem Koolhas called it, ‘an ensemble of fragments’.

In Berlin, an example of this modus operandi can be found in the Hamburger Bahnhof, one of the most crucial railway stations of the Nineteenth century, a unique example of a neoclassical railway station left in Germany and conceived by the railway pioneer Friedrich Neuhaus.

At first transformed into a transport museum, during the Second World War, the building suffered several damages and remained in the no-man’s land between East and West Berlin, unused for decades. After this era, in 1987, it was used to premiere the exhibition ‘Journey to Berlin’, and it marked its previous use as an art museum.

In 1996 the building became the museum we all know, thanks to the architect Josep Paul Kleihues. It became the ‘Museum für Gegenwart’, the museum of the present, displaying works from the collections of the Nationalgalerie and from the Marx Collection between the 1960s to our days. In 2004 the museum added a new wing, hosting the Friedrich Christian Flick Collection as a long-term loan.

The museum, called the architectural firm Kühn Malvezzi, decided to use the former dispatch warehouse, located behind the main building, as a gallery. To connect the historical buildings with this new part, called the Rieckhallen, they made a white concrete bridge that, seen from the outside, became a functional and eye-catching sculpture, contrasting the gallery’s black.

In Italy, another example is Pirelli’s Hangar Bicocca. In 2004, the museum opened as a free-of-charge contemporary art museum in the former Ansaldo-Breda factory. With a renovation project by Milan’s April Architects, Ansaldo 17 became an art space after a decade of neglect by Pirelli RE.

Additionally, carriages were built in a railway environment. The oldest part of the factory was The Shed, a typical low bare-brick building with a double pitched roof. This part hosts beginners or young artists’ exhibitions, visitors’ facilities, the kid’s lab, and a restaurant.

The now called ‘Le Navate’ is a vast building constructed between 1963 and 1965. The building has retained its original shape, consisting of a nave and two isles, just like an industrial cathedral. The second isle hosts 2004 the Seven Heavenly Palaces by Anselm Kiefer. This monumental installation can only be on display in the space of the Navate, thanks to its size, and it is the only permanent part of the museum.

At the end of the Navate, we will find the Cubo, the climax part of the exhibition of the isle. In 2000 storage facilities and sheds were demolished to make room for the garden, especially for Fausto Melotti’s ‘La Sequenza’, which, since 2010, welcomes all the Pirelli Hangar Bicocca’s visitors.

The requalification, in this case, was more functional than architectural. The April Studio worked on the facilities spaces for offices, services, and the floor heating. Also on a welcoming area with an info point and a bookshop, always having an eye to the industrial esthetic. As we can see in the Bistrot renovation, where the studio reused industrial elements found in the ex Ansaldo.

We can understand that this phenomenon takes big cities’ dismantled factories – or stations – to transform them with new buildings and new wings. We have these vast spaces perfect for large installations that we can only find in a contemporary art exhibition.

In these buildings, the architects tried to keep the former shapes of the buildings. And graft to them those unique and iconic architectures based on new shapes and materials. This way, even the name of each building and part of the museum remains the same as the original factory. Maintaining a boundary between the past and the future. Contemporary art always lives in these kinds of projects, reflecting a future in an interesting conversation.

Tate Modern is an art gallery located in London. It houses the United Kingdom’s national collection of international modern and contemporary art. Tate Modern is in the former Bankside Power Station, in the Bankside area of the London Borough of Southwark.

The Fondazione Prada is a cultural institution founded in 1993, chaired by Miuccia Prada and Patrizio Bertelli. It is dedicated to the realization of projects in contemporary art, film, photography, philosophy, dance and architecture

Berlin Hamburg Station is a former train station in Berlin, currently converted into a museum. It is located in the Moabit district. Hamburg Bahnhof is today the only one preserved of the old Berlin head stations. At the same time it is among the oldest train stations in Germany.

Pirelli Hangar Bicocca is an exhibition space dedicated to modern and contemporary art located in the Bicocca district of Milan.