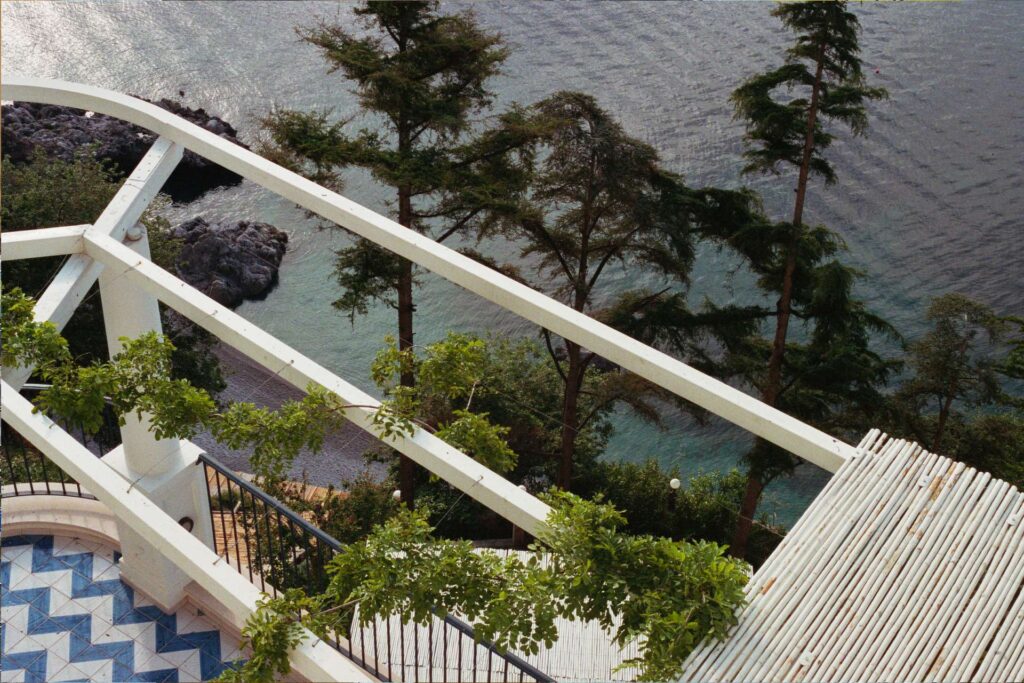 Borgo Santandrea: a display of vintage design and respect for the Amalfi Coast

The hotel is the first to open after fifteen years in the area. Four years of renovation works presenting today Gio Ponti ceramics and other 1950s vintage pieces

The first hotel in fifteen years

On April 14th 2022, on the Amalfi coast, near Naples, the Grand Opening of Hotel Borgo Santandrea took place. It has been fifteen years since the last hotel opening in the area. In the Middle Ages, Amalfi was one of the four Maritime Republics of Italy, alongside Venice, Genoa, and Pisa. The variety of cultures that landed here, thanks to commerce with Asia and the Near Orient, has left its mark in the architecture and vegetation that characterize it.

Ogilvy arches and garden terraces define the houses and the landscape, which have become over time a symbol of the Coast. Borgo Santandrea is in between private villas, belonging to personalities of the Italian jet set. There is no mass tourism around this specific area. And the party life that has been going on in the villas has not affected the Borgo.

The building is a 1960s villa, standing on a cliff ninety meters above Conca dei Marini, the fisherman village below. The families Orlacchio and De Siano who have been working in the hospitality field for decades. They have a good friendship. They joined together in the ownership of Borgo Santandrea, and commissioned the restoration of the former Grand Hotel Saraceno, built in the Fifties, by architect Rino Gambardella. The project started in 2017.

The intervention meant to maintain the spirit of the Borgo, a place that would embody the Italian style of vacation, that had its peak after the Second World Ward, attracting Americans and Europeans. It develops in height. Eight lifts allow to everyone the access, starting from the private beach up to the top of the hotel. Respecting accessibility standards, and the lifts avoid noise pollution. Moreover, the access to an isolated and private beach is uncommon in this area, due to the geological conformation of the Coast.

During the construction works, to bring in materials, «we set up a 35-meter crane at the top of the building, for which we built a designated base» explains Gambardella. «It is reassembled every year, organising its transport at night and during winter periods. Unloading at the pier is not an option, for the risks of stormy seas and to avoid polluting the beach. In addition, unloading from the top down avoids complications that would arise in the opposite direction». The original supporting structure is from the 1960s, and no reinforcements were applied to it.

«The building unloads everything on the ground, on the rock. We detected some very thin pillars, thirty by sixty centimeters, in all floors. Today it is incomprehensible, because it was not an earthquake-resistant structure at that time, despite it is thoroughly» continues Gambardella.

«One of the reasons is that in the 1950s the Mezzogiorno Bank commissioned reinforcement of these areas. A farmer pointed out to me that for centuries people were afraid to live under this cliff. Whereas today there are nets that prevent landslides, and the mountain is cleaned and constantly monitored. There were major consolidation works. The Borgo’s architect – who also contributed to the redevelopment of Naples’ Fuorigrotta neighborhood in the 1960s – consolidated the sloping land by making it into terraces, and incorporated a pre-existing house, dating back to the 18th century, into the later Borgo Santandrea».

Hence, the walls and vaults of some of the rooms in the existing hotel date back to that era, and the hotel beach appears in century old maps, with the name Grapevine Beach. Having obtained permission in the 1960s, the rest of the hotel was built on the reinforced terraces. «Before proceeding with the work, we carried out load tests in the attics, with tons of water, and found that they had excellent strength. Therefore, we demolished the whole interior, keeping the structure, rebuilding from there».

A display of design furniture

Interiors resonate the place spirit through vintage and re-edited design objects from the 1950s. They were part of the private collection of one of the owners, who was a design collector. He and the architect decided to use the objects in the hotel to create its aura. Englander & Bonta 1960s original chairs decorate the twenty-nine rooms and sixteen suites, alongside re-editions of Gio Ponti chairs by Molteni&C. Gio Ponti designed some fabrics as well for Rubelli, while re-editions of glass and brass lighting fixtures were made by VENICEM.

Sitting in a Fredrik Kayser’s armchair, it is possible to appreciate the sea landscape. From a room where the windows have been designed to let the sunlight enter without invasion. In the outdoors there is furniture by Ethimo, while in the kitchen are still in use 1950s pieces by Berkel. Gio Ponti design can be noticed in the blue and white 1920s ceramics by Richard Ginori, exposed in walnut bookcases by Paolo Erba. The blue and white color pattern returns in the floors. The result of two years of craftsmanship inspired by the geometries found in Pompeii. Other Gio Ponti and Gardella designs by Tato are present in the rooms, the three restaurants, and the two bars, alongside Gerald Thurston’s lamps and De Castelli’s metalwork.

Respect for the place’s history and environment were two key-factors during the restoration and further after the opening. The water in the private pools of the eight Premium Suites is set to reach a maximum of 30°C. While inside the rooms there are energy-saving technologies. Home automation interventions have been made also in the kitchens. There was a project design for this space. Which it included central units where the organic waste is compressed and deprived of its water, to dispose of it.

Products are supplied by our vegetable garden, when possible, or by local providers. Bottles are only in glass, and our vehicles’ fleet is electric. The kitchens are at the disposal of three restaurants and two bars, venues where the proposed cuisine is Mediterranean, under the direction of Executive Chef Crescenzo Scotti. La Libreria and Alici are the two restaurants on the top of Borgo Sant’Andrea, while Il Borgo serves the Beach Club.

The gardens of the Borgo are a place where aesthetic served functionality to obtain a result that would respect the Coast landscape and the environment. They are terraced gardens, created by Gaetano Amato, third generation of a family that has been involved in the gardens of Amalfi and Ravello. A legacy of garden designers and gardeners who narrated the floral path of the Amalfi Coast.

Gaetano Amato worked together with Philip Adiutori, founder of the Florentine studio MÀKIA. «We told him what we wanted to do, and he put it in the plan; he brought it to us, we liked it, and from there the works started» tells Amato. «We went ahead with our ideas and continued to come from time to time to supervise. About the plants» he continues, «we chose pomegranates and olive trees. Quite obvious for a Mediterranean garden – but we opted for myrtle instead of lemon trees. Thus, the Borgo is one of the four places where you can find garden myrtles in Italy. And these are two hundred years old».

The gardens are terraced, «a technique that derives from the Arabs» explains Amato. «They built them inside walls, on the houses, bringing water to them with specific systems whose base we still use. For example, the soil. We spent time finding the right one. Which had to be fertile and light, because it had not to weigh on the floors. We found that in Tuscany». Between the soil and the floor there are layers of inert material, potting soil and then an organic plant nutrient. «Underneath there is a glass fiber that we found in Germany, which is very light but still provides thickness and volume avoiding loading on the attics».

Water-saving and recycling was a key-point when designing the gardens. «Underneath the plants, there are cells where water is deposited» continues Amato. «They are natural reservoirs: the water doesn’t go dispersed. Some of it stops on this kind of a bed formed by alveoli, where you create hydric-reserves, and the roots, slowly over time, manage to look for water on their own».

These reserve structures are what define these gardens, that by appearance would not appear to differ from other kinds. «At one point the hotel had no more green space. We had to create everything from scratch. We pulled these gardens out of nothing, designing the water plant with Gambardella. It was a challenge, but we managed to connect everything. To the reservoirs and to the thermal plant, all masked by the terracing». This way, the garden appears to be a blend of the cultures that left their mark on the Coast during the centuries: while Romans didn’t take advantage of the Coast. The Greeks imported olive trees there, and then the Arabs brought the lemon trees from Asia, and the terrace gardens. The result is a Mediterranean landscape, a place that tells the story of its environment using the tool of beauty.