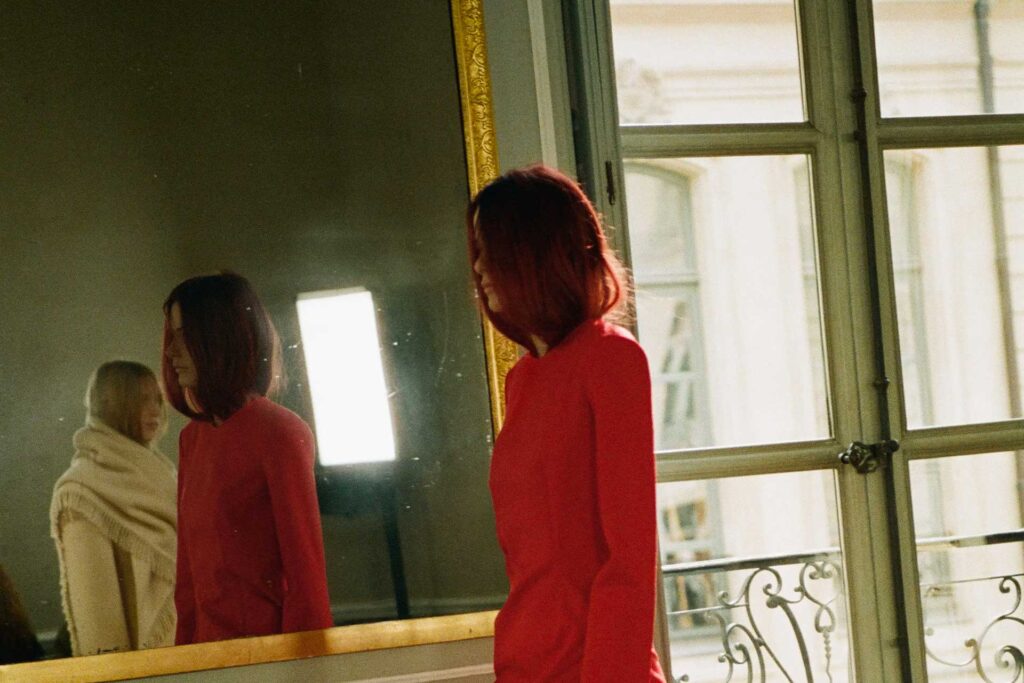 Debuted during Paris Fashion Week in an intimate setting with no live stream, the Row resort 23 collection confirms the label’s philosophy to stay off the social media radar

It’s been two years since Mary-Kate and Ashley Olsen, designers of The Row, showed up with a new collection. This time, they left New York to do it in Paris, aiming at a more sophisticated segment of the public, a symptom of evolution in their aesthetic.

The Row Resort collection style is stylized and in Paris, is easier to take. It looks like a shift from what they have started with. Relying on the Japanese influences with the cocoons and tight overshoes. The high definition level of control, the sharpness, and awareness for who this is for, to wear it and enjoy it.

The soft and exaggerated volumes are romantic but don’t feel weak. It’s about being quiet and discreet. The elegance and sophistication are extreme in the form of extra-long sleeves and neck grazing ’70s-inspired collars, pillbox hats, and muffs. The concept of luxury has been twisted and made in an elevated way.

A hymn to understated excess

The usual streamlined look in fashion is widely available now, and it comes in a lot of price points. The one by The Row doesn’t feel unusual or unique. But it’s targeted at a very young luxury audience that enjoys fashion and its elegant cosiness. No prints, a lot of head-to-toe monochrome or black-and-white.

There’s a glimpse of sportswear and evening as reference for some of these looks, combined with the surrealism and the same movement that was a part of 1930s culture. The result is a hymn to understated excess.

The idea was to replicate the essential pieces that we already own. But, this time pushed forward and with a real purpose.

One feature that separates Resort 2023 from the previous collections is their layers and quantity, more than we’ve seen before. Still clear and defined but put together in a different vision of basic. Soft but strict. Cozying and wardrobing. The lightness is disappearing from the imagination. The jabots give the twist as oversize as the pointy collars, the back-to-front coats, and the cashmere bag covers. Overall, it feels heavy and consciously curated. The focus is on the joy of dressing up and layering up, an exclusive invitation to people who do fashion and are into fashion. The quality of the fabrics and the creations are also paramount, distinguished by the strength of the essential clean-cut structure.

One of the few that passed the test of time, the celebrity brand has positioned itself among the big names in the sector, earning its place during Paris Fashion Week.

The Olsen is off social media and not a fan of interviews. Those who were fortunate enough to see the show up close were the only ones to watch live. Those present filmed and posted the only footage that exists.

A literal fight was generated to get the information about the show, making the designers among the few followers of the in-real-life philosophy. The way the collection was presented was very intimate and in line with the leitmotiv of the brand; it’s their strategy, and it works to serve the people who will be buying the clothes ultimately.

The official release included pictures taken on the runway, which are very casual – a lot more than the usual look books. Still, they leave you with the sense that you needed to be in the room to truly understand what was happening, which is also a statement.

The philosophy of the brand

The concept of the brand is very curious: The Row has always been a label that has managed to avoid hype, but at the same, it’s succeeded in becoming the obsession of the fashion and art crowd, gaining the celebrity-approved status. It is not attractive from a visual point of view, but the name and the allure are.

It’s expensive, quality-minded, it pushed the concept of simple forward, and the elusive Olsen twins created it.

Without forcing prints or logos on the clothing, the brand focuses on finding the perfect fit for the elegant working people: from the tailored trousers and blazers to crisp shirts and oversized coats.

The Row never shares images of celebrities wearing their brand on social media – the PR approach completely avoids the release of interviews and public statements close to events. The brand has built up a cult following that has now bridged over to Hollywood celebrities.

Resort 2023 is the new collection of The Row by Ashley and Mary-Kate Olsen. Place Vendôme hosts the first brand presentation during Paris Fashion Week.