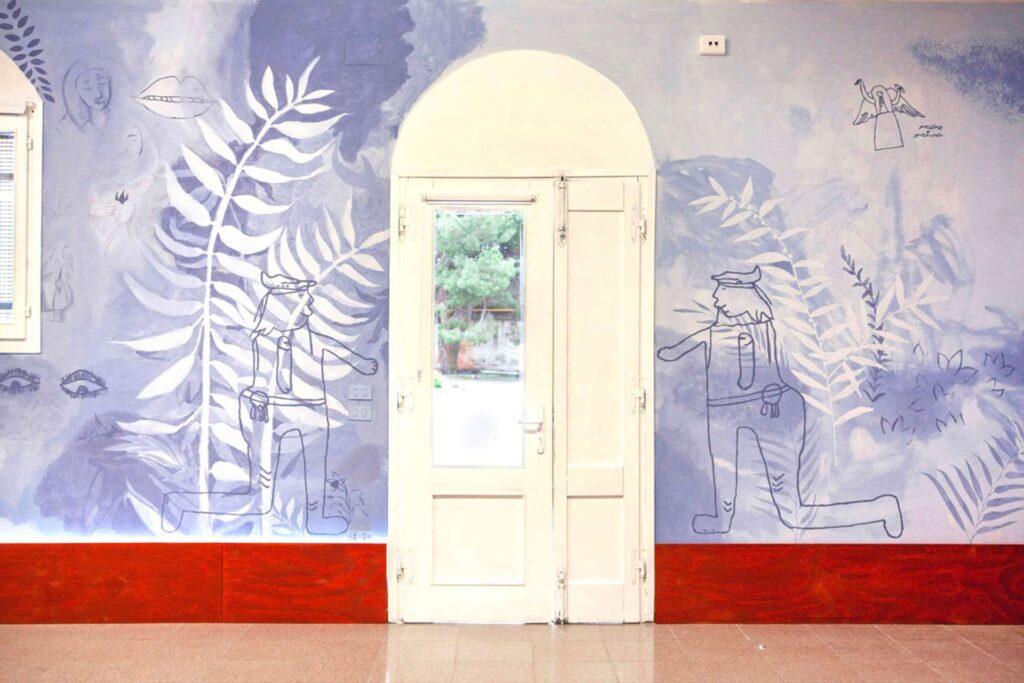 Some places look unearthly, unwelcoming, uncanny; yet, in the midst of adversities, facing a multitude of crises, abrupt possibilities appear. ‘In the middle of nowhere’, yet right at the center of the most urgent contemporary debates.

Creativity and collaborative activeness come in aid and offer unexpected outcomes. We used to be frightened by remoteness and extreme geographical and atmospherical conditions. Now we are surprised by art growing out of complexities.

The coping strategies activate communities and create alternatives. «Seeing the result of the dynamics between people and adversities was fundamental to understand how the work of art and its public dimension exists, regardless of everything, and how it somehow survives».

The combination and fusion of dichotomies such as isolation and community building, inclusivity and exclusivity, local and global speaking of artistic practices and exhibitions, remoteness and togetherness, the territory’s exploitation and mass-tourism effects, art and nature.

The Italian curatorial duo Francesco Urbano Ragazzi is reflecting on these themes ever since their nominee, one year and a half ago, during the pandemic, for the 2022 edition of LIAF – the Lofoten International Art Festival, that will take place from September 3rd to October 2nd in the Lofoten Archipelago, Norway, in the Arctic Circle.

The curators chose both artists born and raised in Northern Norway and artists with other backgrounds that chose to contribute actively, using different medias, to the territory’s identity and development. The biennial, the oldest of Scandinavia, was first initiated in 1991.

The region hosts a heterogeneous community, both local and international, thanks to a series of cultural realities such as glass workshops, galleries, festivals and contemporary art schools that create new communities.

Among these, the Nordland kunst-og filmhøgskole, a school for filmmakers and moving image creatives, that the curators strongly support. «The choice of Kabelvåg’s film school was fundamental in the type of relationship we wanted to establish with the territory […] we chose to believe in a young community».

They were interested in the fact that they chose to live in these islands, isolated the depth of a complex ecosytem, reflecting and creating in a specific imaginary, coping with the extreme geographical and atmospheric conditions, giving alternatives.

This is the reason why they chose to collaborate with them, making a film that will be screened during LIAF. The curators also gave a grant to four selected local artists, all very different one from another, however, «always questioning what local artist means […] and to show how there are different types of locality and localism».

The very structure of LIAF is impermanent, movable, not connected to a permanent location or space. Yet in region there are also permanent art works, like in the case of the Artscape Nordland project, an international art collection started in the 1980s consisting of sculptures placed across Nordland, including works by artists such as Dan Graham, Cristina Iglesias and Luciano Fabro.

Looking at these unstable yet prolific encounters, the curators question themselves on what does it mean to be a regional artist in such places where artists, audiences and locals meet and exchange ideas and artistic practices, not only for the duration of the Biennial, despite the exhibition’s ephemerality (one of the many contradictions that actives a process).

To follow the idea of the flux, they decided to organize LIAF in more chapters, trying not stopping the flow of ideas that circulate freely. For this edition the curators reflect «on different temporalities, including that of permanence. Some of those works presented will remain permanently; these in some way will activate long-term narratives which in away also seems to call into question the very system of the biennials and it’s long term effects».

Something Out Of It, Venice, Italy

This stratification is also part of the italian Venetian Lagoon and Venice, a city touched by different temporalities, hosting all year long biennals, exhibitions, cultural venues but firstly, human beings, from all over the word. Some stay longer, others are part of a fast turism that creates another temporality but also represents a threat for the landscape’s integrity.

In the past the curators have already reflected on the different forms of exploration and systems of consumption and how these have a direct reflection in the cultural process and the artistic production within the territory they are produced or hosted.

«What the Lofoten Islands and the Venice Lagoon have in common is that both realities are exposed to a huge flow of mass tourism […] – what we try to do is finding strategies of poetic occupation».The similarities between the Lofoten islands and the Venetian lagoon is the reason why the curators, during the fervent opening period of the 59th International Art Exhibition of La Biennale di Venezia, chose to present here Something Out of It, a precursory exploration of the themes set for LIAF, in the form of two exhibitions in two venues, in the parlour and courtyard of a functioning women’s prison and a private palazzo.

Reflecting on the transmedial dimension of the works presented and the events the curators explain: «both are community activators […]. It is necessary to get out of the absoluteness of the work fo art. Each one of it can have possible small ‘avalanches’ within the work itself and generate chain reactions.The work has its own continuous possible metamorphosis that shouldn’t be stopped».

From the 18th to the 24th of April, Francesco Urbano Ragazzi unveiled a permanent communal installation by artist Pauline Curnier Jardin at the Casa di Reclusione Femminile della Giudecca. In collaboration with the inmates, officers, the members of the social cooperative Malefatte, the artists who founded the Venetian collective Casablanca Studio, the creatives behind DROMe, sound designers and animators, the artist Pauline Curnier Jadrin presented her video ADORATION.

Reversing institutional hierarchies, the inmates have chose the parlor as the setting for the permanent installation. Through a series of collaborative workshops and drawing sessions with the Rio Terà dei Pensieri social cooperative and the Venice-based artist collective Casablanca studio, the artist and the inmates reshaped the parlour of the penitentiary, using projections, furniture and wall paintings, making it a hybrid space for images to travel freely.

«The freedom and the movement of images is certainly the real ‘Something Out of It’ that interests us. Regardless of whether one has been to the opening in the Giudecca, whether one comes to Oslo or the Lofoten Islands, there is a power of the image that goes beyond the boundaries of the moment, of the idea. The images exists and therefore it must be liberated […]. The consequences of the images are more important than the images themselves». To underline the idea of how images travel freely, the film by Pauline Curnier Jardin will be present in the Centraal Museum Utrecht, and will open LIAF 2022 in Kabelvåg.

Resistance as a form of non-violence reaction

The curators also opened the doors of Casa Venezia, the private residence of collectors Massimo Adario and Dimitri Borri in collaboration with Case Chuise by Paola Clerico. Consisting of a series of trap sculptures, photographs and a video installation called Desperate Times by artist Tomaso de Luca, the project is inspired by the story of an estate developer escaped to a guillotine device in his property in Philadelphia in 2019.

De Luca  links this event to the consequences of climatic gentrification in American cities and investigates the crisis of modernism linked to socio-natural phenomenon, as well as reflecting on the most recent climate changes, all themes that are central to LIAF2022.

The curators invites us to rethink the very notion of home, safety and comfort, transforming a house that we all consider defended or defendable into a tedious place with potentially lethal traps, both threatening and with a possible comical outcome.

The work can also have many possible settings and be descovered in various settings with different storytellings. Violence, in this case, is seen ironically. «Forms of resistance do not necessarily coincide with forms of violence. In the case of Tomaso the violence is in any case evoked inronically. In the case of prison it can be seen, even the agents who let sixhundred people, in resisting the very nature of the institution they belong to; the same thing cans be said on the people of the Rio Terà dei Pensieri community, with whom we first entered into dialogue, that produce forms of community to resist isolation, becoming possibilities in the lives of the prisoners». Isolation and freedom may seem opposites, but feed themselves actively, becoming a new concept of freedom.

After Something Out of It, Kenneth Goldsmith’s Retyping a Library, will be opening on June 9th at the Kunstnernes Hus in Oslo. Curated by Francesco Urbano Ragazzi and Anne Hilde Neset, director of the Kunstnernes, the exhibition is the second and last project to preview the themes of the next edition of the Lofoten International Art Festival opening the 3rd of September in Kabelvåg.

«We are interested in seeing how communities respond to the phenomenon of the huge flow of mass tourism andcomplex ecosystems, somehow finding a way to counterbalance it, finding creative strategies of exhistance and restitence». Looking for Something Out It, meaning going outside,  a movement of liberation, a form of reaction to a centripetal force, in order to make art and life flourish, in order to survive.

A curatorial duo founded in Paris in 2008, trained in ontology, gender, and media studies. The duo has developed The Internet Saga, a research platform and cycle of exhibitions that started with a homonymous solo show by independent filmmaker Jonas Mekas at Palazzo Foscari Contarini (2015) and culminated in the exhibition Hillary: The Hillary Clinton Emails by the poet Kenneth Goldsmith at Cinema Teatro Italia (2019), both presented on the occasion of the Venice Biennale.

Within this framework, the team has also developed commissioned projects in partnership with private and public institutions such as CERN, the European Organization for Nuclear Research (Geneva), the Bucharest Biennale, and Maraya Art Centre (Sharjah).

In 2015, Francesco Urbano Ragazzi established a close collaboration with the late Jonas Mekas, curating shows, publications and screenings worldwide, including Again, Again It All Comes Back to Me in Brief Glimpses, the artist’s first retrospective exhibition in Asia (the National Museum of Modern and Contemporary Art, Seoul, 2018); his last solo exhibition (at Ásmundarsalur, Reykjavik International Film Festival, 2018), and the publishing project Transcript 04 44’ 14”: Lithuania and the Collapse of the USSR (Humboldt Books, 2020).