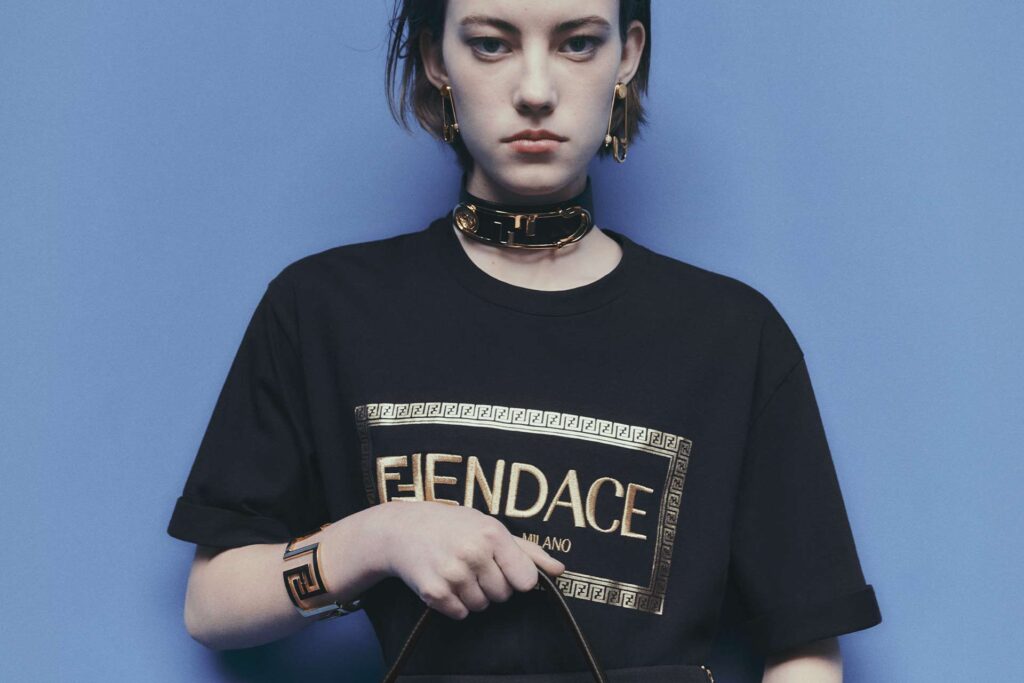 Fendace: the first swap in the fashion industry – Just don’t call it collaboration

The collection was presented in Milan and it’s a promise we are back to the nightlife – bit is it contemporary? Versace delivers Fendi, Kim Jones, the codes of Donatella

Fendi by Versace – Versace by Fendi: the ‘Fendace’ collection

In September 2021, Donatella Versace and Kim Jones teamed with their respective labels to give birth to ‘Fendace’. Fendace is a full never-seen-before swap with Versace creating a ‘Fendi by Versace’ collection. On the other hand Jones and Venturini Fendi creating a ‘Versace by Fendi’ collection. It was an experiment rather than a simple collaboration in mutual trust and friendship. Celebrating the beauty of coming together after a long period of isolation, using Kim Jones’s words.

As shown in the documentary ‘The Swap‘, an exclusive behind the scenes look in preparation of the surprise show in the courtyard of the Versace family palazzo in Via Gesù, Donatella declared that the creative change of roles was taken as a game, more than a real job, allowing the designers to be free, so they could fully express themselves. Jones’ trusted Versace enough to give Fendi to her and her vision, and Versace did the same with him. The combination of these two antithetical minds and histories in a one of a kind collection pushed the boundaries beyond the idea of a simple collaboration, giving birth to a new way of seeing fashion.

A celebration of Italian fashion

In the Fendace news release, the Swap has been described as ‘the celebration of Italian fashion and a disruption of the established order of things, that stands for freedom, fun, and friendship’.

Exuding bold styles and statement colors, the ‘Fendace’ collection brings to life a collective retaining both the brands’ classic design cues. Jones’ fascination with the Nineties, the years in which Gianni Versace established its most exuberant pieces, and the supermodel attitude. And Donatella’s vision of how she sees Fendi, created a whole new idea that mixed the codes, the double F and the Medusa or the Versace. Jones’ collection for Versace featured many of the design house’s symbols. Examples are the safety pins, the iconic Baroque print, and sheared furs, reworking classic looks from Versace’s archives to include Fendi’s iconic double F logo and the Italian house’s Grecian motif on bomber jackets and mini dresses.

However, Versace’s approach to designing Fendi was edgier. It embodied the sexy aesthetic by using chain mail with lace and plastering crystal-encrusted F’s on statement pieces like minidresses, ’70s-inspired denim pantsuits, and shimmery gowns.

Versace by Fendi and Fendi by Versace

Created with full access to the archives of each fashion house, Fendance comprises fifty looks. Twenty-five for each house – split up into two sections; the first being Versace by Fendi and the second Fendi by Versace. A marriage that weighs in on logos, motifs, design codes, and iconography. Fendace comes off looking more Versace than Fendi, with Fendi’s FF partly unable to stand out as much as Versace’s baroque stylings, which are louder.

However, Jones and Venturini have been able to transfuse streetwear and subcultural style through a luxury lens. Not only by the association made using the Greek key prints and the baroque curves but also with the predominance of the stiletto and the Donatella-blonde wigs. The Versace-reinterpreted Fendi section is two-tone brown with eye-catching double FF diamond-encrusted patterns, looking more Versace than Versace itself. What comes to mind is the dazzling amalgamation of some of fashion’s most iconic brand codes.

The entire Fendace collaboration is available for purchase from May 12, with some pop-up stores open through the end of the month and others extending to mid-June. The whole ‘Versace by Fendi’ and ‘Fendi by Versace’ collections will be available at a series of global pop-ups located in New York City, Los Angeles, London, Paris, Tokyo, Osaka, Shenyang, Kuwait, and Dubai. In addition, Fendace co-branded looks will be available for sale from both fashion houses.

The Swap: the journey to the show

What’s unusual in the Versace and Fendi collaboration is that LVMH owns Fendi while Versace belongs to Tapestry. Two houses that don’t share the same parent company. The mutual love inspired the idea and respect Jones and Versace have for each other and evolved after Donatella hosted a private dinner for Jones, Silvia Fendi, and Delfina Delettrez Fendi in February.

The way the designers both reinterpreted the language of each other’s houses resembles a full-circle moment. Gianni Versace and Karl Lagerfeld weren’t just rivals but real friends. Moreover, both designers got unlimited access to the respective brand’s archives. While Donatella visited Fendi’s archives in Rome, Jones explained in the short film ‘The Swap’ that visiting Versace’s archives in Novara was a dream come true as he grew up loving and looking at Gianni’s innovations, the same that served as an inspiration for the Fendace collection.

The secret show that closed Milan Fashion Week in September 2021 was the first after 18 months to take place in real life. Instead, the event celebrated the return to nightclub life. With ‘Way 2 Sexy’ by Drake, Future, and Young Thug blasting at total volume.

The catwalk was opened by model Kristen McMenamy in an all-black safety-pinned look designed by Fendi. And closed with supermodels, a choice made by both stylists. Jones modeled his creation on Kate Moss, Amber Valetta, Shalom Harlow, Adut Akech, and Precious Lee. Meanwhile, Donatella opted for Naomi Campbell and Gigi Hadid; they all paid homage to the party-dwelling It-girl in a dark atmosphere to make the dazzling pop.

Campbell was the connection between them all, a dear friend of Gianni and Karl Lagerfeld, and the one that remains a regular in Jones’s and Donatella’s shows.

Ultimately Fendace is about the need for sincerity in fashion today rather than strategy, aimed to connect to the growing Gen-Z luxury consumer. The two-part collection played on the strengths and iconographies of each house, a formula aimed at a Tik Tok audience.

Donatella Versace and Kim Jones designed the Fendace collection for Fendi due to the creative Swap between the two designers. Unveiled at a secret private event during MFW and out from May 12 online and in selected pop-up shops.