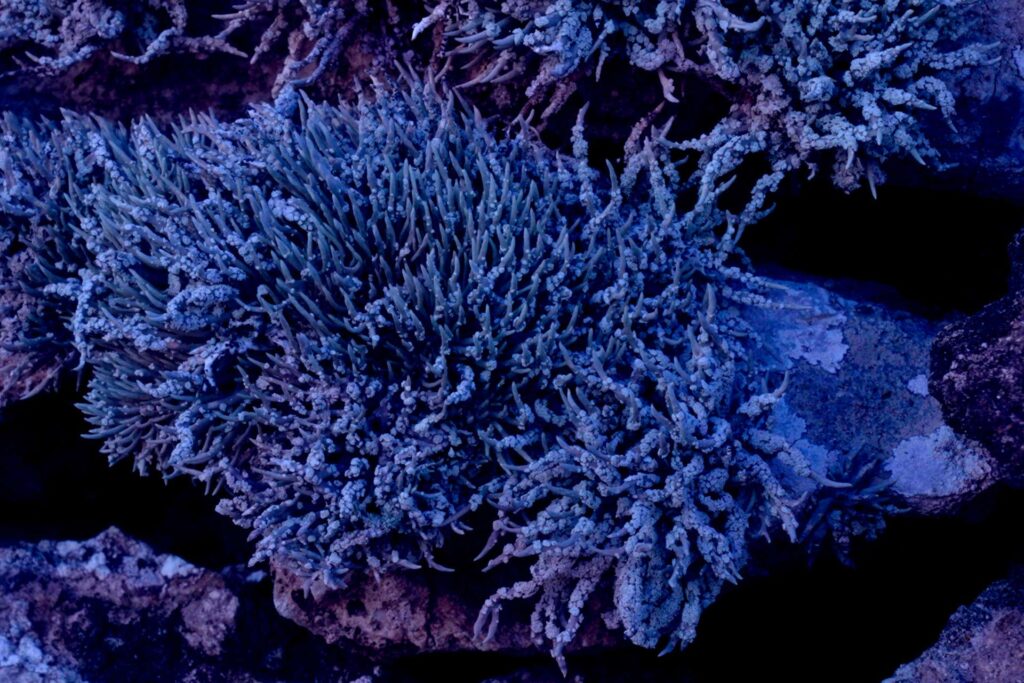 Coinciding with Biennale Venice 2022, as part of the biennial exhibition series The Soul Expanding Ocean curated by Chus Martínez, the commission of this year gives voice and body to the Ocean as a repository of colonial histories whose narrative interweave past, present and future.

Telling the stories are microorganisms and algae that have coexisted since the beginnings of evolution, rocks, voices, moving images like waves, the land that holds the memories and substance of past actions that have compromised life in different ways.

The latest work commissioned to the artist for Ocean Space sees the development of a scenic installation. It is inspired by a research trip to the Portuguese Wild Islands (Ilhas Selvagens), located between the Madeira Archipelago and the Canary Islands, which have become a case study in mapping colonial histories through tracking natural biodiversity.

The central themes for the study of the rock landscape included empathy for the Ocean and environmental health. Through the presentation of video, audio, and drawings of the Ocean’s microbiota, Diana Policarpo conveys an aesthetic sense of the landscape while offering a conceptual understanding of the issues the coast faces, including the algae and fish that inhabit it.

Her work alters the way we see the natural world by actively engaging the viewer in experiencing textures, perceiving images, and immersing themselves in the atmospheres.

Diana Policarpo’s work is entitled Ciguatera, the name of a food poisoning caused by the ingestion of food of marine origin contaminated with a toxin. The cue for the installation came from a trip to the Portuguese Wild Islands (between Madeira and the Canary Islands) and in particular from her case study mapping colonial histories through the tracing of natural biodiversity.

Curator Chus Martinez explained: «Diana Policarpo plays with our physical presence in space to make visible the many ways in which the ocean gives meaning to life. The installation is an island, a wild island untouched by humans. The commission offers a solid foundation to the question about our understanding of the ocean: how to formally connect with a formless entity and why is art key to issues such as the ocean and climate emergency? Unless we are able to experience all the dimensions that potentially connect us to the ocean, rather than separate us, we will not know how to act. And acting is what we intend to do. Action that cannot be limited to avoiding further harm, but must be aimed at creating the conditions for experiencing ourselves and every living being as part of a life we respect and listen to».

For instance Ciguatera is a multimedia installation composed of sculptures, sound, film and light. Policarpo discloses: «When Chus Martínez invited me for a new commission for the Ocean Space last year, we wanted this project to be entirely dedicated to the ocean, in this case the Atlantic. I wanted to develop this idea of researching and filming in the Portuguese coast and islands, since it has been very affected by a contamination of ciguatoxins and in the whole Macaronesia».

Ciguatera disease has affected navigators and coastal populations for centuries and it was first documented in Homer’s Odyssey and navigation diaries. It comes from toxic plankton and travels through the whole food chain until it affects humans, with symptoms that include nausea, hallucinations and sensory disturbances.

The research started a year ago in July 2021. Policarpo wanted to film in Ilhas Selvagens because little was known about this natural reserve and the stories behind this territory. This sanctuary has been administered by the Portuguese government since 1971 and is located between Madeira and Canary Islands.

The remoteness from civilization has meant that these islands have been shrouded in myth ever since, a distance that has also allowed this ecosystem to be unique; also providing excellent nesting conditions for birds and other marine species, as well as endemic plants.

The Ciguatera fish poisoning in Madeira and Canary Islands appears to be related in particular with the consumption of fish caught close to Selvagens Islands, which indicated that this territory is to be one of the most favorable locations for ciguatoxins food web transfer. This project highlights the need of further research based on intensive environmental and biological sampling on these remote islands.

The islands are almost inaccessible. To access, visitors (almost only reserve staff and scientists, conducting research on wildlife) require a special authorization from the Madeira Natural Park, the regional environmental authority.

They supported her in making a proposal to do her project there since she was interested in making work about Space and Ocean. She had the opportunity to travel there later in November 2021 with the Portuguese Navy since there is no other transportation and stayed there living in the military base.

About the ocean and Ciguatera contamination

Policarpo explains that during her stay there had been key connections with professionals to create knowledge, discuss protocols and procedures to discover more about the intoxication from ciguatera poisoning.

«I was interested in filming and writing the scripts for the three films, since two of them are fictional and another one more documentary based on the research. I wanted to find more about the problem of contamination and possibilities of healing or cure by learning about the native and endemic flora in the islands».

According to the artist, this was something that has been studied in some islands of the Pacific and Caribbean, but not in Macaronesia. «I also wanted to bring into attention that this territory is a geological analogue to Mars but also to know that an International team of scientists and speleologists were training an astronaut there just before us». It was in fact the first time they took a portable lab to analyze microorganisms from the islands present in geological formations, such as plants, shells, sand, bacteria, rocks.

Also, the vermillion sands that travel by air from the Sahara desert gives the plateau of the main Island a complete Mars look.  There are ongoing research projects as diverse as microbiology, biogeochemistry, paleoclimatology and biotechnology for a multi-disciplinary study of the Island that helped the artist to understand it in more depth. Furthermore Policarpo wanted to tell more stories about its social and political context.

The role of the ocean. The commitment of art to reverse the wrongdoings of colonialism

The stories, told by rocks, voices, and images that move like the waves, tell of an earth that holds the memory and the substance of the past and the past actions that damaged life in many ways. Travel such as the one undertaken by Policarpo can become a language that allows us to imagine a reversal of the wrongdoings of colonialism.

«I wanted to experiment more with the writing and by creating one of the characters that is the Island speaking for itself and about the species that coexist in that place. Another key aspect was to be able to film the Island and the laboratories afterwards, to have a lens following natural and artificial states of creating language and images in different scales and crossing different bodies. I also wanted the Island to be the water planet present in this sci-fi short story I wrote which talks more directly about the disease and the impacts of climate change and colonialism in that place».

Giving presence to the Ocean and the stories it holds

Diana Policarpo’s commitment to the ocean occurred through research that mutated in many ways. «I wanted this project to have a connection with the previous ones I did and to continue this research in natural resources, psychedelics and interspecies relationships. The focus on toxicity, magic and rituals is used to bring questions and open up a conversation about care and healing. This is a connection with the land and also about healing ourselves».

The soundscape was composed in collaboration with Odete, artist and Policarpo collaborator based in Lisbon. «The multi-channel audio installation brings all the elements together and creates a circuit along with the sculptures and screens in the Ocean Space. The architecture, light and moving image are other parts that makes it more into a physical experience and stimulates all the senses. Making something sculptural that comes from that observation of deep time and geology, because you are as if in the ocean when you are walking around the space».

Chus Martínez is head of the Art Institute at the FHNW Academy of Arts and Design in Basel, and 2021-22 curator of Ocean Space in Venice, TBA21-Academy’s center for knowledge dissemination, research and advocacy for ocean issues through art.

TBA21–Academy is TBA21’s research center and cultural ecosystem fostering a deeper relationship to the Ocean through the lens of art to inspire care and action. Established in 2011, the Academy has been an incubator for collaborative research, artistic production, and new forms of knowledge by combining art and science for more than a decade