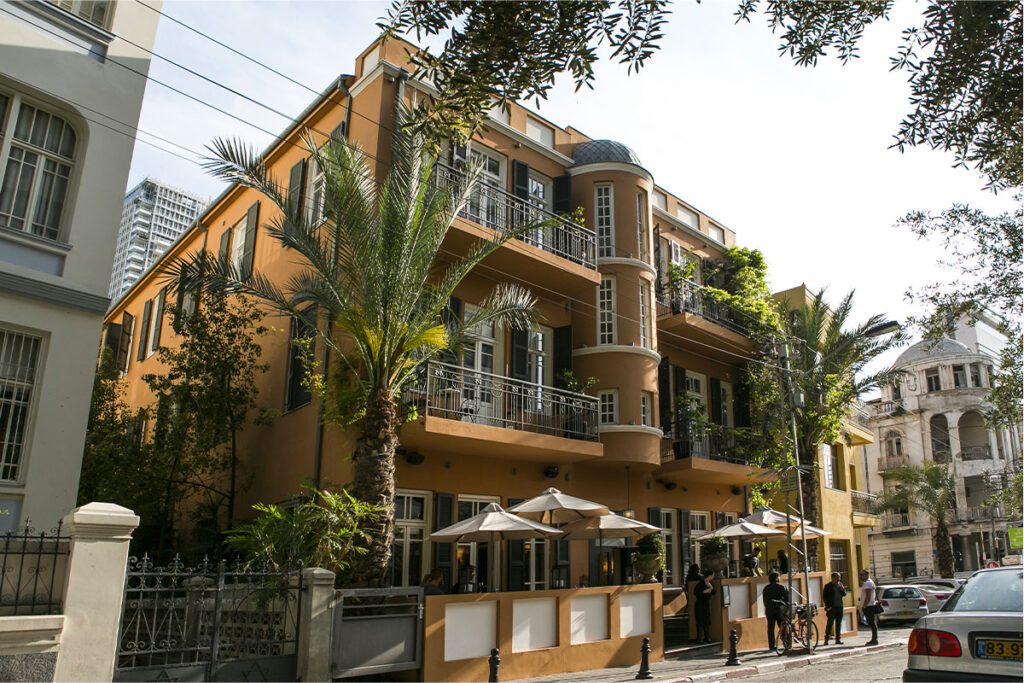 «The name of the street is Montefiore, and the hotel is named after the street in the central of Tel Aviv».

In the city center of Tel Aviv rests a boutique hotel that derives its name from the street it sits on, Hotel Montefiore. The street is the namesake of a Lord who was a British subject, and an establishment was named after him. Mati Broudo and his now ex-wife, Ruti Broudo, rehabilitated the property into a hotel and opened its door in 2008.

The founders belong to contrasting disciplines. Before becoming hotel owners, Mati worked as a Software Engineer and Ruti was a Chief Financial Officer. They were residing in New York in the 1990s. Several establishments, in the vein of Hotel Montefiore, emerged during the time; as a result, their boutique hotel is their depiction of that era.

The duo was however no stranger to the industry. Prior to the establishment of Hotel Montefiore, they established a French-Italian café and a brassiere, the first establishments of their sort in the city. Then, it took another seven years for the hotel to open.

In the early 1980s, UNESCO declared Tel Aviv a world heritage site with four-thousand registered buildings. Today, Hotel Montefiore is one of them, with its building being close to a century old. Mr. Broudo shares, «There are two types of buildings in Tel Aviv. There’s eclectic and Bauhaus which is the modernist. In fact, Tel Aviv is known for its Bauhaus architecture». Also, masses of Montefiore’s structures borrow from Vietnam and the Southeast Asian country’s architecture «It’s an eclectic style architecture, with the type of buildings you would see in during the French or English colonial times. They resemble modest palaces».

The philosophy of Hotel Montefiore within the city’s vibrancy

Before there was Hotel Montefiore, the concept of an event space gained flight. When it no longer seemed attractive, Mr. Broudo slipped the idea of a boutique hotel into one of his dialogues. While it was not accessible to include a swimming pool or a beach to accompany it, the overall proposal was accepted. His philosophy is traceable to Mr. Broudo’s adolescence years; he spent eight months at a hotel, particularly one in Rome, where he occupied a modest space inside a compact room. «That’s what led me to believe it could be done in such locations. As long as it had a nice bar and a restaurant, it could work». Since the hotel’s debut in Montefiore, the city has seen numerous others of its kind. According to Mr. Broudo, competition does not exist, but it instead it represents the reflection of the return of the city’s vibrancy. «When we opened the hotel in Montefiore, the number of tourists coming into Tel Aviv was two million. Today, it’s four and a half million».

The role of books within Broudos’ thought spaces

The Hotel is composed of twelve rooms in total, each one personalised, with seven of them featuring a balcony.  The color scheme used to design the spaces is reminiscent of 1930s Vietnam, with sunlight streaming in through windows making the gold color bright. Ruti’s architectural vision was to actualize the age of French Indochina, reminding of a bygone Saigon.

To compensate the lack of a pool and beach, each room has a library. In each chamber, the shelves parade about six-hundred titles of literature in English, Russian, and Spanish. Acquiring and purchasing these books has the intent of creating an environment in which Broudos envisioned themselves to be in. The handpicked titles pay homage to the beauty of different communities, such as the one existing in Israel. «I had the chance to actually say what I wanted to say in these libraries», explains Mr. Broudo.

Being the founders’ readers, in a similar way the collection of art books in is present also in the restaurant’s lounge, keeping inspiring the occupants.  «If you wanted to write a novel, this would be the place for it». In fact, the author Malcolm Gladwell stayed in the hotel for a month, writing and researching a book.

The hotel’s bar invites the guest to go inside – as Mr. Broudo says, «It likes being open».

The catering services employ takes approximately 1,000 people. Particularly in the kitchen, the menu varies every day, with dishes that aim at surprising guests of all nationalities.

The kitchen is helmed by a head chef who graduated from Le Cordon Bleu, a French culinary school – backed by a crew that approaches food as an art form. They all focus on traveling, eating out, and are engaged in all kinds of cuisines.  Whereas every kitchen staff possess the creative freedom to explore, they must be willing to accept criticism at the same time.

Broudo’s aims towards a new project

Having been long time players in the industry, the Broudos do not plan on retiring in the near term. Indeed, a sister hotel to accompany Hotel Montefiore is in the works. «There’s another hotel that’s in the making. It’s going to be opened this year, and it’s likewise a boutique hotel. It’s the first time we’re venturing into a collaboration».

The pandemic caused several adjustments in the hotel’s operations. According to Mr. Broudo, the industry is changing, and he believes the odds are in his favor. «I wake up every day hoping the hotel is as favorable as it was the day before. That’s better than anything I could wish for».

Hotel Montefiore is a twelve-room hotel, blending the intimacy of a guest house with the service philosophy of a high-end hotel.