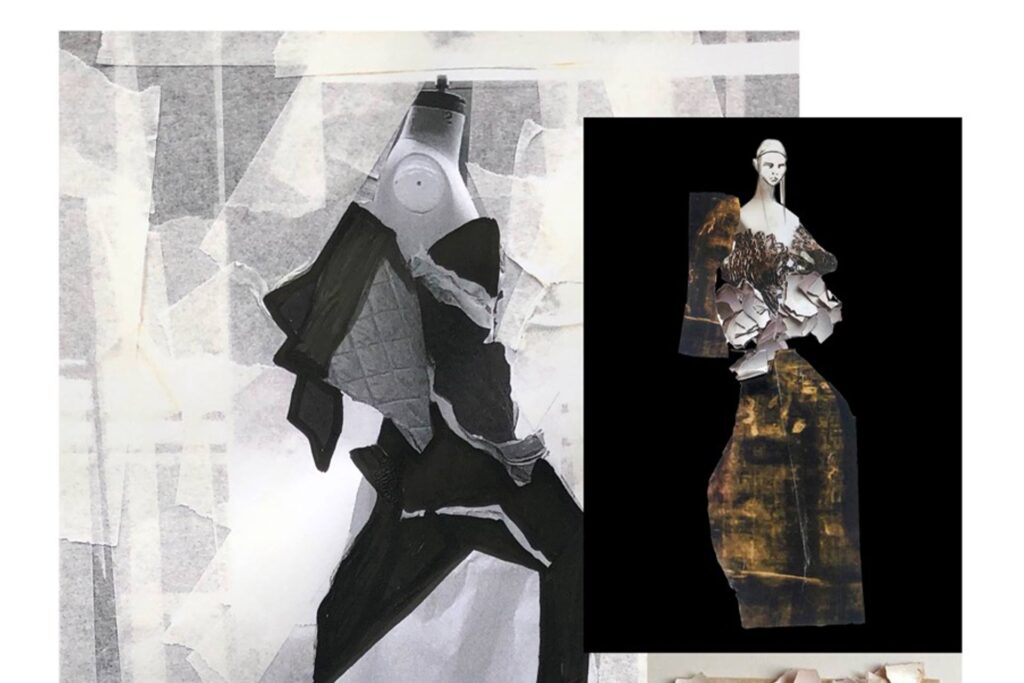 Three students from Central Saint Martins created a fashion film centering a garment made of paper cups, eggshells and cornstarch – then buried it after filming

Lampoon introduces the team behind ISABEL

The fashion industry has a waste problem. Given the complicated mixes of man-made textiles, garments are increasingly hard to recycle. Eighty-five percent of textiles in the US go to landfills or burned, according to US Environmental Protection Agency.

The fashion industry, becoming increasingly aware of its impact, is searching for ways to tackle this.  One solution is to embrace circularity within the fashion system’s processes. This is achievable through biodegradability, and better yet, compostability. Experimentation with new textiles and resources is key in this journey. This concept of compostable garments is the very focus of the fashion film Isabel.

The main trio that brought the film to life was a mix of Central Saint Martins students. They have still not had the chance to meet in person. They came together during lockdown, through friends in common. Studying various areas of fashion, they joined forces to highlight this key topic.

Alonso Gaytan, who had the initial thought, studies Women’s Fashion Design. She creatively directed and created the garment featured in the film. Zak Berry and Arisa Takada bridged reality and virtual through 3D modelling and photogrammetry.

They presented the concept in video format to demonstrate the process of composting happening over time. The format was better suited to portray the continuous decomposition and shows the slow decay. Gaytan’s interest in virtual fashion also played a role, as the film delved into this medium.

Demanding change in the fashion system

«Sustainability needs to become a process, rather than a label,» states Gaytan. This mindset inspires her to embrace the cause in her methodology. Motivated with the aim to change the fashion system as we know it, she created the garment for Isabel.

It was the result of a long research and experimentation with textiles and compostability. Having worked as a barista, Gaytan was increasingly aware of food waste in her community. This impacted her choices for the materials too. The paper-like textile contained compostable paper cups. Egg shells and cornstarch as embellishments.

The natural dye was made from coffee waste from local cafes. For instance, respecting every material and being aware of their finite nature was the overarching idea. Aware that there is more room to improve, Gaytan places value in the very exploration of the idea.

She explains how she is motivated by bigger brands already using paper-like fabric; and expresses her hope that more brands will follow suit. Changing their entire process and how they produce fashion is a bigger challenge for established brands.

However, Gaytan stresses their pivotal role of making a bigger impact.  They have the chance to not stay on an experimental level as pieces produced by fashion students would. «They have the budget, and the power is in their hands».

Compostable garments connecting to the cycle of human life

With the pandemic, Gaytan was introduced to the feeling of grief in a momentous way. The passing of her aunt Isabel, who she describes as her second mother, had a huge impact on her. This pushed her to constantly ponder burial rituals.

Connecting the cycle of human life and bringing the rituals that surround its end to fashion was the first step. Gaytan’s idea of composting was rooted in the sense of becoming one with humankind; bringing fashion design closer to the cycle to which everyone belongs.

The distinction between biodegradable and compostable plays a big role in this cycle. Although biodegradable materials break down in nature over time, they can still be harmful to the environment. Plastic bags, for example, decay in 20 years, but their impact on the soil remains.

Compostable materials on the other hand, are made of organic matter. When broken down they become nutrient rich compost. So, choosing compostability entails a continued support to nature. The materials used in the garment take anywhere between several months to several years to decompose. But the important thing to note is the good they bring to the soil they’re in.

The connection with nature as a catalyst for the garment

Feeling fully connected with nature and a sense of paradise was the catalyst for the garment, and the film. Her vision of the waterfall and rocks was incorporated within the film through photogrammetry. The technology is used to obtain information about physical objects through photographic images.

The information is then carried onto the 3D modeling software to create virtual elements borrowed from real life. In search of a way to make the garment split up and decompose, the team found the idea of the waterfall to be useful. The splashes created by the waves were perfect to convey the decomposition.

With Takada living near the sea in Tokyo at the time, she supplied videos of waves crashing into the shore. The team took the videos and extracted the texture created by the splashes. Therefore, this was merged with the garment, creating a unique blend of fabric and waves. The technology and the chosen medium created space for experimentation with different materials.

The resulting visuals showed a garment that was slowly scattering around and becoming one with its surroundings. After the shooting, the garment itself was also buried, in order to fulfill the aim of compostability. It is living on in the digital realm, yet no longer existing in our physical world. With this, the film raises the question of a double life. A temporary form of expression versus its digital counterpart creates the striking contrast.

Bringing the fashion film together through sound design, lighting, and accessories

Isabel features a dark and eerie backing track that accompanies the dark visuals of the decomposing garment. Ethan Mullings, fashion designer and musician, had been a friend of Gaytan’s for a while. Gaytan explains how after hearing his music, she had always wanted to collaborate with him.

That finally happened when he created the sound design that helped in constructing the environment for the film. He used water and metal to create the music that grounded the visuals. Furthermore, the team agreed that without the sound, the film does not feel tangible. It did pose challenges for Berry and Takada. They worked long hours to sync their visuals up with the sound; timing was key to elevate their message.

The darkness of the sound design complements the dark tones of the fashion film. Berry explains how 3D modelling is usually more suited for darker lighting, making the textures look more real. Having overcast sunlight tends to spoil the illusion of reality in the virtual world.

The jewelry for the film created by Scout by Scout, which specializes in up-cycled pieces. Having worked together before, Gaytan had the chance to tell the jewelry designer about the idea. With aligned values on circularity, they collaborated for Isabel too. Although the jewelry created for Isabel was up-cycled and not compostable, it was still nothing short of a statement.

Isabel is a fashion film presenting a fully compostable garment designed by Alonso Gaytan. Embracing the circularity of a burial, it draws similarities from human life and death. The film was created using photogrammetry and 3D technologies by Zachary Berry and Arisa Takada.