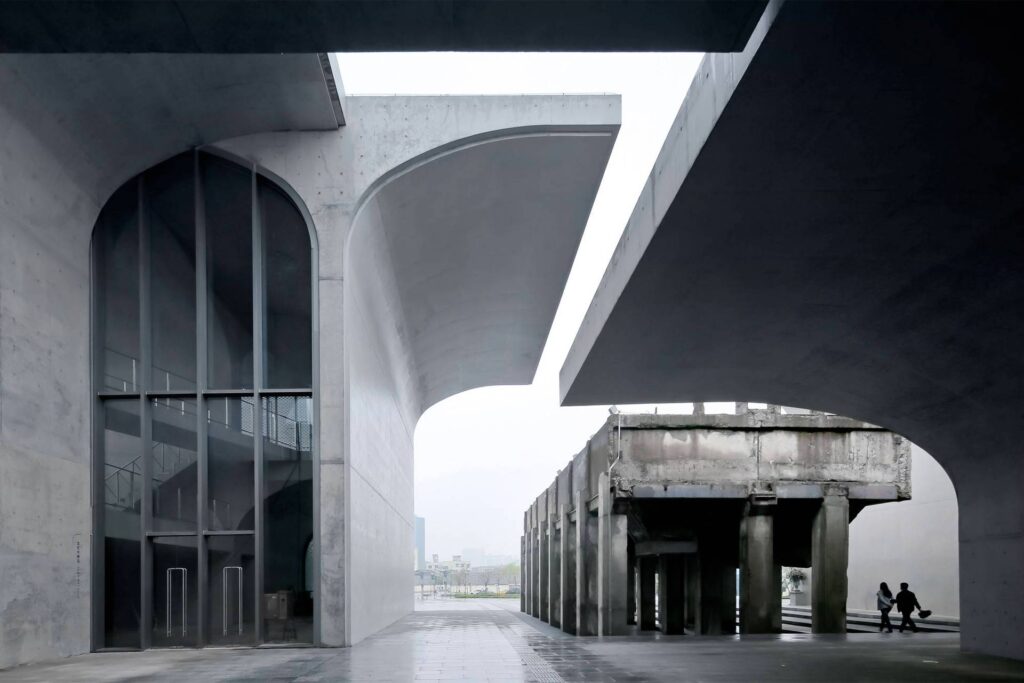 Modern Museum of Contemporary Art (MOMA) in New York presents a selection of architects who conducted projects outside the metropolitans of China and charted into the suburbs.

Their process of construction leaned on the voice of natives. Who expressed a desire for the character and culture of the community to stay incorporated. Of the eight designers showcased in Reuse, Renew, Recycle, Zhang Ke, Xu Tiantian, and Zhu Pei are a few standouts, who applied these principles, to create infrastructures serving the future.

The success of their projects is at the forefront of new trends elevating society without the sacrifice of local traditions. By utilizing the natural resources, they demonstrate repurposing what pre-exists can build anew.

Mao Zedong’s reign ushered in a period of vicissitude for China after establishing the People’s Republic of China. Any recollection of culture before his leadership was seen as unfavorable for advancing technological innovation, governance, and socioeconomics in China.

This ideology brought forth the exile of infrastructures, books, and savants. Furthermore, thousands of buildings were destroyed to make way for modernity. This philosophy resided in subsequent leaders, and as China’s economic welfare progressed, investment to revive the cities became an initiative.

The decline of arts in Chinese society correlated with China’s widespread extinction of traditions to obtain modernity. This era influenced the rise of megaprojects, becoming prominent in the early 2000s.

China commenced the largest construction site globally, initiating megaprojects concentrated in the urban cities. The communities that stand on the outskirts of the inner city, indicate the disparity between buildings serving the community juxtaposed with “starchitectures” having no sense of place.

Xu Tiantian bent and tied the bamboo into a dome, that convexed over the center stage. Shielding the audience from the sun’s cast. She shares her “architectural acupuncture” approach in the village. Believing the work reinjects life into the region and compels others in nature’s beauty. Today, the Bamboo Theater serves as a communal space localizes performances, events, and practices.

Outside the inner city of Beijing, Hutongs have served as dwellings for centuries. Hutongs are known for their conjunction of buildings forming narrow roads with an exterior appearance that many say looks inside out. The exterior is walls, followed by more walls as one travels onward.

In western cultures, walls establish boundaries with the expectation to block out or enclose a space. Establishing distinction or disconnect from its neighbors. Whereas the construction of Hutong walls signifies strengthening of the center–being family— at the center of Hutongs are courtyards that the community share. Kevin Hu, comments on the Hutong distinction in the thinking of Chinese architecture being to focus less on the perimeter the walls give and know the walls are definitions to the center of creation such as Hutongs.

In preparation for the 2021 Olympics, Beijing made way for the stadium’s building, but there was also pressure to accommodate the influx of tourists. China set out to impress, but not all architects followed the tradition to vacate the area for structures of steel. Architect Zhang Ke renewed the construction of Hutongs, ensuring to maintain the concept of community while meeting the margin of contemporary.

Architect Zhu-Pei was approached by the mayor and community members of Jingdezhen to commemorate the porcelain capital of the world. It is known to be the origin of porcelains dispatched to museums worldwide. In the heart of where the Ming Dynasty once stood, Zhu-Pei led the design concept for the Kiln Museum and customized the angles, materials, and shapes to pay tribute to the history of the district.

Fascinated by the kilns’ role in the community, Zhu-Pei took trips to Jingdezhen to observe their construction to gain clarity in executing the structure of the kilns. He noted that the walls were handmade to control the strength and curvature of the walls and applied the method to his process. He insisted that he and his colleagues first create models by hand in preparation for construction.

The team made variations of the design using wood, paper, and, most unconventional of them all, porcelain. Upon building, Zhu-Pei emphasized that the team’s commitment to uphold the history of the kiln’s bone structure and cater to the environment was essential to ensure the museum’s proper integration into the community.

The execution of this piece evokes pride in the evolution of Chinese craftsmanship and appreciation in prevailing the porcelain experience. Zhu-Pei combined old brick along with brick recreated from local soil. He mixed the two to create a compilation of the interior and exterior bonded together with cement.

The precision of the building’s direction, water features, and garden locations shielded viewers from heat and exposed them to the winds to create the zen ensemble.

Countries strive for unity but for centuries faced the political fears of disintegrating order in the presence of discrimination and inequality. Many believed to source from differences in environment, cultures, and community. As a result, the formula applied to obtain order was to eliminate the disparities we share, ignore the challenges we face, and eliminate groups of people.

Leaders were fond of philosophical approaches such as Tabula Rasa and demanded “a blank slate”, seen periodically throughout world history. Along with other world leaders, Mao thought to perfect humanity through social engineering.

However, this brought forth an era of misfortune in the arts. Historians state that architecture during the early twentieth century began to lack planning of human scale, green space, or natural light. Conceiving a universal trend for commercial, saccharine, or kitsch is still a desirable concept in the architectural market.

The artistry of Zhu-Pei, Xu Tiantian, and Zhang Ke assert their defiance of using sameness, informality, and structure to obtain peace. They offer audiences a nuanced approach to showcasing uniformity. In accepting what came with the canvas of the space, they weaved modernism into what was salient before. By finding what is common to the region, these architects discovered behaviors and emotions accustomed to the land. With the construction of culture, they created structures resigned to the community.

The pursuit of modernity looks different now. We have designers such as Zhang Ke, Xu Tiantian, and Zhu Pei featured in MOMA’s Reuse, Renew, Recycle exhibition to appreciate their emphasis on environmental relevance in the building process.

Curator of the Reuse, Renew, Recycle exhibition at the Museum of Modern Art. Sterli connects the world to the assemblage of architects in China who standardize the practice of using renewable resources. The collection of models and images evidence the viability of their proposals to utilize materials such as bamboo and brick. Altogether, the exhibition exemplifies structures and substance added to the communities.