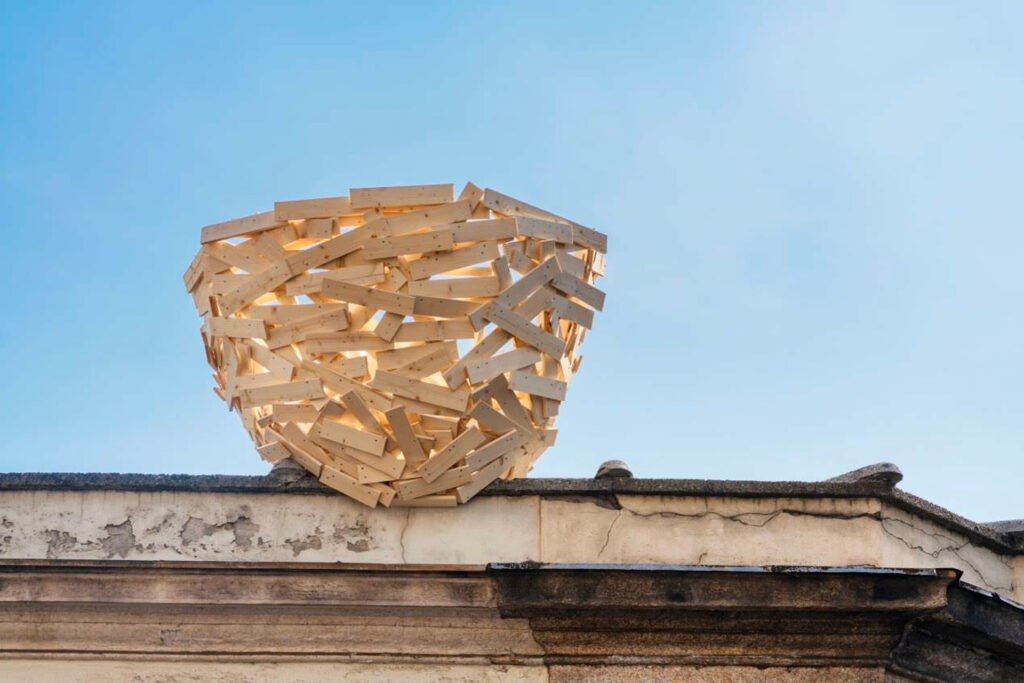 When the recycling of wood and the concept of protection collides: Tadashi Kawamata

A conversation with the artist around the concept of protection from shelters, the recycling of planks of wood and the collaboration with the students from Brera Academy of Fine Arts

1982, VENICE BIENNALE AND THE BEGINNINGS

Tadashi Kawamata started gaining an international public around the age of twenty-eight, when he was invited for the first time to Venice Biennale in 1982. «I started being an artists on 1979 so I was working since three years only, I was very much a young artist». Back then, the event was hosting many avant-garde painters, leaving Kawamata as one of the only installation oriented artists. «1982 has been a crucial time for me, kind of like a paradigm shift. Venice Biennale had been a disappointment but it allowed me to understand I did not want to be mainstream. I started doing private projects and develop my own art, I was lucky it’s been a perfect timing.»

«When I was in high school I had no idea I wanted to pursue a career in the art field. I had a good professor later in art school, and I was inspired from him. He gave me all the information I needed about what was going to happen in the world of art.» When he was still studying, Kawamata started working on his personal projects. This led the critics in Venice Biennale to choose him.

Born in 1953 in Hokkaido, Japan, Kawamata moved to Tokyo at the age of eighteen. «Hokkaido resembles European countryside as an atmosphere, so my childhood has been normal. Tokyo, on the other hand, was terrible during summertime. There are monsoons and it becomes extremely wet.»

After living in Paris since almost fifteen years, Kawamata considers himself more of foreign artist to Japan currently. «For me it’s needed to have a bit of separation from Japan. I really like the distance because it allows me to see the other point of view». Despite that, he still has a few projects going on in his motherland, for which he goes back every summer to work on.

Kawamata taught for six years at the Tokyo University of the Arts from 1999 to 2005, moving then to the École nationale supérieure des Beaux-Arts in Paris. «I know there are many young students who are becoming good artists in Japan at the moment. My art is on the opposite side though, I’m not gallery or museum oriented, I rather work in public spaces.»

Before putting pen to paper, Kawamata’s creative process takes shape while traveling. He usually visits the city or area he’s been invited to work for to better understand the environment. Kawamata not only evaluates the space though, but also the neighborhood, he gets to talk to the people living close by. «I’ve been to Milan many times, but I’ve never created any project over there. So when I got the invitation to work in the city, I accepted right away. I went visiting the gallery and the area around, then met with the staff and the curator Antonella Soldaini.» Kawamata and Soldaini have known each other since many years, after meeting in the US when the artist was living there. The duo already collaborated in the past, back in the US and for a group project for Centro Pecci, Prato.

«To prepare the projects I make many drawings and some mockups models. I always do a lot of sketches planning, it’s very much a work in progress. After visiting Milan I headed back to Paris and started to prepare the models. In the meantime we had videocalls to get some positive feedbacks on the development.»

The art installation of Kawamata was developing when Covid-19 hit worldwide, obliging him to postpone it for two years. The pandemic, having affected the lives of all of us, condemned the artist to remain in France. «The delay and the sufferings of the pandemic made me desire to create something more special for Milan. The nests in Milan are a response to that, a shelter and a protection against the virus.» Kawamata’s installations are a reflection of the need to feel shielded during hard times, something that is extremely contemporary given wartime as well.

Collaboration is a fundamental notion within the installations of Kawamata. «I organized many workshops in the past, and happened to work with students, carpenters, engineers and all kinds of people. I also collaborated with homeless people and with prisoners once, so I know how to manage these situations.»

For Nests in Milan, the artist had the chance to cooperate with some students from Accademia di Brera. «Of course they are not professionals so they are not much skilled yet, and my installations are practical to work on. My assistant was able to teach them how to fix things and with time the group acquired a certain rhythm. It’s hey to understand the mood for the working process. Although the materials were heavy and organic nobody complained and they became motivated to work with me. The weather in Milan was also amazing so it made it easier to work.» To this day, Kawamata is still communicating with the students that had the chance to work with him. Being back in Paris, he invited the students over for some other projects, considering them for works in Japan too.

«Collaboration is relevant to me, because I’m just an outsider to the city I need to work for. When I work with some other people I get more information about the environment. I needed to understand what a city Milan is, how you survive, what kind of life you have there. This is the meaning of collaboration for me, it’s like researching.»

The idea of the shelters heads back to when Kawamata lived in New York for four years. At the time, the graffiti movement was contaminating the art world, developing the concept of working in public spaces illegally. «This was interesting and exciting to me. I started reflecting on the homeless shelters made out of cardboards and scrap because I saw many of them. Making fake homeless shelters became the starting point of what I develop today, but that brought many negative reactions back then.» Kawamata’s first installations were destroyed within a couple of hours every time by being on the street. At some point, he thought that setting a shelter up in a tree would have granted him more security. «The tree huts I make are not the same of those you dream of when you’re a child. The idea refers to bird nests too: that’s their natural way to find shelter. They collect some scrap material, attach it to trees or buildings and find protection that way. Tree huts and nests refers to the same idea, they only differ in shape, but the meaning is finding shelter. Sometimes I make a tree hut and sometimes I make a nest, using the same material anyway.» It happened already that some birds used Kawamata’s artworks as actual homes. The nest refers to the idea of being a parasite object too, absorbing the energy of the building to which it is attached.

It’s interesting to note that the artist education it’s part of a classical painting path. «I didn’t have any skill to work on stone or metal initially, I never studied sculpture. Wood was familiar instead, because of the frame of canvases.» He started from his early artistic experience to use scraps from industrial wood or from chairs and second hand stuff. «It’s also quite easy for me to get wood because it’s everywhere in the world. My installations are temporary and I reuse the materials, but if some neighborhoods decides to keep them it’s easy to replace ruined pieces.» The notion of impermanence is relevant to Kawamata though, he considers forever a utopia. Permanence is in our minds only since nature is changing every second, and we need to stick to its timings. Using and reusing wood is an ecological statement for which the artist cares about.

Kawamata will be back in Milan next fall, September 2022. «When I design a piece, I always plan how to take it down as well.» It is no coincidence that the wood implied at Building Gallery will be reused to create a permanent installation in front of the entrance of ADI Design Museum. Kawamata’s projects create bridges between the past and the present, for which time determines the splendor or decline of an artwork. The artist have been working around Italy quite some times already and doesn’t plan to stop there. «I have two more projects to plan now after ADI, in Italy. I might imply some wood I used in Milan for these projects as well.» Together with the exhibition a series of workshops will be held, in an educational collaboration with Brera Academy of Fine Arts.

Tadashi Kawamata was born in Hokkaido in 1953. He made a name for himself on the Japanese art scene and internationally when still young. Tadashi Kawamata currently lives and works in Tokyo and Paris.

From March 31, 2022 to July 23, 2022 BUILDING will be presenting an exhibition of the work of the Japanese artist entitled Nests in Milan, curated by Antonella Soldaini.