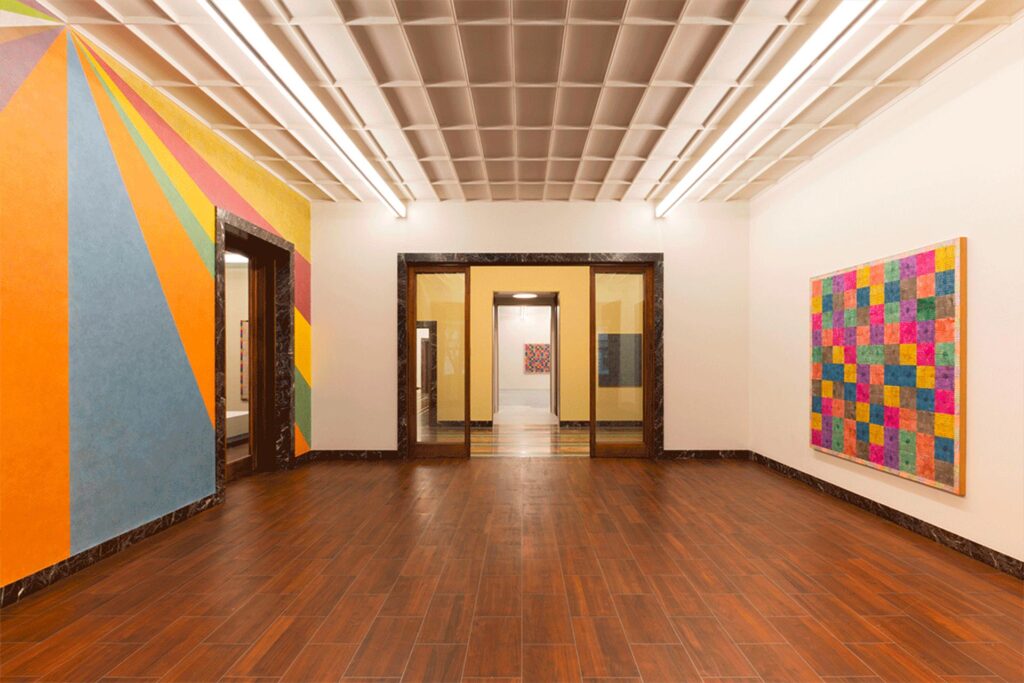 In conversation with McArthur Binion: «my work is tremendously about hands»

«The hesitation is in the way I speak». American artist McArthur Binion challenges Minimalism art history by layering personal objects behind geometric grids

The under conscious of the works

McArthur Binion’s works combine collage, drawing, and painting and go beyond classical autobiographical narration; they are about the author in a primordial way, before language was codified. At a close (necessary) look to his ongoing DNA series, shown in Italy in 2017 at the Venice Biennale curated by Christine Marcel and in the exhibition McArthur Binion — Sol Lewitt by MASSIMODECARLO gallery in Milan shown until February 2022, what lies behind the monochromatic abstractions are his birth certificate, photographs of his birth house in Macon, Mississippi (Healing:work) and photocopies of his telephone address book (Altar work), used from 1972 to 1990 when he used to live in New York as a young artist when he used to exhibit at Artists Space with Sol LeWitt and Carl Andre.

These personal objects are oil sticked and handley painted by the artist using a wax crayon, with both his right and left hand, following a rigorous process. All the connections he built over more than 50 years lay behind the geometrical, yet sometimes imperfect because of a hand-drawn, geometrical grid. More than being interested in the grid itself, he sees it as a shape that leaves space for additional meaning. In his words, «I see it as the space of living we build: you have to have a construct of how you want to live, then you let the experience shape you. Inside the grid, I’m able to incorporate everything I am. I took pictures of my own birth house. I added the address book that I still have with everybody I ever met, I worked with or dated; it’s the history of my social DNA». He believes that if he is constant and repeating, like with the act of drawing the grid lines, he can show the emotional content and use his emotional ‘swings’ (like in music), «leaving more space for the magic to happen».

The artist is also interested in affecting the viewer by leaving him his own space to empathize and build their connection with the works. What lies behind the works, which is only partly legible, is what he calls the ‘under conscious’ of the work: «The under conscious of the work is the core of the work’s emotional content. It’s a very primal idea; everything begins there». The complexity of the layering, of both materials and the emotional content that can be built on, is suggested by the titles: the DNA series could be read as ‘Detroit Negro Artist’, as suggested by the same artist, or Modern:Ancient:Brown with the initials of the artist’s name and surname, adding a playful connection with the power of words and the possibility of construction of meanings.

No wonder the artist started as a poet when he was very young. In his 20s, he moved from Macon, Mississippi, to New York to work for a magazine in Haarlem. Back then, he went to the first museum he had ever been to: the Museum of Modern Art.

The artist remembers:  «There, I saw the painting for the very first time. I noticed that paint had a philosophical nature. It then took me two years to figure out how to transform myself from a very young writer to a painter, to go to drawing class». When he arrived in New York it was the 1970s. The art scene was small, concentrated yet vibrant. According to the artist «it was long before it could even be called the ‘art world’ as we now know it. Art dealers, museum people, and amateurs had the honor to go to artists’ studios. As a young artist, you had different opportunities, but most importantly, you wanted the work to grow, and you worked hard to get it right for yourself; people worked in their studios every day».

Binion is highly influenced by language and music as a fundamental part of the learning process. In his opinion, minimalist artists in the 1970s passed from a cubism obsession to abstraction thanks to music, particularly bebop musicians and jazz clubs, where they learned the power of improvisation in dialogue with the rigorous way a musical composition is built. What McArthur Binion immediately tried to do since his first years as a painter was break the tradition of the history of painting. His works don’t come from art history. When he started using oil stick paintings, they weren’t even called that way, and no one would use them for artistic means. He has always been interested in looking for something unique and recognizable.

In his last exhibition at MASSIMODECARLO gallery in Milan, McArthur Binion — Sol LeWitt, were presented Altar and Healing: work from the DNA series, both made in 2020 during the pandemic period. The artist explains how they are linked to architecture: «I’m interested in architecture, and the earliest use of architecture in my life was my grandfather, a rural architect. He designed and made the house that I was born in. But Altar work came directly out of the pandemic. I started with a work called Healing work that then leads to the Altar work that also involves my father who was a minister».

The Binion/Saarinen works (2018) directly reference the architect Eliel Saarinen, Cranbrook Academy of Art and Museum designer, where Binion spent formative years. Speaking about Sol LeWitt, one of the pioneers of Conceptual art and Minimalism in the 1960s put in dialogue in the Casa Corbellini Wassermann’s gallery space in Milan, McArthur Binion underlines the main difference between their artistic practice and means: «Sol LeWitt’s works don’t have many usages of hand, while my work is tremendously about hands. People that worked with Minimalism in the 1960s-1970s were trying to lose all the emotional content. For me, that’s exactly where I began from, with the emotional content of my life». Since the 1970s, Binion has challenged Minimalism by adding personal content to familiar geometric and bidimensional shapes.

Mc Arthur Binion was one of the first Black graduates of Cranbrook Academy of Art’s MFA program, studying in the Painting department. In the exhibition in Milano was also visible one of his Modern:Ancient:Brown paintings, which is also the name of the foundation the artist created in 2019 to support Detroit’s artistic community, encouraging the intersection between visual and literary arts through grants and seminars, and a residency program for nine selected artists. He decided to help young artists because «no one helped me. I did it myself. It gives me great pleasure to talk about myself and support young, smart, talented black and brown artists».

It’s about the language, other than writing. The language of works that speak for themselves always has something new to say and the will to share and help others.

The artist was born in Macon, MS. He now lives and works in Chicago, IL. Binion combines collage, drawing, and painting to create autobiographical abstractions of painted minimalist patterns over an ‘under the surface’ of personal documents and photographs. Binion received his BFA from Wayne State University, Detroit, MI, in 1971. Binion’s works were featured prominently in the 57th Venice Biennale, VIVA ARTE VIVA, curated by Christine Macel. Solo exhibitions of his work have been organized at Lehmann Maupin, New York, NY (2021), Massimo De Carlo, London, United Kingdom (2019), and Milan (2021). In addition, Binion’s work is in numerous public and private collections, including the Metropolitan Museum of Art and the Whitney Museum of American Art, New York, NY.