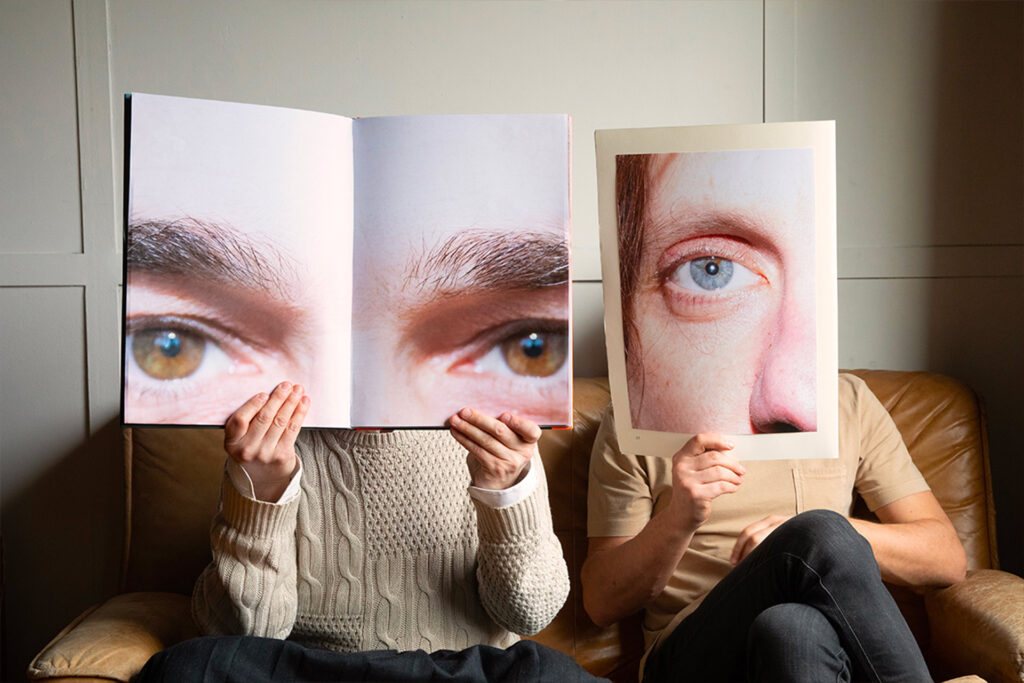 No One You Know, a short movie by the artist Danijel Žeželj for C’mon Tigre new release

Mixing sounds and rhythms from Africa to the Mediterranean Sea, C’mon Tigre and Croatian cartoonist Danijel Žeželj tells us stories of humanity and nude reality

Three years after their last work, Racines, the Bologna-based duo C’mon Tigre is releasing a brand new album at the end of March 2022, entitled Scenario. The duo, which is more of an international collective, open to different artists and formats, has worked over the years with some of the most interesting names in music and art from all over the world.

The clash between sounds and rhythms from Africa, North America, and the Mediterranean sea

The music and sound of C’mon Tigre have their roots in various genres and styles, especially in Afrobeat and funk, but also in the Mediterranean culture. «This fascination for African rhythms and black music has characterized our work from the beginning because of our listening, and C’mon Tigre was born due to that inspiration. Our deep involvement in this kind of music arrived as passion does, like a flash, thunderbolt, and true love for that culture».

The experience of traveling and going around the world, seeing new places, and meeting people have been crucial for the duo. «Also, before our first album, we spent a lot of time away from home, finding inspiration from those experiences».

Then, they come from an Italian port city, and the bustle of the sea is inside them: «At home, we received great inspiration, too. The Mediterranean Sea has wet our feet since childhood. It is a place of meeting and clash culture. The sea brings sounds, people, news, unknown things… From the harbor of our home place, we have seen so many stories pass by, and we have absorbed many of them: at the end, you make it yours, you feel them inside, and they make you feel at home».

C’mon Tigre makes multicolored music, full of different nuances and references, that blend in an original formula. «We draw from many genres, and we should mention too many names. In our listenings and albums, a life is nestled: we love many things, from hip hop and rap to noise, from funk to Afrobeat. If we had to make a single name, choosing an artist who has left a mark in our path with his work, it would be the name of Mulatu Astatke. His idea of music, his idea of music has to do with sharing, rituality, and communion. We try to pay homage to cultures other than ours, without appropriating them».

The music identity of the band is unique thanks to the talent to rework and mix things from different origins. «We mix different things, for example, our first passions with more recent North American stuff, so we can dirty and contaminate our idea, making it more contemporary but keeping that ancient and popular flavor. We love Californian drumming, the music from the San Diego area, many artists like Flying Lotus, Gonja Sufi, The Gaslamp Killer. Live music, sampling, electronic beats with roots in hip hop and rap: this part is significant for us. Our main idea is that mixing different things is generative, ameliorative, as also in human communities, exchanging always brings something new and very often better».

Working as an international collective

Because of restrictions and immobility of the last two years, due to the pandemic, the Scenario was written and recorded in a shorter period than usual, despite more time available. «Unlike usual, this time we didn’t have many opportunities to move and look elsewhere, but we hosted many musicians, artists and technicians in our factory in Bologna, where we usually work, play, record, and rehearse for concerts. We don’t like to keep doors closed; we want to open ourselves to new experiences».

On this album, we can find a small group of musicians who have worked with C’mon Tigre since the beginning, such as the vibraphonist Pasquale Mirra, the clarinetist, and saxophonist Beppe Scardino, the trumpeter Mirko Cisilino and the drummer Marco Frattini. «They are our family, and we have worked with them many times, but for Scenario, we also collaborated with Colin Stetson, a Canadian-American saxophonist, Mick Jenkins, the singer and songwriter Xenia Rubinos, and the Italian experimental jazz trombonist Gianluca Petrella». The international experimental jazz scene has always been a pool of exciting collaborations for the duo, and some of these names prove it.

The collaboration with the photographer Paolo Pellegrin

In each C’mon Tigre album, there is some element of change, experimentation, and innovation, compared to the previous one, also due to collaborations. «This time, the element of change was that we found ourselves in front of a human material even more than a musical one, thanks to our collaboration with the great photographer Paolo Pellegrin. It has been a very intense encounter, so we decided to work together on several things. This album, Scenario, is just one of our collaborative projects, but the others haven’t seen the light yet».

Full member of Magnum agency since 2005, published in many leading publications, winner of many awards, Paolo Pellegrin is one of the world’s leading photojournalists who has documented many of this generation’s major disasters and conflicts, from revolutions to wars to tsunamis: the vinyl of Scenario is accompanied by a powerful book with his pictures. «In this new album, we tell stories and human events from reality, so it is concrete, more about reality and less about imagination».

Scenario, a word with different meanings

Scenario, the album title, is a versatile word. It is related to beauty and imagination, theatrical representation and cinema, art and performance, but we are used to combining it with dramatic events, such as war. «This word, “scenario”, seemed perfect to us to describe the encounter-clash between our work and Paolo Pellegrin’s one. It represents a situation frame. It has the power to blend reality and imagination, blurring the line between performance and real life.

But, then, it also represents the result of our collaboration in a sober way because it deals with many project elements. Pellegrin’s pictures are powerful because he is present in every human or natural disaster, and his eye mostly sees catastrophes. We didn’t want to describe the present moment, but we would like to tell all the shades of humanity through Paolo’s eyes. The scenario is a word that embraces and describes all of this».

The visual dimension of music

As the past albums and this collaboration with Pellegrin proves, the visual dimension is an essential part of C’mon Tigre’s work. «We have several friends who work with visual arts, some of whom are very close to us, so we absorb their works and influence. Although our music has a great and strong visual array, it is easy for us to combine our music with images. It is a close relationship: sometimes our music calls up images, other times images inspire our music. They are two forms of expression running in parallel because they belong to us. If music has powerful visual equipment, its message is stronger and impactful».

An art short movie for the new single

The single No One You Know is sung by the American singer, songwriter, and multi-instrumentalist Xenia Rubinos, a longtime friend of C’mon Tigre, who has also written melody and lyrics.

The video for this song, an evocative animated short film, has been realized by the artist Danijel Žeželj, a cartoonist, illustrator, and graphic designer from Croatia. He has been a very close friend of C’mon Tigre for many years, ever since he lived in the USA, but now it’s easier for them to work together because he came back to Zagreb, his hometown. «Danijel Žeželj is a close friend, we have already done many things with him, even concerts with his live painting. For this video, we left him carte blanche, just giving some initial suggestions. Working with such a great artist, you have to give him full freedom».

For Žeželj, the inspiration was the song itself, the combination of music and lyrics. «When preparing the video and animation, I looked for a story that would reflect a feeling of loneliness, the mistrust, and fear of the other, and at the same time the need to communicate, to share, to break the wall of isolation and solitude which we all are familiar with».

Watching the short film No One You Know, we receive an intimate message coming from images and colors and the story. As the artist says: «The feeling of loneliness is a fundamental part of every one of us, but equally fundamental is the need to connect with another. Those two opposite impulses create a drama that affects us and shapes us daily and throughout our entire existence. The video and animation are monochromatic, almost black and white, emphasizing this contrast and clash of opposites. The red color symbolizes the emotional need for contact, relationship, closeness, and letting go of the fence that isolates and protects us».

The music of C’mon Tigre and Danijel Žeželj’s work has something in common, for example, a vision and a narrative drive, as he acknowledges. «I’m not good at analyzing music, I’m just a listener and big fan of their work, but to me, each song of C’mon Tigre carries a story, as if every composition, even when without words, has a narrative line. And that is very close to me, because all my work is built around storytelling through images, while they create their atmospheres and stories through layers and layers of sounds and textures. But this narrative dimension of their music, a song as an emotional journey, is inspiring and a beautiful gift».

Music duo based in Bologna, Italy. They work as an international collective, open to different artists and formats and they have collaborated over the years with some of the most interesting names in music and art from all over the world. Their brand-new album, out at the end of March 2022, is called Scenario.

Croatian cartoonist, animator, illustrator and graphic designer. Author of numerous graphic novels and animated films, he is considered one of the best living artists. Žeželj’s comics, books and illustrations have appeared in magazines and anthologies in the United States, England, France, Italy, and many other countries.