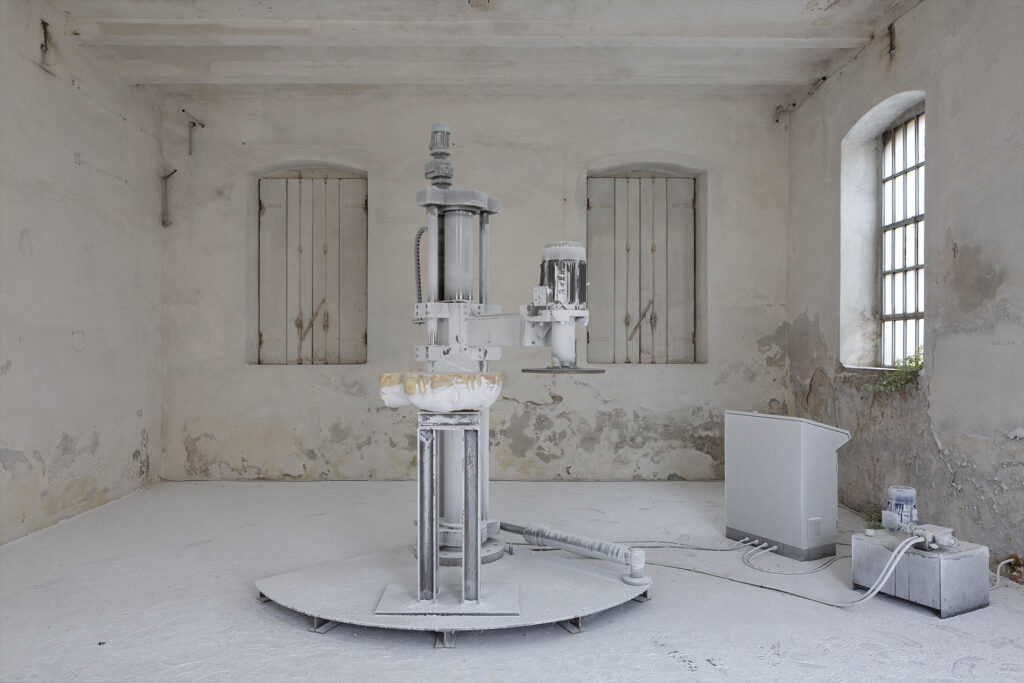 Revising Caravaggio in Malta, achieving the carbon neutrality certification for an artwork

Arcangelo Sassolino will be present at Venice Biennale 2022 with Diplomazija astute. A kinetic art installation which will turn the Malta pavilion into a place of mixture of Biblical narratives

When you find yourself in front of Arcangelo Sassolino’s installations it is clear that in his body of work the line dividing art and technology is more labile than ever. The big-size and technically challenging works of Sassolino stem indeed from the interpenetration between art and physics. As a former toy designer, Sassolino created a three-dimensional puzzle inspired by the Rubik’s Cube which earned him international recognition and a job at Nextoy LCC in New York. He approached the art world for the first time during his years in the Big Apple.

Once he returned to Italy, he started to apply the laws of physics and mechanics to his creative production, giving rise to a visual poetics characterized by an industrial mold design. Because of their high-level of complexity and precision, all Sassolino’s works are researched, planned and designed together with a team of engineers and experts. Edoardo Monti, curator and collector who supported Sassolino along the production process of Diplomazjia Astuta, claims: «The artworks of Sassolino bring together people’s feelings with brutal realities. They distill natural forces – such as pressure, strength, gravity, speed and tension – in visceral emotions difficult to replicate».

At the core of Sassolino’s creative production is material research. The industrial materials employed by the artist range from stainless steel to concrete and glass, which he pushes past their physical limits, creating devices which generate inorganic performances. «I aim at releasing sculpture from the problem of the form», Sassolino explains. By transcending the pure formal aesthetics of his devices, he provides his viewers with both physical and emotional experiences provoked by the manipulation and contortion of materials which remind of the transience of life and the frailty of human condition.

Sassolino’s experiments take place inside his workshop: a former spinning mill located in Trissino, in the surroundings of Vicenza, where he was born and raised. Being the province of Vicenza a vital industrial area of Northern Italy, Sassolino has the opportunity to interact with numerous laboratories and firms capable of creating hyper-technological machines and engines. Spread over multiple floors and buildings, it hosts most of his works and current experimentations.

In Untitled (2008-16),  a wooden beam is held by two steel cables against a piston rod. The slow and at the same time implacable force of the hydraulic system put to the test the resistance of the wood, eventually destroying it. The whole performance is accompanied by the crackly noise of the wood which reaches the ears of the audience as a last death song. Similarly, in Piccolo Animismo (2011) a turbine blows air into a parallelepiped made of welded stainless steel increasing the internal pressure and deforming the container.

The changes in structure occur simultaneously with sudden rumbles. As confirmed by the artist, the aural element of his works plays a key role in his performances: «In my installations I do not look for sound, I do not create it. But I am aware that it will come as a natural unpredictable consequence». In Damnatio Memoriae (2016) Sassolino addresses the issues of memory and time by subjecting a copy of a marble statue of the Capitoline Museums to the activity of a milling cutter. «Memory is erased by time, while matter is carried away by the wind in a cloud of white chalky dust», Sassolino explains. Matter is also subject to a change of state in D.P.D.U.F.A. (2016) and in The Way We Were (2018).

The first work consists of a glass bottle set inside a steel case protected by polycarbonate and connected by a tube to a nitrogen bottle. The pressure increase caused by the gas slowly entering the bottle eventually results, without any advance warning, into a loud explosion. The suspense caused by the expectation of the sudden shattering generates a feeling of estrangement in the viewers, who find themselves in a sort of suspended time.

In The Way We Were (2018) the transition of matter from solid to pulverized is made possible by a metal press crushing rocks of different dimensions. Finally, one of the biggest rooms of Sassolino’s workshop hosts Afasia (2008), consisting of a target shooting in which bullets are replaced by glass bottles fired against a steel sheet at 970 km/h thanks to a pressured-gas device. «The machine gun and the strong impact of the bottles transport the spectators into a fascinating and heartbreaking war dimension», the artist claims.

Sassolino will participate in the Venice Biennale 2022 with Diplomazija astuta (2022): a huge-size installation inspired by the artwork Decollazione di San Giovanni Battista (The beheading of Saint John the Baptist). The artwork – thanks to which Caravaggio received the honor of the Maltese Cross – was painted by the Italian artist during his stay in Malta in1608 and it is still kept in the Oratory of Saint John’s Co-Cathedral, La Valletta. The work of Sassolino will be complemented with the creative contribution of Maltese composer Brian Schembri and his brother, the poet Giuseppe Schembri Bonaci. Through the immersive conceptual installation, the Maltese pavilion – curated by Keith Sciberras e Jeffrey Uslip – will put in dialogue the ancient biblical narratives with contemporary culture and will celebrate the long-lasting cultural relationship between Italy and Malta.

The big size of the canvas (361×520 cm) as well as the detail of the signature “F. Michelangelo” (the F to indicate his brotherhood in the order) gushing out from the neck of Saint John make the The Beheading of Saint John the Baptist. By transposing the zeitgeist of the Oratory of Saint John into the Maltese pavilion, Sassolino invites the viewers to make themselves witnesses of the tragedy and the brutality of the martyr’s execution.

Recurring to induction technology, Sassolino’s kinetic installation will produce drops of molten steel which will fall from an overlying structure into seven black tanks filled with water, each representing a subject of The beheading: the undeterred jailer, the executioner who prepares to strike the final blow, a young woman carrying a basin on which she will collect the Baptist’s head and an old woman with her hands to her face in horror; on the right two prisoners watch the scene from a grate. The incandescent drops, coming into contact with water, hiss, cool down and disappear into the darkness. As in all Sassolino’s works, also in Diplomazija astuta every detail is perfectly studied to surprise and fascinate the audience: recurring once again to the symbology of number seven, the drops of molten metal will generate a symphony by falling into the water like musical notes on a staff.

The experiential installation will be completed by a huge black steel plate of the same dimensions of Caravaggio’s canvas on which Schembri Bonaci engraved in Hebrew, Aramaic, Latin, Greek, Maltese, Italian and English lines from Psalm 139. According to the curators, in the 285 square meters of the Maltese pavilion, with exposed brick walls, Diplomazija astuta will create a spiritual space where the public will feel immersed: «Sassolino’s intervention invites the audience deep into the very heart of the work, capturing the delicate balance between emotional intensity and austere stillness».

In line with modern times’ principles of green transition, the Venice Biennale 2022 will aim at extending the achievement of the “carbon neutrality” certification, obtained in 2021 for the 78th Venice Film Festival, to all its activities and programs. For this purpose, Susanna Sieff – sustainability advisor designated Head of Sustainability of the next winter Olympic Games taking place in Milan and Cortina in 2026 – was appointed to develop a thorough study aimed at mapping and reducing the CO2 emissions generated by the long and complex production process of Diplomazija astuta.

«Everything must be taken in consideration: from the number of e-mails exhanged to the materials employed and the physical installation of the work», Monti explains. Sustainability goals played a role also in the choice of materials. Steel, for instance, a material intrinsic to the modernity of the twentieth century, is 75% recyclable. The curatorial team ensures that the cooled and solidified pieces of molten metal will be collected from the tanks and re-used for other artistic purposes. Diplomazija astuta will tackle the themes dear to Caravaggio through the contingencies of modern life elevating art to a potential guide capable of accompanying us in the complex vicissitudes of time.

Sassolino was born in Vicenza, Italy in 1967, where he lives and works. Sassolino’s work stems from the interpenetration between art and physics. His interest in mechanics and technology opens up new possibilities for configuring the sculpture. Sassolino has held solo exhibitions at the Contemporary Art Museum of St. Louis, USA; at the Frankfurter Kunstverein, Germany; at the Palais de Tokyo in Paris, France; and at the MACRO Museum, Rome, among others.