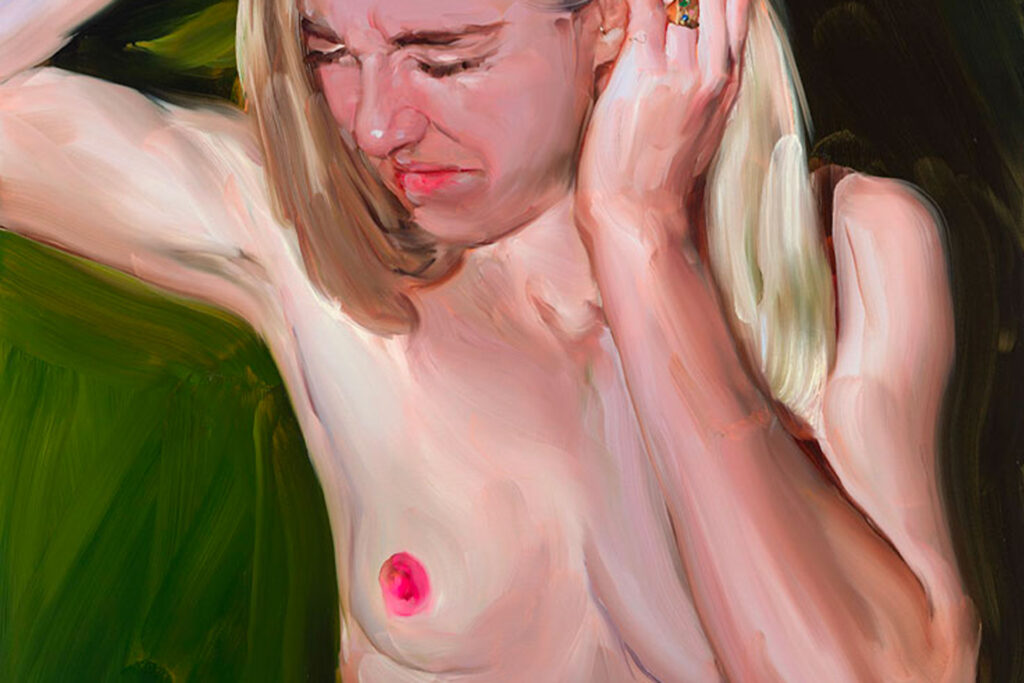 I’ve always painted people I know and who are close to me. It wasn’t a leap. My paintings of my partner, Mackenzie Scott, started in a gradual way. At the beginning she was a stand-in for specific ideas, and then I was using her more as a model. Later, I became interested in trying to depict our relationship, because it became clear that this was something missing in my narrative and the narratives that exist in the history of painting.

The paintings all begin from a photographic source. Our memories are affected by photography’s visual language. I allow my artwork to deviate from the photographic source, elements will warp or the painting will have parts that are made up. This is similar to how a memory might sit in our mind: photographic at the root, but with changes made by the brain along the way.

The large paintings are meant to be seen for what they are: ‘simple constructions of intimate moments’ that are not genuinely intimate in nature. I take photographs of configurations of our bodies that may not look real when painted, but there is an essence of intimacy to them.

The smaller paintings come from moments of our daily life. You can tell this by the lighting: the large paintings have glaring artificial light and imagined backgrounds, whereas the small paintings tend to be more domestic. They are voyeuristic, as they start with me taking photos of Mackenzie, when she is not aware of me doing so.

I can see a moment unfolding like a freeze-frame in a film or a moment that is paused, and when I can see it as a painting, I capture it in a photograph and fle it away as a potential project. Scopophilia [e.d. in psychology is an aesthetic pleasure drawn from looking at culture, an object or a person] is at the root of why I started making art in the first place.

I’m a person who likes to look. I’ve always been that way – the kid with a staring problem who would get caught looking for more extended periods than they should. In our culture, everyone is presenting themselves as something. I’m interested in what images we consume of other people, since they’re all constructions. I use the phrase ‘scopophilic feedback loop’ to describe my paintings, because I make my work from the perspective of a person inhabiting the body of a woman who has experienced what it is to see and be seen.

The work is about making the female body a non-benign object. I’m doing something that is layered, yet the interpretation is pornographic. Alternatively, a painting that isn’t sexual will be interpreted as such because it is of two naked female bodies drawn together.

I’m a queer artist and my subject is my partner

That is the point I’m trying to make in my larger, more recent paintings, where the configurations of the naked bodies are improbable and non-sexual. It’s a matter of making people look at what they’re seeing and not jumping to conclusions. There are crazy things happening in the background, two naked bodies on a raft in a stormy sea. Here, the idea that I’m portraying sex is improbable.

When people get stuck on sexuality, they stop digging deeper into other layers. I also face the opposite problem: in some of the smaller, more sexually explicit paintings I’ve made, people can’t fathom that women are having sex with one another. They tend to think the subjects are just friends.

I’ve had exhibitions where the audience has come away not understanding that I’m a queer artist and my subject is my partner. I use beauty as a Trojan horse to draw people in, and then I can knife them with something challenging. Humor can work too. Exaggeration is the tool of Camp and comes from a place of loving something to the point of exaggeration.

the relationship between Camp and the History of queer art

That is a key aspect of my work: the relationship between Camp and the History of queer art. I love the way Susan Sontag talks about it. The nipple is a fraught body part. It’s ridiculous that it gets censored. I want to increase the ability of the viewer to feel self-awareness or self-consciousness in the act of looking at a painting of a naked body. Breasts and nipples are something that we’ve trained our eyes to skim over and not look at.

I skip throughout time when I’m making a painting

The bright pink of the nipples in my pieces makes it impossible to look away – you are irritated that your eyes keep returning, because you’re trying not to look. I want to mess with the societal training we’ve all absorbed. Sometimes, nipples are light sources that give the painting an otherworldly, sci-fi touch.

People may look at my paintings and think that I am a trained painter, but no-one has ever taught me how to paint – it’s an accumulation of techniques that I have accrued from looking at the whole history of painting on my own. Painting is a language that I’ve learned to speak by picking up phrases from every period along the way.

When I was young, I was into Flemish painting, which is tight and precise; later I was into impressionist paintings – it was the Eighties, and they were big at the time. Along the way, I’ve looked at every period of art history, taking things that are meaningful to me and synthesizing them into the way I paint now. I skip throughout time when I’m making a painting.

A figurative painter who employs Camp as an aesthetic strategy and impressionist techniques to explore her queerness through art. Her paintings have been showcased since late 2019 at galleries like Fredricks Freiser – New York, GNYP -Berlin and Massimo De Carlo – London. Her earlier paintings are representative of trying to break free from the historic mould of using female bodies as objects in artistic works and progress into an intimate depiction of female relationships and queer love.