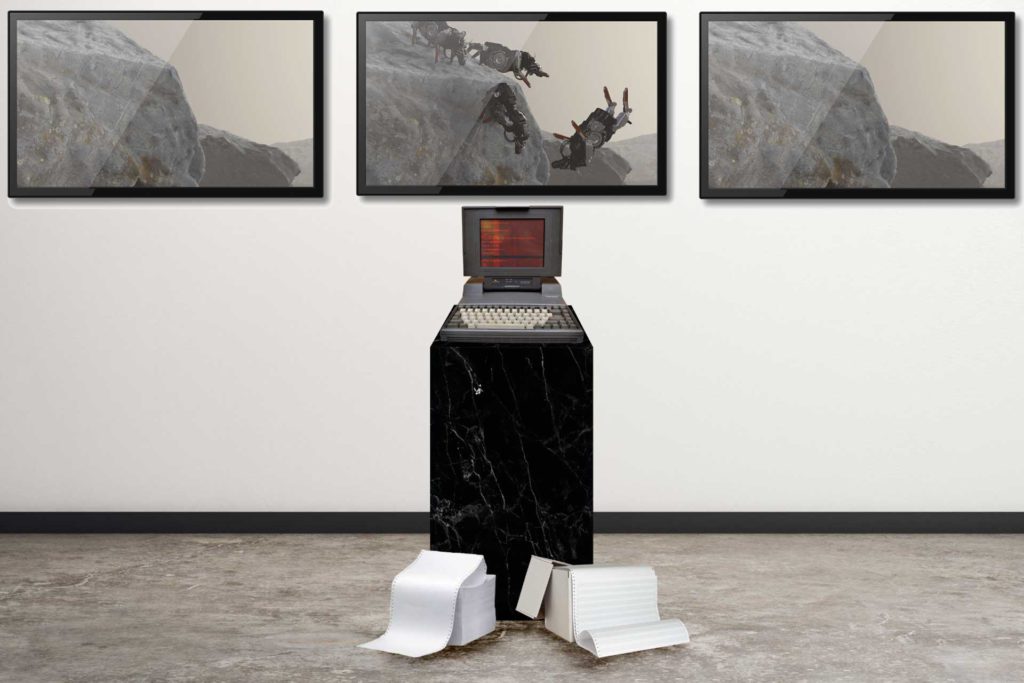 ReA! Art Fair, Milan. History as a teacher of life: in today’s art it is worth little, but it is not a lack of respect

How contemporary artists’ approach to art history has changed: emerging artists who change the canons with respect to traditional art

The history of art today

There is no longer that history teaching you life and accompanying the critical sense of the public and of the artist for whom it was easier to judge a work as appropriate or not. We have an exception with Francesco Gioacchini though, one of the artists present at Rea! Art Fair in Milan. He explains how both of his works hanging at the event are quotes from the most famous art history textbook. «The portrait of Julius II della Rovere was born as a meta-pictorial reflection. As children, we started sketching and making drawings on sheets of paper or on the desk. Out of boredom and to escape from the institutional environment of education».

In turn, the second work also «starting from the green desk of when one is a student, with a note sheet in the middle, to get away from the lesson, one vents boredom and manifests a more irrational part here presented by a primitive stylized man hunting a bull, a cow or a horse as in the wall paintings of Lascaux (one of the first works every student looks at in textbooks)».

The works in question are Julius II (2020) and We used to draw on the table (AAAAAAAHH) (2020). The former is a clear reference to the portrait of Pope Julius II Della Rovere. Masters such as Michelangelo and Raphael (mentioned here specifically) celebrated the historical figure. He was famous for the renovatio urbis and one of the most prolific patrons of the Renaissance. The artist represents him off-center on the right, framed with scotch paper on the canvas, squared like a notepad. Scribbles and watercolor proofs, just those used to portray the pope, surround him. While, in the latter, the artist inscribes primitive motifs of a stylized man hunting buffalo, with pastels, oil and pen.

With the beginning of September, Fabbrica del Vapore in Milan sees the presence of one hundred international emerging artists, under the banner of ReA! Art Fair. The fair exhibits their works in a historical memory of the city, built in 1899 by the company Carminati, Toselli & C. The establishment has become a symbol of Italy’s industrial development in the late nineteenth century.

Subject to redevelopment, the space has long been part of a project to encourage youth creativity. The Municipality of Milan owns it, while Area Giovani, Università e Alta Formazione takes care of the management. In the past, other exhibitions and events such as Love Design, in support of Italian cancer research, Festival del Silenzio or Inside Magritte e-motion exhibition have taken place here.

The fair is inspired by the original purpose of the Biennale. That is to celebrate emerging artists who do not have the means to spread their work and their creativity as a gallery or a museum, in the various forms to which contemporary art is facing today. Painting, sculpture, photography, digital art, installation, performance as well as street art. ReA! Art Fair aims, therefore, to allow creative minds not yet established at an institutional level to enter with a certain constancy in a ‘traditional’ or ‘institutional’ exhibition venue. To have a home where they can show themselves and face the art public.

Further, the City of Milan and the Cariplo Foundation are the sponsors of the event, organized by an all-female team, with curators Maria Myasnikova, Milena Zanetti, Laura Pieri, Paola Shiamtani and Pelin Zeytinci.

From painting, the most recurring medium already mentioned with Francesco Gioacchini, we pass to works of photography. These include the shots of Francesco Pozzato and his Earthquake Baroque (al-Hassan mosque) (2021), to the large installation, located at the entrance of the site, with a mixed media canvas hanging from the ceiling for both floors of the structure, by Edvige Cecconi Meloni entitled In the end what remains, is still a thought (2021). This is a site-specific work consisting of a black monochrome canvas as a base. It also presents drawings and phrases similar to the ones of children with colored chalk on the blackboards at school.

Another constant presence at the event is sculpture, with plastic works by artists such as Giulia Seri with Sphinx (2020), made of bread and wax. A sphinx with rough connotations and a human face, eyes staring ahead, blood-red like its left paw. We also see Vladimir Matei Colteanu’s composition entitled Was there even a Dragon in the fairy tale (2020). It features a stylized representation of a bony dragon with a face à la Osvaldo Licini and his Fallen Angels, moving in a gray lava soil dotted with blue-colored flowers and plants.

There will also be a rich repertoire of talks and performances in this three-day event. Artists such as Luan Machado and Eyerod collective will participate in them. Further, debates on the curatorship of emerging art, digital, new trends between art and technology and, finally, the phenomenon of collecting are going to take place.

The green at ReA! Art Fair

Among all the debates circulating among us today, the most analyzed theme of today is eco-sustainability and the need for a rediscovery of nature as a way of life and action. Ample space is therefore left to the green and natural element. This starts from the works of Ilaria Simeoni, All’ombra dell’aiuola dei fiori di giglio (In the shade of the lily flower bed) (2021). Proustian name for an oil on canvas very close to the representations of forests and woods by the Doganiere Rousseau at the end of the nineteenth century. A luxuriant nature dotted with red flowers and brightened by a light glimmering sun characterizes the artwork.

Chiara Ressetta with Le forme della memoria (caco in pineta) (2021) mixed media on canvas of a linear and minimal nature, between water and unidentifiable human figures similar to the paintings of the French Rouart. The minimal and delicate composition by Marta Longa, Ricucio (Ferite Aperte) (2021) features dried sage leaves and cotton scattered on a candid surface. Noemi Mirata’s RESISTENZA Salicornia (Salicornia Resistance) (2021) is a duo made up of oil on printed canvas. In it we see an abandoned industrial space on which sinuous and idealized evergreen plants grow. The whole stands vertically on an underlying sack filled with earth and pierced by the sprouting of recently born saplings.

The outcome of ReA! Art Fair second edition in 2021

One of the intentions of the organizers was to create a space exhibiting works of art. But they also wanted to develop a cultural forge in which artists, collectors, performers, visitors and scholars mixed and interchanged, debating on the meaning of the works and the state of art today.

From Rea! Art Fair we can see that there is no longer a more conventional type of art and a secondary one. Because although the artists exhibited here are called ’emerging’ in quantitative terms, they are certainly not so in qualitative terms. They very well show, in fact, the fragmentary nature of artistic intent today and the undisputed conceptualization of the work of art as an expressive medium of something else than tangible reality.

The association of ReA! Arte joins forces, and the necessary funds, to give voice to the representatives of this course that art has taken, with prizes in money and in visibility. It also grants further exhibition spaces to those artists who still do not find a home.

The fruition of art

Reflections on the state of contemporary art have always been a constant issue in the literature and philosophy of art. From Vasari to Hegel onwards, the thin line that differentiates art history from art criticism becomes less clear and defined. It therefore results in one analyzing an artistic artifact and expressing critical judgments. These concern the actual state of reality to which the work itself refers to.

Hegel spoke of the death of art, the end of a certain type of approach to art, no longer canonical, and the worship of the work (especially of sacred theme) as a direct manifestation of the sacred itself, since it was the work that was moved from its place of worship, the church, and then placed in a museum. A new place of enjoyment of art. Today, we are at a further step. The works leave the museum and then no longer find a permanent home. This is the case for those artists who are defined as ‘emerging’. That is, not yet considered ready or sufficiently consecrated to be in museums and galleries.