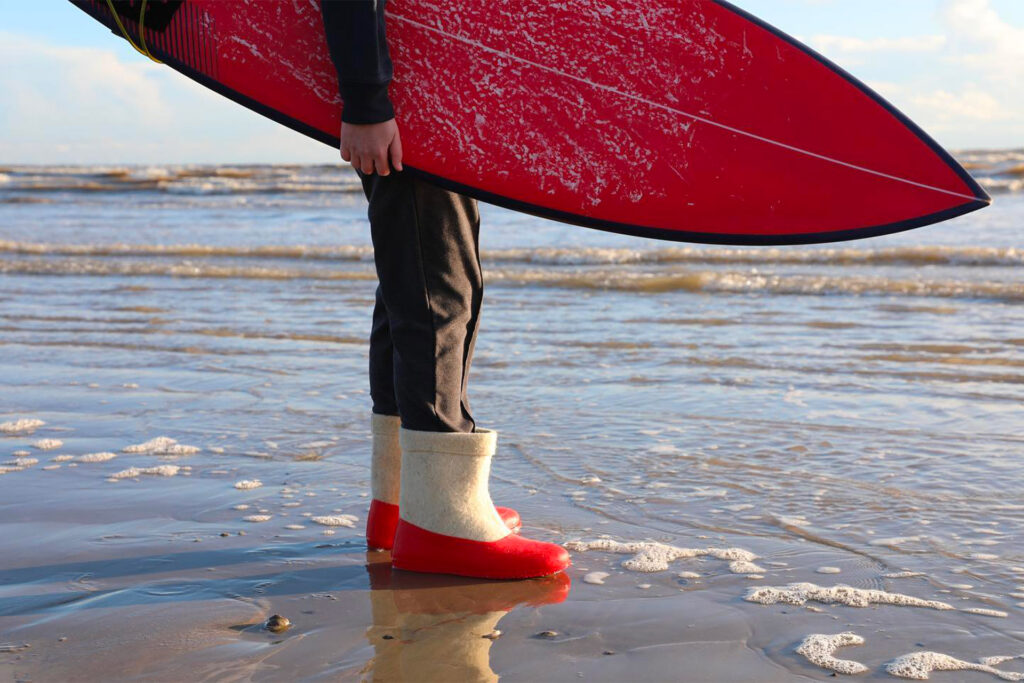 Is the felt industry sustainable? The case of Voylok shoes made by mono-materials

Made avoiding the use of dyes, bleach, stitches or glues. By-products from production, such as wool scraps and muddy water, are turned into fertilizers for farmers

The story of Voylok brand is quite singular, explained Marketing Director Bronwen Foster-Butler told Lampoon. Entrepreneur and founder, Andrej Petrov, would wear old Russian traditional boots called the Valenki. He wondered why they had never left the country. The Valenki factory was shrinking because the only functioning factories were located in wild and remote parts of the country.

Subsequently, the boots had never been modernized properly. The traditional shoes are made in the same old fashioned way; they’re thick and heavy with no sizing. You just have to try a bunch until you find the one that fits you, making them unadaptable to everyday life. Petrov’s intuition was to bring back this product. It has the potential to revive a shrinking industry. Petrov started and got the attention of an investor, who saw the product and a business opportunity.

Felt is a textile material that is produced by matting, condensing and pressing fibers together. It’s considered as one of the best insulators available and has different applications, from designer architecture to upholstery. It’s a compact and waterproof material, resilient to wear and tear, and is fire protectant. Depending on the blend of the fibers on the inside, felt can or may not be biodegradable.

It can be made of natural fibers such as wool or animal fur, or from synthetic fibers. This includes petroleum-based acrylic, acrylonitrile or wood pulp-based rayon. Made from wool, the manufacturing process has a low environmental impact compared to other man-made or natural fibers. It also has a significantly longer lifecycle than other materials.

Voylok boot is made of mono-materials: wool, hot water and a removable rubber overshoe. One of the workshops will be located in Kazakhstan, with the potential for some supplementary ones in Finland. The majority of the factories were situated on rivers to get hot water.

This is used to shrink the wool, make the felt and take advantage of hydroelectricity. The workers take bales of wool that arrive in blocks. The majority is sourced from local smallholding farms and the other share is taken from nomadic herds people. Once collected, the wool is laid down onto tables and then worked, adding hot water to make the wool shrink.

«The felting takes about five days. Once they obtain the desired density, the boot is shaped over a last, a foot mould we created for ourselves. The boot is beaten with sticks to get the desired shape. Then they are dried using kilns powered by hydroelectricity, biomass offshoots that come from the wood industries nearby. The water we use, since we don’t use dyes, returns to the municipal system. The mug that comes from the wool is given to farmers to make a great fertilizer», explained Foster-Butler.

The problem with rubber

When it comes to recycling shoes, the problem is that they’re made up of several elements. These include glue, plastic, rubber and laces that are impossible to separate. «Voyloks are made up of only two parts that can be easily separated. This allows rubber to go to recycling. Since the boot is unadulterated wool, it can go into your garden and will compost», told Foster-Butler.

In a study conducted by WWF, when rubber is produced responsibly it increases biodiversity and carbon sequestration. This reduces carbon dioxide emissions from deforestation. It also avoids human and labor rights violations, as well as land grabs. New Chinese rubber industry guidelines could play a key role in tackling land grabs and deforestation.

The Chinese market is one of the most polluting and labour-intensive to date. Off the shelf solutions from these suppliers are a good compromise that offer good quality and a little investment. However, they’re not the optimal choice when it comes to environmental care. What’s good about Voylok’s rubber overshoes is that they’re mono-material. They can go into post-consumer rubber recycling in its entirety.

«We don’t believe that a brand can truly be sustainable under capitalism. Ultimately, our goal is about raising consciousness for consumers to purchase less. Our Voylok boot is expensive too so it should be a considerate purchase,» continues Foster-Butler. Voylok are designed to last years as felt is a very durable material.

In terms of sustainability guidelines, the start-up is guided by two of the USDGs  (12 and 15). These are responsible for production and consumption, rewilding and biodiversity. A full Carbon P&L is published every year. The prospect shows that they are carbon neutral, aiming to get to carbon negative in the next future.

is a company founded by entrepreneur Andrej Petrov. They produce felted boots inspired by the Valenki, traditional Russian shoes. Made from only locally sourced raw wool and hot water, the boots are fully biodegradable and compostable. The brand is also engaged in other sustainable practices which include offsetting their carbon emission.