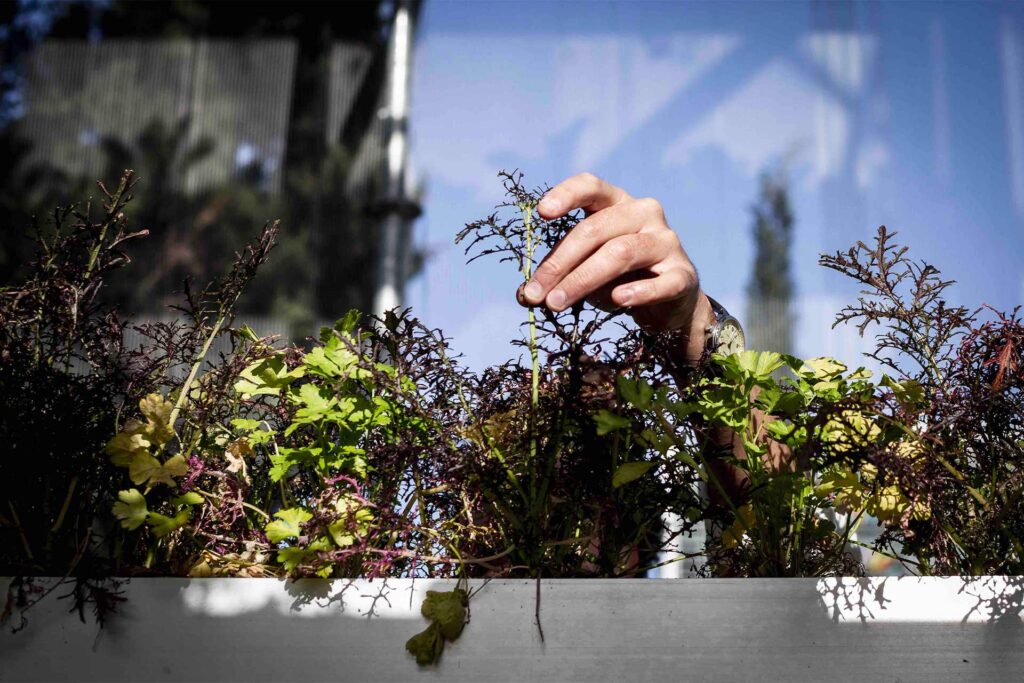 Upfarming and solutions to a global famine

One of the many ideas to combat this crisis is through vertical farming. It is a soilless agricultural technique that aims to produce more food. Working to optimize plant growth in controlled environment spaces; It is an elaborate way of providing protection and suitable growing conditions. This is throughout the development of the crop, which is arranged in vertically stacked layers. Lisbon based company, Upfarming, challenge traditional methods of farming in Portugal. They do this by creating rotating vertical farming towers. According to them, the project utilizes fifty percent less energy, fifty percent less labor and ninety percent less water. Bruno Lacey is Upfarming’s operations director. Tiago Sá Gomes is a  member of the company’s design team. They walk us through the project in detail.

Gomes commences, «we are definitely the first ones in Portugal to try to do this. At least at the scale with this focus. Not to mention that it is different to go for a private vertical farming system than any other». The project’s vertical towers are designed to rotate throughout the day. This is to ensure that all crops get the same amount of light. They are watered regularly at the base of the system.

By the year 2026, the vertical farming industry is predicted to be six times bigger than what it currently is. This soil-less technique uses no pesticides and herbicides. It recycles water with less waste. Plants are able to grow and harvested all year round. This is free from adverse weather conditions such as drought or flooding.

With Lacey’s visions for the future, Upfarming is hopeful to break the traditions of conventional farming and consumer habits. «As a company, we don’t use synthetic fertilizers, pesticides or herbicides. This includes all other major issues that needs to be addressed in conventional agriculture. What we would like seen in the future is to be able to use greywater. It would be treated in a standardized way and use that to feed the crops. Becoming water neutral, reducing water and stormwater run-off which then in turn affects greenhouse, energy and chemical footprints».

It is anticipated that by the year 2050, the world will hit a total population of nine billion people. With a predicted two thirds living in urbanized lands, this will pose a great strain on food supply chains. This is especially given the current climate change crisis that we are facing. According to the Food and Agriculture Organization of the United Nations, food production must increase to seventy percent.

This has to happen before the year 2050 in order to meet global food needs. Average global food prices have risen by 2.6% annually over the past couple of decades. If such a rate continues to rise, it would threaten mankind’s overall food security. The rising food costs reflect the underlying trends leading to the failing system that is traditional agriculture.

Sustainability is of high concern for consumers and companies alike. Vertical farming techniques offer an integral role in sustainability efforts and the greater good of the planet and mankind. There is a continued rising demand for organic and pesticide free foods. This is an essential method into cutting down costs on imports achieving food security. Lacey clarifies that they even work with chefs and hotels to create seasonal menus based on the crops planted.

«Our version of farming is a service. We enable institutions to grow large amounts of their own food creating a sort of turn key solution. This is by working with schools, hospitals, prisons, hotels, community centers, private condominiums and corporate headquarters. Whatever it might be; an institution that feeds its own population of 40 people, 400 people or 4000 people. We enable them not just to consume but to produce. This is by designing and building a system for them and then managing it from site to plate all the way to composters. It creates a circular economy of nutrients. Whereby the green waste generated by the system like weeds or leaves goes to a nutrient bank».

The climate crisis mankind currently faces is fueled by traditional and conventional farming techniques. Scientists believe that the solution is to switch from meat to plant-based diets. This is in addition to reducing food waste and improving food management technologies. Gomes explains: «We should create new narratives so that we can change and give a face of local consumption and production. If you don’t see things growing and if you don’t engage with productive systems where people can actually associate and create small institutions then we won’t have enough attraction to lead other big revolutions. Our main aim is to ignite: to take the first step that will basically draw our trajectory and that is what essentially moves us».

Upfarming company has managed to create new job opportunities and investments. In Gomez’s words, it molds a more interactive community with a positive social health. «There are three places where you can create jobs. One being on the tower maintenance in the agricultural part working with professional agricultural technicians. This is a job that can also be done by anyone. Secondly, people that can distribute the product using cargo bikes and commuting through certain circuits within the city».

«Lastly, people that actually sell the produce. We have small entrepreneurs we work with. It can be the farmer or someone else that can sell these crops and create an added value. The local markets can then proliferate everywhere you can have small city farmers. Some invest in one certain type of crop while others with a variety of crops». Upfarming creates community engagement through teaching and education for all ages. From children to the elderly, creating an intangible revolution.

Upfarming and similar companies can reduce the miles that they travel in order to reach local markets and supermarkets. This triggers a chain reaction, reducing fuel consumption and total cost to consumers. Vertical farms can be set up in urbanized areas, so the fresh produce arrives faster and more efficiently. Lacey discloses: «We are comparing ourselves to a broken system. It is difficult to position ourselves in to say that we are a better solution than something else. In order to change things at the scale necessary, we need to have a huge impact on consumer behavior. To change the market and that has to happen hand-in-hand with policymakers, local governments and other business innovations. We are slowly building our resources and networks in Portugal and across Europe. This will allow us to participate and contribute to that kind of systemic change that we need».

The consequences of climate change

Agriculture remains one of the most liable industries when it comes to natural disasters. Climate change has caused recurrent extreme weather events that can damage an entire season’s worth of harvest. «In Palestine and the western Sahara, these occupied contested territories use hydroponic systems. They are in controlled environmental agriculture and used to grow huge amounts of fresh food for the population. They make themselves self-reliant rather than rely on foods from aid. But the biggest problem they face is the source of fertilizer for the crops to be fed from. So, they look at the livestock that goes in sheep in particular. Then, they create fertilizers out of those things in order to create sustainable communities».

The next generation of vertical farming

With the vertical farming industry progressively increasing, it is worth noting that everything has limitations. Working for crops in addition to startup technologies can be expensive. «We are currently working with technology from Singapore sky greens. They are six meter tall rotating vertical farm towers which are primarily for leafy greens. This is because of the nature of the infrastructure, small root and relatively low plant profile. From micro greens to the greens that are grown for salads, herbs and aromatics».

Gomez discusses the difficulties: «We have contacted one of the most experienced greenhouse builders here in Portugal. Even for them, it was a challenge. They have been operating for over forty years now and had never designed vertical green towers with these dimensions. Its complexity and not knowing how the wind would react to it from engineering. These range from public approvals to electricity and design of the whole system alongside the horticultural operation. A hard journey nonetheless but one where we have learnt from. The next project will hopefully take us one fourth or fifth of the time».

Perhaps it would be possible for vertical farming and traditional farming to complement and coincide together. Food production is an imperative issue to be addressed today. Vertical farming incorporates hydroponics, aquaponics and other growing methods. These should be examined as a tool to help alongside traditional farming whilst being space conscious. Gomez believes that design professionals can also aid in that merging with the European Bauhaus.

«Using existing and preexisting locations and buildings to fit rooftop greenhouses, vertical farming and vertical walls. There is no way you can actually approach the city in an aesthetically elegant way without going for professional design. This includes architecture and landscape. We are trained to design functional beautiful systems. If it is just functional, people will not approve of it or put one of these systems in their backyard. However smart, high tech and eco-friendly they may be».

Lacey concludes: «What we are doing is combining vertical farming with community gardening. Often it is more small scaled and friendly. By bringing them together, we are mashing them into something innovative. It raises awareness and provokes conversations on both sides».

Upfarming’s operations director and founder of Urban Growth in the UK, a standard community gardening organization in London. Existing to make the city greener and healthier working with worldwide brands Timberland and LindaMcCartney Foods. Aiming to improve the population’s wellbeing by connecting them with the city’s nature.

Has been working in Parto Atelier, a Lisbon based architectural studio founded in 2016. It has been Upfarming’s creative team, working on projects from horticulture to sustainability in the urban context.