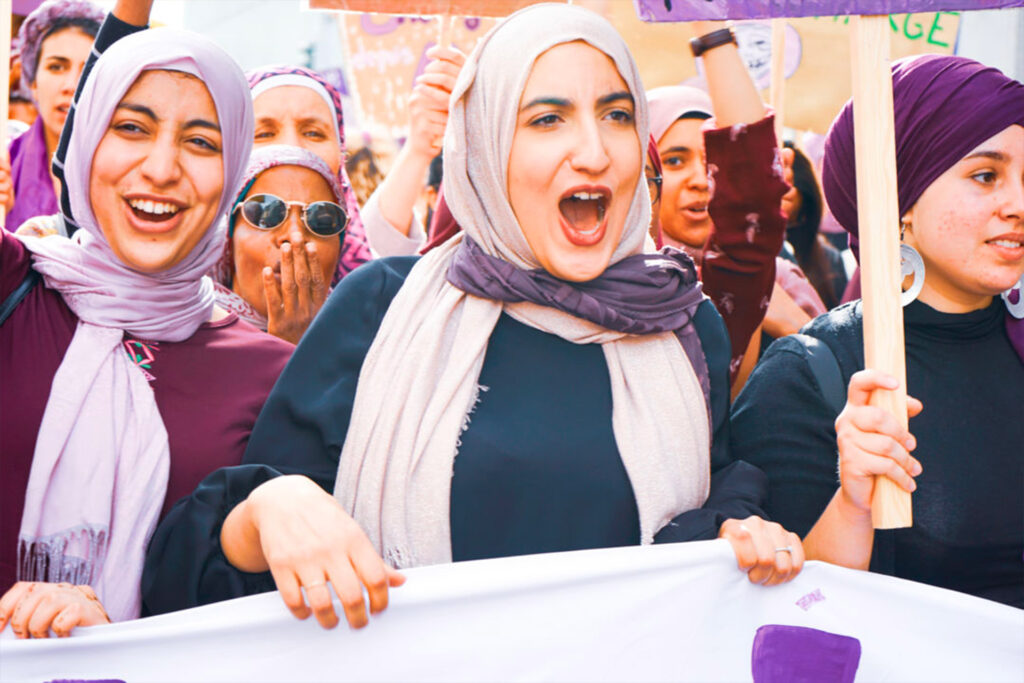 Monster derives from the Latin monstrare, to demonstrate. Dr. Michel’s methodology explores this notion of bringing forward shared realities of others and being transparent

New arenas of togetherness grow through active scholars who write, educate and circulate ideas. Within these arenas stands Dr. Noémi Michel. She is an activist, anti-racist and feminist scholar. A senior lecturer in political theory at the Department of Political Science of the University of Geneva.

Her research and teaching interests are in the areas of post-colonial and critical race theory, with a focus on diasporic Black feminist thought. Her current research explores on the one hand conflicting grammars of anti-racism in European public debates and institutions. Also on the other Black feminist theorization of political voice. Dr. Michel defines her practice as based on «intellectual, activist and cultural work that is anchored in Black studies. In particular in Black feminism».

She continues by explaining «Black feminism not only proposes one of the most outright – but underrated – critique of power, but also one of the most desirable horizon for relating to the notion of life. In that perspective, her work aims to foster and ‘transform ‘the conditions that constrain (intellectual, political, personal and embodied) life».

Gloria Wekker and the scavenger methodology

Dr. Michel’s academic approach involves using the notion of ‘scavenger methodology’ inspired by  the Black feminist Gloria Wekker. Herself had been inspired by the queer thinker, Jack Halberstamm (another active figure writer from this arenas of togetherness).

This methodology of the scavenger or queer methodology, according to the professor of Gender Studies at Columbia University works to bring together methods and approaches that are often framed as being at odds with each other, such as empirical data and auto-ethnography.

Dr. Michel states «I embrace being an alien in the scavenger methodology I use, because I do not think one can understand the current operations that renew our capitalist racist hetero-cissexist ableist structures by bypassing their renewal in the texture of the everyday». This demonstrative expose allows us to rethink our relationship to current hegemonies in a sort of Preciadian form.

‘Can the monster speak?’ asks Paul B. Preciado in his latest writings. He is one of the most influential philosophers of our crisis-as-usual world. Preciado’s work focuses on applied and theoretical topics relating to identity, gender, architecture and sexuality. He speaks as the ‘monster’ in front of a panel of psychoanalysts. Those who speak in his name make him into a monster.

This goes back to Preciado’s own understanding of being confined to the category of the ‘other’ after going ‘beyond a gender transition’. He attempts to emancipate himself from the ‘discursive relationship’ of domination. The monster becomes the site of articulation of these ideas.

At the same time, the terminology ‘monster’ derives from the Latin monstrare, to demonstrate. In the same way that monsters are demonstrative in a Preciadian sense, they also afford us transparency. Again in the etymological sense of going beyond the visible. Dr. Michel’s methodology explores this notion of bringing forward shared realities of others.

Noemi Michél explains being «at the service of making sense of particular lived experiences of oppression and resistance – including  my own experiences related to being a Black woman, born in Switzerland with two immigrant parents one from the Caribbean and the other from Eastern Europe.

With others, my work tries to build a narrative that makes sense of the past and future constraints and potentialities of those particular experiences. These narratives emerge at the crossroad of my academic, activist and artistic collaborations.

I try to deploy a methodology that is non-extractive. It seems like academia is extracting experiences in order to gain value on the market of knowledge production without accountability towards its objects of study. Can we study in order to care and love instead of extracting and stealing from?».

Dr. Michel’s students mentioned to her that the classes allowed them to feel «more free». Another mentioned that after thinking of the notion of voice within Black studies, they felt more «empowered to refuse or reclaim things when facing people with power».

The co-founder of the Swiss feminist collective les Foulards violets mentioned using Black feminist arguments from Dr. Michel’s course when crafting their political statement against a law criminalizing Muslim women. She adds: «another more abstract impact I have been told is that those who have been exposed to my work become somehow suspicious with the dominant narrative of Western modernity and progress. I always recall that the most radical ideas of freedom and equality from the Caribbean, the Haitian Revolution and not from continental Europe».

The feminist scholar clarifies the processes that shape these advancements on others «when people come back to me and tell me that something I wrote, said or taught them could resonate with their process of self-actualization and liberation, I feel honoured and happy. However, I try to never forget that this transformative power does not originate in ‘me’ but in the long and diasporic rich tradition of radical Black art, thought and movements».

Through a variety of mediating tools, I reinforce my voice constantly

When asked about the recurrent notion of having a voice, the scholar explicated. «We can’t ‘have’ a voice. I follow feminist, Black feminist and queer of color approaches that say that our voices is not a thing that we possess but is always mediated through different operations. Right now you are reading ‘my’ voice, but this voice has reached your ‘ears’ and ‘eyes’ through technologies of writing, editorial negotiation, Lampoon Magazine’s framing. Through a variety of mediating tools, I reinforce my voice constantly».

Dr. Michel is a member of the European Race Imagery Foundation (ERIF) which is ‘devoted to fight racist imagery and amplify visual resistance of Black people and People of color’. With this backdrop, Dr. Michel allows us the opportunity to perform a critical exercise of understanding the medium we work in, which in this case is the medium of print magazines based on text and imagery.

She references the Black British thinker Stuart Hall «for us to better understand how racism could not work without the power of the visual. Hall explains that race is a ‘grammar’– a master code – that transforms our bodies into texts. He adds that we way read signs from bodies in an automatic way, such as skin color, hair texture, the shape of  nose or ways of moving – and then we classify and hierarchize the bearers of those bodies as human, less human, non-human».

Dr. Michel continues by explaining that «The history of race and colonialism is the history of the constant maintenance and cultivation of a white gaze fed by the constant production of the spectacle of racial otherness. It is also the history of the manifold strategies and counter-aesthetics that racially subjugated people cultivated in order to counter, disrupt or escape the violent effects of the colonial-racist gaze».

She continues «this magazine, like any other producers of imagery, is inheriting this long history. There is no possibility to refuse that legacy. It would be a denial to claim that you are outside of the modern visual history of race. The political and ethical challenge then is to ask yourself: what past do you amplify through your aesthetic and visual choices? Do you renew and thus prolong a history that stabilized Black and Brown bodies as commodified objects of white consumption and profit or do you give space and material resources to visual cultures and aesthetics of liberation?».

The politics of voice

As an extension to imagery, Dr. Michel lately has been exploring the sonic and the vocal. Her current projects explore the way the body mediates our voices. The activist scholar clarifies this as the «politics of embodied voice, namely in the fact that the way one is embodied will have an impact on the way one can be listened to, responded to and cared for, in a way to center the constant erasure, and silencing of Black cis- and trans-women».

She adds «from that perspective, the issue is not how can I have a voice, the issue is way more structural, it is how to make my life, my humanity, my body and thus my voice matter?». One way Dr. Michel explains it is possible to do so is «to connect the long history of bodily exploitation and dispossession through slavery and colonialism to the current inabilities of our democratic societies to listen to and care for minoritized voices».

I am into sound

Conducting a pedagogic project ‘the politics of voice’, she teaches critical Black diasporic theory through podcasting. An online public radio station broadcasts students’ audio essays. In this way, she explains «the issue of voice is not only an object of study but also a collective experiment». The feminist scholar recently wrote about the acoustic dimension of racism. «The ways racism makes a noise, a white noise that hinders Black subjects to cultivate an inner voice and to speak and be listened to».

Dr. Michel, along with her sister Ka(ra)mi (a beat-maker/composer) and the curator Gianmaria Andreetta are currently editing a radiophonic series. This stages three hours of a collective conversation with the French Black feminist, Myriam Paris. The later has published a book about reproductive oppression and feminist resistance in la Réunion. Dr. Michel concludes, «I am into sound. Maybe it is a way to experiment around an alternative economy of attention that escapes the power of the visual».

Senior Lecturer in Political Theory since 2016. She was a visiting professor in Diversity politics at Humboldt-Universität zu Berlin and PostDoc at NCCR-on the move. Michel’s work brings critical and feminist political theories into dialogue with critical race; postcolonial; black feminist; queer of color studies.