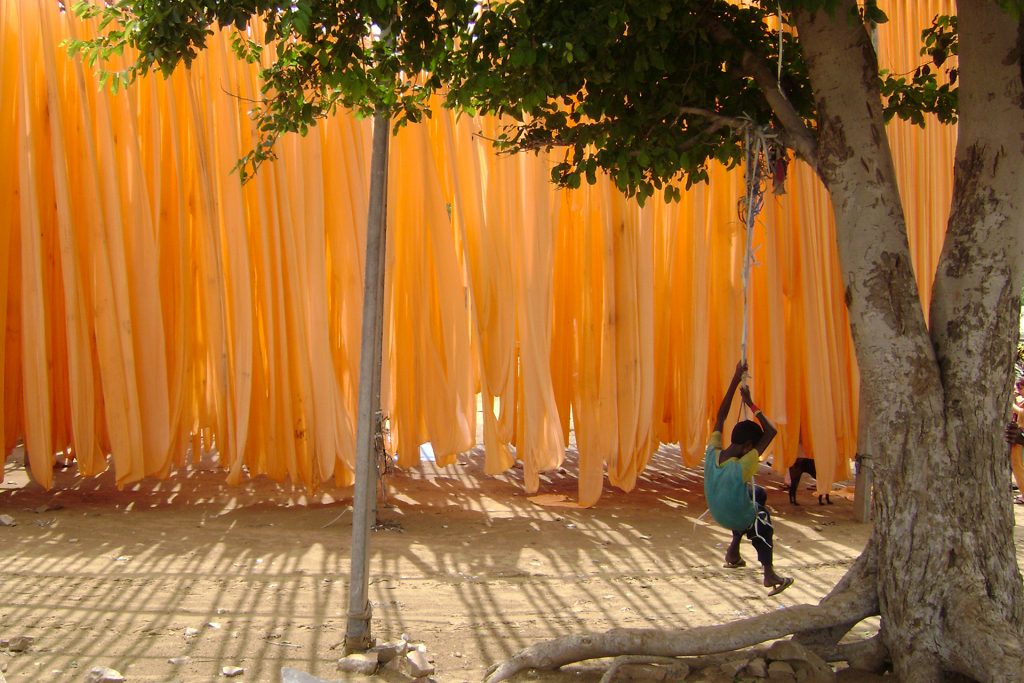 Colorifix – Tackling one of the textile industry’s most environmentally damaging processes: dyeing

CEO Orr Yarkoni explains how cells can be manipulated to dye fabric, cutting back on water wastage and chemical pollution globally. Water use is cut by 50 percent to 90 percent

Orr Yarkoni, 35, is a co-founder and CEO of bio-tech start-up Colorifix, based in Norwich, UK. It is tackling one of the textile industry’s most environmentally damaging processes; dyeing. The system, created alongside the company’s other founder and Chief Scientific Officer, Jim Ajioka, manipulates cells to deposit natural pigment onto fabric. In doing so, they claim to have solutions to today’s common practice, which is rife with pollutants, chemicals and inefficiencies.

Comparing Colorifix to standard dyeing, Yarkoni says water use is cut by 50 percent to 90 percent; depending on the material being dyed, energy use is reduced by nearly 40 percent, and it is fully non-toxic. «More than 1,900 chemicals are used in the production of clothing. Of which 165 the EU classifies as hazardous to health or the environment». Reported the 2019 European Parliamentary Research Service (EPRS). Excessive water use is the other problem. In 2017 the Ellen MacArthur Foundation found «20 percent of industrial water pollution globally is attributable to the dyeing and treatment of textiles».

The EPRS expands on this, writing «dyeing can require up to 150 liters of water per kilogram of fabric. In developing countries, where most of the production takes place, and where environmental legislation is not as strict as in the EU; the wastewater is often discharged unfiltered into waterways». It was the polluting of developing countries’ drinking water that Yarkoni and Ajioka came face-to-face with in 2013, on a research trip to Nepal.

«We went to Nepal as part of an arsenic bio-sensor project. We created cells that would change colour if the arsenic levels were too high and report to people if the water was safe to drink in an inexpensive way». Says Yarkoni, who studied molecular and synthetic biology to PhD level at Newcastle University, before working at Ajioka’s laboratory. While deciphering what product would best help those in Nepal, locals provided them with a list of sixty-five chemicals in their water. Digging deeper, they found over half were derived from the textile industry.

«That’s when we saw how big the issue is. We thought, well we are making material that changes color, wouldn’t it be nice if we could get them to change the color of other things. And instead of monitor how many chemicals are in the water, completely avoid their use» says Yarkoni. «That’s the driver for Jim and myself. To provide a solution to dyeing that doesn’t involve the chemicals, and reduces the inclusion of water». That year, the new dyeing process behind Colorifix began its development. «We started playing around with it and we kind of got it to work. And then we got it to work better», says Yarkoni.

In April 2015 they filed a patent, one year later it was accepted, and a month after that the company was launched. The process is relatively simple, and starts with finding a pigment for cells to produce. The system is limited to using only naturally occurring colours but, as Yarkoni says, «nature is generous with those». The pigment is then sequenced, providing a DNA message to direct the cells and make the colour. Yarkoni uses a parrot’s feather as an example. «We extract the information and DNA code. We can then see how you make that red, and the beauty of how this type of information works is that you don’t need to do it twice, we never need a second feather».

Needing just one sample is a big shift in regards to traditional methods of natural dyeing; which relies on collecting enough plant or animal material to colour a given fabric. The difference is shown in a new beige made at Colorifix. From a pigment found in a fruit fly’s eye. «There are lots of colours that exist but aren’t really accessible to us. If you wanted to make a t-shirt dyed with fruit fly eye colour naturally with what’s available today. You’d need to get billions of fruit flies, poke out all their eyes, do a solvent reduction for all the pigment and then you’ve dyed one t-shirt. It’s not feasible», says Yarkoni. With the DNA sequenced, the beige is now one of Colorifix’s 35 fully developed shades. «It also has a funky UV light interaction, so it glows».

The time it takes to produce a new colour varies widely. «Melanin, the colour in our skin and hair, you can make off a single gene that’s one moving part. That is something that we can knock out in five working days», says Yarkoni. Others are more difficult. «We came across a technical challenge with making one specific pink that has twenty-two moving parts. There it gets much more complicated because it works as a chain reaction of chemistry. It took us about five months». Generally, «the colors we are looking at involve between three and seven parts, so development time is around three months».

The colour then needs to be reproduced by the cells

For this, «there are only two steps. You pick them, and you grow them through fermentation, which is the same process they use to make beer. They are creating the pigments themselves, starting from sugar and nitrogen» says Yarkoni. «Then you mix it with our only additive, which is a bi-product of making bio-diesel, glycerol. We harvest all of the liquid, all of the cells, mix it, and then it goes into the dyeing machine». The application, where colour moves from cell to fabric, is the step which most reduces environmental impact compared to common practice.

«We realised that there’s two damaging areas, and one is far more important than the other. The actual dyes make up 5 percent of the chemical issue. The auxiliaries, the heat, pressure, everything else to complete the fabric makes up 95 percent of the environmental footprint», Yarkoni says. Rather than pump water and chemicals to make dye attached to fibers, Colorifix are making the cells do all the work. «The cells are pushing the pigment directly onto the fabric. These pigments tend to be hydrophobic, meaning it takes a lot of energy to push them onto water. But if you give them something that is more permeable they will immediately go to it».

Cutting back on carbon emissions

«As the cell comes in contact with the material and wants to push the pigment out, it finds the most energy efficient way of doing it. Which means it’s going to change the charge, solidity, and pH at the interaction with the surface. And that’s what we are exploiting», says Yarkoni. This occurs at thirty-seven degrees, and when the surface becomes receptive to the dye, the heat is ramped up to eighty degrees. «When we raise the temperature and [the cells] blow up, the remaining pigment goes onto the surface ready to be taken up». With the cells as carriers, the conditions in the dye bath do not need to be regulated; «that means you don’t need to add all this extra water, and that’s how we end up saving», Yarkoni says.

Dead cell debris is left, and removed by a post-wash with detergent

«There is less waste that is less harmful». Yarkoni counts dye houses involved with Colorifix in countries from Portugal to Bosnia to India. To roll the method out on a global scale, they are developing a semi-distributed model to try and cut back on carbon emissions through the transport this implicates. «The real power of using something biological is that it multiplies. So instead of us making fifty tonnes of dye liquor in Norwich and sending it across the world. We ship five millilitres over to those countries, where it is grown using locally sourced sugar and water», says Yarkoni. While this raises some issues over fermenting equipment, staff training and biological licenses. The fact the fashion industry produces 10 percent of global carbon emissions, as reported by the UN Environmental Programme in 2018, suggests these are matters that need to be problem solved.

Technology and bio-tech as solutions

Currently, Colorifix’s focus is getting production started at brands’ dye houses. And demand is high. Yarkoni says they have ten brands who are top supporters and drivers, one of which is Swedish fast-fashion retailer H&M, who started backing in 2017. Twenty others are involved, and over one hundred more have been turned away as the team of twenty-six are stretched. The first factory to have the method in motion is in Portugal, where «several hundred meters of fabric has been made already, and they’re lining up for a commercial launch in the coming months». [Yarkoni could not disclose all the brands collaborating due to privacy agreements]. For a small to medium company to set up with Colorifix in the future, though, Yarkoni estimates an initial investment of €120,000. After that «we are not charging them for the colors. We are taking royalties. So when they make money, we make money. And that way we are not asking them to take the risk».

Exploring new ways towards the future

Looking to the future, there is another amendment to the system Yarkoni is keen to explore. «After tests we have found we can do the whole process using salt water only. So we could eradicate fresh water sources for these activities». The 2017 Ellen MacArthur Foundation study states «textiles production (including cotton farming) uses almost 100 billion cubic meters of water annually. Representing 4% of global freshwater withdrawal».

Meaning this is a shift that could have benefits on a large scale. «Looking to fifty years from now, wouldn’t it be great to completely wipe the use of freshwater in this process?» Yarkoni says. The scale of these issues are vast, but lunges forward in technology. Bio-tech are providing new solutions to problems that have been, to a large extent, ignored. Not everything will work, or succeed the first time, but Yarkoni readily admits that – and is not phased. «We are still learning as well».

is biological dyeing firm based in Norwich, in the east of England. It produces dyes that are inspired by ‘nature’s blueprints’. But the technology doesn’t derive pigments straight from plants or animals, like traditional natural dyeing methods. Instead, it copies nature’s processes in a lab setting, by replicating the ‘DNA message’ that codes for color in an organism.