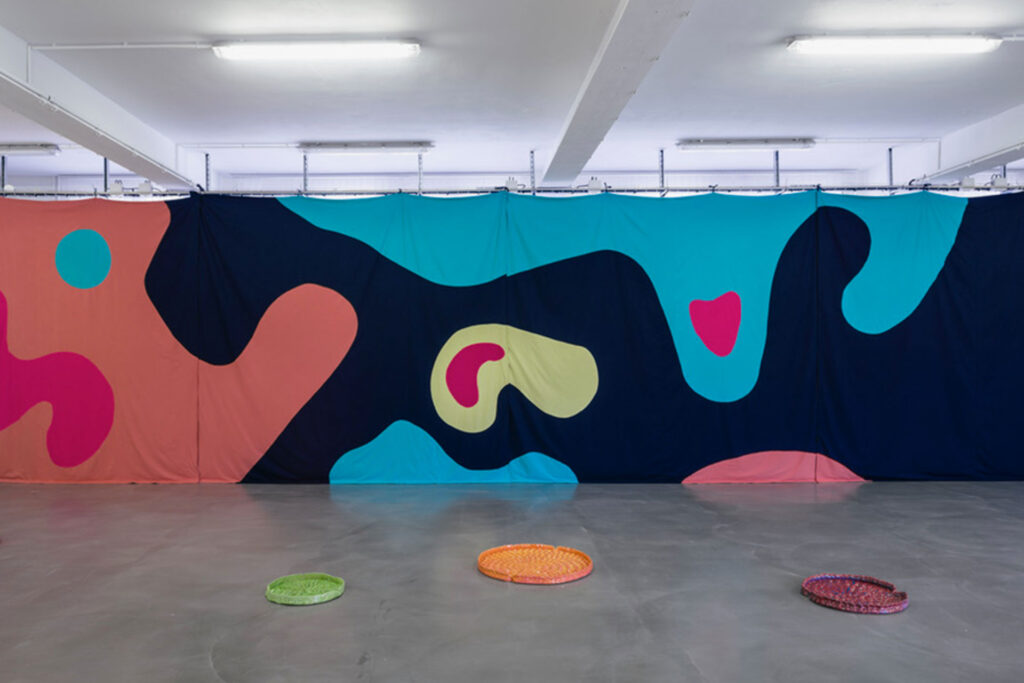 «I have been thinking about sculpture, statuary and the representations of the human figure in antiquity». Mai-Thu Perret’s exhibition at Istituto Svizzero in Rome

Defining ‘real estate’ opens up a discussion about properties, lands, buildings, and the rights associated with them. It may also touch upon producing, buying, and selling properties which include homes, townhouses, and condominiums. To assist the system of properties and lands, real estate agents double as a messenger to individuals, businesses, and investors in buying and selling properties, showing the grandeur and beauty of a space amidst reparation and demonstrating their ability to win over their clients through, at times, euphemism. Reading the title of the exhibition at Istituto Svizzero in Rome, the mind might pivot back to the definition above upon fixating on the term Real Estate. But soon, the realization dawns that it pinpoints a pun, a play on words that signal an exploration of land, the first solo exhibition in Italy by Mai-Thu Perret.

The characterization of sculptures, paintings, and performances

Before diving into the source of the exhibition’s title, Lampoon asked the Swiss artist about how the galleries where she has displayed her body of work describe her artistry. She is regarded by critics for her works that engage contemporary culture, art historical theory, and visceral materiality. While Perret approves the statement, she also notes the condensation of the phrasing.

«It is the medium that all this type of art writing works. It hints at the way that my work is often concerned with revisionist art historical scenarios. For example the video installations I made about figures like the constructivist artists Katarzyna Kobro and Varvara Stepanova, Space-Time Rhythm Modulation–The Most Difficult Love (2010) and An Evening of the Book (2007) respectively. The visceral materiality part is related to my involvement in tactile materials, practices associated with the craft that has a very direct relation to the body. To physicality, like ceramic for example. It is a material not only for sculpture but for dishes and toilets. And contemporary culture is always there because I cannot escape the times I am living in.

A good example is the series Les Guérillères (2016), a group of sculptures in hybrid materials – paper-mâché, ceramic, wicker or silicone and polyester casting – created in homage to the women fighting in all-female militia groups known as the Y.P.J. or Female Protection Units, a branch of the Kurdish People’s Protection Units which represented the first line of defense against ISIS in the region. This group of works was directly influenced by current events, as well as by Monique Wittig’s feminist masterpiece».

The artist’s video installation Space-Time Rhythm Modulation – The Most Difficult Love (2010) takes on the elements of film and sculpture being in sync as the artist projects three films in turns across a sculpture that bends echoing the letter J. She incorporates the references of history, literature, and autobiography, three themes that pervade her other works of art. For this piece, the story of Polish artist Katarzyna Kobro (1898-1951) graces upon the nuances of the work. An ode to an artist who persevered despite the difficulties imposed by politics and by her private life. Perret also relates her story to the novel We (1920) by the Russian writer Yevgeny Zamyatin. A science fiction book that pinpoints the creation of a spaceship to invade and conquer planets outside of the Earth.

A visit to Arizona and New Mexico

The work above ties in with the artist’s previous piece. «The very first artworks I exhibited were part of a story called The Crystal Frontier, a fiction about a group of women who had left modern city life for the seclusion of an autonomous, all-female commune in the desert of New Mexico, and it was very much meant as feminist counter-narrative», she tells Lampoon. Perret investigates the activism within communities and the utopia they envelop themselves with including their systems, beliefs, and designs. As a child, she had the desire to visit Olivier Mosset, a Swiss artist who lives in Tucson.

The artist describes taking a trip to Arcosanti from Switzerland and New York as an eye-opener in terms of the realities communities of utopia. As a form of income, the residents made bronze bells to craft and sell across the world in their metal studio helped by a volunteer guide.

In the studio, the bell came in many sizes, but had a single design, indicating continuity and tradition. The volunteer even implied, if not stated, that the studio houses the energy of creativity the craftspeople embody and pour into their work.

Perret’s friend then asked the volunteer if the community of the studio ever made anything else aside from bells. As long as the object is a bell, the volunteer said they can make anything. Perret describes the experience as a Zen koan taking a form.

Re-introducing herself and her works

For Lampoon, Perret gives an overview of a couple of pieces she worked on for the exhibit at Istituto Svizzero, ones that allow an introduction, if not re-introduction, of the artist to the viewers. «There will also be a sound piece created by my friend, the singer and poet Tamara Barnett-Herrin, which is based on extensive conversations we had about domestic space and non-compliant women, and more specifically, on the writings and the persona of French writer Marguerite Duras. The piece combines lullaby-like singing with a kind of call and response poetic monologue.

In the former dining room of the Istituto, a grand space with ornate marble columns that overlooks the Villa’s garden, I am showing a group of ten giant water lilies in ceramic, called The merging of all into one–this cannot be grasped (2020). Here, it is a question of bringing nature inside and freezing, very much like in Livia’s garden I mentioned above. In the show, there is a simultaneous concentration on domestic space and a kind of invasion of that space by the outside world, the natural world of plants and animals, the exact opposite of this closed universe of curtains and wallpapers».

Drawing the influences from Italy

Having her first show in Italy elicits contentment from the Swiss artist. Living in Switzerland signals her proximity to the country. She lets Lampoon in on her affinity towards the art, culture, and history of Italy. Even noting Italian influences in her work that vary from Lucio Fontana’s take on ceramics and materiality to figures of feminism such as Carla Lonzi and Rivolta Femminile. The Swiss artist also reveals her taste for the literature in Italy with authors Elena Ferrante and Nanni Balestrini. During the conception of her exhibition, Perret reflected on the evolution of her philosophy and work as an artist.

Minerva and the Museo Nazionale Romano in Rome

«I have been thinking about sculpture and statuary, representations of the human figure in sculpture for quite a long time, and of course, sculpture from antiquity plays quite a role in that. When I started working on the show, I spent time visiting museums in Rome, more specifically the Palazzo Massimo – Museo Nazionale Romano, which houses some extraordinary ancient artworks such as the Garden frescoes of the Villa Livia.

For the exhibition, I am producing a life-sized female figure in ceramic – about 150 centimeters high – that is based directly on a monumental statue of Minerva from the late first century BCE or early first century CE. Starting from a 3D scan of the statue I found online, I am creating a hybrid figure with a new face, that of a young Euro-African woman of the 21st century. The face is based on a real person, my sister-in-law. I also restored the statue’s arms and gave her extra-long nails in bronze. The sculpture is cast in ceramic using a 3D printed mold and will be glazed in color. The Minerva is accompanied by a group of birds in blown glass, also a reference to the Villa Livia fresco».

The past, the present, and the modernism in-between

Mai-Thu Perret has always been inspired by the past and modernism. Through her art style and works, she reintroduces their elements into the present, opening up to possibilities that society may have ignored the first time or that failed to be narrated. With Real Estate, she comes to the forefront as a messenger of these elements among the others. «Yes, I came up with the title», she says when asked about the source of the exhibition’s title. «It is borrowed from the third volume of Deborah Levy’s ‘living autobiography’ which is called Real Estate. I thought it was a good title for an exhibition in a patrician house like Villa Maraini, which is the heardquarter of Istituto Svizzero in Rome. The show is very much inspired by the building. The fact is that this is a former high bourgeois domestic architecture and not a conventional exhibition space.

I have done a lot of work on the wild figure of the witch, and in this show, I wanted to turn my gaze inwards, towards domestic spaces traditionally inhabited by women. My mind kept wandering about the lady of the house, whose biography is very thin. I loved how in the book Deborah Levy talks about goddesses and their companion animals. And about how she sees the old and frail women feeding pigeons in every city in the world as goddesses cut down by the patriarchy. This also goes some way to explain the birds accompanying the Minerva figure».

Istituto Svizzero acts as an interdisciplinary platform bringing together artistic and scientific research. From Rome, Milan, or Palermo, it facilitates connections both between Switzerland and Italy, as well as internationally. Istituto Svizzero offers residencies to emerging artists and researchers. In fact, the Institute presents each year a public program aimed at promoting forward-thinking events and projects. In addition to experimental practices, and excellence in research. Finally, Istituto Svizzero seeks to actively participate in the global discourse on arts and society. It do so envisioning new paths and looking beyond the boundaries of disciplines.