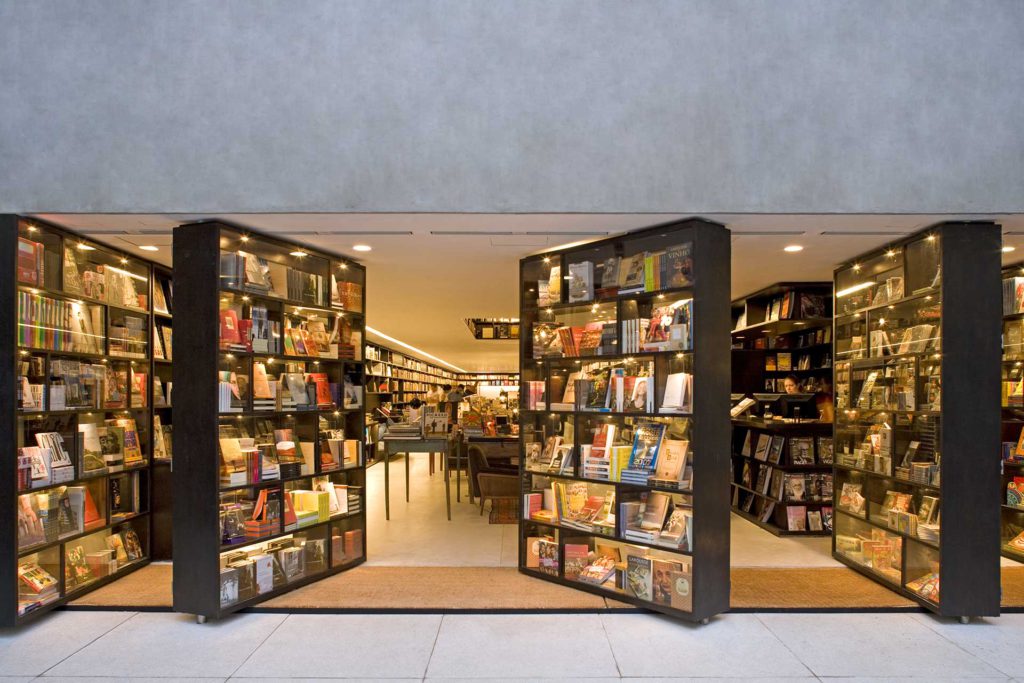 Samuel Seibel strolled the streets of Jardins, every day on foot, for weeks before he spotted the location which would become his future bookstore

In the district of Jardins in the metropolitan of São Paolo, the street of Lorena houses an atrium-style bookstore with doors that project themselves as blocks of bookshelves at night. Walking on the streets in the dark, one cannot miss the architectural building in gray tone, with a semblance of a night library. A treasure chest for readers, the Livraria da Vila in Lorena carries over fifty-thousand titles, spanning fiction, non-fiction, poetry and architecture, photography books, cookbooks, memoirs, art books, biographies as well as autobiographies. They also take pride in their children’s section which is curated with attention and detail, attributing a space for it in each of their outlets. Further, the bookstore houses a collection of music CDs, film DVDs, stationery, and toys, along with a cafe that serves finger-foods and beverages.

Thriving with art galleries and eateries, the neighborhood is a hub for the inhabitants of the city. The Jardins is home to museums such as the São Paulo Art Museum, the Brazilian Museum of Sculpture, and the Museum of the Brazilian House. Livraria da Vila is a thirty-three-year-old chain of bookstores emerging from Brazil. The couple Aldo Bocchini and Miriam Gouvea founded the flagship store of Livraria Da Vila after the military dictatorship in Brazil, in April 1985, in the district of Vila Madalena in São Paulo. In 2002, Samuel Seibel took over the reigns of the store.

Through his vision, he then transformed the brand over the years. From a single store in Vila Madalena, in São Paolo, he formed a network with twelve stores across cities in Brazil, in addition to e-commerce. Over the decades the bookstore has garnered the reputation of being a reference point in the Brazilian publishing market. Seibel’s childhood marked his interest in reading and collecting books. In his youth, in fact, his home was occupied with books. «We had a library at home brimming with titles».

His father, an immigrant from Poland, was an avid-reader of Jorge Amado and transmitted his acumen for reading to Seibel, starting with Monteiro Lobato. «My father arrived in Brazil during the war years in 1925 and learned the language in no time. He understood the importance of reading and was dedicated to educating himself and us», adds Seibel. There were no digital distractions, he recalls. «I was born in the sixties. We could either read or meet up with friends».

Brought up amidst the military dictatorship in Brazil, Seibel was paranoid of getting caught for keeping radical-titles at home. «In that period, people would hide book titles that appeared dangerous. They would get arrested for keeping progressive-titles». His professional journey took place in three phases. He started as a journalist and remained working in news media for a decade. His father then invited him to join their family’s furniture business. After a twenty-year stint with his father, Seibel decided to turn his passion for books into a business.

The decision came as an epiphany, one afternoon, when he was visiting a bookstore in Rio De Janeiro. «I remember walking into the store and realizing this is what I want to do with my life». He therefore began researching to bring his dream to fruition. «I made sure to visit bookstores in the cities I traveled». For this purpose, he rendezvoused with bookstore owners across Brazil. «I began meeting people in the publishing industry. Being an outsider, it was a challenge for them to explain the nuances to me, but they guided me the way they could».

He traveled to Italy, for six months with his wife, to clear his headspace and mull over his propositions. After browsing through bookstores across the globe, Seibel’s focus gravitated to Livraria, stimulated by an old-connection. «I used to buy my son’s school books from this shop». Upon his return, and after meeting with the ex-owners of Livraria da Vila a couple of times, he finalized the deal and became a bookseller in December 2002.

Seven years down the road, they launched the second unit of Livraria da Vila on Lorena street in the neighborhood of Jardins. «When I thought about opening our second store, I wanted it to be in this quarter». Seibel strolled the streets of Jardins, every day on foot, for weeks before he spotted the location which would become his future bookstore. Fourteen years later, Livraria da Vila operates out of this spot, on Lorena street. «Jardins in Portuguese means gardens. You will find people walking on the streets in this part. It is like Via Madalena in this aspect and that is what I wanted», says Seibel.

Spread across a seven-hundred-square-meter-space, the bookstore is dispersed over three floors. The basement holds the children’s section curated with books for adolescents and teenagers. Books filled with illustrations, colors, bedtime stories, and school textbooks. «We dedicate space and time to showcase children’s books. It is about creating the next generation of readers and literati», says Seibel. Back in the day, the bookstore also boasted of a miscellaneous-collection. «It has now become a minimized part of our offering». Further, there is a table present for book readings and seminars on the first floor.

An indigo-colored couch is placed in the corner as part of the reading section. It includes an in-house cafe. A spot to grab a drink or a snack while immersed in literature, before or after browsing the shelves. In addition, the ground level houses a glossary of books with topics from across the spectrum, «you can find fiction to coffee table books on this floor», he says. The bookstore is designed in an atrium-style. From the ground floor, in fact, you can see the books on the first floor through a portion of the ceiling that remains open.

For the interior design of the store, Seibel got on board architect Isay Weinfeld. It was his first experience designing the bookstore, and he came up with the idea of creating doors as bookshelves which open into the store. «Apart from the store at Lorena, he has designed six other outlets for us». Weinfeld is one of Brazil’s veteran contemporary-design architects. Born in São Paulo in 1952, he studied at the School of Architecture at the city’s Mackenzie University and launched his multidisciplinary practice in 1972.

In terms of book selection, Livraria da Vila priorities quality titles, together with Booker, Nobel, and Pulitzer Prize winners. «Bestsellers are the books that maintain the bookstores». The store strived to maintain an equilibrium, by facilitating shelf space for independent-writers and small-scale publishers. «We are moving towards ‘the long tail’ model». Seibel acknowledges the struggles that come with being an independent-writer. «When a writer is not known, it is a task to sell. We have them on our shelves, but there are times we have to make choices», adds the journalist turned entrepreneur.

Being a chain of bookstores, the curation process relies on inputs sent by the publishers, keeping in mind the quality as well as the profile of their customers. In Brazil, fifty titles are launched every day, giving rise to a market that remains flooded with options. «We have to keep refreshing and rotating the books at the store to stay up-to-date. We have a team of buyers and expect them to decide what to stock». A majority of their books are in Portuguese, with a section provided for imported releases.

There are no stakeholders in Livraria da Vila. Seibel runs the business with his two sons – Flávio and Rafael. The company employs over one-hundred-and-fifty people, fifty percent of which are women. «When we hire a person, we see the work ethics and not the gender or the color. The person must appreciate reading and talking to customers». As for sustainability, they have moved to recycled paper bags for delivery and handing over the books, to the customers, at the store. Brazil, a market that remains saturated with new-releases, the country ranks low in the number of its readers. «Brazil is not a country of readers. There is, in fact, a disparity between the rich and the poor. We, therefore, have to make reading available to the underprivileged and cultivate the reading habit in people and its youth», says Seibel.

Livraria da Vila units are part of the Leitura Alimenta. A project that accepts donations of used and second-hand books. These books along with a care-package are delivered to the homes of families in need, across the country.Before the pandemic, Livraria da Vila hosted presentations of lectures, courses, debates, pocket shows, and autograph sessions. Every weekend, in the evenings, Livraria da Vila, promoted children’s activities. Post the pandemic, the brand’s marketing efforts have shifted online, with Seibel hosting live-chats with over thirty-five authors, each chat focusing on a book launch. These chats take place on Livraria’s Instagram handle. «We are channeling our energy towards the online market», says Seibel.

As a result of the Covid-19 crisis, the retail store remained shut for four months, affecting the business operations, generating losses. «We are fortunate to have started our online store three months before the pandemic». Livraria da Vila launched two stores in 2020. They were both well-received by the public. While, for the future, the team is looking into opportunities presented by shopping malls to open outlets. «Next year we are planning to open three stores. We hope to be in a favorable position with the vaccine in Brazil», says the sixty-seven-year-old bookseller. Seibel’s preferred authors include Erico Veríssimo, Milton Hatoum, Machado de Assis and Rubem Fonseca. His current bedside book is the Biography of Churchill.