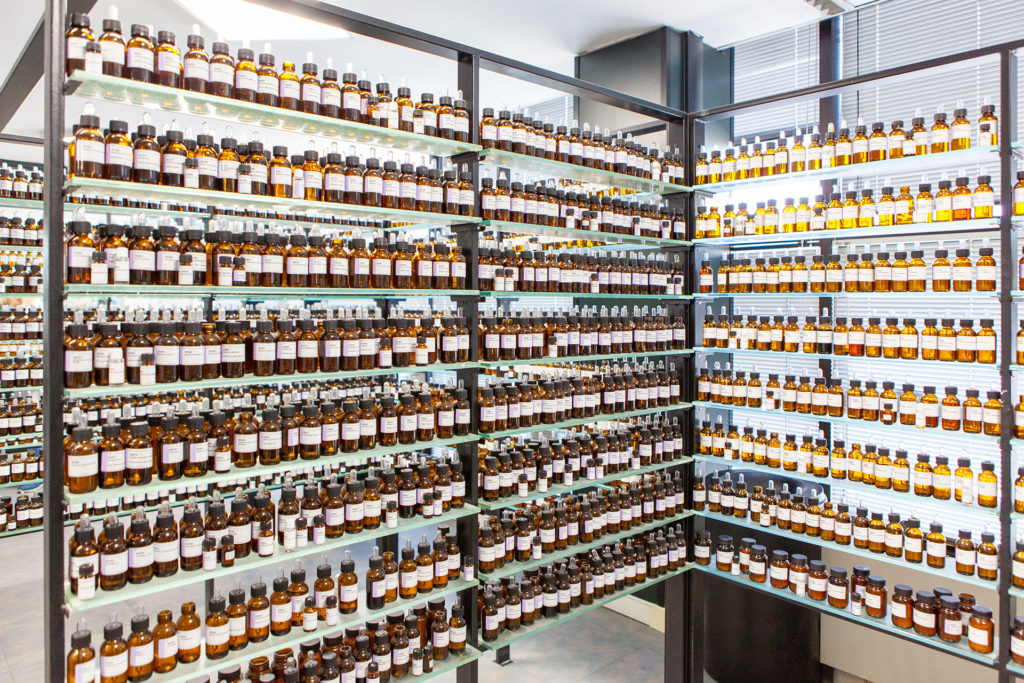 The overlay of six different shades of Musk, more about Musk complexity fragrance

The union of a single natural raw material such as musk together with wood, spices, fruits and flowers searches for three-dimensionality in the collection of fragrances

The centrality of a single raw material

To focus a fragrance on the centrality of a single raw material can be a challenge. From the perspective of a perfume brand. The possibility of falling into an already existing material and smell nuances is just as risky as being able to create a complexity of overlapping diverse characteristics of a material. The idea was born within the idea of the Musk Complexity fragrance within the Hologram Collection. This collection focuses on the research of new olfactory depths. Starting from a super imposition of a single raw material. The hologram philosophy wants to develop a single ingredient within three dimensions.

In this case, for the first fragrance of the collection, the material used is the musk. Chosen among others as a starting point by the company and Cindy Guillemant, founder of New Notes. «Musk is complex, seductive, unique», she says. The work on musk within the fragrance aims to be different from traditional and widespread scents. The facets of the material are rendered through a layered mix by putting together five different shades and types of musk and tying them together with wood, spices, fruits and flowers.

The research and recovery of the raw material involves the use of substances of synthetic origin. For the different musks, a crucial and debated aspect within the alcoholic perfumery industry. In particular within this fragrance, we find only one vegetable musk. Probably the only one that is possible to use in this form in the alcoholic perfumery sector, explains the perfumer. The moss used in this form is ambrette seed moss (Abelmoschus moschatus), also known as hibiscus or musk mallow. The seeds usually come from the Malvaceae plant which grows wild in India and cultivated in Egypt, Java, the Antilles and other tropical countries. In this case, the extraction come through carbon dioxide, which follows the subsequent steps. Carbon dioxide is liquefied at the temperature and pressure conditions required for the reaction.

This liquid substance then acts as a solvent to extract the odorous matter from the ambrette seeds, identified as SPPA30, explains Cristian Calabrò, the brand’s perfumer. This means that once brought back to normal conditions, the carbon dioxide evaporates, leaving no trace of its previous presence. In this way it is possible to obtain the most aromatic and scented part without any alteration or influence due to the type of substance used for extraction. «within this fragrance we use only one musk. The other four come from the creation of synthetic substances. However, they are researched derived and because of that, very expensive, they are created in a laboratory», Calabrò points out. The names of the other four musks used are Muscenone, Exaltone, Civettone, and Fixolide.

The constitution of the fragrance

Calabrò explains that one of the benefits of using musk as a raw material is that there is the possibility of creating five layers. In this way, during the evolution of the perfume, each musk works as part of the pyramid. Composed of head, heart and base, overlapping at certain times. «In my idea of layering, the characteristic is that each musk takes up a characteristic of the previous one. For example, a musk that works on the head is elegant and fruity. The musk that then works on the heart picks up a characteristic between these two, maybe it’s fruity and enveloping», Calabrò describes. This is the idea that helped and guided the construction of the fragrance; exploring new possibilities in the overlapping of smells and sensations. The composition allows for the creation of a complex structure. As indicated by the name of the fragrance, Musk Complexity, which moves away from the traditional use of musk in perfumes.

The Hologram structure of perfumes

«The interesting side of these musks is the possibility to use different tonalities. So, they all have their own characteristics, and the goal was to give an depth to this fragrance», highlights Guillemant. The perfume implies the use of other materials through a formula that contains natural derived scents and another one of synthetic scents. The mix is done among sixty raw materials, where approximately twenty are natural. Among these are different citrus and ginger scents, which is noticeable in the result.

«It seems interesting to be able to understand how this Hologram structure works. Layering the musks to bring out different shades and depths of this ingredient. The manufacturers have tried to turn a 2D image into a 3D one, as in a hologram», continues the founder. «An explosive beginning of Bergamot, Lemon, Petitgrain and Ginger; soaked in golden Rhum, blends with the intoxicating warmth of Cardamom and the sensuality of Jasmine, Labdanum and Chocolate Flower. Demerara Sugar and Sandalwood bring gluttonous and intriguing touches to a languid background of Vanilla, Patchouli and Guaiac Wood, which enhance the magnetic aspect of Musk. Wild and intimate at the same time», that is how the brand describes the constitution of the final fragrance.

Issues on the use of natural ingredients in fragrances

The use of the above-mentioned synthetic substances derives from the impossibility of finding certain elements in nature. What is usually classified as musky in perfumery is produced in the laboratory. «The natural mosses generally used are ambrette seed moss; oak moss and lean moss which now with new restrictions in place can no longer be used», Calabrò explains. Several restrictions have been made on the use of natural materials by institutional bodies. This is the reason why the alcoholic perfumery sector, for the past twenty years, has been based all over on the synthesis of substances.

The cause of most of the restrictions is due to the study of raw materials that have revealed the possibility of being irritating or otherwise harmful in some way to human health. For this reason, continues the perfumer, substances are first limited and then definitively eliminated from the market over the years. «there are stringent regulations on raw materials regarding health and safety». Calabrò affirms. Working within the limits of official legislation in the field of alcoholic perfumery also allows for greater stability on a market level. Guaranteeing that a brand’s products will appear in the market without any kind of difficulty. «It’s clear that I can create the most creative fragrance using raw materials. That in reality could be harmful, and then as soon as there is a problem, that product is withdrawn from the market», clarifies the perfumer.

Contrary to other market sectors who are constantly researching for natural ingredients; the perfumery sector chooses to go in another direction. As explained above, synthetic products can be better in terms of quality and performance than the natural product, if researched properly. Additionally, their processing and synthesis development often result in exorbitant costs. The use of synthetic substances can limit the creativity of perfumers because of the ban for the use of many natural substances. However, synthetic ones are able to have the same odorous facets of natural elements from which they take inspiration. The perfumer also points out, even relying solely on natural perfumery is limiting as it can become expensive; on average, the cost of natural materials is greater than the cost of synthetic ones.

Moreover, the use of natural materials cannot be compared to the variety of facets that chemistry can give. Using synthetic musks also helps to avoid animal derived elements. Some natural musks used can in fact come from animals such as white deer musk. The musk deer is a species living in the Hindus Kush and Himalayas. It releases a secretion contained in two areas under the abdomen, which they scatter in order to define the territory. Comparing the perfume product to a work of art, Guillemant points out how important the audience is for them. Also how experience a perfume in a proper way through its use on different skin types. The biggest challenge in producing this type of fragrance from a single raw material was having to overdose; and layer the same material, explains the founder.

An extrait de parfum brand that aims to break down role and gender boundaries in the industry. It aims to reach new olfactory directions through the encounter between selected natural raw materials and hi-tech molecules.