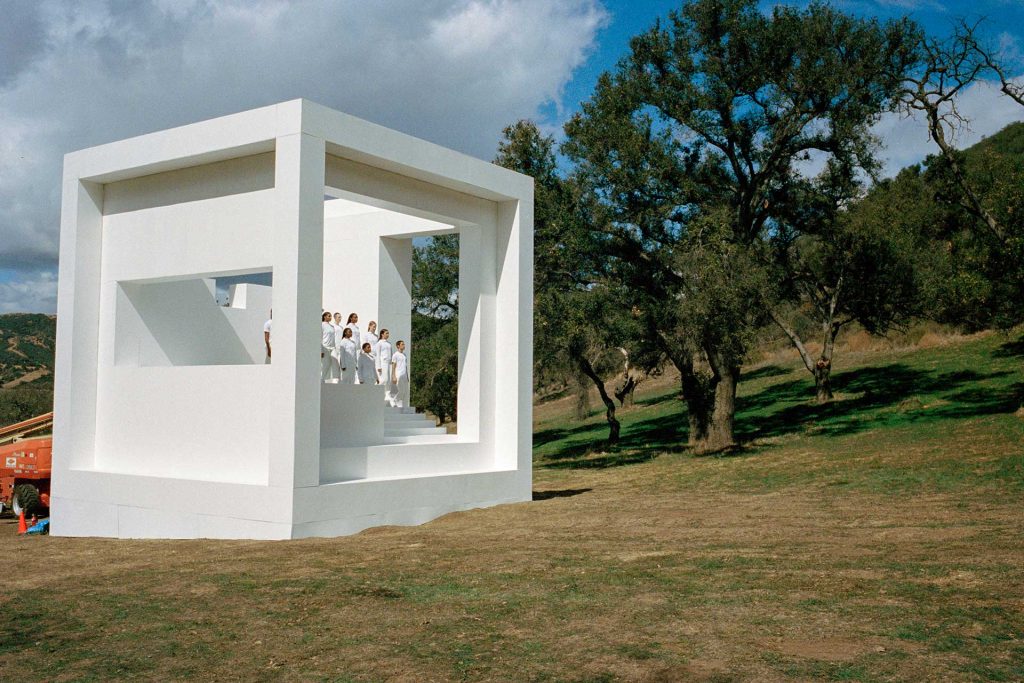 Born and raised in Los Angeles, Griffin Frazen had a cultural upbringing surrounded by narrative and performance. He initially studied art and film. Later, Frazen trained as an architect graduating with a Master’s in Architecture from Princeton University.

The course Griffin took at Princeton gave him access to other discourses. Griffin describes it as a small program that encouraged students to find the aspects of architecture that interested them and develop «rigorous architectural thinking». «I remained engaged in Art history, film studies and philosophy».

His studies culminated in a politically and socially engaged thesis under ‘Call to Action’. He tells how «in the end, I didn’t build or propose a final material structure». Instead, Griffin examined the protests in Egypt and Tahrir Square during the Arab Spring in 2011 and 2013. He identifies them as «architectural moments».

Griffin continues to advocate for the mobilization of architects. Their skill sets in human rights work in protest and event reconstruction through his collaborations with Situ Research. Situ is an organization based in New York where he now resides.

«Disillusioned with architecture as a trade» upon graduating, Griffin chose to work in a different medium and secured his first job at a motion graphics studio. Alongside this he also began working with his peers in the music industry and describes «slowly developing a freelance career, working with musicians and applying the skills that I had learnt from Architecture, motion graphics and animation».

Not beholden to one medium, Griffin puts it simply. «I have these certain skill sets and it’s just about finding the right people and projects to explore ideas».

The focus of Griffin’s work is on collaboration. He is concerned with Architecture and Body, and his work forms part of a broader performance or video work.

On working with new collaborators, Griffin explains it’s «a combination of luck and preparedness» and credits good timing for his collaborations with artists such as Solange with whom he has collaborated on two projects, Orion’s Rise, 2017, and Metatron’s Cube, 2018.

«Solange wanted to approach the stage design more like an Architecture project, which is to say not relying on stage materials which often lead to the same results. She was revolutionary in wanting to spend a lot of money, to do something that was going to stand out because of how its production».

For instance, Citing Orion’s Rise is an example of live performance design, Griffin explains how the deliberate design process began with sketches of design options. Options that referenced formal language, geometry and precedents by Étienne-Louis Boullée and Walter De Maria.

«I was approaching this more as an architect and someone that designs performances and events to translate it into something that could fully convey the music and support the musicians and choreography on the stage».

Working backwards from the first show, Griffin explains: «we knew that we wanted the first show to be a big deal so we focused on that and then looked at how those pieces could be transported and broken down».

Using welded steel frames, wood surfaces, and white painting, the pyramids were seamless objects, impossible to dismantle. «We didn’t want to see the seams so it was really about making these close to perfect objects».

In contrast, the stairs were modular to allow for changes in venue size and the orb was inflatable. «At certain venues, like at the Sydney Opera House, it could be suspended and at others it could be weighted and built into the stairs». Griffin provided detailed technical drawings that instructed the crew on how the stage should be assembled at each location.

«It made more sense to remake the pieces in certain cities than to transport them». Live performances and concerts have provided Griffin with the opportunity to work in a number of iconic venues including the Sydney Opera House designed by architect Jørn Utzon.

Griffin’s design for the Dior Guggenheim Gala, 2015, at the Guggenheim Museum designed by architect Frank Lloyd Wright was another such opportunity. He describes creating a dialogue with the building and how the rotunda «informed the circular nature of the stage, using the language of the spiral».

Of equal importance to Griffin in the design of live performance spaces is lighting design. «Similar to my resistance to how stages are designed, I also think they are often lit in a very similar way and so that’s something that I like to try and challenge».

Working closely with lighting designers to avoid the use of laser and strobe lighting, Griffin prefers theatrical lighting that accentuates the sculptural form of his works. The use of chromatic white is thus not a symbolic choice but a practical one. «It’s not about a color, it’s about light and shadow and so I think white lends itself well to that».

In contrast to designing for live performance, Griffin also designs for recorded performance. Although Metatron’s Cube uses a similar design language, «the first instance and premiere of it was always going to be a film». Thus the design process included storyboarding and dialogue with the Director of Photography.

With live performance «it’s more about the viewer deciding where they want to look». With film you are able to edit and use the language of cinema. «You’ll see this, then you’ll see that, and the meaning comes from the interaction between those two things».

With the global pandemic ensuring the cancellation of live performance events in 2020. Continuing into 2021, Griffin has relied on digital modeling and animation to stay creative. «I missed being able to go to performances and design for performances».

Comfortable working in 3D software, Griffin uses Rhinoceros to design works that will later become physical structures and Cinema4D to create visuals for animation projects, including his collaboration with Paul Banks on the music video for ‘Broken Tambourine’, 2020, a project they completed remotely and across continents during the pandemic.

Griffin talks about the distinction between Rhinoceros and Cinema 4D which lacks scale. «I think it speaks to what its intended purpose is. It’s much more about a visual or creating a world, not something that’s every going to have to be physical».

The collaboration between Griffin and Situ Research

With Griffin’s skills in 3D software, he has been able to continue his research on protests through data visualization. Introduced to Situ Research through a friend, Griffin began collaborating with them back in 2017.

In 2020 Griffin collaborated with Situ Research on two further projects. One with Amnesty International that focused on the use of tear gas against protesters. Another with the Human Rights Watch which analyzed police misconduct at the June 4th protest in the Bronx’s Mott Haven.

«The project itself was very immediate because the protests were only a couple of months before the project was released». For this work, Griffin relies on «footage from protesters, activists and human rights organizations» bringing him back full circle to his thesis which looked at the use of social media in protests and «the way that Twitter and Facebook were used to organize». He continues, «there was this contrast between the mainstream media and on the ground reports which we’re still seeing now». Hesitant to call it storytelling, Griffin describes the editing and clarifying of such videos as a form of unbiased «visual journalism» and continues «my skill is using architectural thinking and technical skills to help people understand these things from a more spatial perspective».

Titled ‘The Trap’, the project in collaboration with Situ Research and the Human Rights Watch resulted in an internal investigation into the New York Police Department’s response to the Black Lives Matter protests sparked by the death of George Floyd, which has since confirmed the findings of the video analysis that disproportionate force was used against protesters with Mayor de Blasio apologizing for the handling of the protest.

«The work with Situ is a clear way for me to apply my skills and my design to something impactful». In Bodybuilding: Architecture and Performance, Wilson and Bryony Roberts frame parades and protests as a form of ‘public’ performance. A prominent place in African American history and civil rights movements.

This view of protests as the temporary occupation of public space that makes visible the needs and rights of bodies relates Griffin’s work with Situ Research to his more artistic collaborations.

He explains that whether designing spaces for performance art or analyzing protests, he is «interested in how different types of spaces engage people, audiences and protesters and how they support different types of events and activities».

He continues, «you see how cities get weaponized against people to control and suppress them and you also see how protests make cities visible in new ways». For Griffin his design work is «about creating a space that will produce a certain event or performance. Hopefully to a positive end». ​​

Interdisciplinary designer. He works in the design of performance art spaces for artists. Among them: Solange, Grimes, Kelsey Lu, Yves Tumor and Jamie xx. Born and raised in Los Angeles, he attended New York University before receiving his Master’s Degree in Architectural Design. Griffin has taught architectural design at Princeton University and Pratt Institute. He now resides in New York where collaborates with SITU Research on human rights spatial analysis projects.