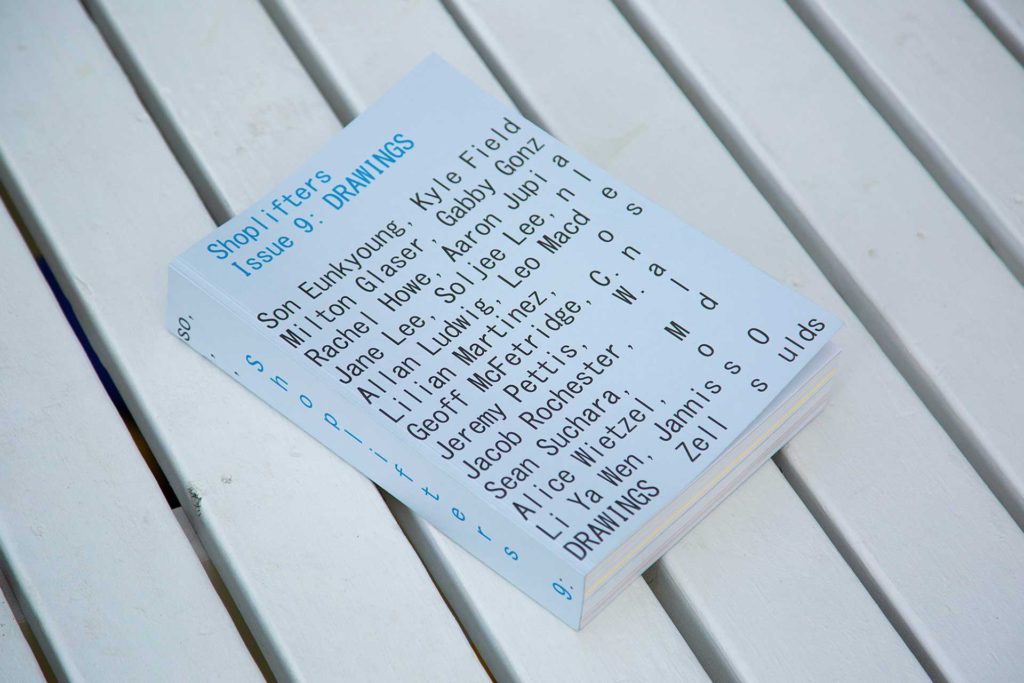 «We wanted to remedy the lack of graphic design and design books in Utah, which does not have an archive or library dedicated to the subject»

In 2014, JP Haynie founded the collaborative design practice and publisher Actual Source together with Davis Ngarupe in Provo, Utah. «Davis and I first met in 2004, when we were living in Provo. Our roommate, Bardhi Haliti, then introduced us to graphic design, which was something we did not know about. Davis decided to study the subject at Otis College of Art and Design in L.A. While I did at the University of Utah. When Davis came back to Provo after finishing his BFA, we started working together at a tech company. Our interest in book design was growing and, therefore, in 2014, we started producing books».

«Davies published Issue 1 of Shoplifters. A periodical featuring the work of artists, designers, graphic designers, photographers and musicians, which we continue publishing once a year. I designed and printed a book on my photographs. The black-and-white close ups I was shooting as an amateur photographer were my excuse for making a physical book», says Haynie. In 2015, while they were working at Rapt, an interior architecture firm in San Francisco, the duo joined forces to design a book on the work of their friend Natalie Neal, an American photographer living in Los Angeles.

«It was the first book Davies and I produced together. It cost four thousand dollars, which was a ton of money for us at the time. The book was not selling, until we did a show in Los Angeles at 1646. The opening night was not a success. But it gave us the energy and enthusiasm to continue working together. We named our design studio ‘Number 04’», Haynie continues. The artists took on the name ‘Actual Source’ after the collective received a commission from the Utah Museum of Contemporary Art.

Haynie and Ngarupe designed Actual Source, a show following a six-month research into what is involved in the making of a museum exhibition. They also compiled a one-thousand-page book documenting their work. Instead of displaying the book in the exhibition, they turned it into a multimedia installation. After taking stylized photographs, they produced artworks such as prints on pink paper and printed textiles that originated from a deconstruction of the book’s structure. Office supplies, such as packing tape, were included. «Actual Source was about the possibility of presenting a book through images. We wanted to show that books can live outside their physicality in other media», Haynie explains.

Following the exhibition, the duo opened a store that would include the titles they were consulting or buying online. «We wanted to remedy the lack of graphic design and design books in Utah, which does not have an archive or library dedicated to the subject. Actual Source therefore became a platform where people could come to consult and buy books that were a task to find in Provo and elsewhere in our State». The store was located at the front, with books displayed on wooded and white metal structures. While the office was at the back.

Sales were scarce, until participation in the NY Art Book Fair. Here Actual Source presented Issue 3 and 4 of Shoplifters. «The fair marked a turning point for us. Forty-thousand people from the book community, in fact, visited the fair. It was the first time we met our audience in person and were able to sell our publications. Since then, we have participated in book fairs, including LA Art Book Fair and Otis MFA GD Graphic Design Art Book Fair. Last November, we participated from afar to SPRINT Milano». As Actual Source’s publications increased, Haynie and Ngarupe moved production from the United States to Europe. The aim was to ensure quality and lower costs.

«Issue 6 of Shoplifters was the first book we produced outside the US, in Lithuania. It featured works by OK-RM, Laurenz Brunner, Girls Like Us, Mirko Borsche, Stefan Marx, Common Name, Wax Studios, Harry Gassel, and Jena Myung», Haynie explains.

Shoplifters Issue 7 was a Los Angeles special, which included interviews by critic Silas Munro with Kali Knikitas – Chair of the Communication Arts and Founding Chair of the MFA Graphic Design Program at Otis College of Art and Design – and graphic designer Tanya Rubbak. It also featured graphic design studios, designers, visual practices and art festivals such as Folder Studio, April Greiman, and Norma.

«Shoplifters do not have a single identity. The design, size, paper, typography, and tone vary from issue to issue. Issue 8, published at the beginning of 2019, has been one of our best sellers. It looks at contemporary typeface design by including one hundred new, in progress or unreleased typefaces by over sixty designers. It includes an introduction by Kris Sowersby, an interview with New York-based type designer Berton Hasebe, an excerpt of a research project on the Facit Corporation by Our Polite Society, and a section on type design tools by Dinamo. As the twenty-five thousand copies sold out, we published an expanded edition in fifteen-hundred copies, which sold out in turn. This issue’s commercial success laid in it being a useful tool for graphic designers», Haynie continues.

Further, they designed and published Issue 9 in 2020. It is a five-hundred-and-thirty-six-page, alphabetically organized, directory of artists who draw and their drawings. These are reproduced using fluorescent inks as a replacement from cyan, magenta and yellow, which give them the vibrance and saturation of the original works. The artists included – who differ for nationality, gender and background– are on the front and back covers, including Milton Glaser, Geoff McFetridge, Sungmin Choi, Sean Suchara and Alice Piaggio. Issue 10 is on the agenda. It will be a type design issue following in the footsteps of Issue 8.

In addition to self-publications, Actual Source also publishes the work of other artists. The three volumes of World Series saw the collaboration between Sam & Kaeli Wood (US) and Bomie Lee (KR), Alex Blouin (Canada) and Turkina Faso (Russia), and John Francis Peters (US) and Ilyes Griyeb (Morocco) respectively. Each member of each duo had to take fifteen photos of his/her surroundings, send it to the other member and try to match the composition and subject matter.

Designed and published in 2018, Crayonograph shows one-hundred-and-sixty works produced by Fraser Muggeridge studio over the last fifteen years, crayoned by designer and illustrator Abbie Freeman. «Fraser was a mentor for me and Davis. We were eager to do a project with him. The book investigates how an image translates through different graphic media, and wonders how many variations can be produced of a graphic form and how this changes our emotional understanding», Haynie underlines.

Actual Source’s commission by A24 and distribution

In 2019, Actual Source also received a commission from A24, the New-York based entertainment company, for designing three books dedicated to their movies Ex Machina, The Witch and Moonlight. «We took inspiration from the atmosphere of each film to inform the tone, materiality and design of the publications». Actual Source is preparing three of ten board books featuring artists Daniel Everett, Hassan Rahim and Geordie Wood, which will be published in collaboration with New Tendency. A German furniture company that collaborated with Actual Source on a set of bookends.

«The majority of books we offer are design and architecture-related, exhibition catalogues, monographs and reference books for students. Volumes such as ‘In Reserve: The Household! Historic Models and Contemporary Positions from the Bauhaus’ by Spector and ‘IBM: Graphic Design Guide From 1969 To 198’ by Editions Empire are included, as are exhibitions catalogues. These include ‘Lynette Yiadom-Boakye: Fly in League with the Night’ (Tate, London) and the Taschen revised edition of ‘Christo and Jeanne-Claude’. We include everything London-based Dent-De-Leone publishes. British collective Abake designs these publications».

Before the pandemic, Actual Source presented their books at pop-up shops, such as the one organized in 2017 at A/D/O in Brooklyn. It was their first retail shop after moving online, with items exhibited on PVC display structures. Haynie and Ngarupe presented apparel and accessories. «In our vision, books should live outside their physicality. We launched collaborations with artists and designers to create t-shirts, sweatshirts, accessories, stationary and home décor. Some of the items bear our logo. Others are designed following a publication’s release or event».

Actual Source is a collaborative design practice of Davis Ngarupe and JP Haynie.