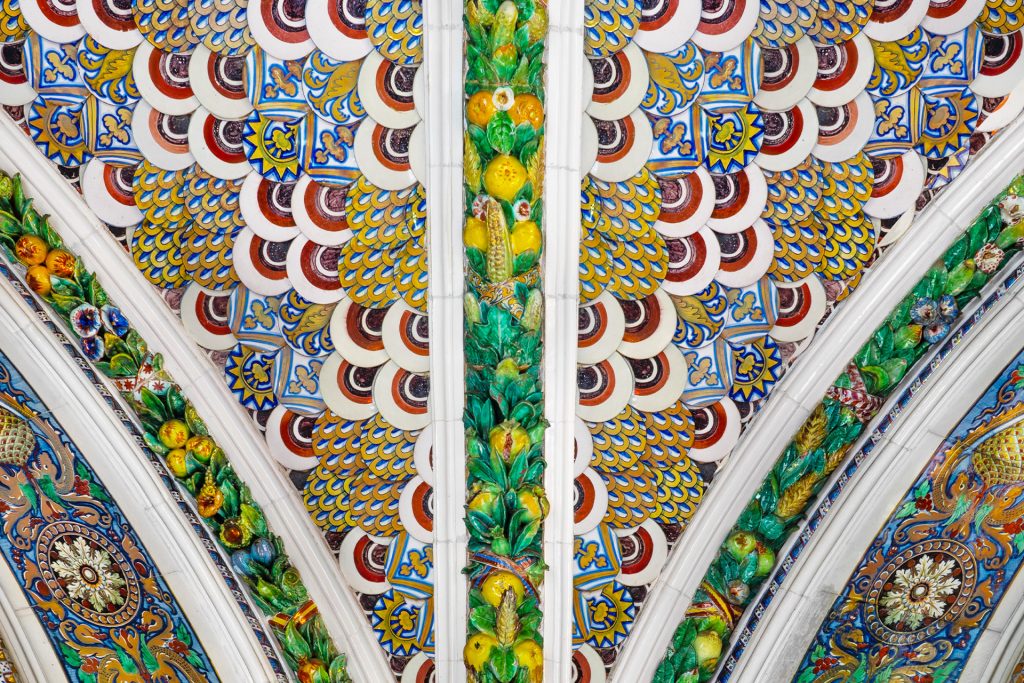 Stibbert, Florence. An inherited home that blurs the boundaries between romanticism and Japan

Frederick Stibbert was an illegitimate son and a millionaire who amassed a collection that was a forerunner of D’Annunzio. From Egypt to the Alhambra – Monica Becattini talks about his home-museum

The Stibbert Museum was founded by Anglo-Florentine collector Frederick Stibbert (1838-1906). Paraphrasing the name of an exhibition held at the museum in 2016, a once modest villa in the Montughi district of Florence, formerly owned by the Davanzati family, was transformed to become a Nineteenth century Wunderkammer. The Cavalcade of twelve antique, Italian and German suits of armor on display in the European Armory room was designed by architect Cesare Fortini in 1880 and decorated by Gaetano Bianchi: the cavalcade quenches the visitor’s thirst for exoticism, documented facts and curiosities. The collection continues with naturalia and mirabilia, souvenirs, costumes from several ethnic groups, furniture from periods in history, buttons, fans, tapestries, Middle Eastern, Ottoman and Balkan arms, and Samurai katanas and accessories. The love of Japonisme – a favorite with Count Premoli in the Rome of D’Annunzio – is clearly revealed in the largest collection of Japanese armor outside the Land of the Rising Sun. After the Suez Canal was opened in 1869, Stibbert travelled to Egypt to paint watercolors. At the same time, he acquired ornamental elements for his Egyptian temple in the English gardens of his residence, planted with trees and complete with a large pond. The decoration of the rooms has a feeling of the Orient and the Sala Moresca has an Islamic inspiration with its ceramic floor tiles made by Manifattura Cantagalli, a reference to the Alhambra in Granada. Queen Victoria made a private visit to the residence-museum in 1894, during her third and last sojourn in the Tuscan capital.

Frederick Stibbert studied at Harrow College, Cambridge, and was awarded a medal in 1866 for valor when he took part in Garibaldi’s campaign in the mountains in Trentino. According to Martina Becattini, curator of the furniture and paintings at the institution: «The Stibbert Museum, was founded in the Nineteenth century in a city traditionally associated with the Renaissance. Most of the items in the collections are from this period. A house-museum: a private residence on the one hand, someone’s home with the resulting stratification of choices and the metamorphosis of personal taste. On the other hand, it is a museum born out of romanticism, aiming to offer visitors a journey through time and space, one room after the next». Frederick Stibbert was a tall and handsome gentleman, the illegitimate son of Giulia Cafaggi, born into a Florentine family of modest means, and Thomas Stibbert, thirty-three years older than his common-law wife. His grandfather, Giles Stibbert, made his fortune as Commander-in-Chief of the British India Company’s Bengal Army. Frederick was the oldest of four children but his parents never married, oblivious to the scandal they caused.

The picture gallery has a collection of Sixteenth and Seventeenth century portraits and is called the Malachite Room because of the Demidoff Table and a neoclassical fireplace made in the same semi-precious stone and originally installed in the Florentine palace owned by the Demidoff princes of Russia – both were made by Henri Auguste. The matrix is enchanted eclecticism, going from an explosion of neo-Gothic decor to Renaissance revival. The Museum’s collection of paintings includes works by Neri di Bicci, Pietro Lorenzetti, Sandro Botticelli, Carlo Crivelli, Domenico Beccafumi, Luca Giordano and Alessandro Allori. Polychrome flags of the Palio of Siena hang from the ceilings, carved Fifteenth century coffers sit alongside Eighteenth-century rococo furniture. «I have changed how the collections are used and understood», continues Martina Becattini. «Under the supervision of Prof. Piacenti and subsequently Prof. Colle, we have attempted to restore the museum’s original layout as the result of recent museum studies. I was involved in studying the collections and completed a survey of the pieces and of the archives – using digital instruments».

The Stibbert Museum has organized exhibitions in collaboration with the Uffizi, the Bargello, and the Museum of Textiles in Prato. It has worked with institutions in the United States and Canada – the Chazen Museum of Art in Madison, the Frist Art Museum in Nashville, and the Ringling Museum in Sarasota – for several years. «We recently rekindled our relationship with the Academy of Fine Arts in Florence with the intention of reviving the Stibbert Prize, founded by Stibbert himself and aimed at young artists who have not been awarded for several years». Outside, the building is an imposing oblong divided into two connected wings, embellished by neo-medieval turrets and towers, and complete with pointed arches and sculpted coats of arms. Inside, its fifty-seven rooms are home to a heritage consisting of more than 50,000 pieces. Architects Giuseppe Poggi and Cesare Fortini, fresco artists Gaetano Bianchi and Annibale Gatti, and sculptor Augusto Passacaglia worked on the Stibbert building. Ms Becattini adds «Stibbert was a talented artist – he drew sketches and plans to help the workers and artisans understand his vision of transforming the villa into the museum he had in mind. Other examples of his creativity are the illustrations he painted for a book about the history of civil and military costume. The exhibition that opened last April was called Stibbert Artist and Collector». A spiral staircase takes you up to the Japanese Rooms on the top floor. The stucco work recreated the floor of a golden cave overlooking Roman ruins. This served no apparent purpose, it does illustrate the founder’s attention to detail. The survival of the museum depends on funding it receives from the city council, the events it organizes, and funding from Fondazione CR Firenze. «From being a young girl, my family gave me the opportunity to travel and appreciate art», says Ms Becattini. «When I was not travelling, I enjoyed the vibrant cultural scene that was around in Florence, my hometown, during the Seventies. Auteur cinema, experimental architecture, and radical utopias like Superstudio. At university in Bologna, I studied under professors Renato Barilli and Paolo Fabbri: phenomenology and semiotics introduced me to a way of conceiving art that is more visual and communicative. I wrote my degree thesis under Giovanni Peternolli, a Professor of Oriental History, who opened my eyes to Chinese and Japanese art and showed me a non-euro-centric view of the arts world». – «In 2008, Prof. Piacenti, the director of the Stibbert Museum at the time, introduced me to Ferruccio Ferragamo. He was looking for someone to organize an exhibition of his private art collection at Il Borro. I started by cataloguing and organizing the collection of wine-related engravings that Ferruccio had amassed since he bought the estate in 1993. Our first exhibition was called Wine and Art – Collections of engravings». Ms Becattini continues:«It was our interpretation of elements linked to drinking. This was followed by the acquisition of pieces, keeping an eye out at auctions and antiques markets, and as a result the collection has increased more than tenfold to almost six hundred pieces. The exhibition changes every year, it is always linked to wine and has become part of the winery tour – the initial encounter for those coming to visit the estate». It’s nice to think there is a sort of rhyming verse, a sort of assonance, linking the story of the Stibbert museum and the Borro estate.

Notes on il Borro. Il Borro was first founded in the Eleventh century: an area covered with rock outcrops, or should we say the crags of Tuscany, mere slivers of soil on the edge of a ravine, covered by trees. The word Borro means the bed of an ancient stream with steep, rocky banks – the word became the name of the family who owned the surrounding lands. The Borro family died out towards the end of the Eighteenth century and the Grand Duchy took over the property. In the Nineteenth century it was acquired by the Hohenlohe family before it entered the hands of the Duchy of Savoy in 1904. “When Ferruccio Ferragamo bought the estate and its 700 hectares of land south of Florence in 1993, it still bore the mark of the Second World War. He intended to restore the vineyards, olive groves, fields and hills to their former glory after acquiring them from the Duke of Aosta, whose wife Claudia d’Orleans, still lives locally. Salvatore Ferragamo, Ferruccio’s son who was named after the founder of the footwear manufacturer, has taken over the management of the estate. The estate’s farm has been run according to eco-sustainable methods since 2015: 45 hectares planted with vines and 40 hectares with olives – as well as fields with forage and kitchen crops. It keeps bees and has 30 hives, along with 200 free range hens. Vittoria Ferragamo, the youngest of his daughters, is in charge of the farm. Grand Duke Cosimo III reorganized the production of wine in Tuscany at the beginning of the Eighteenth century: he divided the Chianti countryside up into four areas – central Chianti, Carmignano, Pomio and the Upper Val d’Arno. The latter is where il Borro is located and its wine was recognized as DOC in 2011. The winery was built in 2000, complete with an underground corridor linking it to the old, medieval cellars. The barrique is housed among barrel-shaped walls. One of its wines, Petruna, is vinified in a terracotta amphora for a year. The bottle dedicated to Alessandro dal Borro, a military leader fighting the Turks in the first half of the Seventeenth century, has an elaborate label on its prominent belly. Ferruccio Ferragamo’s Borro has preserved the art collection of its owner, on display in spaces close to the Bacco winery and to Venere, referring once again to the association linking wine and the female figure. Engravings and works by Tiepolo and Chagall, Manet, Picasso, Warhol, Canaletto, and Tissot.