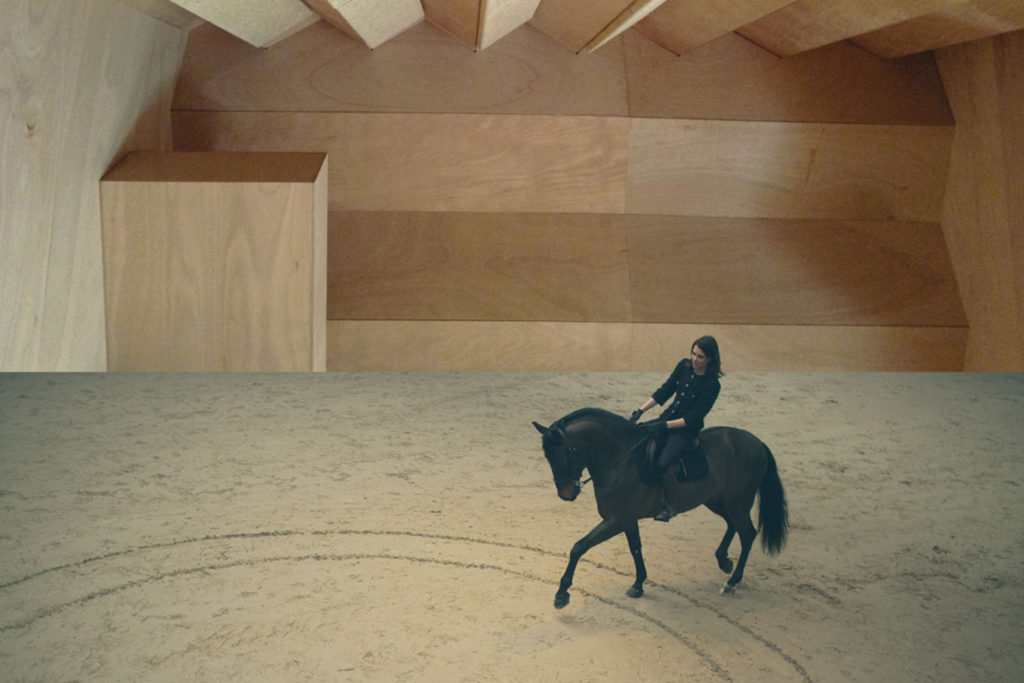 Opened by Charlotte Casiraghi on horseback, Chanel’s haute couture shows Virginie Viard’s own signature while paying homage to the history of the house and the 1920s scene

Experiencing Karl Lagerfeld’s vision up close for years before she took the helm of Chanel in 2019 gave Viard a clear direction and understanding of the house’s DNA. Viard brings Lagerfeld’s passion for the art and design scene of the 1920s into the Spring Summer Haute Couture Collection. Set designer Xavier Veilhan incorporated Lagerfeld’s references to constructivism into the production.

Viard revealed her affinity for the 1920s during a collection preview, where she talked about her inspirations for the collection. The feather and fringe details prominent in the era gathered her focus on the feminine side of the decade’s fashion. She incorporated this femininity going hand in hand with the freshness driven by the seasonal nature of the Spring-Summer collection. Organza and chiffon dresses, feathery skirts, and metallic shine complemented the muted color palette.

The subdued draping and frills created a sense of movement while still maintaining the smooth and airy silhouettes. Viard also reimagined a staple of Chanel Spring-Summer collections, the tweed suit, to feature a deep slit down the middle of the skirts, revealing a lace dress underneath, and deep slits also down the sides of the pant legs.

Despite the presence of Lagerfeld’s legacy, the Chanel Spring Summer Haute Couture collection highlighted Viard’s laidback take, coming from the point of view of a woman in charge of a luxury brand, with a deeper understanding of what wearability means for women. The show opened with with Monaco’s princess and house ambassador Charlotte Casiraghi, riding on horseback in wearable and sporty elements.

Riding in on a Spanish bay horse, she was wearing a black tweed jacket. The dramatic entrance wanted to underline his adoration of classic Chanel and its sporty side. The collection short film directed by Veilhan also focuses on Casiraghi on horseback. This pointing towards a feeling of harmony represented in the film as that between the horse and the rider.

An homage to Chanel’s equestrian roots

The opening on horseback is a move that pays homage to Gabrielle Chanel and her equestrian roots and inspirations. First introduced to horseback riding by Étienne Balsan – a French socialite and heir of wealthy industrialists – Chanel had the opportunity to approach equestrian clothing and gear in her way and to appropriate comfortable and functional pieces that had previously carried a masculine connotation. She became the well known figure she is today due to her inspiration from equestrian fashion. One that revolutionized women’s fashion and opened a whole new world of silhouettes for women to choose from.

Quilted fabrics, most notably the Matelassé, are one of the most tell-tale signs of inspiration throughout the house’s design history. This isn’t the first time the fashion house pays tribute to equestrianism. As the Boy campaign in 2013 was a pivotal moment for the return to equestrian roots, shot by Lagerfeld himself. Chanel’s Fine Jewelry also played its part in embracing this history. Especially in the 2015 collection, which featured rings and bracelets engraved to have a quilted motif.

The Grand Palais Éphémère gets an intimate makeover for the show

The collection’s feminine silhouettes and delicate embroideries contrasted with geometric structures in the set design. Despite the constructivist nature, the set design was yet another gentle departure from Lagerfeld’s Chanel. It substituted Lagerfeld’s preference for grandiose decorations in place of a more delicate and intimate setting.

Viard reached out to Xavier Veilhan for the commission, who had worked with the house fifteen years ago. Together they created an installation in Place Vendome for Chanel Fine Jewelry. Veildhan’s work comprises multiple mediums such as photography, sculpture, film, painting, and installation art. He also represented France in the 2017 Venice Biennale. He created an installation art depicting the technicalities of a recording studio. Xavier Veilhan transformed the space into a device that many musicians interacted with throughout the event. Viard’s commission led to a substantial curiosity on Veilhan’s part, as he explains her request to be vague over two seasons.

Bruno Pavlovsky, president of Chanel SAS, confirmed that Veilhan would continue to work with the house. In addition to his harmonious work with Viard and his influence on her inspirations. This decision aims to further propel Viard in the role of a creative director who is also a respected public figure by enhancing the digital storytelling surrounding her collection.

The final product, which turned the glass-fronted Grand Palais Éphémère in Paris into a 1920s World Fairs-inspired set, was both functional and aesthetically in line with Viard’s vision for the collection. Building a visual universe supported by geometric and industrial decorations and a mellow color palette complimented and contrasted with the flowing silhouettes.

A natural floor covering allowed the horse to walk easily. The rest of the decorations also created an aura of simplicity and modesty by using recyclable materials like natural plywood. The elements were brought together with soft lighting, creating an atmosphere that is dreamy and highlights the pieces’ delicacy. The show’s soundtrack was prepared by the songwriter Sébastien Tellier, who had previously worked with Viard and the Chanel house. The looks were photographed by the photographer Ola Rindal.

Virginie Viard and her mark on the House of Chanel

The Spring Summer 2022 Haute Couture Collection and its delivery and underlying storytelling manifest Viard’s quiet signature. Widely regarded as doing her best work in couture collections, Viard shows that she is on the way to asserting her version of Chanel without disregarding the house’s rich history. Karl Lagerfeld, taking charge of the house in 1983, had shown that the house could flourish without the physical presence of its founder and left his mark on not only the house but on the entire fashion industry. Having worked right beside him for years, Viard’s capabilities go beyond the realm of what she has seen from Lagerfeld and dive into a reimagining of the house through a once again female lens.

Even before being appointed as creative director, Viard was credited for keeping the romanticism at Chanel’s heart, bringing a sense of fluidity and purity. She mixed in elements of nonchalance with extreme attention to detail and meticulous craftsmanship.

Viard stays away from personal social media. She prefers to remain creative behind the scenes despite her current position forcing her to step on the runway. Utilizing this characteristic allows her creative voice to shine through her work rather than speaking or acting in public. It is in keeping with Chanel’s history that her taste for rock-chic resonates; the lightness she brings contributes to a harmony that will one day become a legacy for the House of Chanel.

Virginie Viard’s vision of feminine and bright Chanel is unveiled in a graphic setting created by the artist Xavier Veilhan. Many are the inspirations drawn from the playful elegance of the 1920s.