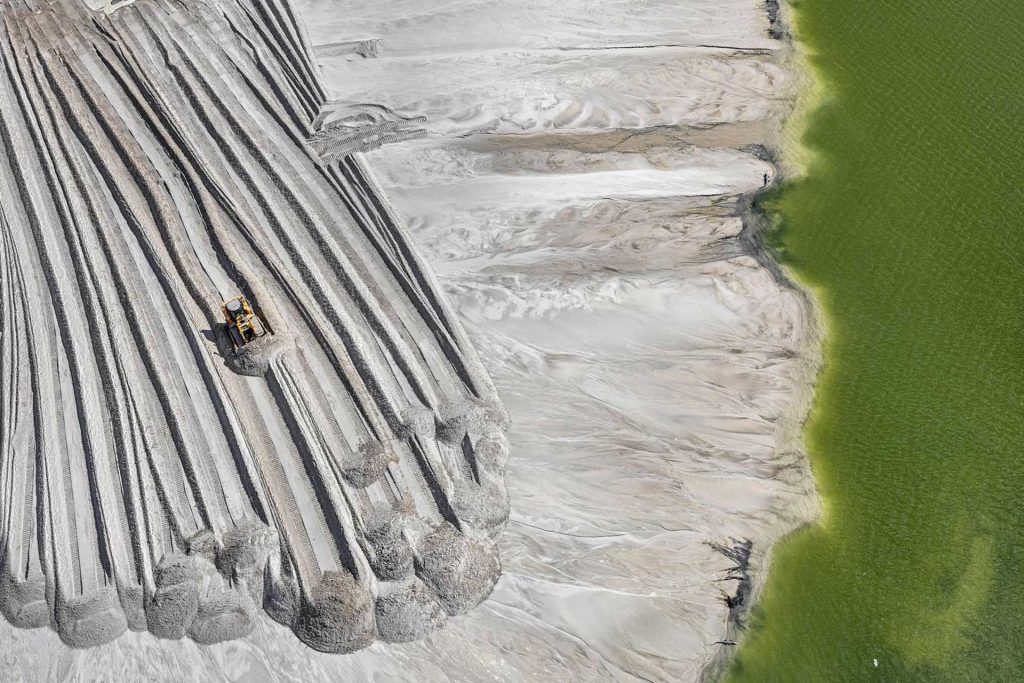 We enter an era of irreversible human impact – Anthropocene: The Human Epoch

An act of hope: filmmakers discuss Anthropocene: The Human Epoch and reveal how determining human impact isn’t always about statistics

A film set to capture and contextualize human influence, Anthropocene: The Human Epoch. A visual storytelling on a massive scale. Anthropocene is the third in a series of documentary films depicting the state of our world. This trilogy from collaborators Jennifer Baichwal, Nicholas de Pencier, and Edward Burtynsky explores the planet’s human signature. The teams first two projects Manufactured Landscapes and Watermark center around human planetary impact.

Baichwal pitched the idea of exploring the Anthropocene in 2015 to photographer and collaborator Burtynsky – she said: «no one knows what that word means». She points out this term is more in the vernacular than it was when she initially proposed the project. As the film opens, narrator Alicia Vikander tells audiences a group of scientists are investigating if we have reached the end of the Holocene epoch after 12,000 years. The group of scientists working to prove that humans have entered a human-shaped epoch is called the ‘Anthropocene Working Group’.

Director Jennifer Baichwal says this film is an attempt to translate the research of those scientists. Translation of this epoch would mean a four-year undertaking on the part of the filmmakers. It’s an ongoing story of the geological era centering human activity as the dominant climate and environmental action. According to Baichwal translating the work of these scientists meant understanding their perspective saying «Humans move more sediment than any of the rivers on Earth combined – those kinds of scientists are looking at that from a completely value-free perspective».

The Anthropocene is a «loaded term», says Baichwal. She spoke about the critiques these scientists face when presenting a new geological era. These critiques aren’t just from outside the scientific community. Some of the most heated debates come from within the geological scientific community. Not everyone is in agreement about where we stand in geological epochs. Some say centering this epoch around all human activity is an oversimplification.

A few have proposed calling the epoch the ‘capitalocene’ angling that the profit-driven destruction of the Earth is more impactful than most every day human activity. These critics also say humans should not be lumped together because we do not all make the same impact on the changing environment. It’s not hard to imagine why Baichwal and de Pencier felt drawn to turning these churning debates into a visual story. Originally conceived as a photographic essay, this film evolved from the origins of pure visualization. One that could convey information with sparse exposition leaving the current global environment one you had to see to believe.

The Human Epoch as a translation of the geologist’s work

«Some people in the scientific community didn’t embrace the whole going after the idea of the Anthropocene and then some thought this is our time to step up. The world is burning and the evidence is in», says director and cinematographer Nicholas de Pencier. While this film is a translation of the geologist’s work it doesn’t feature the scientists on screen. The film uses techniques to engage audiences with their own personal understanding of the environment.

As photographers and filmmakers, Baichwal and de Pencier saw the subject of the human epoch more interesting in terms of visualization. Multimedia in its concept, Anthropocene is created to immerse audiences. Though the film’s often omniscient point of view from aerial drone shots have been critiqued, Baichwal says it’s a helpful perspective to understand the scale of impact. «As filmmakers the only way we can make sense of anything is through a constant dialectic of the bigger picture and detail», says Jennifer Baichwal.

It’s hard not to notice the striking visuals of the film. As far as the visual scope of the film goes, Nicholas de Pencier wanted to create a sensual, sensory experience for an audience. He hoped that the scale of the film would raise the consciousness of the viewer. To lose oneself in the images of the film be they burning piles of illegal ivory or massive slabs of marble in Italy, the goal is audience immersion. Immersion can evoke empathy, and empathy can evoke change.

A documentary not prescriptive to the environmental issues

This film is a labor of hope according to directors Baichwal and de Pencier but deliberately not prescriptive to the environmental issues we are currently facing. «In this film we want to project points of hope and despair. Films about the environment are often tales of morality, showing us the aftermath of environmental disaster. Anthropocene is more action than reaction. It is up to the viewer to decide whether this film is about the environment or about the function of humanity itself. It’s quiet, self-reflexive narration allows for lingering thought. The sparing script isn’t for a lack of something to say».

A quick glance at the credits reveals this film was shot without using a traditional script. When Baichwal spoke about the film’s script she was clear about how the team was able to relinquish control when shooting this film. With money invested and the desire to make something worthwhile, being present with the scenes and the subjects of the film isn’t always a film crew’s priority. Baichwal highlights the value of staying in the moment. Nestled among the often-unrecognizable landscapes of human creations are the humans themselves.

Sunbathers bask by the polluted water in Norilsk, Russia with giant factory stacks emitting plumes of smoke behind them. While the overarching voice of the film is sparing and omniscient the voices of human subjects are warm and comical. When interviewing three factory workers at one of the metal smelting plants of Norilsk they speak about how they are impacted by living in the most heavily polluted city in Russia. A crane operator, her arms folded behind a mug, says «you find beauty in a flower…a flower bursting through the stone». The resiliency of humans comes across in these moments. The juxtaposition of human resilience and human impact is a tough line to walk ethically for any project.

Anthropocene, a film about conservation

Baichwal and de Pencier echo similar sentiments in their empathetic approach to filmmaking. In an attempt to counteract the power imbalance, they say they prioritize ethics on their projects. With an acknowledgment of their privilege and grasping for genuine interactions, the filmmakers hope they can avoid exploitation of people in the film. As a film about conservation, it is crucial to offset carbon emissions of production and post-production.

Even with this action Baichwal still questions if it is enough to justify making the film itself. Gathering material from 43 countries the team started assembling the film using over 202 hours of footage. Editing this film was a year-long. De Pencier says that the team thought Anthropocene would track a neat, tidy story about scientists proving we currently live in the human epoch. They learned that defining a permanent human impact on our planet was not a story that could be wrapped up in a bow but rather required an ongoing conversation. De Pencier says the scientists are progressing in their arguments in proving we have entered the human epoch.

Baichwal mentions Elizabeth Kolbert’s book The Sixth Extinction and her noted consequences if geologists do find that we are living in the Anthropocene. Kolbert says if the ‘Anthropocene Working Group’ has their proposal ratified then «every geology textbook in the world will become obsolete». Baichwal feels awe-struck by that possibility of giving detrimental human impact that breadth of acknowledgment. When considering what it means to be in the Anthropocene is a question asked by the film. Instead of hypothesizing a future this film asks a viewer to engage with the current analyzing how we interact with the environment whatever the categorization may be.

Together with Nicholas de Pencier, they currently live in Toronto, Canada producing and directing films through their company Mercury Films. The longtime collaborators met 26 years ago and married in 1998. Baichwal is a documentary Director and Producer and has won multiple awards nationally and internationally for her work.

Director, Producer, and Director of Photography who serves on the board of directors for several documentary film festivals.