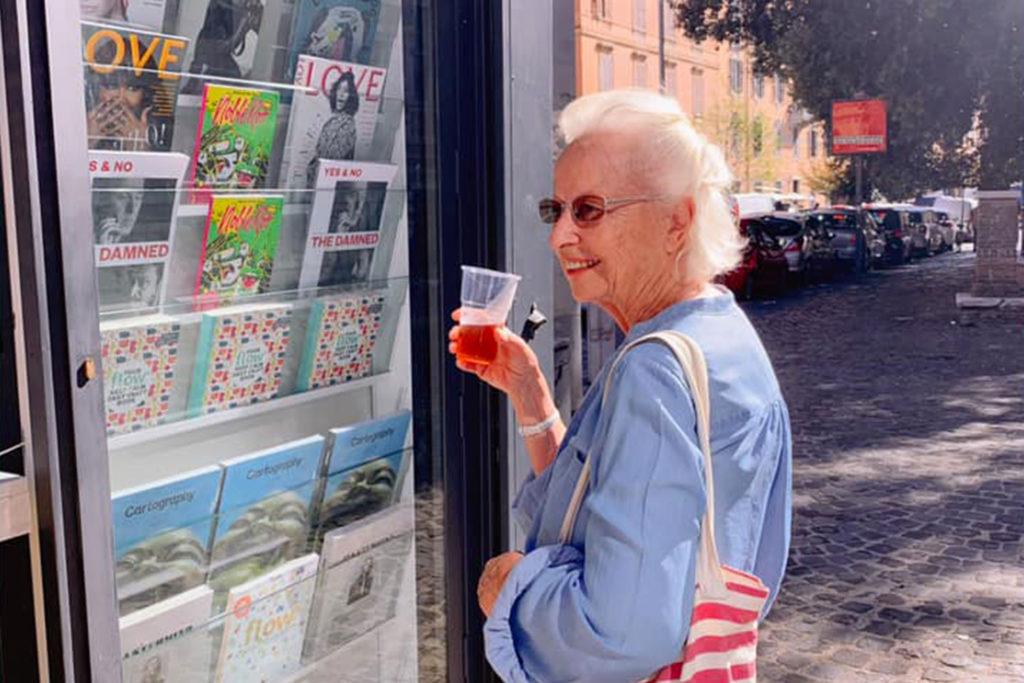 The only way to revive printed matter is to combine it with something to do: to talk, drink, eat and share, as seen at Edicola Romana Non Ordinaria in Rome

Against the trends of the market – ERNO, Rome

The Edicola Romana Non Ordinaria, or ERNO, is located in Rome, in the center of Piazza Capponi and in the Prati district in the heart of Borgo Pio, a few meters from San Pietro. It comes from the historic newsstand of the square, an old kiosk now closed for seven years — as many other newsstands in Italy.

In the last fifteen years, a lot of newspapers have seen sales drop by 50%. Erno’s activity goes against the trend of statistics and market. A new disposition allows newsstands to sell, in addition to newspapers, also a number of other products — such as drinks and snacks (this is the ‘bonus newsstands’ provided by the government in 2019).

ERNO, Rome – Despite the small space of a newsstand

«Being a newsagent is almost a hereditary job», explains Andrea Mercuri, a graduate student in Art History and owner of Erno, together with three partners Valentina Chiani (Civil Engineer with an architectural background), Alberto (Manager) and Davide (Lawyer).

«The owners of this kiosk keep managing the activity as it was done fifty years ago. We need to adapt to any situation». Erno has tried to differentiate its offer and design — despite the small space of a newsstand. A bench in white marble, a new lighting and electrical system, and the word Erno with a neon.

The name of the newsstand: an acronym

A Hungarian design architect who lived between 1902 and 1987 – Ernö Goldfinger inspired it. A life spent in Paris in the twenties where he approached architecture science by attending Le Corbusier, Mies van der Rohe, Auguste Perret, pioneer of reinforced concrete. Therefore, the interior designs realized for Suzanne Blum’s lawyer studio and the furnishing projects for the painter Richard Wyndham, were his first architectural projects.

In 1933, the first building, a holiday house in Le Touquet. Later, in 1951, the first realization of a modern Kiosk for the Festival of Britain, an event organized six years after the end of the Second World War; a national exhibition that first took place in London and then traveled throughout  Britain during the reconstruction of the nation after the war.

What is Erno? It is not a bookshop, nor a real newsstand

«There is no definition, we are a liquid project. The bureaucratic process was hard because of the unrealized project. some details were unknown to most of the involved people», confirms Valentina Chiani.

«We only choose magazines about fashion, design, architecture and arts in general», explains Valentina. «Magazines sales are positive, because we pay attention to the quality of our products. Newspapers, instead, are less bought. We will never sell gossip magazines».

Magazines selection and clientele at ERNO

«Domus, L’Architetto, Love, Flow, Cartography are just some of the magazines that we aim to sell, considering that even consumer’s interests have radically changed», says Andrea Mercuri: «These magazines are decorations». «Not only students and professionals, but also many design and architectural studios buy them for their waiting rooms or to cover the walls. In this way, the decorative object becomes interactive; you can browse and touch it».

To embellish Erno’s location is the historical Piazza Capponi: the surrounding buildings in Umbertino style, the area, the benches of the square and the vintage chairs of the newsstand. «This area of Prati», declares Andrea Mercuri, «is inhabited by journalists, architects, designers, artists. This is almost Erno’s clientele».

An example for realities in distress

The Edicola Romana Non Ordinaria was born as a meeting place. A friendly square for the neighbourhood. A representation of newsstands in the Fifties’. A place where you can eat and drink, too. A way to bring young people and students, during the ‘aperitivo‘ time. According to Valentina Chiani, the newsstands have a chance. «We would like our newsstand to be taken as an example by realities in distress. Politics has never supported us, we need an institutional footprint, both at local and national level. If the newsstands are bound to disappear, then an idea of transformation of the concept is needed».

This new experiment seems to give good results. «In the evening, some guys come to visit us to spend a relaxing time with their friends in the square. In the morning, instead, older people come to buy newspapers, generally people who live here in the neighbourhood. We also organize exhibitions, book presentations and cultural debates. We had, as a special guest, Marcello Fonte. The Golden Palm awarded actor. Protagonist of the ‘Dogman’ of Garrone, and the journalist Tommaso Labate».