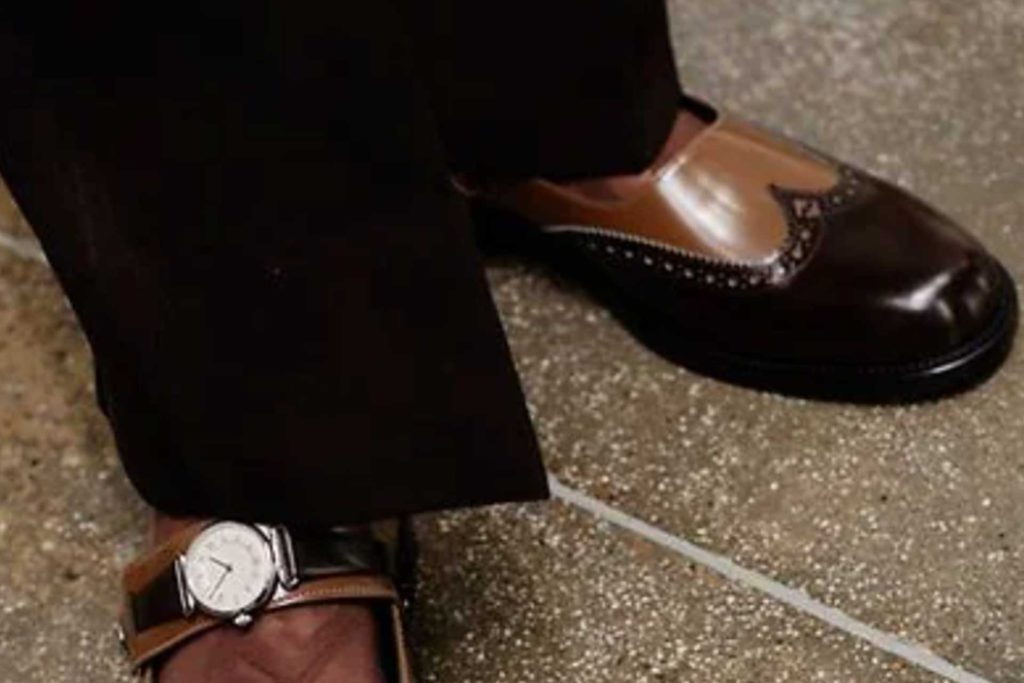 Fendi Men – going back to the Roaring Twenties. This is how people learn about repetition

A dandy aesthetic for Fendi’s autumn/winter 2022 menswear collection. Silvia Venturini Fendi on crafting an evolved image of his man in a gender-blurring show

Time changes past to present, stabilizing future and reality, an abstract way to order the chaotic movement which defines a cultural chapter of history. A century ago, the impact of the Roaring Twenties led to a recovery period after World War I: the seeds of social and technological change had already been sewn before the war, but the conflict accelerated this process and paved the way for a more dramatic break from the formalities of the past. Society was speeding up; airplanes were taking people across the country in a matter of hours whilst nightclubs became the venue for men and women to get dressed up.

Today, in the shadow of the Covid-19 pandemic, Silvia Venturini Fendi responds with her own interpretation of the Roaring Twenties.

Dandies were obsessed with ‘the other’, with the paradoxes of gender as an essential part of their lives: men embraced clothing as a form of self-expression. Small details like clever stitching, coordinated colors and standout accessories that elevated an outfit to an art form, underlined the importance of quality in clothing.

The collection Venturini Fendi presented for fall looked at the 20s style and aimed at meeting the need to return in full force reflected on «the dressing ceremony, which we have risked losing,» as the designer explained.

In the first half of the twentieth century, design took a radical turn from the previous conservative era with an emphasis on the new, the optimism, the less formal and the regimented garment construction. The collection was infused with the House’s disciplined tailoring and elegance with some eccentricities to lighten things up.

Directed by the Italian artist Nico Vascellari, the Fendi Fall Winter 2022-2023 runway show took place on a brushed steel elevated runway ramp in a mirrored FF configuration at Fendi HQ in Milan, with a live soundtrack by Alessandro Cortini. A journey into the past without carrying the heaviness of materiality. The looks were blended with feminine elements and revised, either scaled down or up. «We’ve had enough of streetwear. This is the moment to talk about a new sophistication,» said Venturini Fendi before her Fendi men’s show.

She dedicated the show to the young generation, to the ability to recognize quality of updating an old-world gentleman’s wardrobe. The designer worked on new proportions: Roman evening-wear silhouettes are celebrated with different shapes as the cropped, double-breasted jacket the designer introduced for spring, also gives more fluid volumes. Fall tones create a range of cold weather garments, an homage to the House’s history with a touch of raspberry and mocha, emphasizing the textures and the graphic patterns.

Blazer turned into flat capes, coats opened on the sides or the back to allow freedom of movement. New silhouettes have been unveiled, like Bermuda short with the tailoring and flow of a skirt, worn with sheer knee-highs and buckled two-tone pointed Mary Janes, whose design was amped up with the incorporation of a wristwatch on just one side of the footwear, right at the Mary Jan strap. «Mixing the classics has allowed me to create a new elegance and moderation that doesn’t mean boredom, but freedom. It means being able to wear a skirt and moving away from the declination of stereotypes». A fluid approach to the modern man, placing the body-consciousness at the heart of the proposal for Fendi Men.

Accessories were extensions of the garments: the Peekaboo bag pared back in its most architectural from the date, appearing as a large, structured shopper in grain leathers, FF logo paneling, suede, and in the season’s Vichy check wool, named Peekaboo FForty8. The Baguette was introduced in the same fabric as the clothes and shrunk as a miniature chain bag. The runway unveiled shearling floral brooches and crystal FF pendants, knitted O’Lock chain motif choker adorned with a single string of pearls which completed the looks. Chelsea boots and Fendi’s FF logo trainers redefined the 1920s aesthetic. «There was the 1920s, the 1970s, and now the 2020s, these fifty-year periods. And the 1920s is when Fendi was founded, so it all becomes one thing,» noted artistic director of  the Women’s s collection, Kim Jones.

Fendi unveiled her interpretation of the future by moving into the cryptocurrency space. Venturini Fendi used the show as an opportunity to launch her inaugural collection of tech accessories. In partnership with Ledger, one of the world’s top digital asset management companies, the label presented its first wallet for cryptocurrency. Created in the shape of the Fendi O’Lock logo, it was designed by Venturini Fendi’s daughter, Delfina Delettrez. The designer explained that the wallet creates a bridge reality with the metaverse, something people have to learn little by little. Although the collection didn’t declare the drawing of a new era of men’s dressing, as the designer revealed, it was a statement that it is already here.

Silvia Venturini Fendi and her narrative at Fendi

When the Fendi sisters hired Lagerfeld in 1965 as creative director, they couldn’t know they set in motion a partnership that would endure for decades. As a child, Silvia Venturini Fendi was near the creative core of the business. When she was six, she appeared in a Fendi advertisement, wearing a beaver bomber jacket and matching hat. After studying both in London and Italy in 1992, she joined the team in the main creative studio.

The creative director of menswear at Fendi represents the third generation of her family to work in a creative capacity at the storied Roman fashion house that bears her name.

Venturini Fendi’s first design moment arrived in 1997 when she created the Baguette bag, a petite oblong, short-strapped pochette meant to be tucked just under the shoulder. Since this first item, the label has made over one thousand iterations of the bag made with just about everything, from embroidered silk to mosaic-like beadwork. After two decades, her collection says as much about her vision for Fendi: a swirl of futuristic and retro influences, concerned with the past, but looking straight ahead toward the future. As Venturini Fendi revealed, the collaboration with Lagerfeld became a creative bond: the German designer brought her the massive fashion education she could have hoped for. Her latest collection holds the reality they both conceived: a craft evolved image of the Fendi man in an ever-changing world. Twisting and turning sartorial tropes, where formality is disrupted in playful gestures, breaking the boundaries of the archetype.

Neo-dandy looks: the shrunken suiting paired with a keyhole-neck jumper over a checkered shirt, along with the all-black ensemble featuring a cape disguised as a typical suit blazer that is layered over a silk shirt decorated with the O’Lock monogram. The collection celebrated the traditional menswear aesthetic without being tied down by conventional standards. Thrusting old-world elegance into the New Roaring Twenties, the latest Fendi collection is a treasure trove of future heirlooms – a further definition of a men’s wardrobe.

«We women wear men’s jackets. I do not see why they could not take inspiration from our wardrobe». A century ago, consumerism and mass culture took shape. It was the decade of art deco, jazz, Walt Disney and the Harlem Renaissance – the first truly modern decade, as noted by Marquette University economic historian Gene Smiley.

Inspired by that time, in the shadow of the COVID-19 pandemic, Silvia Venturini Fendi responds with her own manifestation of the Mad Decade.