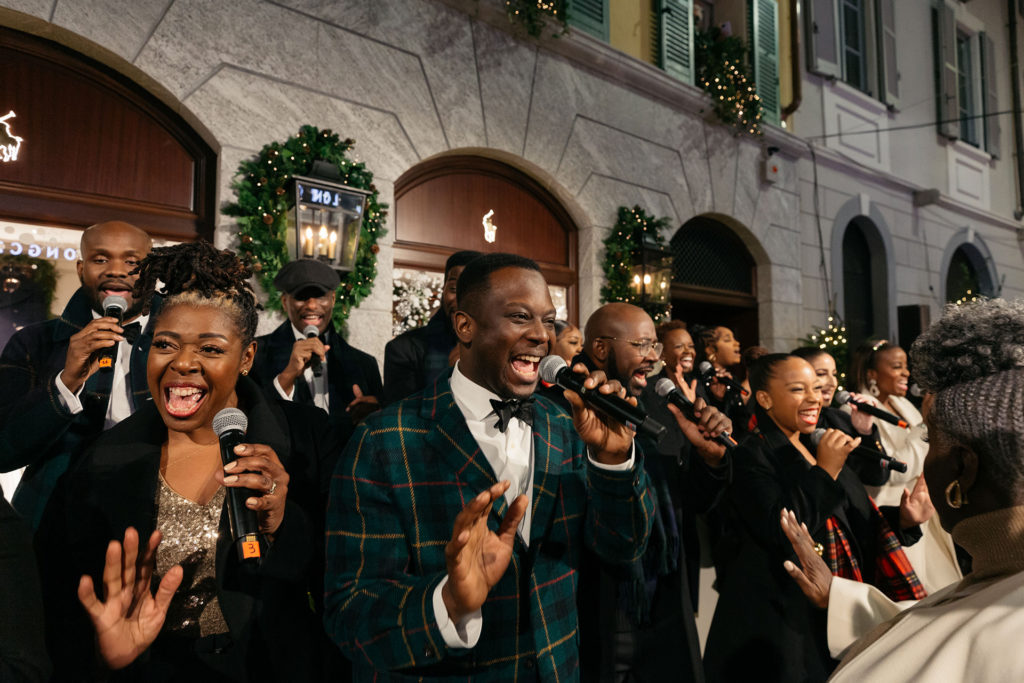 «We came in as strangers and we left as family»: The Kingdom Choir was on stage in Milan, in Via Spiga, for a celebration made possible by Ralph Lauren

From church to television: The Kingdom Choir, Karen Gibson MBE

Starting early on with radio and tv appearances, The Kingdom Choir demonstrated themselves as a group worth listening to. Founder and award winning conductor, Karen Gibson MBE, noted that the choir «became an entity in 1994, however there was no ‘I want to start a choir’. We attended a black led church in London, where there was a city-wide choir, and the leader Noel Robinson was head hunted by BBC Radio 2 to be the MD for the radio program The Gospel Train. The series visited various churches to record their service, and I was brought in on the choir as they needed some help, bringing along members from this London-wide black majority choir, in order to beef up the sound». Shortly after, the then nameless choir was asked to perform at the televised 35th Anniversary of Songs of Praise. The group lacked a name, «as we had only been The Gospel Train host choir and not a choir in our own right. I dreamt of the name The Kingdom Choir, which then stuck. That’s when we became an entity in our own right».

The choir’s timeline did not continue in a linear direction as it temporarily took a break after its initial start. Gibson describes, «I went to live in America where I studied at a bible school and when I came back I was aware that I was different inside. I did eventually start the choir back up again because choirs are part of what I do and I felt that there was a need for it, especially among the younger people that I was moving with».

The Kingdom Choir continues to evolve over the years with its origins in a small house church and a female friendship group; the choir’s current leadership (note not committee) is made up of a group of six women. «Elaine and I have known eachother for approximately 50 years through the church. When I was younger I grew up in this church, Elaine went to the same church, and my sister, Elaine’s sister, and my step-sister and another woman who is part of the leadership all went to the same church, and we formed a friendship group. My sister and I started with piano, and then we were advised to start a second instrument. We all ended up playing wind instruments together. Kim got to the clarinet first, and I was left with the oboe. We would play Gospel music on these wind instruments, creating a Gospel wind quintet. This cemented our friendship, and being in a black Gospel church, you sing all the time, therefore we would gather round the piano at church, and we would sing together. That’s how we got into singing. We have grown up singing, grown up with music and at some point within this relationship with the six women, we dispersed, but we later came back together again, around 2008».

The bond is almost visible between the choir members and in the leadership, «it has stood us in good stead for what we’re doing now. The richness of our history, we know each other and we have known each other for such a long time. The history that we have together means an awful lot. Our parents come into it as well, as they were always supportive, right behind us, encouraging us, I feel that it is also for them».

The choir continues to evolve and take form in parallel to the members’ growth. The group of 39 is an eclectic mixture of participants, from those who were present in its beginning days to younger singers starting their own experience in the warmth of Gospel music creation. With a range in ages from late twenties to early sixties, The Kingdom Choir is rich in experience and variety, aiming to integrate into the members’ lives and commitments, «we have a real mix. We have several creatives and artists, for whom music is their full time profession. Several work in schools, from classroom teachers to workshop leaders. Then there are business owners, such as a funeral director, and another who works in bridal wear… As a choir, we give people the space to be engaged in a way that they can».

The christian church has played a constant role in Gibson’s personal life and professional career, «our faith is very important to us and it sustains everything we do and how we do it. We have a shared faith as a group. We share our faith with others through our singing, however most of our songs are not actually Gospel, most of them are pop or inspirational songs but I believe that we are spiritual people. What is inside of us comes through and can have an impact on people. Through song we share messages of hope, love and joy… I fully expect that people come in one way and leave another because of what they have experienced through our singing. Our faith is a huge part of our raison d’etre».

Since performing on a world stage for the Royal Wedding of Prince Harry and Meghan Markle in May 2018, the group has gone from strength to strength. They have been signed by Sony Music and completed tours around Europe and the US. The group are strong believers of the impact their music can have, «the recordings are important, allowing people to access music as and when they can. However, there is nothing like performing live, nothing compares to the immediacy, the power and the passion, and not to mention the sound. As a teacher of Gospel music, I have seen so much love being released, and I have seen it transform lives». Long-time friend and choir member, Elaine Simpson, describes one evening of the tour in Canada where an audience member felt that «’we came in as strangers and we left as family’. Can that happen in one night? We want more of that».

In 2020 The Kingdom Choir toured all over America, the birthplace of Gospel music, with a notable shift during the 1930s from African American spiritual song to black Gospel music, often associated with the style of worship in Pentecostal churches. Gospel music began to infiltrate the charts and cross into the mainstream during the 1960s with songs such as Aretha Franklin’s Think (1968) and O Happy Day by the Edwin Hawkins Singers (1969).

«The American Gospel is seen as the pinnacle. During the tour in America, I learnt more about our worth as a Gospel choir. That we were able to do the Gospel in our way and it still be of worth and of value and at the same time still have an impact and be powerful. To understand that the most important thing is the spirit with which you sing».

Singing at a distance

Throughout the various lockdowns imposed due to the Covid-19 pandemic, the choir cancelled an upcoming tour and moved online, yet as with many activities it had its setbacks. «We went from having a lot of physical contact to no contact like everyone else. We went online and we would meet regularly, but singing together proved difficult. We had some good sessions but it is never quite the same». During this period, they performed at Royal Albert Home, Together at Home concert curated by Lady Gaga, Missguided performance, and «for the advent of George Floyd’s death, we felt that we had to say something, we chose Stevie Wonder’s Heaven Help us All».

In the run up to Christmas 2021, the choir was asked to perform during an evening of two celebrations, from the opening of the new Ralph Lauren store on via della Spiga in Milan to the promotion of The Kingdom Choir’s latest single ‘Together Now’. The performance at the inaugural evening for Ralph Lauren created a moment of joy as the evening’s event called in the beginning of the Christmas festivities. The single’s title is a reference to the statement made by the British Prime minister, Boris Johnson, in December 2020 regarding lockdown measures introduced a few days before the Christmas holidays.

The regulations aimed to limit the number of people meeting up over Christmas and New Year’s, calling on citizens to enjoy a smaller and shorter celebration in order to minimise contact and avoid spreading the virus. The Kingdom Choir’s message, through the medium of Gospel and traditional Christmas songs, aims to uplift all who have been through the past two years and to remember that Christmas and the end of the year are periods of joy, community and spreading kindness to others. After a lengthy period apart, families and friends can be ‘Together Now’. «Gospel music is love, hope and joy, which are positive and uplifting, therapeutic even. We know the power of what we’re doing. We know what we are saying. We know how people feel».

London-based Gospel choir The Kingdom Choir performs Gospel and pop renditions, founded in 1994 by conductor Karen Gibson MBE. Having worked with The Kingdom Choir and Maria Fidelis Gospel School Choir, Gibson has been the recipient of several awards including BBC Radio 2 Church Minstrels of the Year, the Gem Awards Best Gospel Choir, Best Gospel Album, Songs Of Praise Senior School Choir of the Year and the Wise Women Award in 2015.  Consisting today of 39 members, the group have toured around Europe, USA, Canada and performed at the Royal Wedding in 2018, Royal Albert Home in 2020 and several other large events.