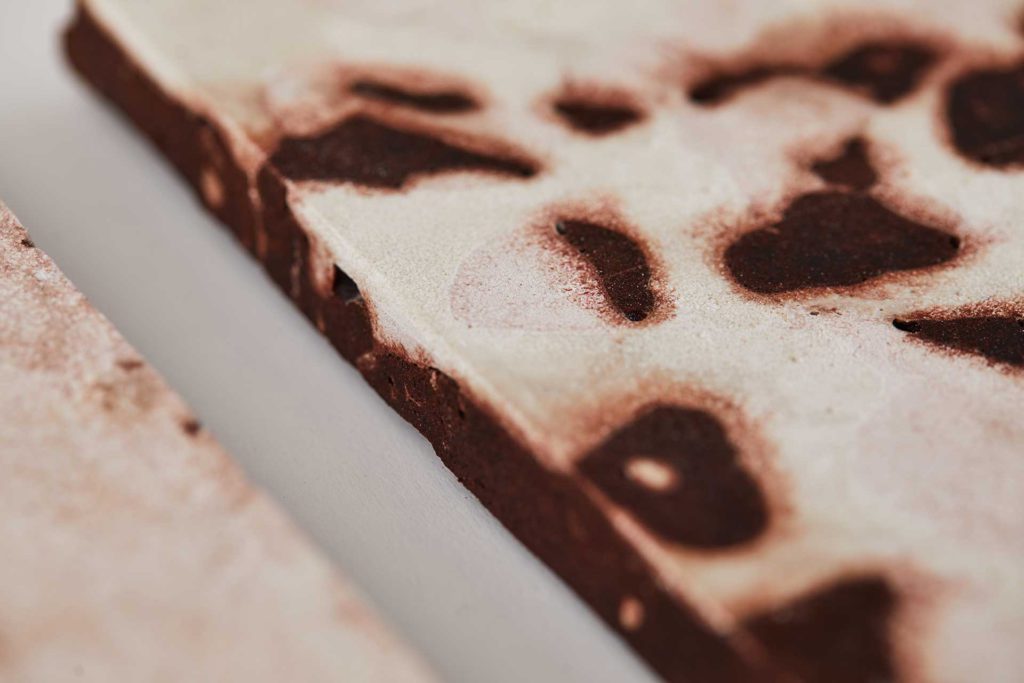 Regenerative materials in architecture: bio-concrete from species that disrupt the food chain

Killing two birds with one stone: developing a bio-concrete whilst helping out ecosystems. A look into regenerative properties

Resources found in the biodiversity

According to the 2019 State of Nature Report, climate change and pollution harms biodiversity only by a small fraction. There are more complex levels which threaten the ecosystem, a primary danger being invasive species. Brigitte Kock and Irene Roca Moracia developed a regenerative concrete-like material which gives new value to these harmful species.

«The inspiration for this project was nature itself», Kock points out. «We decided we wanted to do something that has a bigger impact than just the product itself. Working with something miles away doesn’t make sense so we wanted to look for invasive species that can be found in London».

The Japanese knotweed and the American signal crayfish are invasive to the local biodiversity, growing at extreme rates. These are the main ingredients which Kock and Moracia use for their material.

The development of this bio-concrete wasn’t born out of trying to come up with something new. Moracia explains that it was merely reintroducing how things were once done in the past. «I have always been fascinated by how ancient constructions from Romans, from Egypt and from Greece are still standing in the whole of Europe, and how they developed things like concrete or mortar which are still almost intact».

Nowadays, building and construction materials resist less, corrode faster under water and are more affected by the weather. By sourcing these invasive species, they produce a new material using an ancient concept. The focus for the time being is creating this material, which resembles tile-like finishes, for interior purposes such as surfaces.

The reason why invasive species can harm biodiversity to such a serious extent is because they disrupt the food chain in a negative way. They are not native to an ecosystem. Once introduced to an environment, they can easily overpopulate and take over. According to the National Wildlife Federation, invasive species are putting at risk around forty-two percent of threatened or endangered species.

Climate-change is also at risk. «Invasive species are one of the biggest dangers to global warming. People tend to think that invasive species are causing just small environmental issues but actually they are costing much more. Here in the UK, they cost the government over £2 billion every year», Moracia explains.

Completely eradicating these species is not an option given how rapidly they spread. For example, it may be possible to control the number of crayfish in ponds, «but when it comes to rivers there’s really nothing you can do», says Kock. Whilst according to Moracia, «the knotweed plant was brought here at the end of the 18th century, which is almost two hundred years ago, so it’s just too late to control it».

Obtaining these invasive species is harder than one may expect. There are a lot of bureaucratic laws which surround how these species have to be handled. «It’s complicated because as soon as you cut it, it gets classified as invasive waste», explains Moracia. In their case, they find it simpler to work with the industries who have these species as part of their waste streams.

They source the knotweed, for example, as ash once the factories burn them. This may differ between organizations; some public parks cut the knotweed, leave it to dry whilst others seal them and then burn them. Either way, the ashes of the knotweed is easier to obtain as it imposes less danger to the ecosystem. This is what they integrate into the recipe for the bio-concrete as a binder. Moracia illustrates that Romans used volcanic or, if that was unavailable, wood ash as a binder in the past.

However, newly introduced legislation states that they are no longer permitted to do so and are only allowed to sell them frozen. This has declined sales drastically as seafood restaurants would much rather receive fresh produce which is «meanwhile imported from China», admits Moracia. The crayfish shells are used as the aggregate in the production.

The production process of the bio-concrete

As Moracia and Kock explain, the production process of the material isn’t extremely complicated, it is just a lot of trial and error. The procedure remains the same, the recipe is the one that changes. It consists of mixing the ingredients together with some water, which creates a chemical reaction, binding it all together.

Then it is cast in different wood-framed moulds. The most surprising twist is the color that comes out post-production. «The deep red color is completely natural. It was a surprise because when it’s fresh, the root of the knotweed is yellow, almost turmeric in color, and when we mix everything together, it just turns bright red», comments Kock.

The pair didn’t have any plans color-wise for the material, they first wanted to make sure that actually creating a bio-concrete was feasible with these types of resources. The finished product, for now, is made for interior finishes, such as surfaces or tiles. Given the importance of structural integrity, the material does need to undergo extensive testing before it can even be considered for structural purposes.

The simplicity of the project

Usually, in the development of new innovative materials, the cost increases. This may be for the resources required, or the research that needs to occur or any number of things. However, in this case, everything is already procured. They use the bi-products which are already getting created. The method of production has been around for millennia and the resources make up part of factory waste streams.

The production process requires minimal cost and the important finishing touches (such as the color) occur naturally. The simple nature of this project reduces the risk of it being unsustainable. Burning the knotweed may require energy and does involve a degree of pollution from the factories, however, whether or not Moracia and Kock use the ash of the knotweed, the companies will still burn them.

«The tricky part is you have a lot of legislation to dance around using invasive species», explains Kock. Moracia explains: «If the plant is in your garden, you can’t just cut it and throw it away because you will get fined. Once it is cut, the plant is classified as invasive waste which is dangerous so you need a company to do it. The danger is that it can spread if it isn’t gotten rid of properly».

Why biodegradability in this case isn’t as sought out after

Biodegradability is a property which many projects seek to have. However in this case, Moracia and Kock admit to not entirely appreciating it in their material. «It is currently biodegradable but that’s something we were trying to avoid. It will also probably be biodegradable later on but we need to somehow seal it so it doesn’t get affected in the long-term», clarifies Moracia.

«When it comes to biodegradability, it depends on what type of product it is and its lifespan. In the case of buildings, you want them to last for a long time. It is all made from natural materials so even if it takes a long time, you would just be able to put it in the ground and there wouldn’t be any issues», Kock adds.

What’s more is that it is considered as a regenerative material. «Sustainability is seriously not enough. We need to create something which has a positive impact, not just staying on the same level», says Moracia. Coming from an architectural background, the thought process behind being regenerative is one step above being sustainable.

«Sustainability is aiming for zero and so everything we create needs to equal zero carbon emissions, for example», explains Kock. «That is a very constructive way to think because it’s about listing everything we can’t do. Also, everything is more expensive so people just shut it down. Regenerative is this next step where we think about how to make something which has a positive impact, the opposite of what we’re doing right now. With this project specifically, we have a sustainable alternative for the material because we are aiming for zero where we don’t have any extra emissions. On top of that, we go a step further by saying that actually, by making this material we are improving biodiversity and that is how it becomes a regenerative material».

This is carried out by taking into consideration how the use of invasive species can create something beneficial. As mentioned before, controlling the spread of invasive species is not a simple process. There are many procedures which can be implemented for this such as manual projects, chemical applications and naturally introducing other species to balance out the ecosystem.

Using this concept for future ways of doing

This project was commissioned as part of LVMH’s Maison/0 graduate program. This is what gave the pair their first investments to carry on the project. Up-scaling this would require standardizing the production process which is something that they are working on. Similarly, they decided to focus on local matters by using invasive species found in and around London.

However, the methodology can comprise other species which are harmful to biodiversities from all over the world. In terms of structural use, much more needs to be done. Using invasive species as a way to expand the world of regenerative materials may bring around new opportunities in the realm of architecture and interior design.

Although much more research and development needs to occur, including re-working legislation in obtaining these species for such purposes, the idea is not far fetched. The concept is more cost-efficient, goes a step above sustainability and does not require complicated production processes. Moracia: «We were looking at how nature is the biggest concept of luxury itself. It’s in danger and it’s disappearing».

As part of the Maison/0 graduate program run by the LVMH group, Brigitte Kock and Irene Roca Moracia developed a new material. Using ancient know-how and invasive species, they created a regenerative bio-concrete from Japanese knotweed and American signal crayfish.