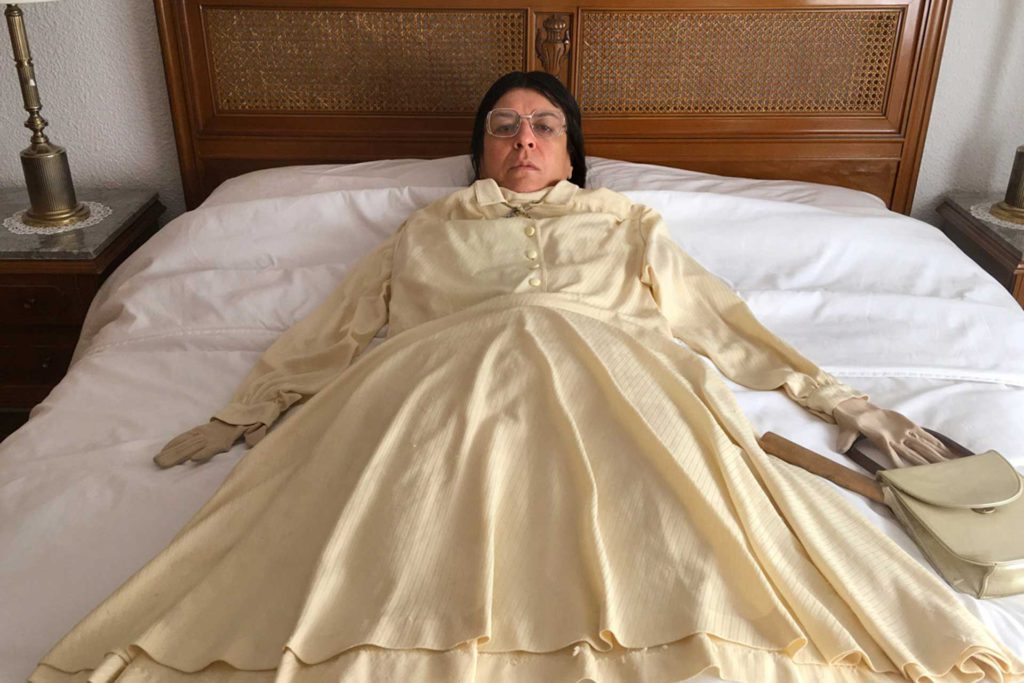 Women are not sexual objects. Miss Beige’s performances prove it

From Mother Mary’s crown to black baby Jesus, Miss Beige has a myriad of advocacy to convey

The introduction of Miss Beige begins with the anti-selfie; through play and with her gaze turns the spectator into the spectacle before she endorses her limited edition prints for sale. These prints overview the humor, doctrine, and purpose she embodies in her practice: beige as the primary palette of her aesthetics, a purse, and a hammer. «In our motley world, which not even rigorous black can neutralize anymore, beige emerges, an impartial tone that transmits peace and tranquility. At the same time, beige, an insipid and unreliable shade, goes further as its mere presence manages to soften the saturated colors. On top of that, I thought it was about time to start a revolution using the unexpected, so humans will stop taking things for granted».

Behind the moniker of Miss Beige, a personality conceived in 2015, Ana Esmith runs the show. While studying in high school and university, a few teachers dubbed Esmith as a defender of the poor, a voice who spoke up without fear and a person who dared authorities when they abused their power and knowledge. Esmith drew her influence from this and transported these traits into the character of Miss Beige: part Esmith’s advocacy to speak up, part caricature for social media consumption. After fifteen years of living in London and traveling the world, she flew back to her native Madrid.

Families, friends and acquaintances bombarded her with questions on the reason for her return, what she would do next and why she looked straight into the camera whenever she would post pictures on her social media platforms. Esmith responded four months later with the creation of Miss Beige. She took her to social media in 2017. Instead of submitting laws to be passed or revising existing policies, Miss Beige employs humor and a poker face, an infusion of sarcasm and action, defending the poor and voicing the voice of the voiceless.

Sarcasm as a coping mechanism

In an article by Clifford N. Lazarus, a licensed psychologist and co-founder of The Lazarus Institute, writes that if one desires to be happier and improve on their relationships, they must cut out sarcasm. This is the first impression one may have on what Esmith does. «What is more, since actions strongly determine thoughts and feelings, when a person consistently acts sarcastically it may only serve to heighten his or her underlying hostility and insecurity. After all, when you come right down to it, sarcasm can be used as a subtle form of bullying—and most bullies are angry, insecure, or cowardly. Alternatively, when a person stops voicing negative comments, especially sarcastic and critical ones, he or she may soon start to feel happier and more self-confident. Also, the other people in his or her life benefit even faster because they no longer have to hear the emotionally hurtful language of sarcasm», he pens while also noting that it would be best to use sarcasm sparingly rather than an everyday go-to.

So Miss Beige does not speak when she conveys her sarcasm, but wears beige and carries her purse and hammer wherever she goes. One time, she lugged a delivery bag as her backpack, roamed around la Feria Internacional de Arte de Madrid (Arco) in 2020, attempted to blend in with the decked-up crowd, and, an hour and a half later, was expelled from the event. Titled Paseo en Glovo, Miss Beige displayed her stance on the expo’s reinforcement of commercialism. In her words: «It seemed appropriate to show Arco what it hates or refuses to see».

The fight for rights

Aside from commercialism, Miss Beige fights for rights, especially women’s rights, hence the hammer in her purse. The International Human Rights law by the Universal Declaration of Human Rights, adopted by the United Nations General Assembly on 10th of December 1948, embodies gender equality by recognizing that «all human beings are born free and equal in dignity and rights and that everyone is entitled to all the rights and freedoms set forth in this Declaration, without distinction of any kind, such as race, color, sex, language, religion, … birth or other status». As the UN focuses on its Sustainable Development Goals, it puts forward women having an essential role to play in all of the goals, with many targets recognizing women’s empowerment and equality as both the objectives and the solution.

Although Goal Five aims to achieve gender equality and empower all women and girls, changes in the systems of law and legislation require concrete actions. According to a report by the UN, a record 143 countries have already guaranteed equality between men and women in their Constitutions since 2014, yet fifty-two other countries had not taken this step. Disparities in gender within the realm of politics and economics mean that, on average, women in the labor market still earn twenty percent less than men, and as of 2021, only twenty-five percent of all national parliamentarians were female, a slow rise from eleven point three percent in 1995.

«Any abuse to human rights, or simply anyone who does not want to follow the rules, will have my support and my hammer», Miss Beige begins. For the magazine’s issue 24, Miss Beige hides behind a box resembling a package ordered and delivered at home, her white mesh gloves crawling onto the top portion of the carton. She transfers to the living room where she kneels on the parquet floor, leaves her purse and hammer next to her, crawls inside a tent designed for infants, and fits only half of her body inside the accommodation.

Tired from kneeling, she stands up, sits on an exercise ball stuffed in a chair, and tiptoes as she attempts to settle in. «As a human being, I think good protection is always a part of our existence. As an artist, the rituals of appearance, the aesthetics of artifice, and the reflection on gender are part of the conceptual background of my work where I invite you to play and release the image of femininity understood as a cultural construction based on arbitrary conventions often imposed over centuries. As a woman, it is a must gesture to take our rights seriously. Women get harassed and killed all around the world. Dear Patriarchy, stop messing with our lives and respect us as human beings regardless of our gender», she continues.

She removes her clothing, lies in bed, covers her body with the comforter, and sprawls her clothing, purse, and hammer on top of the sheet as she gazes into the lens of the camera. She dons her beige dress again, walks out of the apartment to visit the abandoned rides in Parco Sempione in Milan, and hops on one of the dust-covered motorcycles for children. After the ride fails to function, she hops off, strides towards a wig shop and poses, her beige aesthetic standing out in front of rainbow wigs. On a lawn, she sets up her beach chair, reclines on its surface, places her purse and hammer on her lap, and looks above where the camera hovers. «I think there are no limits in the art world. I like playing on the edge, mixing reality and imagination. Miss Beige belongs to reality and interacts with it, but she does not modify anything. Instead, she offers us a look into what radical realism in desperation means. Miss Beige and the streets are the subjects. This suggestion, through an ordinary appearance, makes the viewer rethinks their new ways of seeing, observing, or looking at the world. It proposes a game that questions the great truths and established customs in order to stagger or at least question the world around us».

As a reinstatement, she poses in front of the raised middle finger at Piazza Affari in Milan for Lampoon, the work of Maurizio Cattelan titled L.O.V.E. On her Instagram, she wears Mother Mary’s crown on her head, holds a black baby Jesus in her left arm, and clutches her purse and hammer on the other arm. She goes to a beach, nudges her wheel float to the sea, and sits on it with her wet clothes on. She works as a DJ. She swings her feet to mimic the woman beside her doing the same. She masturbates the stick stuck in a drum as a crowd dance behind her. She holds a torch and storms towards the camera, a reenactment of the townspeople burning a witch.

«The presence of Miss Beige, either in a photo or in a performance, questions the established stereotypes that have influenced who we want to be and how we want to show ourselves, or rather who they want us to be and how they want us to show ourselves. She is an example of the transgressive power of imagery when it comes to presenting the streets and the canons of beauty. Beyond that, women in general are subject to universal canons of beauty. I, myself have been and still am a victim. This fact has caused that the woman is not and does not feel free when it comes to playing with her image. So, this fact has us doomed to eternal inequality. At this, Miss Beige shouts: ‘Down with the genre! Up with the beige!’ And she throws us this challenge: do you dare be beige?»

Miss Beige is the creation of the Spanish revelation in performing arts, Ana Esmith. She’s an actress, journalist but above all, a performer who loves making people laugh. The character she embodies plays as a political act and is kept away from her private life. She lives between Spain and the UK, regularly performing in London’s cabaret scene as well as cultural hotspots all around Europe. Two are the symbols that identify Miss beige: the color of her dress – a color that does not offend anyone – and the bag that she always carries with herself. Though she defines her work as ‘sassy’, Miss Beige reached high popularity thanks to her sense of humor.