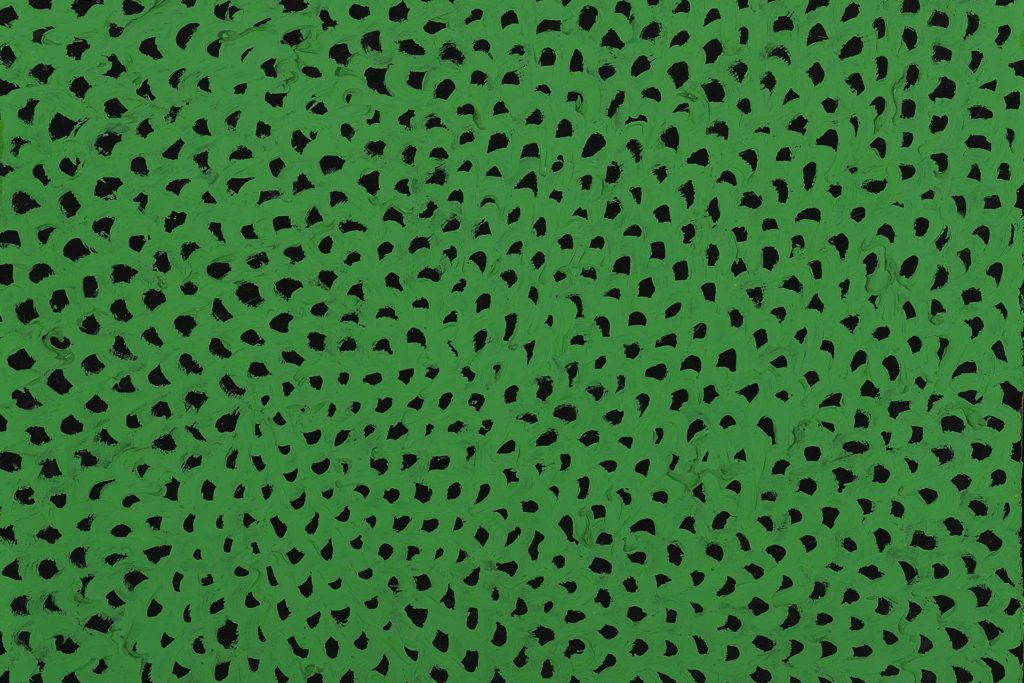 Robert Shore chronicles the art of Yayoi Kusama: «the discovery of her father’s affair left her with a lifelong aversion to male genitalia; the dropping of atomic bombs left a sense of reality as a hallucination»

Holding a PhD in writing from Cambridge University, Mr. Shore’s graduate dissertation concerned the development of culture in the time of Oliver Cromwell. The English general overthrew Catholic King Charles I, ushering in an era where the new Puritan aristocracy was eager to distance themselves from the previous regime, and longstanding systems of patronage, much as changing tastes in the art world have dramatically reshaped popular conception of Ms. Kusama.

«One thing happened with the English theater which was that there was a ban on the spoken word on stage. The leading poet laureate, William Davenant, who narrowly avoided escape, fearing his head cut off in the revolution, came back and said how about if we sing instead? In this way English Opera was born, the first works of opera in English were performed as a way of getting round the prohibition on safe place».

His fascination with the arts continued, taking jobs as a theatre reviewer, contributor to Art Review settling in as editor then creative director of Elephant, the quarterly contemporary visual art magazine. Robert Shore hails from the Midlands, the middle-ground within the country so often divided between North and South. His biography of Andy Warhol was published by Laurence King Publishing in 2020, and upcoming book Yayoi Kusama by Robert Shore is due to be published in April 2021.

His biography is a chronicle of the artist’s life, deciphering the similarly conflicted and enigmatic persona which surrounds Japanese artist Yayoi Kusama, from her study of the classic ‘Nihonga’ technique of Japanese painting, to her time in New York and eventual return to her home country. He centers on the tensions that defined her work.

Struggle between the artist’s mental health issues and her purported lust for publicity, as well as conflicting identities which lie split between the East and West. Alongside these eccentricities is Yayoi Kusama’s rapid shift of media, moving shifting between avant-garde painting, sculpture, installation, fiction, and more recently commercial products through which Mr. Shore exposes a thread that gird Ms. Kusama’s body of work.

Mr. Shore’s first encounters with the work of Ms. Kusama came from a viewing of Yayoi Kusama’s Self-Obliteration, the 1967 experimental film, produced in conjunction with filmmaker Jud Yakult. The film centers around the naïve idea of individuality and self-conception, and its subsequent destruction. Heavy use of polka dots and dissolves between scenes evoke a sense of oneness among its human subjects.

«That work locates her at the heart of New York, radically, in the Sixties». A central theme that flows through Ms. Kusama’s works is the use of art to showcase the darkness of human consciousness, and an attempt to heal, often through deconstruction. Mr. Shore’s subsequent discovery of Ms. Kusama’s lesser-known work – a quasi-autobiographical novel Manhattan Suicide Addict, published in 1978, opened up his view to the multi-dimensional and shape shifting nature of the artist’s work.

Hailing from a wealthy, land-owning family in Matsumoto, northern Japan, Ms. Kusama was a child during World War II, where the discovery of her father’s affair left her with a lifelong aversion to male genitalia; the dropping of atomic bombs left a sense of reality as a hallucination. She began to experience psychedelic dissociative episodes, seeing visions of polka dots covering her world. Expressing a desire to make a career in art, she was sent to the Kyoto School of Arts and Crafts to study Nihonga a traditional form of Japanese painting in vogue during the pre-war Imperial Period.

She resisted conservative teaching methods, preferring to sketch images of onions and pumpkins, subjects that would resurface during her resurgence in the 1990’s. This period starts her process of fusing systematic application to subversive techniques, evident in her later ‘Infinity Nets’. «We see recurrent motifs emerge that underpin her career». Ms. Kusama briefly returned to Matsumoto, beginning her first avant-garde paintings, before destroying most of her work and moving to Seattle and then New York.

«When she gets to New York in 1958, Georgia O’Keefe tells her to get in the street and take your work around. This is the moment where you see the radical potential for development before she has chosen a core. That the moment is innovating and trying things out».This period is marked by a rapid transition in form. «Coming to America must have been quite a revelation in terms of just a certain kind of freedom of operation. She starts producing on a very small scale, and then suddenly she begins making paintings that are 33 feet in length. It’s clear with Kasama is that although you know so when she does abstract expressionism, she does it with an idea that’s already quite deep in her so that it comes out looking like her for work, not like a pastiche. With pop it’s much hers, so you’ve got something that in a sense has already solidified there».

Eschewing painting, she began fabricating her Accumulations series, phallus covered sculptures, before creating installation boxes filled with mirrors, sometimes accompanied by music. This outpouring of work serves to communicate the artist’s – who had become infatuated with committing suicide by leaping from the Empire State Building – internal mental anguish to the public. Aware of her outsider status as both Japanese and a woman, she decides to use it to her advantage.

«At her openings in the 1960’s she dresses in a kimono, whereas photos of her in Japan suggest she doesn’t tend to wear traditional or ceremonial dress, but she grasps that there is a power in that». Finally, Ms. Kusama moves past physical work altogether, instead organizing political nudist happenings in protest of the United States government. «In the 1960s she’s responsive to everything that’s happening in America and in the world generally. She writes a letter to President Nixon and has these Vietnam War protests». Simultaneously, the embrace of nudity formulates a form of exposure therapy, a way for Ms. Kusama overcomes her phobias through direct confrontation.

In conflict to her work at this time, is an obsession with publicity and a fondness for commerce. In 1966 she traveled to Venice for the 33rd Biennale, exhibiting a field of 1,500 mirrored plastic balls, which she sold to the exhibition visitors for two dollars, infuriating the show’s organizers. She hired a press clipping agency to record published mentions of her name, claiming in 1967 to have surpassed Andy Warhol.

«That development is that of the collapsing of an old fashion idea of the art world, brought about by the Pop Art movement. You can see a similar sort of Arc in Andy Warhol and other artists. Oldenburg had his store, selling his work as though in a supermarket. In an Oldenburg gesture she demonstrates somebody who regards herself as a fine artist not working in commercial art. The tension between commercial art and fine art remains there to this day».

Lofted by her success in the art world, she turned to commercial endeavors, opening her Kusama Corner in the tony Bloomindale’s department store and founding Kusama Enterprises to produce events, theatre productions, film and body paintings, among other artworks. Unable to recapture her earlier success and accused by the Village Voice of overexposure in 1969, her business ventures folded, and she returned to Japan in 1973.

«She appears a bit distressed that actually Japan is not in the same place as the US, and that she’s not taken seriously. Her work is regarded as just sensational. She’s aware of that line between art and sensationalism, but at the same time not always able to control it. That she was taught to think of herself as different and as an outcast very early on guided her art as insistently a way of making you see things the way she does». Virtually forgotten by the New York art scene, Ms. Kusama’s mental state deteriorated further, and in 1977 she took up permanent residence in Tokyo’s Seiwa Hospital. She spent her time staging exhibitions and publishing fiction work with apocalyptic, suicidal, and anti-capitalist themes.

In 1989, the Center for International Contemporary Arts (CICA) put together a show titled Yayoi Kusama: A Retrospective, creating a resurgence of interest in Ms. Kusama’s work from her time in New York. «This different kind of show is possible because you’ve got a younger generation of curators who begin to see something there that is maybe harder to grasp. The globalization of the art world naturally accompanies this».

The outsider status that she had grappled with was embraced and morphed into instant art world cachet. She resumed making art reminiscent of her New York era, working once again across painting, installation, and sculpture. «Oldenburg said it’s actually the repetition that’s important rather than the particular objects. Not only if they recur across a long period of time, but when they recur within a work. It is the motif which is a structural device for the work itself, which then structures the career. The use of the pumpkins, for instance, is much quieter in the early part of the career, and then blossoms in the 1990’s».

With her Tokyo studio situated now across from the Yayoi Kusama Museum – opened in 2017 and devoted to promoting her art – Ms. Kusama has become an establishment. Still suffering from mental health issues, her art remains a curative endeavor. Even her dreams of creating products were realized: she created a series of handbags for French atelier Louis Vuitton. From the position of her current widespread fame, her previous fixation with fame may be framed as a visceral need to make others understand her mind, not a calculated plot for publicity.

«Her art reaches its apex in the sort of installations that now draw massive crowds and authentically so, because in terms of popular successes, they’re among the most authentic. The viewer must put themselves within that and what they take out of it is deeply personal and experimental. You have an artist who wants to work in every medium that is available. The world hasn’t become less interesting for that». Ms. Kusama’s next exhibit, titled KUSAMA: Cosmic Nature and contains four works, opens April 10, 2021 and will be exhibited throughout The New York Botanical Garden.

Robert Shore is an artist who lives in London, U.K. He has published books about advertising, travel, and art, most recently Andy Warhol.

Contemporary artist who resides in Tokyo, Japan. Associated with Pop Art, American Abstract Expressionism and minimalism within the New York art scene of the 1960’s, Ms. Kusama has experienced a renewed interest in her work since the 1990’s.