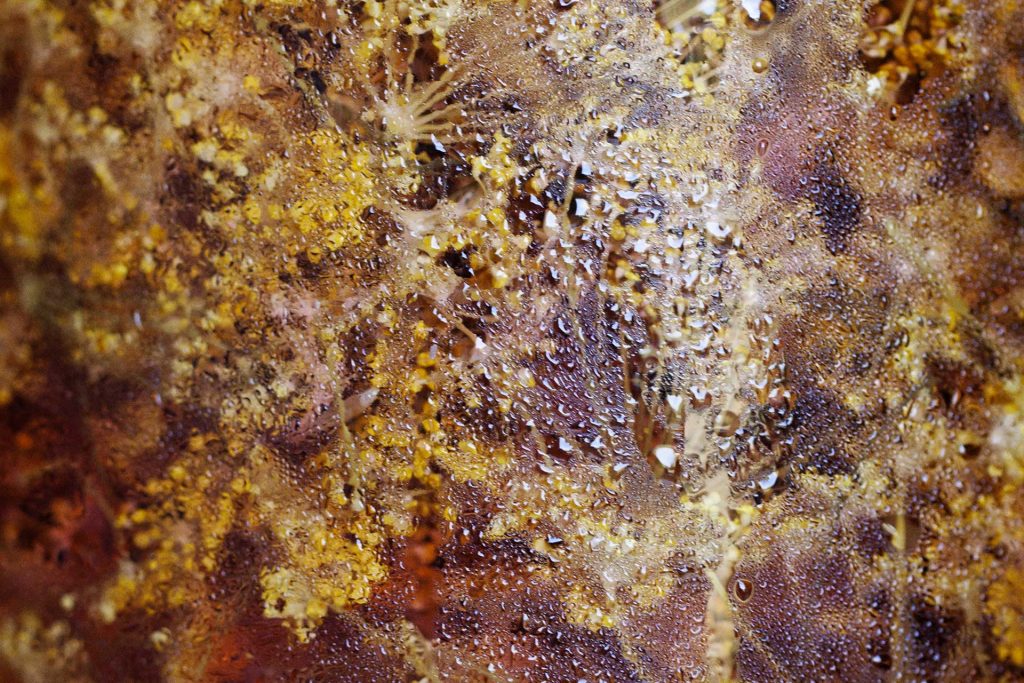 Kadeau, Copenhagen. A brick-red door and a bell to ring upon arrival

A greenhouse made of black raw-steel and glass to enlarge the space dedicated to the lounge room. It allows guests to appreciate a glass of wine before or after the meal

Bornholm Island, in Denmark, is located between Sweden, Poland and Germany, far from the capital city of Copenhagen. Nicolai Nørregaard, chef and founder of Kadeau restaurants, was born and raised on this island. In the past he was apportioned between his appetite for music and intention to pursue an artistic career. What prevailed was a restaurant. Surrounded by a family that indulged in food, he has been in touch with preservation and fermentation techniques as a boy, that he uses in his two restaurants. «My grandfather worked with vegetables and spent his time fishing, cooking, preserving and fermenting fish. My uncle had a smokehouse in Bornholm, where I observed him using traditions of preservation up until 2010», says Nørregaard. Starting in the late 1990s, Nørregaard began working during the summer at restaurants in his hometown. One of them was Svaneke Pakhus, a family restaurant where the collaboration with his business partner, Rasmus Kofoed began. After gaining experience as a chef, in 2007, Nørregaard and Kofoed decided to invest in a spot on the island of Bornholm and gave it the name, Kadeau. «We thought of going back to our birthplace because nature is lush. We made the choice to open in Bornholm, as we wanted to embrace Nordic cuisine using products coming from Scandinavia and our island». The philosophy he espoused is that of Bornholm Savoir Cuisine, as the thread lies in the products the island offers through its seasons.

The evolution of Kadeau Bornholm was the sister restaurant founded in Copenhagen in 2010. Driven by the need to spend time with their families, they decided to alternate the two seasons in two locations. After the 2011 summer in Bornholm, Nørregaard and his staff moved the restaurant to a space in Copenhagen. The owners considered the latter to be a project of minor statute, but it began to gain acceptance among customers. The urge to meet the needs of Kadeau Copenhagen’s visitors forced the team to look for a restaurant of size, in Christianshavn, that fit the concept. The accolades bestowed on the restaurants are a total of three Michelin stars, which have been awarded to them over time. As Kadeau Copenhagen opened, it was given its first Michelin star for the production and concept that tied the restaurant to Nørregaard’s birthplace. In 2016, Kadeau Bornholm received a Michelin star once it was given the possibility to confer in Denmark. Kadeau Copenhagen was awarded its second Michelin star following the restaurant’s relocation.  The file rouge that binds the souls of the restaurants is represented by the island of Bornholm. «The microclimate is distinctive from the rest of Scandinavia. It has every geographical structure: shores, hills, caves, flats, meadows and beaches. The soil is lush allowing us to exploit its nutrients», says Nørregaard. The environment differs from the Danish territory, which is cold and arid to grow vegetables and fruit. The chef is familiar with the land in Bornholm and Copenhagen. One of the techniques Nørregaard uses is the preservation of foods. Among the ones he mentions are tomatoes, figs and their leaves. During summer on the island, the staff is engaged in serving customers, harvesting, preserving and fermenting the ingredients that are required for the winter in Copenhagen.

Nørregaard has embraced sustainability, which has been a cornerstone of the chef’s approach. «Sustainability can be a way of life, and be embraced by restaurants of every size». Nørregaard buys vegetables, fruit, fish and meat from local producers. As for the preserves, the owner and founder of Kadeau confesses that they cannot be considered in this category, as they include products and materials that are gathered from the wildness of the island. Among the dishes created is a dessert of preserved figs, before they turn ripe. «Preserved figs are served at Kadeau Copenhagen a month later, they are cut in half, fried in butter, salted, glazed with honey and topped with a cold-cream. The icing on the cake is the honey we pour over the dessert. It is honey harvested after pollen season. This is possible because we keep the hives active, causing the bees to collect pollen not from the flowers, but from the fruit that has fallen from the trees. The peculiarity of this product is that it appears black once poured on the dessert, creating a contrast», explains the chef. When Kadeau Bornholm opens, each year a revised menu is presented inspired by the goods that the island provides. In Copenhagen, Nørregaard gives structure to the menu; he changes dishes depending on the products at his disposal. Following this philosophy, there are no signature dishes on the menu. Products are reinvented and presented through the use of side dishes, soups and vinaigrettes. This accuracy is given to the wine list, which is expanding. Kadeau Copenhagen enumerates a list of natural-wines, two self-produced cider cuvées, and a number of classic vintages, curated by business partner Kofoed and sommelier Tom Nevati. Guests can peruse a non-alcoholic pairing, consisting of juices, vinegars, ferments and kombuchas that accompany dishes curated by Nørregaard according to the Nordic style he encourages.

Through design, architecture and furniture they want to reflect hygge. The Danish term stands for an atmosphere of well-being, conviviality and comfort, which Nørregaard and his team convey to their guests with the last two renovations that have taken place at the restaurant. Kadeau collaborated with OeO Studio, an architecture and design firm driven by Japanese and Danish minimalism. During the first collaboration, Nørregaard and Thomas Lykke, the firm’s architect, worked arm in arm to design the spaces, while in the second, the chef gave the architect freedom. The goal of the second renovation was to «change the interior and ensure our guests could tell the difference». The space and the number of place settings available to customers were reduced to make the atmosphere welcoming. From the space obtained, a private-room including fourteen covers was added for parties and gatherings. A wine cellar, in view of the expansion of the wine list planned for 2021 was added. A greenhouse made of black raw-steel and glass, to enlarge the space dedicated to the lounge room, allows guests to appreciate a glass of wine before or after the meal. Nørregaard recalls the greenhouse he had the opportunity to live in with his mother as a child: «it is cold in Denmark in December for plants to grow and we haven’t planted yet. The goal is to have plants growing up to the ceiling in a controlled environment, to form a warm environment during the winter». In addition to the spaces created, attention was paid to the materials used. The kitchen is made of wood and the waiter stations are composed of Bornholm marble and wood, giving uniformity to the restaurant. To adorn the rooms, Nørregaard had the opportunity to collaborate with Danish artist, Farshad Farkanzia. The chef, an admirer of the latter, had the pleasure of exhibiting pieces from the artist’s private-collection which, in his opinion, corresponded with the design of the rooms.

The curiosity that Kadeau inspires in its guests begins at the entrance. Considering the restaurant, a home, Nørregaard decided not to use a door, as one would assume to push it open and walk in. Upon arriving at the Wildersgade 10B address, guests are faced with a brick-red door and a bell to ring. This, according to the chef, allows the staff to prepare for the entrance of their hosts, in order to accompany them with an explanation of the philosophy of the restaurant. Walking down the corridor, they find themselves immersed in the conviviality of the kitchen open to the dining room, giving a sense of hospitality.