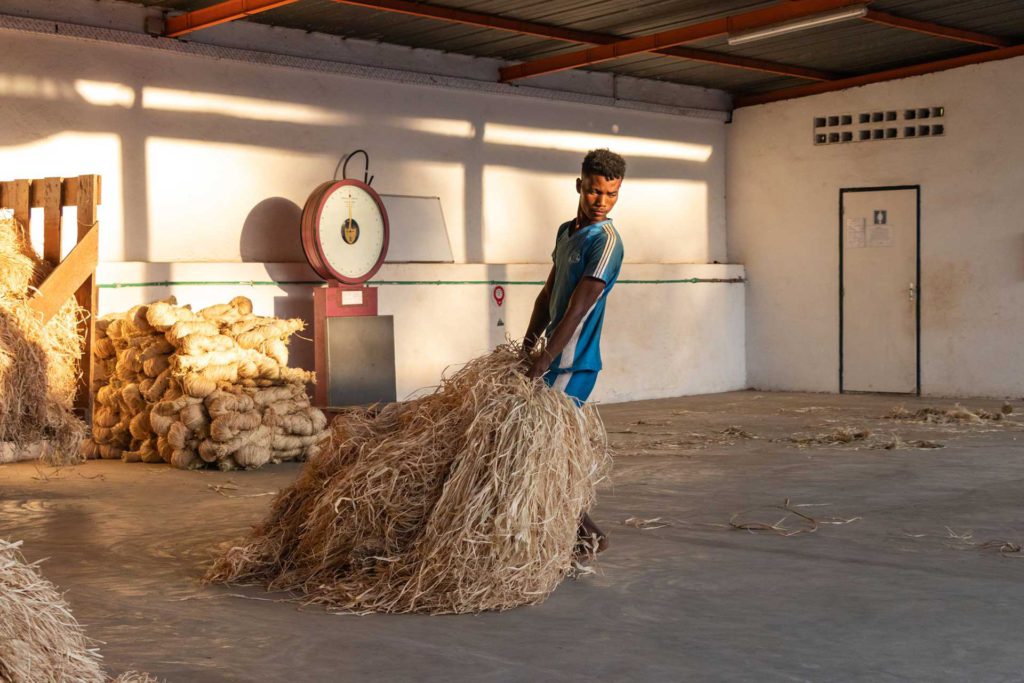 Development of the raffia supply chain, a material to be used in the fashion industry

From the humanitarian and social project to the development in terms of production attentive to the biodiversity of Madagascar, the case of Made For A Woman

The project to re-valorize raffia starts from Madagascar, the poorest land that offers richness in terms of biodiversity, both regarding flora and fauna. The founder of the project, Eileen Akbaraly, which has effectively become a brand, combined her interest in humanitarianism and her background in fashion to create a company that espouses both causes. The regions of Madagascar, and African regions in general, are historically known for their weaving centers and the wide range of fibers and dyes used in the production of textiles and costumes.

Raffia is part of Madagascan tradition and thus considered a very noble material which is why it is often used in ceremonies. During the entire process and after life, the cult of the dead in fact provide its use for the exhumation of the body seven years after death. This rite, called Famadihana, allows the reunion with family members following a specific ritual that covers the body with fabrics, such as a shroud and raffia. Because of this material’s relevance, Akbaraly explains she decided to employ raffia in her project.

Madagascar is one of the biggest exporters of raffia in the world so «for the project, I didn’t go to the local markets, because nothing is controlled there: you don’t know who they work with, if they pay the people who collect it, if they work with children, if the dyes are toxic». After extensive research, a business was chosen based on Akbaraly’s priorities. Kalfane Fils is found in the northwest of the country.  It collaborates with the government and the minister of the environment, has several certifications and is transparent about its operations.

The cultivation and procurement processes

Rafik Kalfane, CEO of the company supplying the raw material, says that the raffia trees begin to be productive after about five years from when it starts its life cycle. Akbaraly explains that raffia fiber is obtained from a palm tree that is technically called raphia farinifera and is a type of plantation found in tropical, humid climates such as in Africa, South America, the Philippines and Madagascar. Raffia trees only grow near major water sources and are characterized by long leaves that can reach up to eighteen feet, where each palm tree possesses nearly one hundred of these leaves.

During the harvesting process, these leaves are cut and torn by hand in lines parallel to each other with respect to the trunk of the tree. Only a young branch of the tree is cut; the entire tree remains intact, not chopped. Normally only two or three branches maximum are pruned per tree and per campaign, Kalfane specifies. Leaf collectors, gather the palms and brush them. From this, the fibers are obtained from manually harvested branches.

The following step involves drying them directly in the sun for twenty-four hours, taking on a natural raffia color which resembles beige. The producers specify that apart from the small head of the leaf, no part of the raffia is wasted. These fibers are then transferred to a warehouse, where they are sorted and separated with respect to their qualities: the color, texture, length and width of the fiber. From here it goes to another part of the company, where the fiber is packaged according to the buyer’s requirements, in braids or depending on the kilos in some kind of bales.

The raffia material, once collected and after passing the processes described above, does not need to be transformed into yarn, but can directly be used for the production of the final product. Akbaraly explains that there is no use of machinery in this process, but they use some second-hand machinery to implement raffia products with fabrics in particular designs or in the inner linings. The product is handmade, like the packaging and labels, by the company’s workers. Thread by thread, the raffia is worked thanks to the use of a crochet hook that also allows versatility in terms of manufacture.

«Different stitches of crochet weaves, macramé decorations, embroideries, long bangs and a texture that makes raffia almost similar to velvet: cut and combed for a soft effect, with a complex workmanship that sometimes requires men to work alongside the artisans, whose strength guarantees a perfect softness». Processing times can vary from two or three days for the simplest bags and up to three weeks for the most complex manufacturing.

No plastic is used in the production and ninety-nine percent of the products are made from raffia. Metallic elements are used for some products and bags are lined with fabrics that are sourced from local vintage markets. As for the material’s properties, raffia fiber has similar properties to jute, bamboo and hemp fibers. It naturally possesses great resistance with the potential to keep a product intact for ten to fifteen years at least, explains Akbaraly. In addition to accessories, it would be suitable for different market sectors, such as clothing and interior design.

The natural colors that raffia takes on are those already visible on the tree and range from light green to yellow, also considering the different textures based on the crop. As an alternative, vegetable colors are used which are on the lighter natural colors. These are derived from substances such as fruit. Akbaraly points out that stronger colors, such as fuchsia or dark blue, which cannot be created naturally, are produced with an AZO-free formulation.

These dyes are free of heavy metals such as nickel, cadmium, mercury, lead and chromium. They are ecological, free of toxic compounds and hypoallergenic, allowing for safety in the workplace and also for the people who use the products, as well as the environment. Seventy percent less water is used during the dyeing process than chemical dyes. Suppliers who address this aspect for Made For A Woman are certified by GOTS each year. The use of these colors also allows the entire product to naturally decompose as raffia is one hundred percent biodegradable.

Regardless of the social character that the project assumes, the use of this material for fashion production, specifically aiming at the luxury sector, would ensure viability of the entire product life cycle. From fair sourcing, to processing, to maintaining an adequate workplace, to manual production and disposal. In fact, most of the Made For A Woman company products are made from raffia and one percent is made from recycled fabrics for the linings and metal parts necessary for functionality. In this sense, it would be possible to implement a complete process of biodegradation, still not studied and analyzed by the company, eliminating excess waste.

Raffia material results one hundred percent compostable, and by eliminating the smallest metal and fabric parts and also the final products. This can also be feasible by implementing natural dyes which aren’t harmful to the environment or people, eliminating toxic elements and AZO-free dyes. Although the company was founded only recently and has not been able to calculate the use of resources in terms of energy and water. The suppliers use hydraulic and electric tools but are not quantifiable at the moment.

Production costs are high due to research into the material, which costs four times more than the black market, resulting in a corrupt country following an unfair supply chain, Akbaraly explains. In this project, every aspect of the value chain is controlled, from the collector to the producer, from the worker to the company. This, together with the choice of colors, provides a higher cost. The atelier also provides work to local women in difficulty, paying them above the living wage and offering training services, psychological and medical advice, medicine and food.

Replanting trees to give back what is being used

This type of work method means that the final product comes at a higher price than traditional raffia products. Although only the leaves of the palms are used, upscaling this production could damage Madagascar’s biodiversity. Therefore, the project also plans to replant trees to give back what is being used and what is being damaged by the unsustainable farming techniques of many local companies. A large amount of damage is caused by the extreme poverty of the country. This often leads citizens to choose earning money and maintaining their families over protecting the environment.

Only by adjusting the former can the latter be achieved. If raffia is produced in a correct and respectful way following all the steps listed above, it represents an ethical material capable of substituting itself. Its resistance can allow variety in the choices of products to be created. «Thanks to the study of this fair process, I was able to create the documentary, The Raffia Journey, in which everything was filmed from the growers and producers to the atelier and the production of the accessory. The documentary lasts ten minutes and we presented it during the week of the Cannes Film Festival for the Better World Fund section and aims to raise awareness of the raffia supply chain, which did not yet exist», states Akbaraly. Made For A Woman is also competing for the development of its project to obtain the trademark of the World Fair Trade Organization.

Made For A Woman

Born in 2019, founded by Eileen Akbaraly to support local communities in Madagascar on a humanitarian level, providing education, health and economic support, but also psychological; it is evolving towards the idea of a brand that uses traditional raw materials to create products with an innovative design.