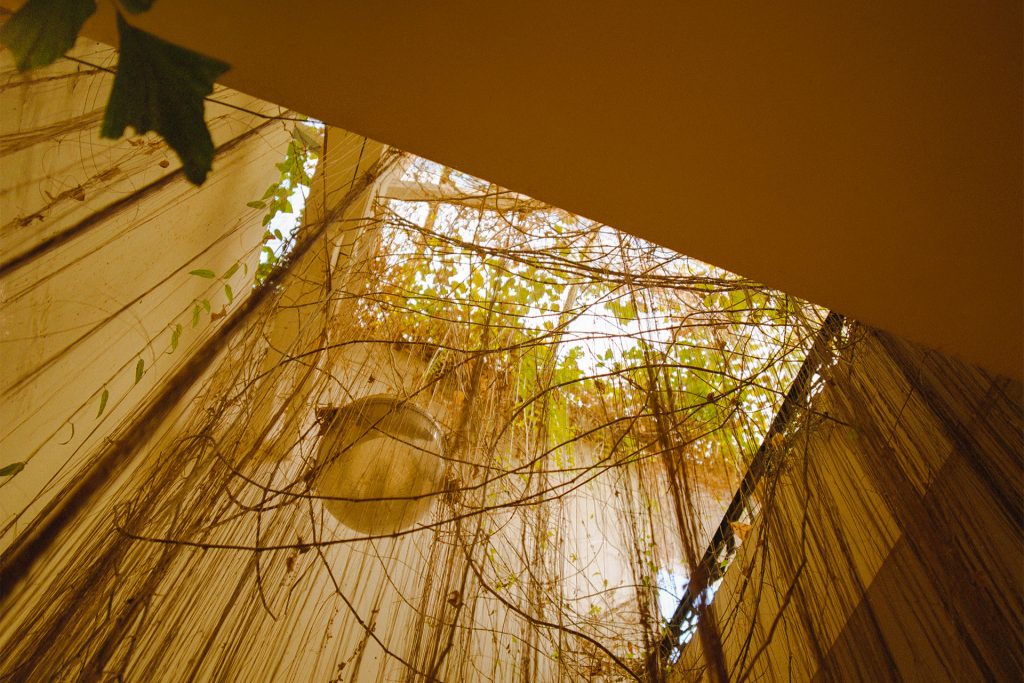 Patrick Blanc, Botanist and artist, has designed more than 300 Vertical Gardens around the world

Architects look for novel ways to infuse more green spaces into cities: The fact that a plant is rare in nature, doesn’t mean at all that it is difficult to grow

The disconnect between people and plants – Patrick Blanc

Though Blanc’s designs are complex and sometimes massive – he designed the world’s tallest vertical garden standing at 116 meters in Sydney’s skyline – he wants people to know that growing plants in vertical gardens isn’t as difficult as it seems. There’s a disconnect between people and plants, he says, but he’s optimistic that the divide can be bridged by conscientious and curious young people.

Sitting in front of his in-home vertical garden that’s fed by water from a large aquarium, Blanc dons a green floral shirt that nearly blends in with his lush backdrop of ferns, moss and other tropical plants that looks more like an island oasis than a home office in Paris. Even in a domestic setting. His garden is thirty-years old. Blanc graduated with a Ph.D. in Natural Sciences in 1979, focusing on plants that grow in the low-light levels of the rainforest understory, before beginning work at the Centre National de la Recherche Scientifique. His studies prepared him for growing plants in urban settings where light can be obscured as it is in tropical rainforests.

Back as a young teen, Blanc received a Christmas present that would influence his life’s work. Little information in French was available about aquariums at the time, so his first instruction manual came in the form of a gifted German magazine. «I could understand German, and learned how to remove excess minerals like nitrogen from the aquarium. It was good to have plants growing above the aquarium but with the roots in the water to extract all the excess minerals from the fish. After a while I could see of course that plants can grow without soil, the same as I saw at the exhibition when I was younger». From there, Blanc’s imagination sprouted. He fixed more plants above his aquarium on a board, feeding them water from the aquarium with a pump. Like this, Blanc crafted his first vertical garden on the wall of his childhood bedroom. Fifty years later, he says, pointing to the vertical wall behind him, he employs the same techniques in his installations.

Plants can grow out of the soil

As Blanc sees it, the awe that vertical gardens inspire stems from people’s inability to grasp that plants can and do grow on many different types of surfaces without the help of humans. Despite the everyday evidence of this, like a weed growing in the crack of a decaying concrete building, people have a difficult time fathoming it. «We learn we have to work on the soil to eat and to have food, so when we’re growing wheat and the most important plants to have sustainable life, we need high production, so we have to grow them in soil, but it’s  funny that many people think that plants need soil to grow in spite of the fact that they see them growing in many places without».

Horizontal rows of field crops are so ingrained into people’s minds that seeing plants growing vertically evokes an almost dream-like quality. «When people see my vertical gardens, when they see the plants, so many different shapes, so many different sizes, so many different species, they understand that yes plants can grow out of the soil, but because I install so many species, suddenly it becomes a dream, kind of like taking them back to Eden. As described in the Bible, the Garden of Eden was a paradise with plentiful food that grows effortlessly. Blanc sees a parallel between Eden and his vertical installations: Gardens can be both beautiful and low maintenance. «You don’t have to work hard to have plants growing next to you. With a vertical garden, you do not have to work – you can look at the plants growing by themselves». The plants are fed with water and nutrients, but there’s no soil to till.

Blanc’s work has focused on studying tropical plants in the low-light levels of the rainforest understory, but as his career in vertical garden design has progressed, he’s learned more about temperate plants, having worked in countries like China, Korea, Australia, and the United States. Every project is different and he never repeats the same design or uses the same plants owing to each location’s unique climate. By weaving together plants and other natural elements, Blanc’s designs help tell stories, like the one he is proposing for a cubic structure in a plaza near the Louvre Museum in Paris. «Since you have four sides, it would be interesting to represent all four cardinal directions, East, West, North, and South. You have four directions from the center of Paris. For each space, I want to make a story of going from Paris in all of the directions of the world, using plants and stones to tell the story of the landscape. It’s possible to have plants from the Drakensberg Mountains in South Africa inside of Paris».

When Blanc designed his first vertical garden for the public, he traveled to the island of Guadeloupe in the French Caribbean to collect plants for the installation. He completed the project at the Cité des Sciences et de l’Industrie in Paris in 1986, but vertical gardens wouldn’t gain notoriety until the mid-Nineties when gardening aficionados marveled at his work at a garden exhibition outside of Paris. «When you see something in a museum, it’s interesting, but it’s a museum, which means it’s not for everybody. But when I was invited to a garden exhibition, a garden is something everyone can have at home, or every city can have».

The wider public took notice of his work in the early 2000 after he teamed up with well-known French architect Jean Nouvel. «Architects are always interested in something new that works and that can last for a long time. Afterwards, of course you have the interest in the greening of the world, because the world is losing more and more natural habitat and forest, and people want to try to have more green things inside the cities».

Traveling to study plants and visit nurseries fuels Blanc’s inspiration. Just before the global lockdown due to COVID-19 outbreak, Blanc traveled to Guatemala and Belize to study native plants. Blanc visits local nurseries to establish relationships with the people growing the plants for his installations. He’s been spending most of his time at home now though, even tinkering with some traditional gardening. «Just in front of my house, I installed many plants around one single tree, using fifty different species. Many people did stop me and ask what is this tree and what is this flower, so yes, in some way people have been looking to nature more during these times».

Blanc is often drawn to plants that others don’t find interesting. That curiosity led to the discovery of a new begonia species, Begonia blancii, in 2011 on the island of Palawan in the Philippines. The plant is named after Blanc’s surname, which means white, even though its leaves are black. «I was very surprised when I saw it…it has very peculiar leaves for a begonia and at the beginning I didn’t think it could be a begonia because it had triangular leaves. You see, it’s the life of a botanist always to have surprises – the only important thing is to have the eyes open to see what seems strange».

Discovering and growing rare, endemic species is critical to preserving biodiversity. The world is home to nearly 400,000 known plant species, but less than ten percent have been assessed by the International Union for Conservation of Nature, so their abundance and stability is unknown. «When a species is developing, you never know if it will be useful to humans or not, such as for medication. Because they only grow in one place, they can be very easy to lose, but what’s important to know is that they can be very easy to propagate. The fact that a plant is rare in nature, doesn’t mean at all that it is difficult to grow».

Blanc asks what it means to introduce nature into cities, when humans destroy nature all over the world. «Now we are almost eight billion people, and we know that our impact on nature is bigger and bigger, and this kind of introduction is a kind of redemption. It’s a way of going back to Eden. Humans are only one species, while there are hundreds of thousands of plant species. Most people don’t even think about plants as different species and they don’t see the plant kingdom as having the same complexity as the animal kingdom. For Blanc, vegans optimize this outlook. They think plants aren’t living creatures in the same way that animals are. It makes no sense to me».

Looking to the future, Blanc hopes vertical gardens can help inspire people to care about plant conservation as much as they do about protecting animals. Beauty, Blanc believes, is key. «If you want people to be sensitive to conserving nature, first of all it has to be beautiful…I make vertical gardens beautiful with many species. The beauty of the plants and the way they go together. Once you see that it’s beautiful, and it surprises you, you can ask what it means and how you can help save it».

French botanist who works at the French National Centre for Scientific Research, where he specializes in plants from tropical forests. He is the modern innovator of the green wall, specifically, he invented the modern vertical hydroponics garden, which distinguishes it from its predecessors.