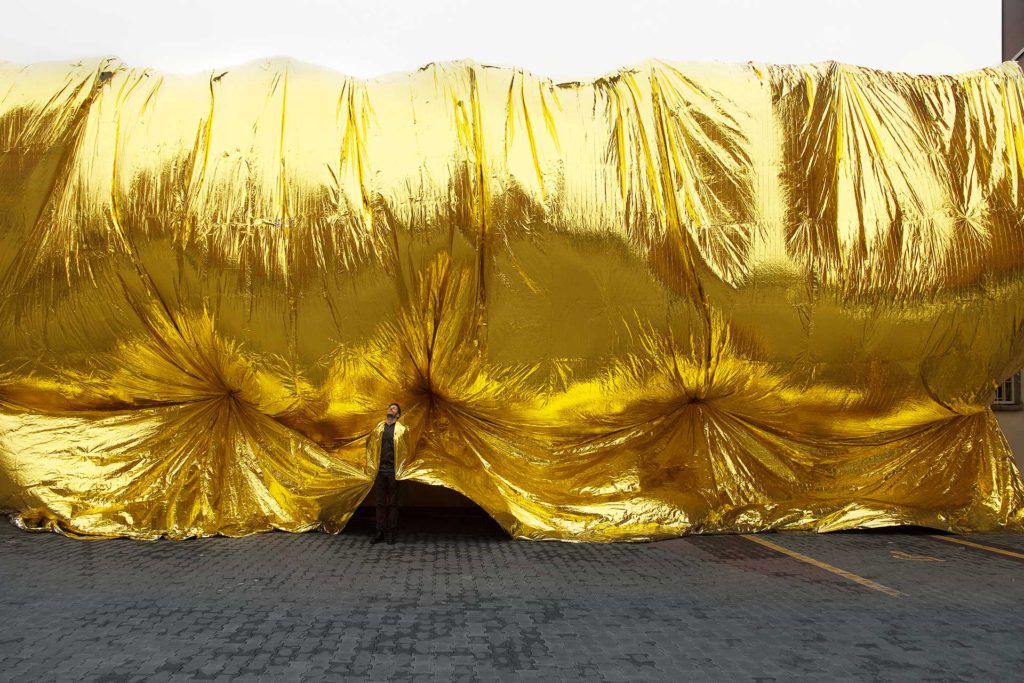 Microbiology and digital technology merge into the art of quantum physics

«One of the core values of a contemporary artist is fluidity: the ability of contaminating their work with video, photography, sculpture, science, without necessarily being just one thing» claims artist Giuseppe Lo Schiavo. In his work, Lo Schiavo likes opposing elements and pushing the observer to wonder about their perception of reality and the underlying relationships and tensions between things. The study of quantum physics made him realize that every element or event can be observed and experienced from several different points of view and that the perception of reality changes constantly according to the viewer.

It is no coincidence that the Metaphysical painting movement is one of his major influences. «In Metaphysical paintings you can easily find scientific references alongside classical elements, such as statues or architectural features». One of Lo Schiavo’s latest projects and first NFT artwork is titled Metafisica, a still life animation in 4k resolution. In this surreal digital space, the past and future of art meet and interact. A dog robot witnesses the destruction of the classic Greek statue of the Diskoforos, which in ancient Greece represented the perfect beauty and human figure standard. The sculpture was recreated from a real 3D scan of the statue part of the National Gallery of Denmark collection, while the original sound creation is by Roberto Musci, an Italian composer. The wrecking of the Greek statue recalls the negative reaction of the art world to the booming of crypto art and NFT. Lo Schiavo claims that digital and traditional art should not be perceived as opposite or contrasting elements, on the contrary digital tools, such as NFT and the blockchain technology, make both digital and physical art collection more efficient and safer for collectors and creators. The fact that privately owned digital artworks are still enjoyable for art enthusiasts and the general public is groundbreaking for Lo Schiavo, who finds this a democratic approach to art collection. Regarding the future of crypto art, Lo Schiavo believes that while the technology behind crypto art and NFT will evolve and upgrade over time, for example in order to meet sustainability standards and reduce their environmental footprint, the way art is sold, purchased and sometimes produced, has changed forever.

During his self-isolation months in London and the closure of galleries and exhibition spaces due to the Covid-19 pandemic outbreak, Lo Schiavo decided to take advantage of the new opportunities provided to artists by digital technology and put in place a virtual exhibition which could be accessible to everyone, everywhere without space or time constraints. Social Organism hosts three installations, Streptohumans, Oxygen is toxic and Collection point, each of which gives expression to contemporaneous social issues. The installations were created with a 3D design software and subsequently converted thanks to a virtual reality application, Shapespark. In Social Organism human urbanization and bacterial colonization are put in comparison; «The pandemic has taught us that the advantages of social organizations are vital, while individualism is a threat for an overpopulated society». The first installation, Streptohumans, is inspired by the formation of bacterial biofilm, but instead of bacteria Lo Schiavo used human bodies to create a collective structure in which individuals must collaborate and join forces to enhance living condition. Oxygen is toxic is a virtual space where the viewers can easily lose their sense of direction and get lost among rod-shaped bacteria. This installation is inspired by the Great Oxygenation Event, occurring around 2.35 billion years ago, when a special type of organisms, cyanobacteria, learned how to get energy from the sun and produce oxygen as a waste product causing the mass extinction of all the anaerobic species. This geological event shows how climate changes and new living conditions might mark the end of humanity and other living species, but not necessarily the end of the world. Natural elements are core subjects of Lo Schiavo’s projects, such as Emergency blanket and Wind sculptures.  As an artist, he feels the duty to raise awareness on environmental issues and invite people to reflect on their role in such a fragile and complex ecosystem. The subject of the third and last installation, Collection point, is an open mouth which collects and absorbs the waste liquid of society, urine, which is transported by an intricate pipe system. Collection point is inspired by a scene Lo Schiavo witnessed in first person in a London club: a guy lying in a bathtub was absorbing through a funnel connected to the bathroom discharges all the urine and waste liquid coming from the urinals located on the other side of the wall. That scene, a sort of fetishistic ritual, pushed Lo Schiavo to wonder about standard sadomasochistic ideas such as power, humiliation, and arousal.

His interest in evolutionary biology is a recurring theme in most of his recent artistic production. Working as an artist in residence at the microbiology lab of UCL medical school, Lo Schiavo is currently studying bacterial cultures and bacteria contamination. His fascination with science and biology dates back to his school years and over time he learned how to see and explore humanity from an objective point of view. His scientific approach allowed him to discover bizarre and apparently futile behaviors and convictions rooted in the human nature. At UCL medical school Lo Schiavo, putting in comparison human activity and urban expansion with bacterial contamination and colonization, investigates how the anthropogenic modification alters the landscape. Organizational structures, whether they be cities or colonies of bacteria, allow living beings to proliferate and their proliferation inevitably leaves traces on the surface. Recently, Lo Schiavo merged photography and his latest laboratory studies in a new project in which he let a Serratia Mercescens bacteria contaminate photos and alter their appearance. This bacterium is an object of study not only for its beneficial properties, but also because of its alleged involvement in a historic event of great value to Catholics known by the name of Eucharistic Miracle of Bolsena, which took place in 1263 in the Italian town of Bolsena and inspired the recent work of Lo Schiavo. During the celebration of Mass, just before the Eucharistic, the Host bled. Some researchers tried to explain this event with the presence of the Serratia Mercescens bacteria which in warm and humid environments produces a bright red slightly viscous pigment called ‘prodigiosin’, easily exchangeable with fresh blood.

Because of his multidisciplinary approach, Lo Schiavo advocates for collaboration between artists, researchers, scientists, and other experts in order to bring to the table the varied issues and themes concerning society, environment and the future of humanity. His latest artwork, Chimera, was inspired by a recent paper published on Cell Magazine based on a Chinese experiment which consists in creating the first hybrid embryo with human and monkey DNA. In the future, this hybrid species could be exploited for medical and scientific purposes. Using machine learning, Lo Schiavo tried to develop a neural bridge between the two species. The artificial intelligence software, trained with an equal number of pictures of monkeys and humans, generated images of a hybrid species with both human and monkey features, which push the viewer to question the ethical and moral implications of such procedures.

Italian multidisciplinary artist working with photography, virtual reality and infrared systems, among others. He is currently an artist in residence at the University of UCL in London in the microbiology lab of their medical school where he is studying bacterial cultures and bacteria contamination. Lo Schiavo’s works have been exhibited in international galleries and museums such as Saatchi Gallery in London, Aperture Foundation in New York, Museo Marca di Catanzaro, LACDA in Los Angeles, and have been published on established art magazines such as Exibart, Wall Street International, Artribune and Vice.