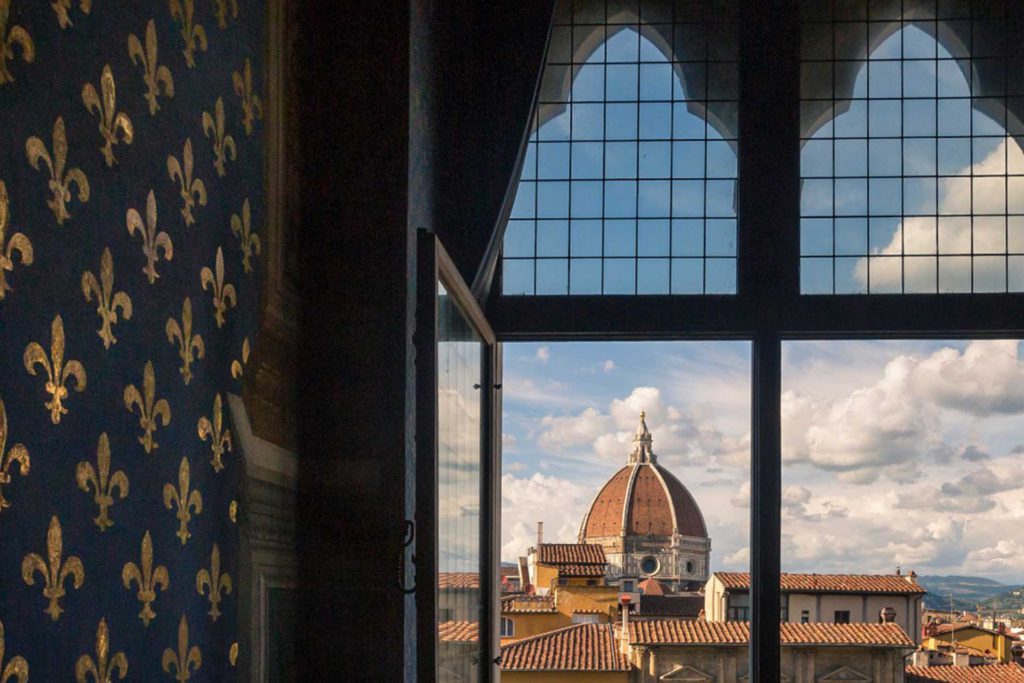 Segments of the villa were brought back to life: «The architects worked very closely with the artisans – they wanted to bring the building as close as possible to what it originally was»

Nestled in the Santa Maria Novella neighborhood, Dimora Palanca, Florence is located on Via della Scala, which in the past, as Rachelle Belladini explains, «was considered as one of the arteries of Florence. Because it would link the center of the city to the countryside». It was built by the Palanca family – a noble household from Orbetello in Maremma – between 1865-71. After the Palanca family, the villa was briefly inhabited by the Bàrbera family, nobles from the Piedmont region, and was then passed on to the architect Raffaello Brizzi, a leading figure of the Florentine cultural heritage.

In the past, ancient kitchens of noble homes were utilized for social events. It was around this time, the villa first forged into hospitality by hosting fashion design workshops. A place where artisanal creations were produced for the delight of the Florentine bourgeoisie over the years. Centuries later Dimora Palanca reincarnated as a five-star luxury property in August 2021. «Before that, it existed as a bread and breakfast. Nobody bothered putting much effort into it, and it wasn’t refurbished as it has been done now», states Belladini.

Dimora’s rebirth was envisioned – by two medical professionals from Naples – as a passion project. «The owners have always been fond of architecture as a form of art. Throughout his life he bought different ancient villas and city palaces and had them refurbished».

The restored nineteenth-century villa is spread across sixteen hundred square meters – featuring nineteen rooms, a lounge, dining space, gardens, and a restaurant. The renovation and redecoration of Dimora Palanca were orchestrated by Tuscan architect, Stefano Bibiani. As you enter the lobby from Via Della Scala, on the left lies the living room, and on the right, there is the music room. «The name music room was coined as a way to pay homage to the musical symbols and instruments painted on the original frescoes in the room. This was one of the things highlighted during the refurbishment», explains Belladini. Breakfast every day is served at the lounge which has access to the garden and the bar. The ancient staircase takes you to the rooms on the noble and first floor.

Through attention to detail, segments of the villa were brought back to life. Ceiling frescoes, stuccoes, parquet floors, columns on the first floor, marble of the staircases, and the wrought iron handrails, to name a few. «The architects worked very closely with the artisans – they wanted to bring the building as close as possible to what it originally was». In some parts of the villa, the wall texture appears to be like a meringue pie due to the decorative coating underneath, established by the stuccos. «It is white, airy, soft and feminine», adds Belladini.

The hotel offers a choice of rooms and suites. The eighteen bedrooms feature a neutral palette of warm shades: ivory, cream, cool whites contrasted by darker hues of graphite and charcoal. Some have their private balconies overlooking the gardens, while others provide glimpses of Florence’s medieval center and the Duomo. «The master suite is special–it is adorned with frescoes». Bathrooms come equipped with either chromotherapy showers (a therapy based on the healing benefits of color, which aims to create a more positive state of mind) or whirlpool bathtubs.

The classical architecture blends harmoniously with the contemporary decor at this library-style villa – showcasing a juxtaposition of the old and the new. «Because we did not have the ancient furniture – and the designer don’t want any copies; he decided to go the opposite way and opted for modern furnishings. Maxalto, B&B Italia, Flos are some of the Italian brands you’ll find at the hotel». The villa’s secret garden is an oasis of tranquility in the heart of Florence. Vast French doors open onto a manicured garden, flooding the interior with sunlight.

Dimora Palanca encapsulates Italy’s renaissance capital. «The restorative journey carried out by the architect was not just limited to redefining the spaces, its objective was also to return to the city an important fragment from a time when it was the capital of the Kingdom of Italy».

The 19th century saw the villa in the ownership of avid art collectors, acquiring the reputation in the city of being a hub of artistic activity, society events, and sometimes a private gallery. «The Palanca’s were art patrons they would sponsor all the artists going through Florence and host them at their home».

An art experience hotel – Dimora Palanca has been a meeting point for cosmopolitan travelers and art lovers since the 1800s. It was a matter of pride for the noble families, who lived along the walls, to organize cultural events in their living rooms, at that time. They received painters, musicians, and poets who cheered their evenings in exchange for hospitality, in the name of nineteenth-century patronage.

Dimora Palanca asserts its artistic presence even today. This link to the art world continues through artist Paolo Dovichi’s forty beguiling pieces that accompany you across the villa. «These are unique artworks that come in different sizes – from larger paintings in the living room to smaller ones to fit the rooms. If you fancy the painting in your room, you can buy it – like a permanent exhibition of his artworks», explains Belladini

The heart of the restaurant lies in its ancient kitchen. Inspired by a culinary journey, Chef Giovanni Cerroni’s research unites experiences and emotions. His creations pay homage to the ancient Florentine kitchen by focusing on Mediterranean flavors and Tuscan ingredients. His dishes bridge the past to the future – by transforming traditional recipes into contemporary plates – with international influences. Mimesi’s five-course tasting menu starts with a course of six amuse-bouche ranging from quail egg with capers to a “chocolate” of ceviche. Signature dishes from the a la carte include a mellifluous salad of marinated anchovies; smoked oyster and shiso risotto; foie gras, chocolate, and raspberry.

The chef had previously worked with the general manager of the villa on another project, and «she decided to get him on board», Belladini tells us. The restaurant is open for both resident and walk-in guests. Gastronomic experiences offered at Dimora Palanca include the Chianti wine tour and wine & olive oil tasting. The villa is home to the cocktail bar: Il Bistrot.

The highlight of the square – Santa Maria Novella, is a 400-year-old perfumery. During the early renaissance time, Dominican monks would cultivate and harvest medicinal herbs and flowers – to make tinctures as remedies. These plant medicine potions were sold at the Santa Maria Novella Church, giving birth to the apothecary.

Dimora Palanca is conveniently placed for those wishing to explore Florence on foot. The five-starred boutique villa stands a few steps away from famous Florentine monuments. Including the Basilica of Santa Maria Novella, the Cathedral of Santa Maria del Fiore, and the Accademia Gallery. Between the hotel and the church lie the renaissance gardens – Artico Luchalari and Giardino Corsini. Further, the district is home to Via dei Fossi – a street populated with antique shops and curios. The streets are punctuated with small shops, artisanal brands, and homegrown labels.