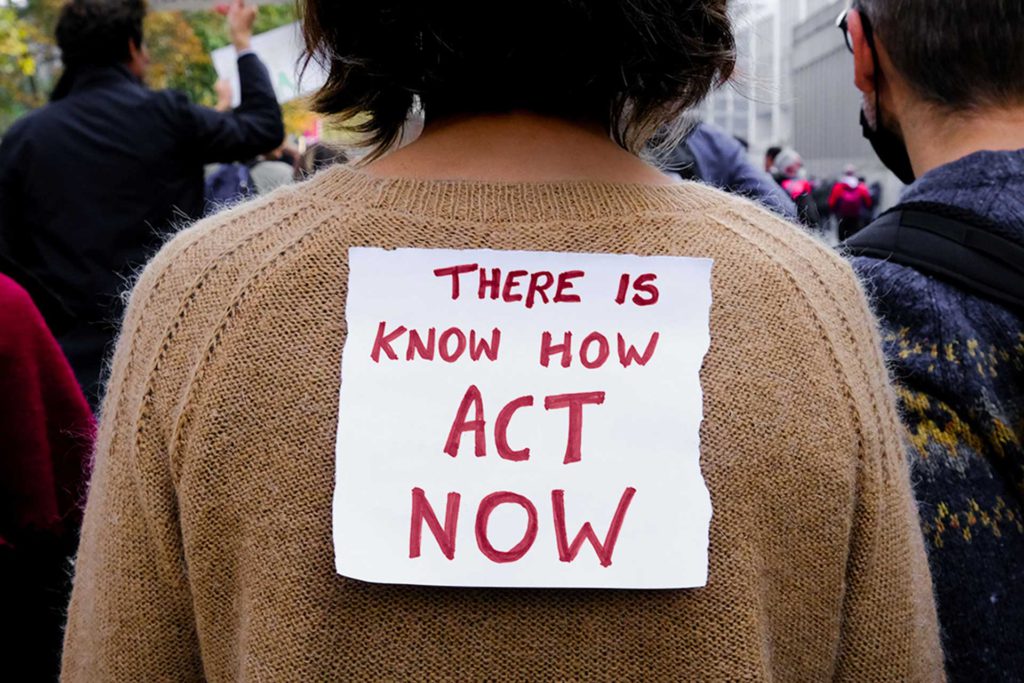 Oway – «Don’t Black Out The Future»: a manifesto against wasteful design and consumer habits

Black Friday: what is it

Black Friday has slowly infiltrated the market, both off and online around the world, and has now become synonymous with erratic shopping, discounts and the beginning of the Christmas preparation frenzy. Contemporarily, Black Friday has demonstrated man’s fears of disorganization prior the holiday period, the need to satisfy the addictive nature of senseless purchases and adding to a never-ending consumerist lifestyle. Many brands aim to cash in from participating and marketing their discounts during Black Friday.

This can continue into Cyber Monday, creating Black Weekend, and even in some cases evolving into a full Black Week. As the initiative presents itself the day after the American holiday of Thanksgiving, Black Friday signals the official starting date for Christmas preparations. For this reason, countless companies and brands, not only in America, push to promote their sales as a method of creating end-of-year profits. The term Black Friday dates back to the early 1930s when large department stores, such as Macy’s, would launch their holiday sales. Initially, it was used to describe both the increase in traffic on the day after Thanksgiving, justifying companies writing their sales in black ink and avoiding being in the red after a prosperous day.

As the initiative commercializes on the sale of goods in a short period of time, in some cases only twenty four hours, there is increased pressure to make the most of the discounts on offer, which leads to unnecessary purchases and therefore waste. Man’s consumer habits are a key aspect of continuing and feeding into an existing linear economy. This increases profits for those who capitalize on the consumer buying the latest edition or desiring to keep up with fashion trends, throwing away goods and choosing to purchase new instead of reusing, recycling or repairing.

Eighty percent of purchases made during Black Friday promotions, including the packaging, will either end up in landfill, incinerators, or low quality recycling, according to a report by the independent think tank and charity, Green Alliance. This report was made in partnership with the Resource Recovery from the Waste program in November 2019 and outlines the need for the «strategic planning of new infrastructure … to ensure the development of an economy which minimizes resource use and waste, by lowering demand for new goods, through reuse, repurposing and the remanufacture of products».

It is a popular event in the American calendar. Adobe Analytics reported that online sales reached $9 billion during Black Friday sales in 2020, a twenty-two percent increase on the previous year. The most popular items, according to PI Datametrics, which were researched and purchased in 2018, were all tech products, the number one being Nintendo Switch, followed by Xbox One and Fitbit. These products are especially damaging to the environment because of the primary materials and resources needed for their production.

The trend of intense short-lived discounts

Modern gadgets usually have a short lifespan due to their fragile nature and sometimes it can be cheaper and easier to buy a new model instead of attempting to fix a problem. Furthermore, the idea of Black Friday has seeped into the summer months with the introduction of Prime Day by Amazon in 2015, where it is possible to find low prices on thousands of goods for a short period of time. In 2020, following the economic downturn due to the impact of the Covid-19 pandemic, Prime Day went ahead from October 13th to the 14th, boosting sales worth $3.5 billion. The trend of these intense short-lived discounts does not seem to be slowing down as consumers are led to believe that they are saving money and that these products are essential. With each purchase, the consumer moves away from low waste potential.

As a society used to convenience and guilt-free wasteful actions, Black Friday encourages these habits and continues to make profits off of the lack of wanting to change, even when the climate crisis is evident. According to data by OECD (Organisation for Economic Co-operation and Development), a measly eighteen percent of the world’s plastic is recycled. The rest is either burnt in incinerators, left in landfills or ends up in the ocean, continuing to pollute the natural environment.

This man-made material, which takes hundreds of years to decompose, requires imminent action to not only slow down its production but also move away from its daily use, especially single-use plastics. With estimates of 8.3 billion tonnes of plastic having been produced since the fifties, of which ninety-nine percent is manufactured from chemicals derived from non-renewable resources – oil, natural gas and coal – drastic change needs to be implemented yesterday. Plastic and microplastics have become an integral part of daily life, fusing into the geological layers of the earth contributing to the arrival of the Anthropocene; the proposed new geological era in which we are currently living, where the impact of man is evident and irreversible on the planet’s geology and ecosystems.

Oway, or Organic Way, an Italian sustainable Agricosmetics and lifestyle brand, decided to move in the opposite direction in response to the annual reappearance of this year’s Black Friday. Oway closed their flagship stores in Bologna, Amsterdam and all online e-commerce on Friday 26th November, highlighting their campaign Don’t Black Out The Future. The symbolic act of closing down the stores and blacking out the website on a profitable day aimed to reiterate the need for conscious decision-making when it comes to consumer habits.

An invitation to take part in not only a more conscious Black Friday but also with lifestyle and consumer changes; this year, the brand has four main takeaway messages from their latest campaign. Firstly, plastic is never sustainable from its production to its afterlife, therefore choose other materials; secondly, Oway highlights the decision to purchase concentrated goods, which use smaller dosages; thirdly, be aware of the unnecessary packaging that often comes with a product, aim for more substance; and finally, be aware of the ingredients and formulas which are used within the product, a reminder that these products are used on our bodies, our hair and our skin.

Each suggestion is followed by the action already taken by Oway to take on that problem and how you can also corroborate. The brand focuses on the normalization of a circular economy; a model of production and consumption, which over the product’s lifetime, the object is shared, reused, repaired, refurbished and recycled. If said object cannot continue and re-enter this cycle, it is then disposed of responsibly. Oway demonstrates the realistic ability to create a circular system within their business, aiming for this circular economy to reach the consumer.

A circular economy requires better designs, logistics and infrastructures, which support the promotion and continuation of reuse and repair. Additionally, it requires the systemic change of wasteful habits and attitudes en masse. Since 2013, Oway has done away with the majority of the plastic in its production, aiming to become completely plastic-free, prioritizing instead the use of glass and aluminium for its containers. The two materials are easy to recycle numerous times. Plastic, on the other hand, can only be recycled a maximum of two times into new plastic products before losing its durability due to the breakdown of polymers.

Oway’s manifesto centers around a circular ecosystem within their production, marketing and distribution, priding themselves as a Carbon Neutral Company. Yet, they are aware that their dedication to a sustainable system can only go so far; the consumer at the end of the line must be actively involved and aim to have similar values to the brand’s message and ethics. To bring the consumers closer to the responsibilities of a sustainable society, the Oway website promotes a Bio glossary to render certain terms accessible, such as biodynamic active ingredients or without SLS/SLES. As a brand that not only aims to lead by example, with the curated selection of locally grown ingredients for each product, they also have the objective to educate and expect more from its users.

The brand takes responsibility for each step, from the ingredients cultivated in the biodynamic method, without the use of pesticides or chemicals, to the carefully designed containers, and to the moment the products are transported to the salons and shops. Oway demonstrates that it is possible to achieve sustainable results, and therefore why can’t other companies and brands do the same and make similar commitments? In the words of Oway for this year’s Black Friday: «Don’t consume the future, consume responsibly».

Oway is a lifestyle brand that was launched in 2005 in Bologna, Italy. Evolving from a family business with origins dating back to 1948, the beauty brand has continued to grow and create its own identity in the field of biodynamic formulas. Oway specializes in sustainable Agricosmetics treatments as well as lifestyle products for professional salon and personal use.