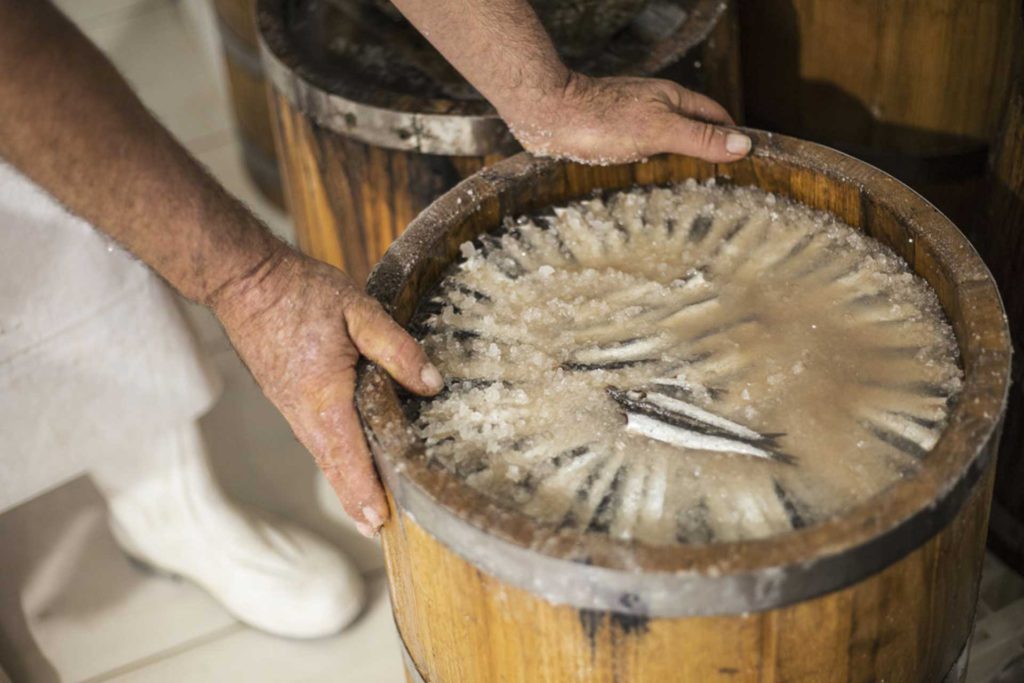 Why removing baby tunas from the ecosystem is damaging, and what can be done to protect their reproductive cycle in a more efficient way

The ocean hosts many species of tuna, but the most sought after is the bluefin – the expensive, red kind you find in sushi restaurants on nigiris. Atlantic Bluefin tuna is at the top of the food chain and has few natural predators, such as killer whales and sharks, allowing it to live up to forty years. Due to its long lifespan, this species of tuna reaches sexual maturity between five to eight years old and follows two distinct migratory paths: while the western population spawn in the Gulf of Mexico, the eastern population reproduces in the protected waters of the Mediterranean. Although the bluefin has a long-life expectancy and few natural predators, it is being pushed to the brink of extinction due to overfishing. This species of tuna is not just good to eat, it is also expensive, allowing those who capture it to make good earnings.

As with many marine species, bluefin tuna lays its eggs once a year and typically returns to their birthplace to do so. Because of their habitual passage through the Mediterranean, tuna fishing has become an engrained practice in many coastal communities, which await their arrival each year. The season starts with the first passing of large reproductive bluefin, weighing up to 600kg, who swim through the Strait of Gibraltar, passing along Spain and across the west coast of Italy. Some migrate further towards Greece, but these numbers have been declining as few actually make it past the Italian coast each year due to aggressive fishing.

After spawning, which typically takes place between May and June, the juveniles grow in the protected waters of the Mediterranean before migrating back to the Atlantic towards the end of September throughout October. Because the waters of the Mediterranean are their breeding ground, it is key to regulate this environment making it as hospitable as possible. However, it is exactly during these months that tuna fishing is allowed in Italy, from June to October, which negatively impacts the numbers of bluefin which will be able to reproduce the next year.

The categories of Bluefin tuna fishing

Bluefin tuna fishing is divided into three categories: industrial, traditional and amateurish. Illegal industrial or traditional fishing has to do with the quantities of captured tuna as both of these methods are regulated by strict quotas. These are often exceeded as professional fishermen catch more than they are allowed to and illegally sell the surplus. Of course, their catch must also meet a minimum size, but this is often overlooked due to their use of nets, which makes the size of the fish caught almost impossible to supervise.

Amateurs, on the other hand, are regulated by both size and number: in Italy, the law states that anyone is allowed to capture one tuna per fishing trip, and that it must be over 30kg or 115cm long. This is even more difficult to regulate as Italy is a peninsula dotted with coastal communities all over who enjoy capturing tuna. Some consume it themselves while others illegally sell them to restaurants or fish-markets. The sheer number of amateur fishermen means it is impossible to properly enforce these laws and maintain their supervision.

Italian tradition and culture are highly interlaced with the sea and its tides. On the Coast of Amalfi, once one of the four great Maritime Republics, people still live in synergy with the sea and await the annual passage of bluefin. While Sicily and Sardinia are famous hotspots for tuna capture between the months of May and June where traditional Tonnara fishing is carried out, the Amalfi Coast focuses on the return passage of juvenile tuna on their way back to the Atlantic between September and October. A thirty-one year-old inhabitant from Scala who wishes to stay anonymous says: «The first time I went fishing for tonacchie, baby tuna, I was just a boy; I went with my father. I don’t go so often anymore, but at least once a year I go fishing for tonnacchie. I do it because I want to experience the strong emotions that tuna fishing on the Amalfi Coast provides. Many people go fishing, actually everyone wants to go».

This man is an amateur and not a professional fisherman, and has captured a total of fifteen juvenile tuna this year. His father also separately captures some, and together they clean them and put them in oil so it lasts all year round. Not everyone is so conscientious: «I have heard of people who capture up to 600 juveniles in one go. They sell them mostly to other individuals. Some restaurants buy it, but you will never see it on the menu because it is illegal, you can’t catch tuna like this, there are tuna quotas and anyway these are too small to fit into the quotas».

This man is young, and understands that protected species must be regulated: although he captures tuna for himself and his family, he does not engage in illegal commerce. It is a different story for older generations. An eighty year-old fisherman from Maiori says: «This is one of the most exhilarating and fun types of fishing. When I go fishing for tonnacchie I use a small and fast boat because this kind of fishing is illegal, and I need a fast engine to avoid police. When I go fishing for tonnacchie I aim to get about fifty each time and I hide them on board in a secret compartment of my boat so when the police or the coastal guard come to check, they don’t find anything».

When asked if he thought juvenile tuna fishing was problematic due to their dwindling numbers, the fisherman answered:«Not at all, there are so many of them. If you sail down from Capri to Maiori you can smell their fishy stench because of how many there are. And nobody goes fishing for them». These opinions demonstrate the generational differences in terms of environmental awareness. The eighty year-old man is a professional fisherman and subject to heavy checks upon his return in port, which is why he built the secret compartment to stash his illegal catch. While amateurs are legally allowed to capture one tuna per day, fishermen who were not allocated any quotas are forbidden from any tuna capture at all.

A fifty year-old professional fisherman from Maiori explains further: «The problem isn’t professional fishermen; the problem are amateurs because for each professional fisherman there are one hundred amateurs. Today, from this port already ten boats have left harbour and they are all going tuna fishing. As a professional fisherman, I am not allowed to capture a single tuna or my licence will be revoked. Each amateur captures forty or fifty baby tunas which weigh from one to two kg. Once they get back on land, they sell them while I have made nothing. This is a big problem. They should make laws that regulate amateur fishing because a lot of these amateurs use tuna fishing as a side job. This is because if they get caught, the law does not take away their boat, it does not take away their licence. All it does is fine them, but they are young and don’t pay the fine. When I go out with my professional fishing boat, the police come to check me regularly but they don’t check the one hundred amateur boats fishing for tuna».

On the Amalfi Coast, most inhabitants have a boat, which means that on a good day there can be hundreds of amateur fishermen at sea. There are simply not enough coastal guards and police boats to control a coastline with such strong marine traditions, and those practicing illegal fishing are careful not to get caught. «As you’re fishing, you have to check that nobody comes up from behind — the coastal guard can zoom up in a second, so you have to check constantly. As you catch the fish, you hide them in a bag underwater tied to a rope. You put a rock in the bag so if a police boat comes near you cut the rope and it sinks to the bottom. It’s also difficult to get them back ashore. Some people hide them in caves or beaches and come back for them later via land».

A cyclical approach to fishing

While industrial and traditional fishing are causing bluefin numbers to plummet, the practice of capturing juveniles is just as harmful as it disrupts reproductive patterns from the bottom-up, removing tunas that will never reach maturity. Industrial fishing is known for its marine malpractices such as bottom trawling, overfishing, and not respecting sea-laws; however, damage wrecked by amateurs is often overlooked. This is reflected in the legislation that regulates them in Italy and the minimal checks by part of the coastal guard. Furthermore, quotas do not seem like the best way to regulate the survival of an endangered species, due to the difficulty in monitoring illegal captures and whether assigned quotas are even adhered to in the first place.

A better practice could be based on a cyclical approach to tuna fishing, in which nations that witness the passing of bluefin along their coastlines, such as Italy, refrain from capturing it during even years. During these years, no restaurants will be allowed to sell dishes which feature tuna, and the possession of bluefin tuna flesh will be heavily fined. On odd years, tuna fishing will be allowed as usual, with its usual regulations, quotas and size restrictions.

This will allow for coastal communities to continue to engage in their traditional practices, albeit with less frequency. Although people would still be able to fish illegally, less of them would capture excessive numbers with the aim of profiting, and industrial fishing would simply be suspended — something which could be possible thanks to government and European subsidies. This cyclical approach would allow the eastern population of bluefin tuna to breed in peace once every two years, hopefully helping to increase their numbers in the future.

Bluefin are the largest tunas and can live up to 40 years. They migrate across all oceans and can dive deeper than 3,000 feet. Bluefin tuna are made for speed: built like torpedoes, have retractable fins and their eyes are set flush to their body. They are tremendous predators from the moment they hatch, seeking out schools of fish like herring, mackerel, and even eels. They hunt by sight and have the sharpest vision of any bony fish.