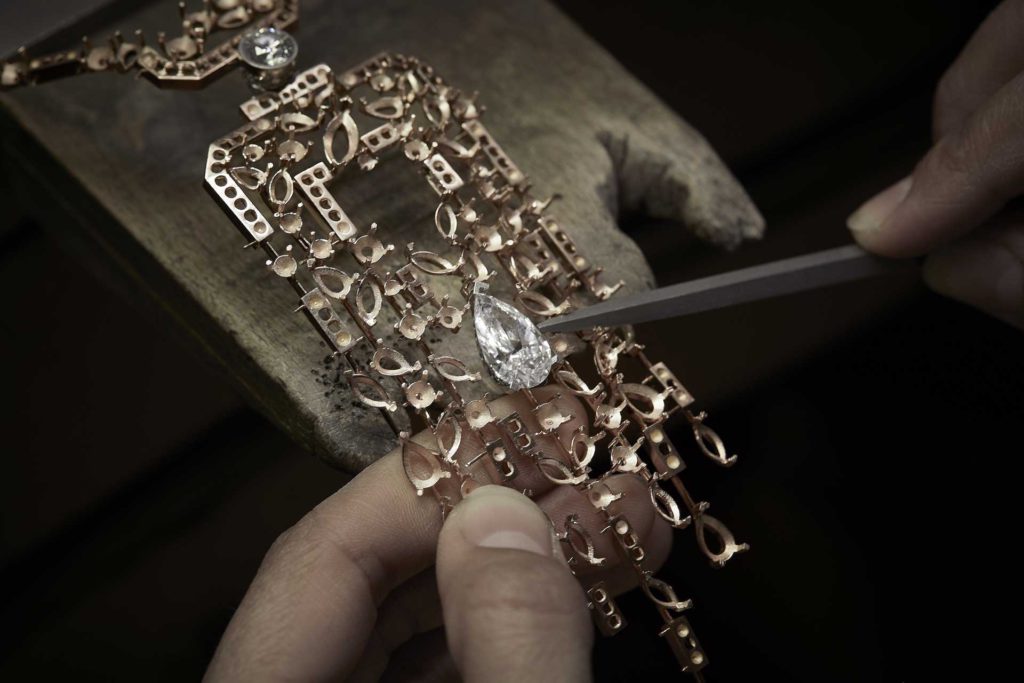 A 55.55 carat diamond: the 100th anniversary of N°5 Chanel talking with Patrice Leguéreau

The Director of Chanel’s Fine Jewelry Creation Studio describes the journey that led him to Collection N°5 Grasse, its jasmine and May rose fields, and the pink, red and yellow tones of the Mediterranean

A brushstroke, created from a brush dipped into Indian ink, was the starting point from which Patrice Leguéreau, Director of the Chanel Fine Jewelry Creation Studio, drew several number fives on separate paper sheets. «On a large format», he adds, «as this collection was calling for scale and grandeur». His intention was to let the outlines of the number guide his hand in order to grasp the essence of the digit – at that stage, shying away from any connection to the world of jewelry. The outcome became the motif template for a collection celebrating the 100th anniversary of Chanel N°5 perfume. It is Collection N°5, and its pièce de résistance is the 55.55 necklace adorned with a 55.55-carat D color Flawless Type IIa custom-cut diamond.

Leguéreau insists that the central stone had to have a special cut: not a simple emerald cut, but an elongated version that would replicate the bottle’s stopper shape. It was made possible by acquiring and working on a 170-carat rough diamond, from which lapidaries could cut the perfect shape and ideal size of 55.55 carats. «At the bottom of the bottle, pear-shaped diamonds represent drops of perfume, and they are suspended using the fil couteau technique (threads of gold)», Leguéreau explains. Some additional diamonds have been cut-to-size to fit the design. Tapered baguettes form the stopper and the angles of the bottle silhouette, while strands of bezel-set round diamonds hint at the art of baudruchage: the hand-sealing of the neck of the perfume bottle’s stopper, which is held in place with two rows of cotton thread and secured with a wax stamp bearing the double C. «For its quality in terms of gemstones and craftsmanship, the 55.55 necklace epitomizes the homage to N°5 all by itself», Leguéreau affirms. «I imagined one masterpiece centered around one gemstone that would mark this milestone – the first collection dedicated to a perfume».

The debut of aldehydes in perfumery

Gabrielle Chanel had held the number five as a symbol of purity ever since her time spent at the Aubazine orphanage. Over six years, it was there that she would walk along paved routes towards the Cistercian abbey to perform her daily prayers. The stones in these pathways were grouped in fives. Years later – a story that everyone knows by now – working with Russian-born French perfumer Ernest Beaux on creating her first perfume, she elected one sample as her favorite, one that happened to be numbered five out of the ten that the perfumer had presented to her. The perfume had found its name, and it marked the debut of aldehydes in perfumery. «The man who created N°5, Ernest Beaux, had been experimenting with aldehydes before he met Gabrielle Chanel in 1920. In 1919 he had travelled beyond the Arctic Circle, where he recalled that the midnight sun, lakes and rivers were exuding extreme fresh- ness, something he wanted to encapsulate in N°5 by using an increased aldehyde amount than usual», journalists Olivier R.P. David and Jeanne Doré explain in their article about aldehydes.

By letting his imagination flow, Leguéreau steps into Gabrielle Chanel’s modus operandi. «I strive to inject an artistic impulse into the infancy of each project, as opposed to just drawing jewels next to each other. Starting off with a creative urge is what drives me, and it’s identical to how Gabrielle Chanel used to translate a concept into as much artworks as luxury items», he says. Some high jewelry collections see him travel to the geographical sources of inspiration, his sketchbook in hand. Scotland and the ninety-seven-mile River Tweed for the Tweed de Chanel high jewelry collection; the city of Venice, its lagoons and palaces for Escale à Venice; and for Collection N°5, Grasse, whose jasmine and May rose fields supply the core ingredients for the perfume formula. In late August 2018, Leguéreau traveled to the town accompanied by Olivier Poge, the House perfumer, to witness the jasmine harvest. «I wanted to smell, touch and view the raw materials found in the flower fields: the flowers, the dirt, the elements that make the perfume complex. It was an opportunity to learn about Olivier Poge’s creative process», he shares. «We wanted to express the fluidity of the perfume in the metal and stonework».

The octagonal shape is rendered in rock crystal or in diamond-paved white gold, Crystal pieces. It is even further celebrated in the construction of the cocktail rings, whose goldwork replicates facets. The black seal with the double C logo that covers the neck of the perfume bottle, at the base of which the stopper sits, is conjured by a single circle or bead of onyx, Ribbon and Diamond pieces. Little white pearls and round brilliant-cut diamonds dot the ajouré version of the stopper for the Bubbly pieces.

From its silhouette with trompe l’oeil droplets of perfume, yellow sapphires, bubbling in and cascading out, to the compositions playing on the gradient between white and yellow diamonds – set in either white or pink gold to accentuate the transition from one to the other – «every creation stems out of an idea; and the gemstones are there to serve that idea, not the other way around. This means that we adapt the gems to the design, the satellite gemstones in order to allow unlimited creativity», Leguéreau observes. There, the bottles melt into abstract floral tassels or strands – the evocation of perfume and its botanical ingredients.

This theme is defined by using specific goldwork and stone settings to achieve the idea, as seen in the Eternal Brooch made of tapered baguettes set on curved rails for the top of the digit, which morph into a duo of round diamonds, which in turn merge into a sea of snow-set brilliants as one progresses down the bottom loop of the number five. For the Eternal pieces, a frenzy of diamond cuts is prevalent, as if someone had shaken together a multitude of marquise, round, pear and emerald-shaped diamonds, flinging them out like a throw of the dice into random rows. The number five, and the 10.03-carat D FL Type IIa diamond above it, are the figurative components in the Eternal Neckpiece. In the Knotted N°5 creations, the digit is an extension of the bow, whereas it is paired with a rippling effect for the N°5 Drop pieces. «The pieces that are created around the number five bear a couture look; that is why, in some renditions, the number five turns out to be a ribbon. This encapsulates the freedom of movement with which I initially sketched the number five on paper».

Grasse – the city of perfume

With an emphasis on Grasse, the city on the French Riviera famous for its perfume tradition, garlands of blooms in various sizes are set with white diamonds in yellow or white gold. The May Rose series is inspired by Rosa Centifolia, whose lushness is rendered by staggered and creased gold leaves, some set with precious gems on the sides. The base of each leaf is set with pink sapphires, from dark to pale, and this suggests burgeoning colors. Each rose from the ring, brooch and medallion of the necklace is set with a D color Flawless or Internally Flawless diamond in its center, while little white pearls have found their way onto the flanks of the ring.

The N°5 perfume is a blend of various flowers – rose, ylang-ylang, jasmine, lily of the valley and iris, layered over a warm, woody base of vetiver, sandalwood, vanilla, amber and patchouli – and here this is represented by warm Mediterranean tones of red, orange, pink and yellow, by rubies, topaz, spessartite garnets and yellow sapphires. The Golden Burst, Golden Sillage and Blushing Sillage series represent the stages of how the perfume trail goes from strong to evanescent. Case in point with the latter, its profusion of colored gems and use of ajouré conveying the way perfume droplets are suspended in the air. «It was made using conventional joaillerie techniques, the emphasis being on the harmony between the pattern, colors and shapes. For the initial sketch for this theme, I used liquid ink of orange, red and yellow that I had not used for a while and found suitable for the concept, as the idea of drops applies similarly to a drop of ink and a drop of perfume», Leguéreau says. This correspondence between the idea and the finished item becomes even clearer when placing any of the Blushing Sillage pieces on top of their foundation sketch. Credits go to the Maison’s gemologists for sourcing the matching camaieu of colored stones. «If you think of it, perfume and jewelry share the same attribute: they are worn directly on one’s skin».

To celebrate 100 years of Chanel N°5, Chanel has partnered with writer and novelist Pauline Dreyfus creating a publication that reveals the history of the iconic perfume. Presented in two volumes: one on the early years of Chanel N°5 – from 1921 to 1945 – the other on the period when the fragrance became truly international – from the post-war period to the present – Chanel N°5 investigates the evolution of its packaging, composition, production and image through an in-depth research in the CHANEL archives.

The book also features the world’s top creatives who have lent their talents to the fragrance’s advertising campaigns, from photographers such as Richard Avedon and Helmut Newton to directors such as Ridley Scott and Baz Luhrmann, to the muses – Gabrielle Chanel herself, but also Suzy Parker, Catherine Deneuve, Nicole Kidman, Gisele Bündchen, Lily-Rose Depp and Marion Cotillard.

In 2009, Patrice Leguéreau joined Chanel as director of the Parisian brand’s Fine Jewellery Creation Studio. Since his appointment, Chanel’s jewellery has been drafted on black tracing paper.

Writer and novelist. Her award-winning works of fiction include Immortel, enfin, which received the Prix des Deux Magots in 2013, and Ce sont des choses qui arrivent, which won the Prix Albert Cohen in 2015. She is also the author of a biography of Paul Morand, which won the Prix Goncourt de la biographie 2021.