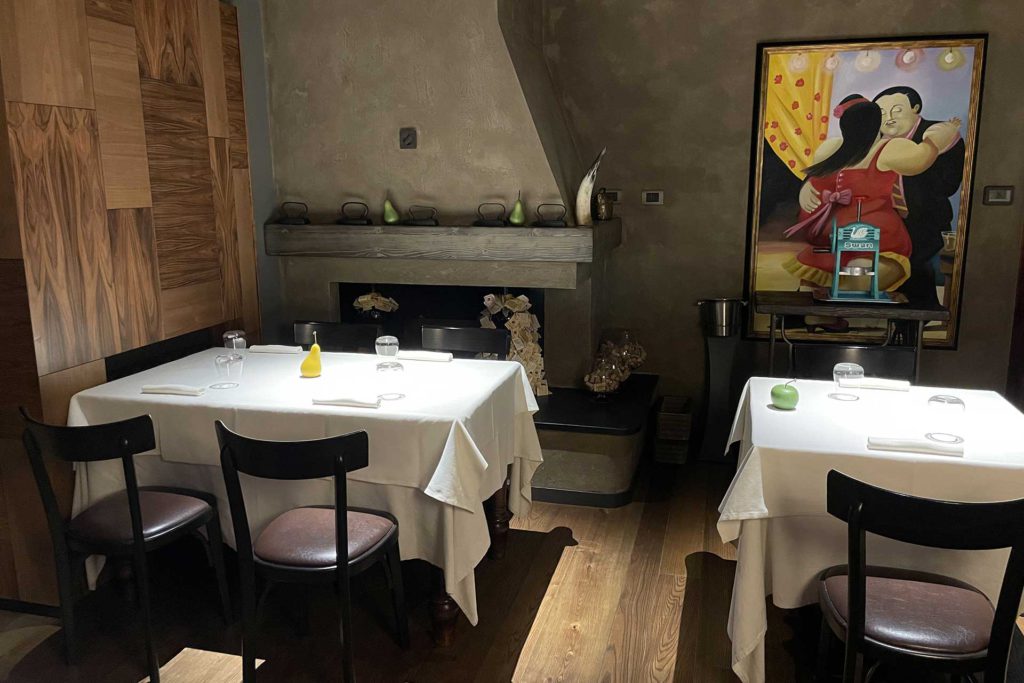 Osteria Magenes, Gaggiano. Just outside Milan in the town of Barate 80 inhabitants and the ancestors of Pope Francis

A gourmet restaurant hidden in the Parco agricolo sud – the tourism potential of this area and the complexity of creating a system. A neighborhood that could become a district of Lombardy’s capital city

The town of Barate in the Parco Agricolo Sud

To reach Barate, a small town of eighty inhabitants in the Parco Agricolo Sud of Milan, there are two ways: the Strada provinciale 203 and Via Cavour, both narrow country roads. When two cars driving in opposite directions meet, one has to pull over on the unpaved road to let the other pass. Yet, for the past ten years or so, there have been people driving hundreds of kilometers to Barate – four houses and a church – in search of a restaurant: the Antica Osteria Magenes.

«The last person to run the butcher shop was my great-uncle, my grandfather’s brother: he closed a few years before I was born», says Diego Guidi. «I grew up inside the bar. However, even with the closure of the butcher shop, the culture of cooking in the family has always been high, with an in-depth knowledge of raw materials and wines. This is also because my grandfather was a well-known cattle dealer who worked nationally». At the time of Diego’s birth in 1980, only a few inhabitants lived in the village. «Back then Barate was an attractive place, but with the creation of the big roads it has been less and less so. In the last ten years there has been a strong return to these places in other forms than in the past. There are people who come by bicycle from outside to enjoy nature: when I was young you didn’t see any».

The restaurant, which has existed since 1890, was initially a butcher shop that also served food. At the end of the seventies of the twentieth century it became a bar as it is found only in small towns: more a center of aggregation than a commercial exercise. Handed down from father to son, in 2007 it came into the hands of Diego and Dario Guidi, who transformed it into the current restaurant, with high-level Lombard cuisine and contemporary experimentation. Dario Guidi, born in 1987, worked for a year and a half in the kitchens of Al Pont de Ferr, where his mentor was Uruguayan star chef Matias Perdomo. At Antica Osteria Magenes you can choose from classic Milanese cutlet and risotto to tacos with boiled meat salad, guacamole and misticanza. There are three tasting menus: ‘Milano ritorno al futuro’, a mix of Milanese tradition and ironic innovation, ‘Mini Gioco’ and ‘Il Gioco’, both surprise menus. In ‘Milano ritorno al futuro’ – 70 euro – appear: deviled duck hearts, celeriac, naviglio cactus and roasted corn; ‘Uè testina’: Calf’s head, pink shrimp, grapefruit and brava sauce; Mondeghili and house special sauce; Filoni, vichyssoise, truffle caviar, muscovado crumble and sea fennel; Rice, milk, capers and licorice; Jambonet of frogs, parsley, garlic, yuzu and miller’s sauce; Brains; UOVO not UOVO: primordial tart.

A network of restaurants in the Parco Agricolo Sud

Today, customers come from all over Italy, but the Guidi brothers have had to win them over one by one, since they do not have a pre-established territorial and tourist system behind them. Institutions haven’t helped much.

«We could create a system because there are many attractions: from the nearby abbey of Morimondo to the Navigli. Something has been created, but only at an embryonic level». The area has tourism potential: «Just think of the many people who ride bikes, which have increased in recent years, without specific investments or projects to incentivize their presence. Years ago a wonderful initiative was organized: people left from the Darsena of Milan by boat, arrived in Gaggiano and here they took their bicycles or the carriage, made a tour in the countryside, and stopped at our restaurant. It was a beautiful and popular event, but those who ran it at one point raised the prices and nobody signed up anymore». In less than an hour you can get to Barate from Milan by bike.

Parco Agricolo Sud Milan Over the last twenty years the production of quality food and wine in the Parco Agricolo Sud has increased: the tourist offer could also leverage on this. Many suppliers of the Antica Osteria Magenes are local. For example, the Besuschio pastry shop in Abbiategrasso: six generations of pastry chefs, active since 1845. Some meats are supplied by local butchers. Small beer producers such as Cascinazza in Buccinasco, the first Italian microbrewery run entirely by monks. Flour and eggs are supplied by Mulino delle Umiliate in Rosate. Carnaroli rice comes from the Riserva San Massimo, in Groppello Cairoli, province of Pavia, an area of over 800 hectares in the Ticino Valley Park. Saffron comes from various small Italian producers, mainly from Sardinia and Abruzzo, but also from Lombardy, for example from Cascina San Donato in Abbiategrasso. In 2010, the Guidi brothers’ restaurant won the award for the best yellow risotto in Italy. «We buy raw materials from all over the world, but being able to rely on local producers often makes all the difference».