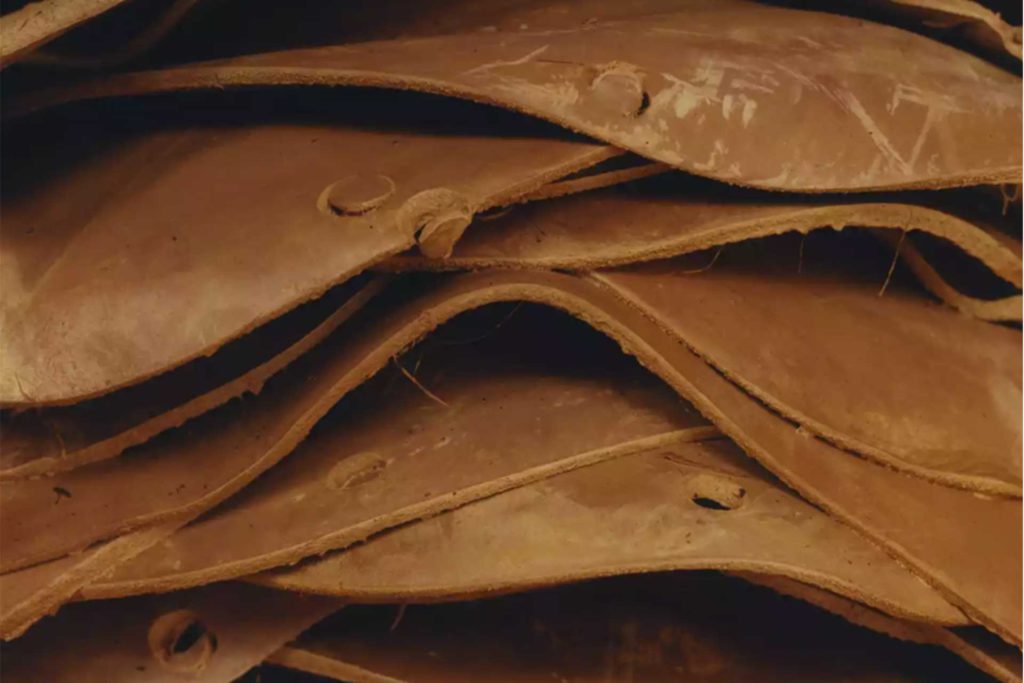 A case study for Hermès: After two centuries below the water, an historic leather, reemerges preserved

Acquired by Hermès in the Nineties, bundles of hardwearing Russia leather from the cargo hold of the Metta Catherina survive two centuries below the water for closer study

Legend tells the story of a Cossack whose boots rubbed against the bark of native birch trees as he rode in the steppes of Eastern Europe, incidentally waterproofing them. Produced by Russian artisans from the seventeenth until the twentieth century, Russia leather — an invention of ‘chance’ — was made from calf, reindeer and occasionally horse, sheep and goat hides, immersed in baths of tree bark liqour and greased with birch tar oil to achieve a leather that, though soft to touch, was of superior tensile strength — hardwearing, waterproof and insect repellent. Preferred by luxury makers and aristocratic travelers, Russia leather was a prized commodity of Imperial Russia’s trade with the West: of great transatlantic travel, the Tsar’s trunk upholstery and soldiers boots. With its cross-hatched grain, red-brown tone, and distinctive aroma, it became fashionable in the high societies of Paris and America before fading into obscurity with the Russian Revolution.

Founded by Thierry Hermès as an equestrian harness, saddlery, and leather goods workshop in 1837 — a time in which Paris was still greatly influenced by the elegance and refined society of Russia’s bourgeoisie — at the core of Hermès, much like Russia leather, is design for longevity and repair — values that resonate with the greatest challenge of our time: sustainable production. Using the finest materials and craftsmanship, Hermès encourage consumers to commit with equal vigor to the investment of pieces that will last a lifetime to become collectible objects that can be passed down the generations.

In 1973, the Plymouth Sound BSAC diving team discovered Die Frau Metta Catherina von Flensburg — a Danish double-mast brigantine ship which initially set sail from Saint Petersburg for Genoa in 1786. Carrying a 106-tonne hold of hemp, a few glass and fine china items, and bundles of historic Russia leather, it was hit by a storm and later sunk thirty meters below the surface at Raveness Point, in Devonshire. Belonging to the waters of the Duchy of Cornwall, the wreck and its cargo were generously gifted by Prince Charles to the BSAC. Under the leadership of Ian Skelton, the Nautical Archaeology Section of Plymouth Sounds BSAC retrieved — from the hold of the Metta Catherina — the last known Russia leather in existence.

Despite two centuries submerged in water, the inner rolls remained preserved in such fine condition that they further elevated the legendary status of the leather. With proceeds from their sale providing funds for the further recovery of the wreck and its artifacts, in the 1990s Hermès acquired bundles of the Russia leather as archaeological curiosities for closer study. As creators of objects, Hermès recognized their responsibility in the ethical and sustainable management of resources and, as such, in 2012 the Maison approached Élise Blouet, a French leather conservator-restorer, and Andrew Parr, the Managing Director of J. & J.F. Baker — the last remaining Tannery in England to treat hides with oak bark production techniques — to embark on a research project that would revive the lost art of Russia leather.

Located in Devonshire, England, J. & J.F. Baker was established in 1862 and is recognized, after five generations of family ownership, as an ancestral supplier to exclusive shoemakers, saddlers, interior designers, and leather workers. Widely practiced until the nineteenth century, J. & J.F. Baker continue to preserve the traditional craft of oak bark tanning. This long and gentle process occurs over twelve to fifteen months, calling upon natural products and sustainable processes to produce luxurious and hard-wearing leather, avoiding the careless production of harmful effluents or waste by-products that are difficult to dispose of.

Oak bark is procured from sustainably coppiced trees grown in Cumbria, England, and dried in a warehouse for three years before being ground in the bark mill — a 400-year-old mechanism run by a water wheel. The ground bark is then soaked in water from the River Coly, producing weak to strong bark liquors that are pumped into the tanning pits. Choosing local calfskin hides from free-range, low-impact farms within sixty miles of the tannery, J. & J. F. Baker «take a by-product of the sustainable meat industry and turn it into something beautiful». Upon arrival, the raw hides are soaked in pits of Lime to prepare them for dehairing, after which each hide is inspected and cut into Bellies, Butts, and Shoulders. Suspended on wooden poles and gently washed in oak bark tanning above the tanning pit for three months, the hides are moved constantly by a tanyard ‘agitation’ mechanism — also powered by the water wheel — to gently raise and drop the frame of wooden poles, ensuring an even tan. Layered with ground oak bark between each piece, the hides are then left to soak in bark liquor for a further eight to nine months.

This process requires neither electricity nor non-renewable energies. Instead, century-old mechanisms take intensive labor and skilled engineers to run and keep in working order. Many are irreplaceable with parts no longer in production, and as such de-commissioned machines remain on-site for parts and spares. Up until this point, the entire process is carbon neutral. After the tanning pits, the hides must be dried in the drying shed. As a result of J. & J. F. Baker’s self-funded research and development program and investment in a waste-to-energy disposal system, the drying shed is heated by a biomass boiler and powered by the incineration of the companies waste products — excess hair, fat and offcuts from the hides — reducing the gas required for the conventional boilers that run alongside it. Although J. & J.F. Baker already pump water waste into soak-aways for filtration and compost spent bark for gardening, it also wishes to move away from fossil fuels by adapting its working water wheel to produce renewable electricity. With time and investment, it plans to power the entire tannery with electricity produced onsite.

For finishing touches, before the hides are hung to complete the drying process, the return to carbon-neutral processes see the hides handset to remove unwanted creases, hand-stained to their desired shade, and — once level and fastened — hand-finished by expert curriers. Nourishing dubbins of natural oils, fats, and greases are specially blended on-site to enhance the leather’s intended function and strengthen its natural fibers. Left to soak into the leather for a week, the waxy coating can finally be buffed away with a soft-bristled brush.

As a consultant for Hermès, Élise Blouet — whose restoration workshop in Orne focuses on researching ancient leather manufacturing techniques — studied ancient texts dating back to 1663 to reveal what little is known about the tanning techniques and naturally occurring materials available to the artisans of the original Russia leather. After five years of patient experiments by J. & J.F. Baker, they succeeded in reviving the lost recipe of historic Russia leather, which Hermès has renamed Volynka leather.

Handpicking the most premium calfskins, each hide is soaked in a tanning pit of oak, willow, and birch bark: endemic tree species of the Moscow region — the birthplace of Russia leather. Dyed and printed with the characteristic cross-hatch, the leather is hand-finished by curriers with natural birch tar oil — the secret ingredient that gave Russia leather its hardwearing qualities and instantly recognizable aroma. As a process led by the senses, experts can confirm the authenticity of the smell, look and feel of J. & J.F. Baker’s Russia or Volynka leather. Documenting the project in Cuir de Russie, mémoire du tan, which was published in French by Editions Monelle Hayot, Blouet was given exclusive access to the private collection of the Émile Hermès Museum at the brand’s Rue du Faubourge Saint-Honore store, in Paris. Examining the historical artifacts and precious treasures of Hermès’ private collection, Blouet lent on the expertise of Mark Sholtz, the Museum’s Director, who offered, «the house of Hermès is known for its ability to tell stories» — a tradition which now includes the legend of Russia leather.

‘Hermès in the Making’ — A Travelling Event

Used by Hermès for its Spring-Summer 2018 leather goods collection, three Hermès bags and an Ulysse notebook cover are proudly constructed from Volynka leather. The Haut à courroies is a trapezoid-shaped bag with side straps, short handles, and a rigid flap that stands firmly on small brass studs. Introduced in the early twentieth century, it transformed from its equestrian use to the ideal travel bag with the arrival of the automobile. The Bolide voyage — a round-angled bag with a zip fastener introduced in the Twenties — and the Plume voyage — a featherweight bag introduced in the Sixties — also have in common their vocation for top drivers and long-distance travelers.

Recently presented at the ‘Hermès in the Making’ event at the Danish Architecture Center in Copenhagen, esteemed artisans from ten of Maison’s métiers — including leather makers, a saddler, and a silk printer — share exalted materials, tools, and techniques involved in the preservation and development of the Maison’s historic savoir-faire. From Kaolin, stone, and straw to leather, silk, and horn, the ‘Hermès in the Making’ event — much like the process of tanning — is led by the senses.

Presented on a playful workbench in Hermès’ idiosyncratic ‘house of objects’ style, Volynka leather products sit within the context of live demonstrations, interactive workshops, and the Footsteps across the World film collection by documentary filmmaker Frédéric Laffont; an exploration of the humanistic perspective of Hermès’ unique relationship to sustainable development throughout the world. Having departed from the Danish Architecture Center following 24th October 2021, ‘Hermès in the Making’ will travel to further cities worldwide in 2022. With durability as a central function of their beauty, Hermès’ Volynka leather, voyage bags, and traveling events are an invitation for the return of travel and great transatlantic adventure.