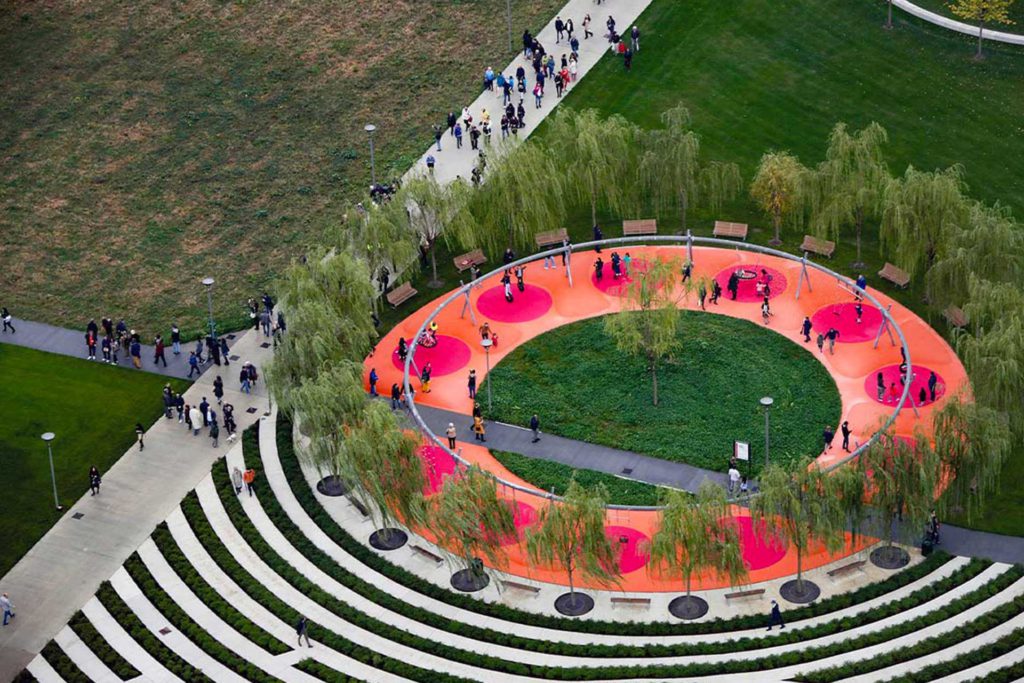 The vision of becoming a sustainable city requires a mind-shift, one where we omit carbon-saturated means of living and opt for more sustainable solutions. The initiatives that the capital has enforced moul a younger generation that will grow up healthy and active, respecting the natural environment. The Mayor of Tirana himself, Erion Veliaj, has said ‘don’t underestimate the power of children. A city for our kids is a city for all’.

We are part of a network of cities that are committed to being child friendly through the Urban 95 concept. It entails how the city looks from the perspective of a healthy three-year-old who is typically ninety-five centimetres tall. In the last fifty years, Tirana and almost all megacities in the world have been built to serve the active working adult; always on the rush with no time to waste moving quickly from A to B. Such design does not work for most people like children and the elderly. If you build from the perspective of a child, then you build a city that works for all – no one excluded. A high priority is the Orbital Forest for Tirana, composed of several elements: green and blue corridors along the rivers for the increased resilience against flooding and an overall improvement of water management; progression of pocket forests in the largely urbanised areas to improve both the quality of air and the aesthetic value of these neighborhoods; regenerated soil quality in depleted areas by introducing the culture of planting fruit forests; and lastly, the enhancement and preservation of biodiversity, creating a natural oasis close to the lakes making them natural reserves that can in hand be aesthetic recreational areas.

The Donate a Tree campaign

The campaign started from a little girl’s request to plant a tree for her birthday. Since then, everyone wanted to plant trees, either for a birthday or just to do their part for the city. Sooner or later people will follow you if they see that what is being done benefits their quality of life and wellbeing. Initially, when we built the first forty-kilometre bike lanes there was a lot of resistance – people were afraid to cycle as the city had been bike-unfriendly for many years. By continuous investing in bike infrastructure and developing a cycling culture for the youth, and a bit of help from the pandemic, we have seen bikers triplicating. In the General Local Plan, Tirana 2030, we developed the strategy for a polycentric Tirana, where services and shops can be better distributed. This strategy aims to increase walkability and cycling – thus, enabling the creation of a fifteen-minute city. Therefore, in addition to improving public transportation and infrastructure – by developing clean and electric public transport with our first Green Line  of a one-hundred percent electric bus fleet – we are developing the Minimum Bike Grid, which  is about ninety kilometres. Our efforts go to the education of citizens, children, and youth for  the development of a proper biking culture. The notion that there can’t be unlimited growth on a finite planet is becoming more real to us, some suggest that nature provides enough for everyone on this planet but the distribution is uneven. Others disagree and suggest that our options are limited and that we should change the system completely if we want to survive. Is truth in both these statements: in order to change something, you need to understand it first and I am not sure everyone understands the implications of their actions onto the environment and onto their own health. We can become more responsible consumers or entrepreneurs with constant education and awareness – that way, it becomes a matter of culture. The rise of the pandemic has led to a plummet in carbon dioxide emissions; which is the largest yearly change recorded in worldwide emissions. Although, knowing human nature, one might think that things will go back to normal like before, I don’t think that is entirely true. I say this because I see myself how the green agenda has been put into focus by policy-makers all over the world. We saw cities investing in health infrastructure, biking lanes, public parks and allocating more money to rebuild greener cities. The thing about globalization is that each day you learn about what cities, businesses and communities from the farthest corners of the world are doing and that can influence your way of thinking.

The National Park movement aims at making the city of London the first National Park City with a net zero-carbon by 2050. Deputy Mayor, Shirley Rodrigues is working on delivering the vision of a greener, healthier and more sustainable and biodiverse city through the London Environment Strategy. In accordance with the National Park City Foundation, nature will be conserved much like any other national park, promoting green spaces that will in turn benefit the citizens’ health. London has become a key reference for other heavily urbanized cities aspiring to take the same course of action.

The challenge for London in 2020 is to ensure that the city’s recovery from the pandemic is a green and prosperous one, a rapid recovery and a green recovery are not mutually exclusive. The Mayor of London, Sadiq Khan’s Green New Deal for London, is about supporting the green industries that are crucial to meeting our city’s climate targets. This would drive industrial and regional policies that tackle the climate emergency whilst delivering jobs and stimulating economic activity. We have a once-in-a-generation opportunity.

The Mayor is encouraging more people to walk, cycle and use public transport, with a target of eighty-one percent of all trips undertaken using sustainable modes of transport by 2041, investing in cycling infrastructure and improving public transport to make this a reality.

The key is to focus on actions that improve the quality of life for Londoners by addressing social and economic inequalities. It will result in accelerating the retrofitting of homes and buildings, supporting renewable energy projects, helping businesses reduce or reuse food, plastic packaging or textiles waste, creating and improve our green spaces, and accelerating electrification of the bus fleet. Adopting this approach has already successfully generated UK jobs and helped secure the UK’s position as a global leader towards zero emissions. In terms of creating a greener city, London is already considered to be an urban forest, with about twenty-one percent of London’s land area covered by tree canopy and an estimate of about eight million trees. We want to increase this area by 10 percent by 2050 adding another 3,000 hectares of canopy.

This is because of the benefits that trees bring – storing carbon, improving air quality, providing shady cool spots, and reducing flood risk – that will only become more important as the climate gets hotter. Our research has found that London’s trees provide over £133m benefits to Londoners each year.

This means planting more trees in all areas of the city as part of a network of green infrastructure, including rethinking our parks and open spaces to create new urban woodlands, creating shade and making streets more pleasant, especially in areas where tree cover is currently low, and even supporting Londoners to plant trees in their own gardens.

Milan, a forestial city in the making

Forestami’s Scientific Director, Maria Chiara Pastore, walks us through the details of what goes on in the project and its goals in depth. Milan is to plant 3 million trees by the year 2030.

The project started with the aim of tackling air pollution and the rising effects of climate change within the Città Metropolitana – having in mind that we need to make a change in our environment, reconsidering nature as a structural part of our cities. Through satellite images and several site visits, we now know that in Città Metropolitana, 16 percent of the total surface is occupied by trees including both public and private areas, contributing to shading, cooling, and cleaning the air. We have been discussing with the different municipalities – the whole area includes 133 municipalities – to involve them in the Forestami project. As of September 2020, we have been able to collect 153 different areas, ready to be planted. But the first thing we need is to raise awareness and environmental sensitivity. This is why we are working with schools – to educate children towards tree caring as well as fostering strong campaigns that explain why we need trees in our cities and in our lives. For centuries, cities have helped foster mankind’s ideas, therefore, it is no stretch of the imagination to believe that cities will now take the lead in addressing climate change, driving global action. Milan is undertaking efforts into being one of the leading urban planning scenes in Europe by developing kilometres of cycle paths and green areas. With Forestami one of the challenges to be addressed is to change the way we think of our cities and to consider that every place, with the appropriate changes, can host nature. A project such as this needs to have everybody on the trees’ side. Therefore, we have been discussing with farmers, landowners, members of environmental associations as well as private companies in order to find suitable homes for the trees, and possibly financers for tree planting and maintenance campaigns. It is not just about planting trees, you need tree nurseries – people to plant and maintain, as well as people that actually design and believe in the project. It is a strategic element in our economy to be developed, that will attract the city’s future investments.